What’s Piercing Through the Clouds Above Jerusalem? 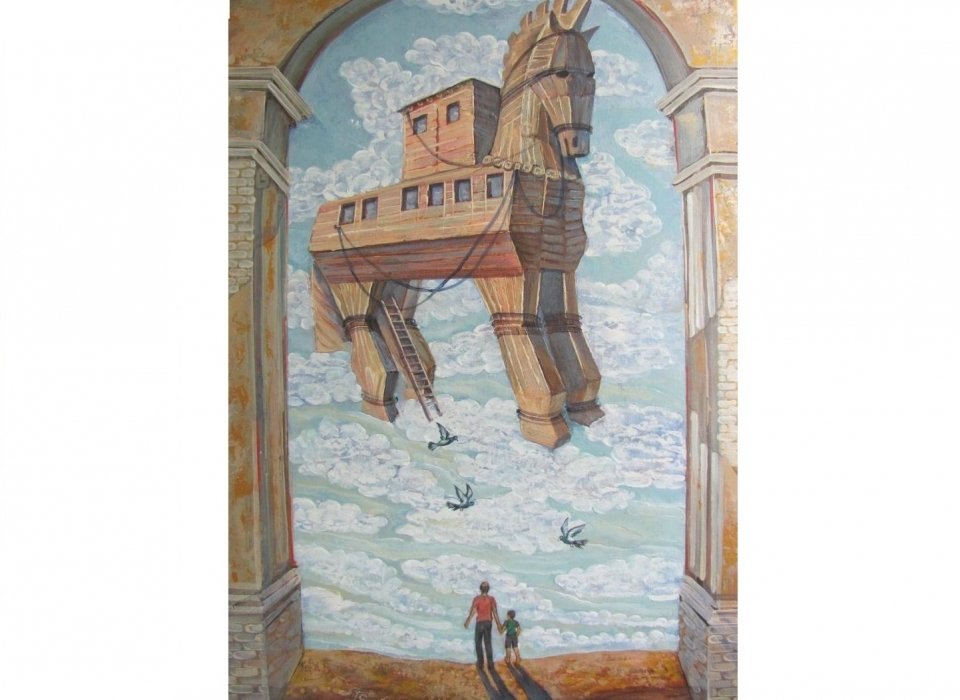 Is it a plane? Is it a bird? No! It’s a Trojan Horse filled with super men and women hovering above Jerusalem. They’re waving at the multitude with smiles. Wait! They’re ALL Arabs.  Amazing! Am I dreaming?

In ‘This is What Mideast Peace Looks Like,’Avi Shilon does suggest:

“in contrast to the organizing principle of the Oslo process, which was that the diplomatic dimension – i.e., an arrangement with the Palestinians – would lead to cultural coexistence, this time the cultural dimension preceded the diplomatic solution as a bridge to peace.”

“after Israelis get used to the Muslims from the Gulf, one can assume that the walls separating them from the Palestinians will seem unnecessary …”

Inevitably, Israelis will need to destroy their walls to meet and greet many of their 400 million neighbors. Inescapably, Israel-Palestine must someday become part of the grander landscape with open borders and freedom of movement. But reality dictates. Dizengoff Street in Tel Aviv feels more like the Bahnhofstrasse in Zurich than Tahlia Street in Jeddah. It won’t happen overnight. First, Israel-Palestine must democratically replace the ruling Neo-Party of the Pharisees.

Though the End of the Rainbow is vaguely in view, the facts on the ground seem bleak, reports Jonathan Cook from Nazareth, in ‘How Gulf states became business partners in Israel's occupation:’

“Since signing the Abraham Accords, the United Arab Emirates (UAE)and Bahrain have been actively colluding with Israel's settler movement and military authorities.

Israeli Yossi Dagan, head of the West Bank regional council that visited Dubai last month, declared that there was “no contradiction between our demand to impose sovereignty [annex large parts of the West Bank] and the strengthening of commercial and industrial ties” with the Gulf.”

Not so fast, signals HRH Prince Turki al-Faisal al Saud and former head of the kingdom’s intelligence serviceat the concluding session of the Manama Dialogue conference hosted by the International Institute for Strategic Studies, as reported by The Times of Israel’s Raphael Ahren in ‘Saudi prince: ‘Bully Israel Steals Land, Puts Palestinians in Concentration Camps:’

“Israeli governments have arrested thousands of the inhabitants of the lands they are colonizing and incarcerated them in concentration camps under the flimsiest of security accusations — young and old, women and men who are rotting there without recourse or justice,” said Turki al-Faisal al Saud at the session, also attended by Israeli Foreign Minister Gabi Ashkenazi.”

“They’re demolishing homes as they wish, and they assassinate whomever they want to. And yet, the Israeli Knesset passed a law that defines Israel's citizenship as exclusively Jewish, denying the non-Jewish inhabitants of Israel equal rights under the law. What kind of democracy is that?”

He portrayed the country as a bloodthirsty neighborhood bully that has always trampled all international norms and standards.

The Saudi Prince said that while Israeli leaders often describe their country as existentially threatened, it is a mighty nation with a massive nuclear arsenal that regularly engages in “willy-nilly” military exploits in Syria, Lebanon, and elsewhere.

“Offering friendship to the kingdom of Saudi Arabia has not stopped successive Israeli governments from unleashing their political minions and their media hounds from all countries to denigrate and demonize Saudi Arabia,” the Prince said.

He cited Saudi King Salman and Crown Prince Mohammed as repeatedly saying that a two-state solution, with East Jerusalem as the capital of Palestine and a “fair solution” for the Palestinian refugees, was “the only peaceful option for all of us.”

Saudi Arabia has insisted that any normalization between it and Israel can only happen alongside a lasting peace deal involving a two-state solution to the Israeli-Palestinian conflict. The kingdom publicly continues to state its unwavering support for the Arab Peace Initiative, a 2002 Saudi-sponsored deal that offers Israel full ties with all Arab states in return for Palestinian statehood on territory Israel captured in 1967.

“You cannot treat an open wound with palliatives and painkillers,” the Saudi royal said.

“The false accusations of the Saudi representative at the Manama Conference do not reflect the facts or the spirit and changes the region is undergoing. I rejected his remarks and emphasized that the ‘blame game’ era is over. We are at the dawn of a new era. An era of peace.”

Who is dreaming? One wonders what Ashkenazi is smoking. On the horizon, I see Israelis welcoming a Trojan Horse, packed with Arabs, armed with the power of words.

Read more: ‘This is What Mideast Peace Looks Like.’

With Every Good Wish to You,I am,

A Theo-geopolitical eye-opener expounded with conviction, common sense, and compassion. With 500+ references, 'Christian Zionism … Enraptured Around a Golden Calf' pits the Holy Trinity of Zionism – One Tribe, One Land, One God – against the Holy Trinity of Christianity – ALL people, ALL nations, indeed, glorifying the one 'I Am' with many names. 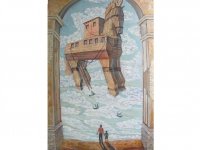