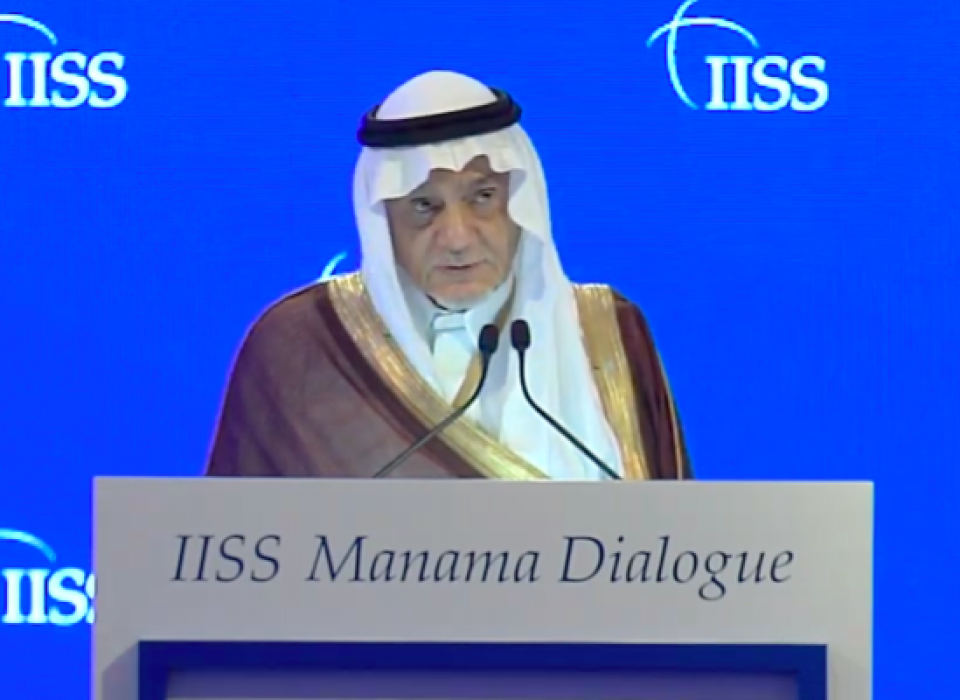 A Saudi prince and former senior government official on Sunday launched a blistering attack against Israel, describing the Jewish state as a belligerent and apartheid-practicing occupier, and saying that peace will remain elusive until the creation of a Palestinian state along 1967 lines.

“Israeli governments have arrested thousands of the inhabitants of the lands they are colonizing and incarcerated them in concentration camps under the flimsiest of security accusations — young and old, women and men who are rotting there without recourse or justice,” said Turki al-Faisal al Saud, the former head of the kingdom’s intelligence service, at panel discussion in Bahrain that was also attended by Foreign Minister Gabi Ashkenazi.

“They’re demolishing homes as they wish, and they assassinate whomever they want to. And yet, the Israeli Knesset passed a law that defines the citizenship of Israel as exclusively Jewish, denying the non-Jewish inhabitants of Israel equal rights under the law. What kind of democracy is that?”

He also lamented Israel’s construction of the West Bank security barrier, which he called the “apartheid wall.”

The Saudi prince, who until Sunday’s appearance had been thought relatively well-disposed toward Israel, made the comments at the concluding session of the Manama Dialogue conference hosted by the International Institute for Strategic Studies.

Al-Faisal led Saudi intelligence for more than two decades and served as the kingdom’s ambassador to the United States and United Kingdom. Although he currently does not hold any official position, his stance is seen as closely mirroring that of King Salman. In contrast, Saudi Crown Prince Mohammed bin Salman has signaled greater willingness to quietly engage with Israel to counter their common enemy, Iran, and boost foreign investment in the kingdom. 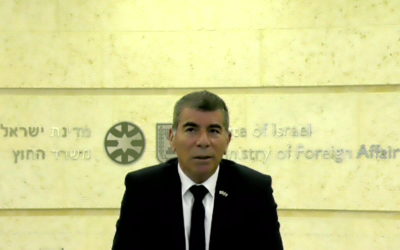 Ashkenazi, in his comments right after the Saudi royal concluded his opening remarks, briefly referred to Al-Faisal’s speech. “At the beginning of my remarks I would like to express my regret on the comments of the Saudi representative. I don’t believe that they reflect the spirit and the changes taking place in the Middle East,” he said, speaking via video from Jerusalem.

Ashkenazi later tweeted: “The false accusations of the Saudi representative at the Manama Conference do not reflect the facts or the spirit and changes the region is undergoing. I rejected his remarks and emphasized that the ‘blame game’ era is over. We are at the dawn of a new era. An era of peace.”

Al-Faisal began his speech by stressing that he was speaking in a private capacity, whereupon he launched a bitter tirade against Israel, portraying the country as a bloodthirsty neighborhood bully that has always trampled on all international norms and standards.

The Saudi prince said that while Israeli leaders often describe their country as existentially threatened, it is in fact a powerful nation with a massive nuclear arsenal that regularly engages in “willy-nilly” military exploits in Syria, Lebanon and elsewhere.

“Offering friendship to the kingdom of Saudi Arabia has not stopped successive Israeli governments from unleashing their political minions and their media hounds from all countries to denigrate and demonize Saudi Arabia,” he said. 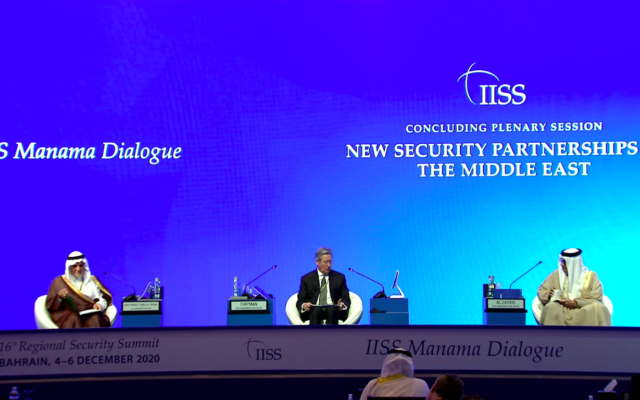 He cited Saudi King Salman and Crown Prince Mohammed as saying repeatedly that a two-state solution, with East Jerusalem as the capital of Palestine and “fair solution” for the Palestinian refugees, was “the only peaceful option for all of us.”

Saudi Arabia has insisted that any normalization between it and Israel can only happen alongside a lasting peace deal involving a two-state solution to the Israeli-Palestinian conflict. The kingdom publicly continues to state its unwavering support for the Arab Peace Initiative, a 2002 Saudi-sponsored deal that offers Israel full ties with all Arab states in return for Palestinian statehood on territory Israel captured in 1967.

Referring to the Abraham Accords — the normalization agreements Israel signed with the United Arab Emirates and Bahrain — the Saudi royal said, “You cannot treat an open wound with palliatives and painkillers.

“The Abraham Accords are not divine writ,” he added. For Saudi Arabia to join the agreement, he said, the 2002 Arab Peace Initiative, which calls for a Palestinian state along the 1967 lines, “must be implemented.”

Only once the Palestinian question is solved can Riyadh and Jerusalem join hands to confront their common enemy, Iran, he said in conclusion.

‘The Abraham Accords do not come at the expense of the Palestinians - they are an opportunity. I call on them to change their minds and enter direct negotiations with us without preconditions’ - @Gabi_Ashkenazi #IISSMD20 https://t.co/DrZiekXo26 pic.twitter.com/s9ZK7mxNZZ

Ashkenazi, who was initially scheduled to attend the conference in person but eventually postponed his trip to the Gulf, devoted most of his speech to the historic nature of the Abraham Accords.

“The agreements represent a new paradigm of peace. They symbolize the choice of a better future over the past, of agreement and consensus over disagreement, and of hope and promise over despair,” he said.

Ashkenazi mentioned the fact that Israeli planes are now flying to the UAE and Bahrain, noting that this would not have been possible without Saudi approval. “And we are very grateful for this support,” he said.

The Abraham Accords do not come at the expense of the Palestinians, the foreign minister said. “Quite the opposite. They are an opportunity that should not be missed,” he added, calling on Ramallah to enter direct negotiations with Israel without preconditions.

At the question and answer session that followed the speakers’ opening remarks, Al-Faisal, the Saudi prince, said that Israeli settlements in the West Bank were a deal-breaker and urged Jerusalem to “remove those settlements and then enter negotiations.” 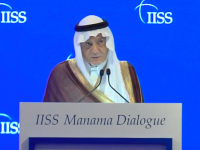