A moment of the sound of silence, a prayer for Russia

I am very much saddened to hear on the news that, once again the tyranny of ISIS has struck, this time on not just my home ground in Britain but also in Russia ... so this is my response.

Open letter from james bond to Mr. Vladimir Putin, The President of the Russian Federation

In the fight we must, win we must travel through a dark, cold tunnel of sweat and a lake of blood. War is never undercoated in reality with dashing heroes like Han Solo or Batman arriving to save the day (contrary to what some of my generation believe). It is cruel.it, heartless, and bloody.

Needless to say that is the reason I volunteered to be an agent for the security services, despite what C (my boss) has said, which could be down to the stress of his job. I think even the smartest amongst us have silly goofballs in what we say. That's what makes us human.

Just think nothing of it and focus on keeping your people morale high through the devastation caused by the violent sceptre of evi.l As long as we keep our hope and never show a dent, then we will have showed them that their objective has failed. No matter what opposition we face, we will face them united in spirit and in might as a band of brothers.

Oh one final thing I was wondering if you could extend a trade deal to Cwmbran, Wales my hometown, you see most of the foreign goods usually goes to London and other big cities and thus we lose out of the deal. Last year I met president Francois Hollande of France in order to achieve a similar response and then it pulled through, as a result more tourists came and the local economy boomed which created more jobs and put a clamp on drug gang culture.

I humbly await your reply to this yours in comradeship,

PS. I added a song to keep your peoples' morale high. 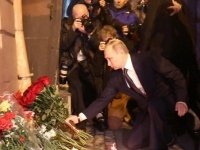