Who carries the flag for Palestinian liberation? Masked Palestinian youths at the funeral of a 13 year-old boy killed in clashes in Bethlehem. Some carry knives and stun grenades. “There is evidence that militancy is gaining traction, and Palestinian political stagnation has created a vacuum for disillusioned individuals or fringe elements to fill with violence.” Photo by Harriet Salem/VICE News

While the current path is likely to lead to continued occupation, settlement expansion, and further internal division, the strategic alternatives could unravel Palestinian institutional and diplomatic achievements, with no certainty of success. A coherent strategy is needed, along with a new generation of leaders that can stem the political ruptures and inject new life into Palestinian institutions.

The Carnegie Endowment for International Peace recently conducted a survey of fifty-eight selected Palestinian leaders in various fields. As expected, participants view the Israeli occupation and settlement activity as critical impediments to Palestinian sovereignty. However, they are equally disturbed about internal and social divisions. In particular, the West Bank–Gaza split is seen as a massive barrier to fulfilling Palestinian aspirations.

A majority of respondents are pessimistic about the future and believe that the two-state solution is no longer viable. Youth are especially inclined to believe the Oslo Accords have not served Palestinian interests, and a significant number view armed resistance as a more effective method for advancing Palestinian nationalism. Carnegie also found a dwindling faith in Palestinian political institutions. Meanwhile, there is a growing focus on the importance of civil society and educational institutions.

In recent decades, most Palestinian national institutions have been organized around the assumption that they would eventually assume control of a sovereign state. But with Palestinians increasingly sceptical of the two-state solution, alternatives have emerged as plausible paths forward. Each has shown signs of percolation among grassroots actors, but none enjoys, nor is likely to enjoy, the full backing of the Ramallah-based leadership.

Binationalism. Public support for binational proposals, in which Palestinians and Israelis would share a single state, remains relatively low; and advocates have yet to articulate a viable strategy to achieve that vision. However, given the emerging Palestinian demographic majority between the Jordan River and the Mediterranean Sea, binational options may become more appealing in the years ahead.

Rights-based approaches. There are indications that approaches seeking greater legal protections for Palestinian human and civil rights are gaining traction; they encompass various measures and tactics—from the Boycott, Divestment, Sanctions movement to international legal instruments to nonviolent resistance. But a sustainable civil disobedience campaign would be difficult to organize and could spin out of control without a national consensus, energetic leadership, and strong discipline.

Armed resistance. Armed resistance, which is seen in Israel as synonymous with terrorism, is the most radical approach. The second intifada left thousands dead and was catastrophic to Palestinian aspirations. However, there is evidence that militancy is gaining traction, and Palestinian political stagnation has created a vacuum for disillusioned individuals or fringe elements to fill with violence.

Palestinian political and cultural identity and the perceived ideal of Palestinian unity still seem to resonate strongly, but the Palestinian people are dispersed both politically and geographically, complicating institutional renewal efforts.
While the PLO is weak, Palestinian interlocutors consistently view the entity as vital, and many believe it is key to the rejuvenation of the Palestinian national project. The PA has been atrophying for the last decade and today struggles to provide public services and remain solvent. It has failed to cultivate a new generation of talent, and there are unmistakable signs of brain drain.

Fatah has lost its historical sense of mission and functions as a patronage network rather than a political party.

Palestinian factions, too, face daunting challenges. Fatah has lost its historical sense of mission after decades in power and functions as a patronage network rather than a political party. Hamas faces even deeper problems: the absence of strategy, its weakness in the West Bank and inability to govern Gaza, its failure to provide a genuine resistance option, and its status as an international pariah.

Fatah and Hamas have agreed, with Western support, to a de facto partition of Palestine, which has allowed each to become deeply entrenched in its respective territory. There is a strong view among Palestinians that this rivalry divides the Palestinian people and has contributed to the decline in their institutions.

While Palestinian factions have lost their ability to appeal to younger generations, the undercurrents that led to their creation remain a powerful presence in society. The formal structures that embody the Palestinian national identity are declining, but the identity itself remains strong.

Furthermore, there are signs of dynamism at the subnational level. Unions, student groups, and other civil society actors have exhibited vibrant internal politics and engaging younger leaders, who may be able to revitalize Palestinian politics amid a pending generational change in authority. 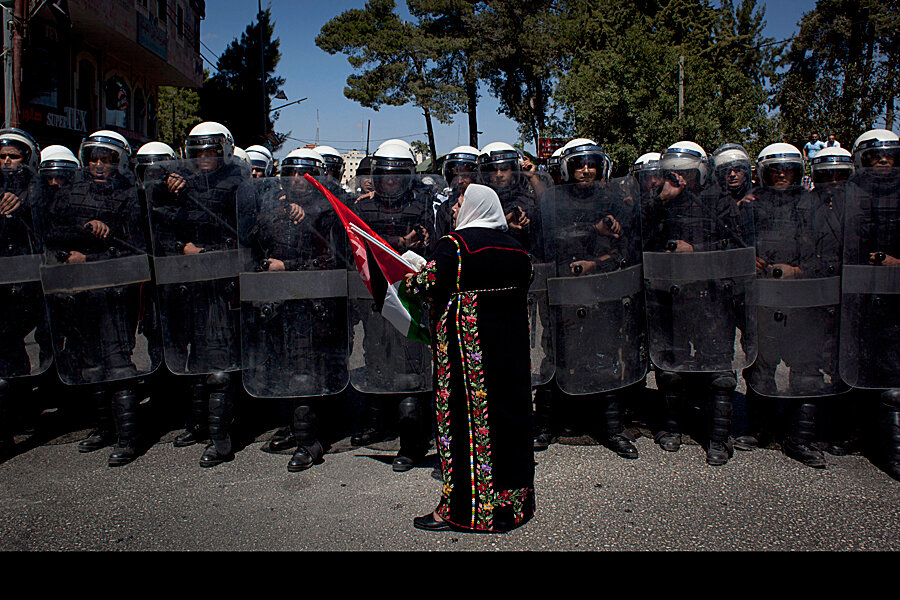 A Palestinian woman carrying national and Popular Front for the Liberation of Palestine flags face Palestinian riot police blocking the road during a rally in the West Bank city of Ramallah, September 2013. Nasser Nasser/AP 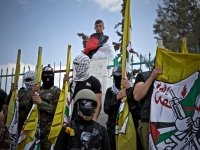