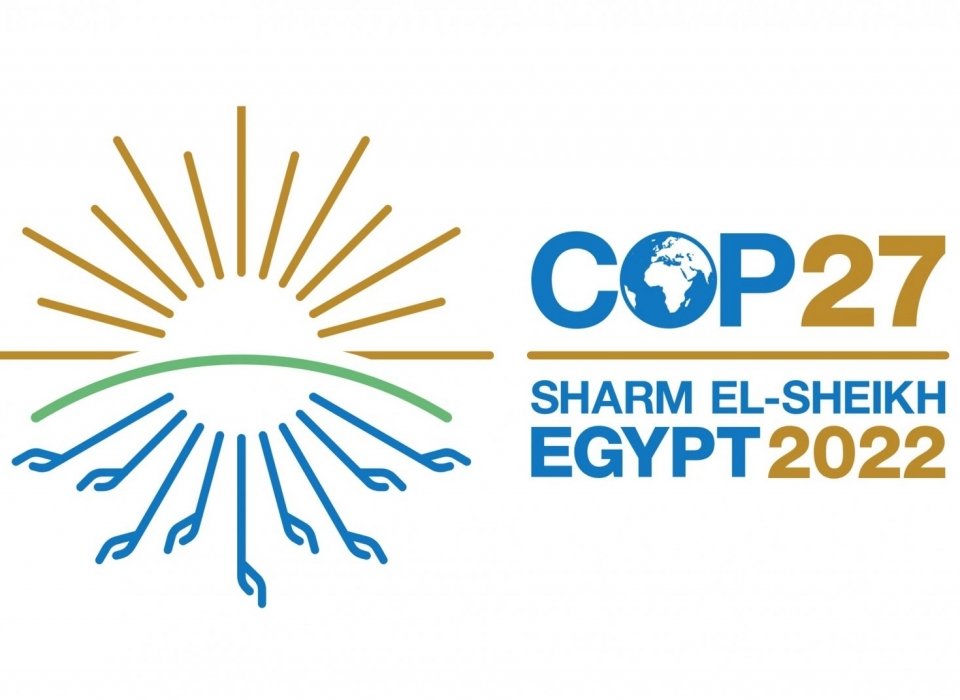 “To be an enemy of the US is dangerous, but to be a friend is fatal.”

“So, let’s reach out and take the future in our hands and make the world we wish to see and that we know we need — a planet preserved for generations to come.

Opportunities unlocked through innovation and cooperation that deliver equitable, more prosperous, and more stable, and more just world for our children.”

Remarks by the President of the United States, Joseph R. Biden, at the 27th Conference of the Parties to the Framework Convention on Climate Change (COP-27) | Sharm el-Sheikh, Egypt

Cape Canaveral, 18 November 2022 | If you know of any story that is decisive, tell the world. We're still searching.

Thank you, Mr. President, for your thoughtful remarks.

Would you consider helping the UK, the EU, and NATO fix the broken pipelines in the sea near Denmark and Sweden?

Russia is pumping minimal levels of gas (methane) through the pipelines to maintain the pressure that keeps the water from entering and ruining Europe’s lifelines to Russia’s gas.

On 30 September 2022, the estimated emission rate, as seen from its first methane concentration measurement, was 79,000 kilograms (174,000 pounds) per hour, which makes this the most significant methane leak ever detected from a single point source.

In a press release, scientists affirm that this amount of methane is equivalent to more than 90,000 kilograms (2 million pounds) of coal being burned in one hour.

Although methane partly dissolves in water and is not toxic, it is the second most abundant anthropogenic greenhouse gas in our atmosphere, causing climate change.

So, Mr. President, we have an ecological disaster in the making, one that had never been necessary. Please do what matters most to our planet now.

STOP THE METHANE FROM SPREADING FURTHER!

Thank you for your consideration.

PS. WHY NOT PEACE? Seven billion of the 7.8 billion of the world’s population concur that the EU-US/NATO Axis could have prevented the EU-US/NATO aggression against Russia that has prompted a proxy war between East and West. For most of us, it doesn’t matter who provoked or started the war. What matters most is who ends the war. Mr. President, let’s not incite Russia to carry out a Hiroshima and a Nagasaki. Don’t play Russian Roulette with our lives.

On 26 September 2022, leaks were discovered in the underwater Nord Stream 1 and 2 gas pipelines near Denmark and Sweden. Both pipelines are owned by Russia and were built to transport natural gas from Russia to Germany through the Baltic Sea.

Officials have said the leaks were caused by deliberate action, not accidents, and were likely intentional sabotage. While accusations have abounded, the motives behind the damage are not yet known.

Seismic disturbances in the Baltic Sea were detected, and officials said that while neither pipeline was transporting gas at the time of the blasts, they still contained pressurized methane, the main component of natural gas.

The methane has spewed out, producing a vast stream of bubbles on the sea surface visible from various satellites in Earth orbit. 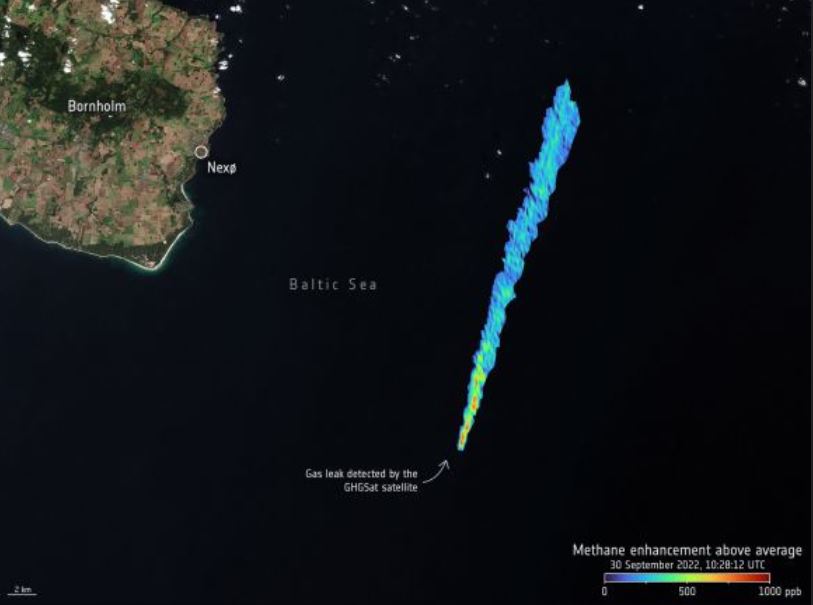 On 20 September 2022, a GHGSat observed the area of the Nord Stream pipeline break and saw an estimated methane emission rate of 79,000 kilograms (174,000 pounds) per hour. (GHGSat/ESA)

The private company GHGSat, which has active satellites monitoring methane emissions from space, turned their constellation of high-resolution satellites to measure the pipeline leak.

According to a European Space Agency release, GHGSat tasked its radar and microwave satellites to obtain measurements at larger viewing angles and was able to target the area where the Sun's light reflected the strongest of the sea surface – known as the 'glint spot.'

They found that on September 30, the estimated emission rate, as seen from its first methane concentration measurement, was 79,000 kilograms (174,000 pounds) per hour, making this the most significant methane leak ever detected by GHGSat from a single point source.

GHGSat said this rate is extremely high, especially considering this image comes four days following the initial breach, and this is only one of four rupture points in the pipeline.

In a press release, the company said this amount of methane is equivalent to more than 90,000 kilograms (2 million pounds) of coal being burned in one hour.

ESA said that "monitoring methane over water is extremely difficult as water absorbs most of the sunlight in the shortwave infrared wavelengths used for methane remote sensing. This limits the amount of light reaching the sensor, thus making it extremely difficult to measure methane concentrations over the sea at high latitudes."

Cloud cover contributed to the difficulty in making satellite observations of this event.

Although methane partly dissolves in water and is not toxic, it is the second most abundant anthropogenic greenhouse gas in our atmosphere, causing climate change.

"The power of active microwave radar instruments is that they can monitor the ocean surface signatures of bubbling methane through clouds over a wide swath and at a high spatial resolution overcoming one of the major limitations to optical instruments," said ESA's Scientist for Ocean and Ice, Craig Donlon.

"This allows for a complete picture of the disaster and its associated event-timing to be established."

Therefore, other Earth observation satellites carrying optical and radar imaging instruments were called upon to characterize the gas leak bubbling in the Baltic. 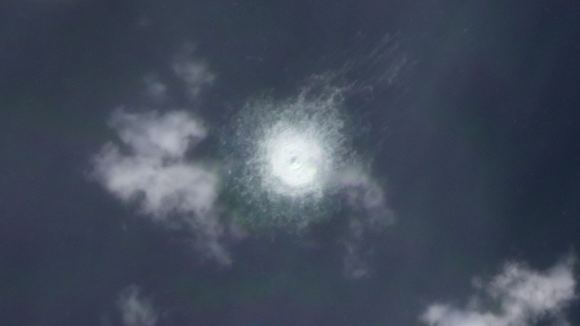 Planet Labs' Planet Dove satellite showed a bubbling disturbance in the Baltic Sea ranging from 500 to 700 meters (1,640 to 2,300 feet) across the water's surface.

Other satellites saw these views of the area: 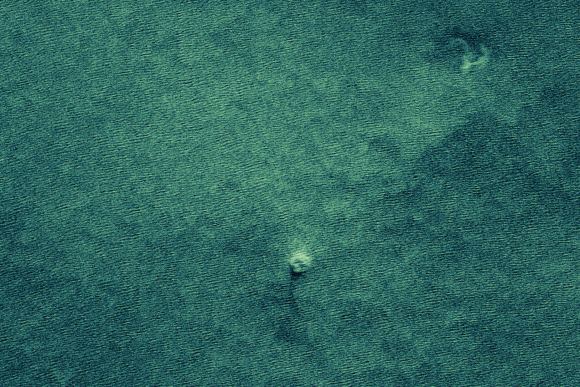 This radar image was captured on September 28 by ICEYE – the first New Space company to join the Copernicus Contributing Missions fleet. (ICEYE) 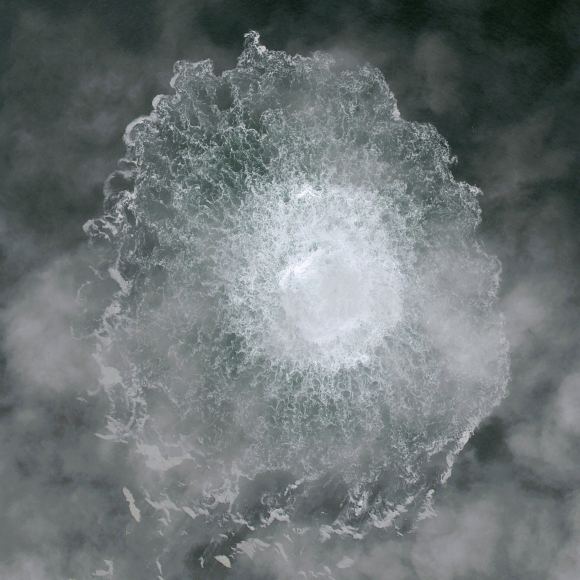 Gas leaking into the Baltic Sea on 29 September 2022 from one of the damaged Nord Stream pipelines was seen bubbling up to the surface by a Pléiades Neo satellite. (Airbus/Pléiades Neo)

Several days later, a significant reduction in the estimated diameter of the methane disturbance was seen as the pipelines' gas emptied. This animation from the Copernicus Sentinel-2 satellite confirms this, showing views from 30 September and 3 October 2022.

Here's a map of the region where the pipelines are. While the leak is no longer a threat, the repercussions of this disaster remain.

This article was originally published by Universe Today. Read the original article.

“The split control of Congress may shift Washington’s approach to Ukraine, the Middle East, and other areas.”

Our Wednesday News Analysis | 'The American Jewish war over Zionism can begin,' 16 November 2022.

The Evangelical Pope| 'Hope and Trust … Not Alone Amid the Enigmas of Existence,' 14 November 2022.

The views expressed are solely those of the author and may or may not reflect those of the Building the Bridge Foundation, The Hague. 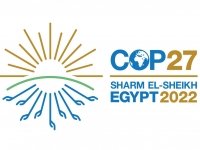