Opinion / Netanyahu Can’t Sell the Idiocy of Annexation to U.S. Jews, So He Went to the Evangelicals

What do J Street and Daniel Pipes have in common?

Generally speaking, nothing whatever.

J Street is, in its own words, the major "pro-Israel, pro-peace" lobbying group in Washington, known for its long-time advocacy of a two-state solution as the only acceptable answer to the Israeli-Palestinian conflict. And Daniel Pipes is a commentator and activist on the Middle East, known for his ferociously right-wing and anti-Muslim positions on all aspects of Israel’s relations with the Arab world.

And yet Pipes and J Street have found common ground. They both agree that Bibi Netanyahu’s plan to annex parts of the West Bank would hurt Israel. Pipes expressed his view in a recent New York Times op-ed, while J Street has been battling Netanyahu’s position since its announcement prior to Israel’s last general election.

And the planned annexation is about as bad as it gets. It is pure madness and utter folly.

An Israeli supporter carries a portrait of Prime Minister Benjamin Netanyahu with the legend: ‘Netanyahu: You’ll never walk alone’ at a gathering in front of his Jerusalem residence. May 17 2020.Credit: AFP

It will lead to an international uproar and probably economic sanctions, including from European countries friendly to Israel. It will undermine Israel’s alliances and may destroy promising new relationships with moderate Arab countries in the region. It will antagonize Joe Biden and other long-term supporters of Israel in the Democratic party, who have already publicly expressed their opposition.

And it will infuriate the great majority of American Jews, who will not understand why any remotely sane Israeli government would ever consider such an act.

One might wonder, therefore, how Netanyahu, prime minister of the Jewish state, attempted to sell the idea of annexation to American Jews. And the answer is that he didn’t. He didn’t even try.

Instead, he pitched it to the European Coalition for Israel, which is made up mostly of Evangelical Christians. His speech promising annexation was made on April 26 at a virtual convention marking the 100th anniversary of the San Remo conference, the conveners of which granted Great Britain the UN mandate for Palestine.

While his new coalition members are busy denying, Netanyahu tells an evangelical crowd he is 'confident' Jewish settlements will be annexed within months https://t.co/BbLlb5i0rX

"Three months ago," Netanyahu said in his remarks, "the Trump peace plan recognized Israel’s rights in all of Judea and Samaria. And President Trump pledged to recognize Israel’s sovereignty over the Jewish communities there and in the Jordan Valley…A couple of months from now, I’m confident that that pledge will be honored, that we will be able to celebrate another historic moment in the history of Zionism. A century after San Remo, the promise of Zionism is being realized."

As an aside, it should be noted that premise of the April meeting on San Remo was flat-out wrong. The conveners of the 1920 San Remo Conference did not promise a Jewish state in all, or even in most, of the land of Israel. Consistent with the Balfour Declaration, they simply called for a Jewish national home without reference to borders, and awarded the Mandate for Palestine to Great Britain.

But the interesting question, of course, is why a speech of such significance was given to a largely unknown Evangelical group in Europe. Is not Zionism the national liberation movement of the Jewish people? And if the prime minister of Israel is announcing a momentous political decision that supposedly will make the "promise of Zionism" a reality, should it not be done before a Jewish audience, made up of Jews from the United States and other Diaspora communities?

After all, it is the Jews, and not the Evangelicals, who are the direct stakeholders in the Zionist enterprise.

But my guess is that it never occurred to Mr. Netanyahu to search out a Jewish audience, and certainly not an American one. He knows that such a speech could not be given in America, except to a wildly unrepresentative — probably Orthodox — Jewish audience. Even at AIPAC such a speech would be unthinkable.

The reason, of course, is that American Jews would know that annexation is pure idiocy. And they would ask questions that the Evangelicals would not ask.

Why destabilize Jordan, making Israel less secure rather than more secure? Why risk the collapse of the Palestinian Authority, which despite all its faults serves Israel’s interests? Why undo the progress, made over so many years, in establishing ties between Israel and the Gulf States?

Why move Israel one more step down the path to a bi-national state? Why hand a weapon to the anti-Israel fringe in the Democratic party while upsetting the pro-Israel mainstream that has worked so hard to combat it? Why push so hard for an annexation that no one really wants — not the Democrats, not the Republicans, and not even the Evangelicals? (A review of statements by mainstream Evangelical leaders shows very little interest in the annexation issue.)

And the fact is that, standing before an American Jewish audience, Bibi could not answer a single one of these questions. Because he has no answers. (If he had them, we would have heard them by now.)

Because, incredibly, entering his fifth term as prime minister of Israel, he has yet to articulate a vision of what Zionism is and what a Jewish state should look like. Because for all his political skills and security credentials, and his many — but increasingly narrow — electoral triumphs, he has stopped caring even the slightest bit about his role as the most important leader of world Jewry.

Although Israel finally has a new government, American Jews, and the rest of the Diaspora too, have remained largely indifferent to its formation. Another Netanyahu government is hardly exciting news, and other than Bibi himself, there is not a single minister who has generated much interest or curiosity.

In America, foreign policy issues have receded into the mist. American Jews, after all, have problems of their own that understandably take precedence over everything else: America’s failing economy, their own health and safety, and the lunatic demagogue who is their president.

Still, a decision to annex 30 percent or more of the West Bank could turn things around very quickly, and not in a good way. Joe Biden, a faithful advocate of a Jewish and democratic Israel, would be pushed into a corner, and the whole issue of the Democratic platform would suddenly come into play.

Should the annexation be ignored, mildly rebuked, or condemned?  And if condemned, what language should be used and how harsh should it be? And how to deal with the far-left elements of the party, who will be pushing hard to slash aid to Israel? And American Jews, overwhelmingly in the Democratic camp, would be drawn into the muck, struggling like Biden to respond in a way that would be supportive of Israel while still making moral and political sense.

And then, of course, President Donald Trump, with terrible polls and desperate to distract the electorate, would wade in. What he would say would almost surely reflect ignorance of the issues, and would likely contradict the central principles of his own "Deal of the Century."

But the thrust of his message would likely be that he cares about Israel while Biden does not, and neither do other Democrats — most Jews included — who don’t stand with Trump and Bibi.

In other words, the Trump-Bibi tag team would deal a fatal blow to the American-Jewish credo, embraced by Israel supporters for more than half a century, that pro-Israel advocacy is, and must always remain, a bipartisan matter. The heart of the credo is this: Pro-Israel advocates can disagree with either party or with both, but the terms of the debate are never defined in such a way that one party or the other is classified as the enemy of Israel or of the Jews.

And what will American Jews say if this is the scenario that transpires?  I have no idea, and neither do they. While commitment to the Jewish state is in their DNA, they will find themselves in an impossible position. And Bibi will have put them there. The rules of the game that have protected Israel’s interests since its founding will have shifted dramatically to Israel’s detriment.

There are those, including Haaretz’s Anshel Pfeffer, who say that Bibi, recognizing the stakes and seeing some resistance to annexation by the Trump administration, will find an excuse to back away. Perhaps. I hope they are right.

But my own fear is that, like Trump, Netanyahu has become an increasingly desperate man. Facing criminal charges and possible imprisonment, abandoned by many senior members of his own party, influenced by a son with a toe in the waters of the European far right, and often consumed by vindictiveness and solipsism, he has lost sight of what is happening in the world around him.

The man who spent the last 10 years not talking about annexation, because it is deeply problematic, now sees it as his legacy and as Zionism’s fulfillment.

Let us hope that he, and those around him, recover their sense of history — and reality — before it is too late.

Eric H. Yoffie, a rabbi, writer and teacher in Westfield, New Jersey, is a former president of the Union for Reform Judaism. Twitter: @EricYoffie 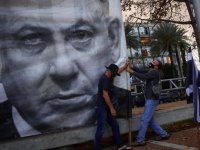