On Abraham Accords Anniversary, Biden Is Tepid About Israeli-Arab Peace

A historic breakthrough has been dragged into partisan politics. 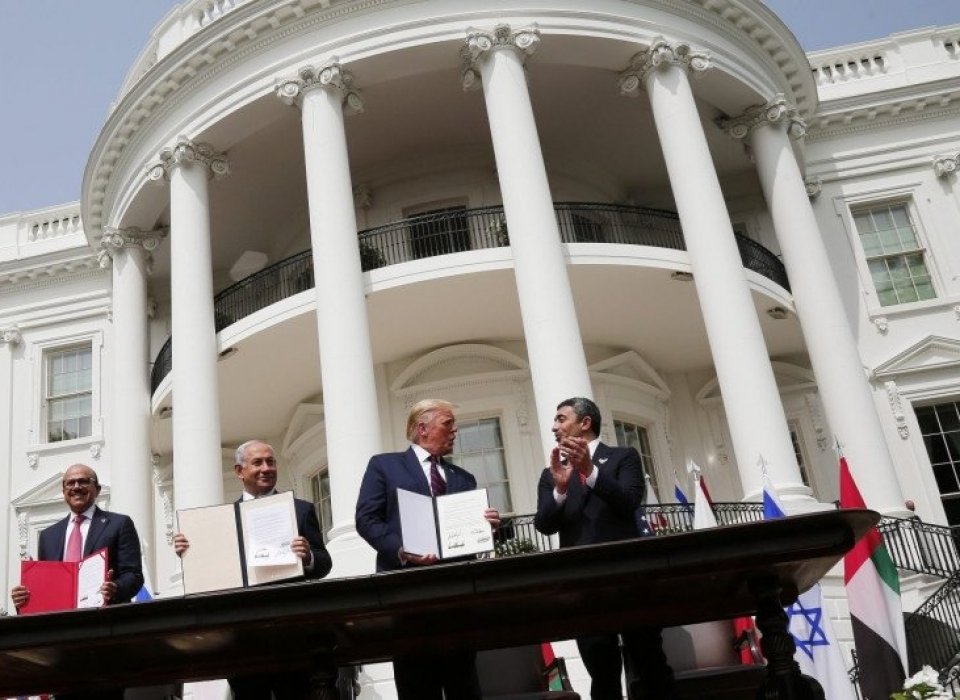 By neglecting to take ownership of the Abraham Accords and mumbling only faint praise for Israel’s new ties with former Arab adversaries, U.S. President Joe Biden is helping drag Arab-Israeli peace—the rock of bipartisan Middle East policy—into partisan politics. Next week is the one-year anniversary of the historic peace deal between Israel, Bahrain, and the United Arab Emirates, but the White House has left it to the Republicans to celebrate the occasion. One year after then-U.S. President Donald Trump brought officials from the three countries to a signing ceremony on the White House lawn, his former Middle East team is leading the celebration of its diplomatic breakthrough with a possible eye toward the 2024 elections.

To be sure, Biden has had more pressing issues on his plate, including the rushed withdrawal from Afghanistan, the resurgence of the COVID-19 pandemic, and devastation from hurricanes and wildfires. That has created an opening for Trump’s son-in-law Jared Kushner, who brokered the accords as a White House adviser, to generate some hoopla and remind Washington’s power brokers of the previous administration’s signature foreign-policy achievement.

The newly created Abraham Accords Peace Institute, co-founded by Kushner, is holding an anniversary lunch at the Four Seasons Hotel in the Georgetown section of Washington on Sept. 14 that will feature a panel discussion with ambassadors from the three signatory nations. Morocco and Sudan, which also signed normalization agreements with Israel, will participate as well. Although the peace institute was co-founded by Haim Saban, a prominent billionaire and Democratic Party donor, and ostensibly aims to promote bipartisan support for peace in the Middle East, the Trump brand comes through loud and clear.

Amping up Republican proprietorship over the agreements will be David Friedman, U.S. ambassador to Israel during the Trump administration, who is organizing an anniversary bash in Jerusalem next month. The ex-diplomat recently founded the Friedman Center for Peace through Strength, which will present its inaugural prize to former U.S. Secretary of State Mike Pompeo and screen an Abraham Accords documentary co-produced by the Trinity Broadcasting Network, the United States’ largest Christian-themed broadcaster, at the event. Pompeo seems to be positioning himself as a possible Republican presidential candidate in the event that Trump chooses not to run, trusting that his role in facilitating the accords will rally support from Israel-loving evangelical Christians, who form a vocal part of the Republican base.

There’s plenty to celebrate. The agreements were the first peace deals any Arab country signed with Israel in 26 years. And in contrast with the chilliness and hostility that followed the 1979 pact with Egypt and the 1994 treaty with Jordan, the four Arab states that signed the Abraham Accords pledged to develop warm people-to-people ties with the Jewish state. While Israel and several Gulf states have long cooperated secretly on defense and intelligence, a list recently compiled by the UAE contains 63 examples of public cooperation with Israel initiated during the first year of peace alone. They include a new UAE embassy in Tel Aviv, joint coronavirus research, and an agreement by Abu Dhabi’s Mubadala sovereign wealth fund to buy a $1 billion stake in a Mediterranean gas rig co-owned by Chevron and several Israeli energy companies.

Tourism is booming, too, despite pandemic restrictions. The past year has seen some 200,000 Israelis flying to the UAE, especially Dubai, where hotels now cater to Jewish travelers with kosher buffets and ballrooms turned into synagogues for this week’s Rosh Hashanah holiday. When the Dubai Expo opens in October, Israel will be, for the first time at any such event in the Arab world, among 191 nations with an official pavilion.

Surprisingly, the accords withstood their first and very serious test. It took nine months from the time Trump announced the agreements for the Palestinians’ rage over a separate peace to boil over. It was one of the grievances that fed into riots in East Jerusalem and cities across Israel before the 11-day Gaza War erupted. Although Hamas and other militant groups fired more than 4,000 missiles at Israel and Israeli airstrikes devastated sections of Gaza during the May conflict, killing 260 people in Gaza and 13 in Israel, none of the Arab partners to the accords broke off relations with Israel as they might have done in the past.

There have been disappointments, too. Much to the Emiratis’ dismay, the Biden administration initially suspended a $23 billion arms sale that accompanied the accords—with wares including F-35 stealth fighter jets and MQ–9B Reaper drones. (The deal was finally approved in April.) In Israel, environmental groups are protesting a deal for the UAE to use a trans-Israel pipeline circumventing the Suez Canal as a shortcut for exporting oil to the Mediterranean and markets in Europe and North America. Critics trying to stop the project say it threatens sensitive coral reefs and beaches around the Red Sea port of Eilat, the pipeline’s southern terminal. They also worry about a repeat of the 2014 oil spill in the Arava desert, when the pipeline burst and 1.3 million gallons of crude oil polluted a nature preserve.

Whether the legacy of the accords will help the Republicans as they hope may be doubtful. After all, the epic diplomatic triumph couldn’t save Trump—or former Israeli Prime Minister Benjamin Netanyahu, for that matter—from being voted out of office. Both had touted the agreements as products of their personal political skills, but there were plenty of other reasons for voters to reject them, not least the mismanagement of their countries’ pandemic response.

Once in office, Biden promised support for advancing the Arab-Israeli agreements. That backing, though, has been tepid at best. He vaguely alluded to the accords without any obvious conviction at his Aug. 29 Oval Office meeting with new Israeli Prime Minister Naftali Bennett. To be fair, that meeting was overshadowed by the Kabul airport suicide bombing, in which more than 180 people were killed, including 13 members of the U.S. military. Aides later told reporters that the White House has been active behind the scenes to prod more Arab nations to connect with Israel.

The Biden administration’s lack of overt enthusiasm stems from several factors, including its efforts to repair ties with the Palestinians—both a real concern of U.S. policy and an increasingly important political cause among activist Democrats. The administration is also pursuing a broader agenda to reduce U.S. involvement in the Middle East while widening its focus on geopolitical competition in Asia. At the same time, Biden is plainly uncomfortable with a diplomatic achievement that is so closely associated with Trump, a man he holds in contempt. That extends to pairing the Trump-chosen name “Abraham” with the accords, which the U.S. State Department allegedly prefers to call “normalization agreements.”

Ditching the biblical patriarch is a shame because that name was a master stroke in formulating the accords, cutting through all sorts of political and emotional barriers that have long divided Israelis and Arabs. What the Trump team grasped and the Biden people miss is the power of religious symbols that resonate for both sides in these ancient lands. The name Abraham—Ibrahim in Arabic—was central to acceptance of the accords because the man is revered by both Muslims and Jews. When critics assailed the Abraham Accords as a betrayal of the Palestinians and camouflage for a massive arms deal, the signatories coolly responded that the pact represents a historic reconciliation between ancient cousins tied by common cultural roots and should serve as a stepping stone toward Middle East peace.

Before smashing political taboos to establish open ties with Israel, the UAE already planted seeds for the accords by taking the wraps off the country’s secret Jewish community and bringing Pope Francis to celebrate mass in Abu Dhabi, where there is a substantial expat Christian community. Preaching a new path of interfaith fellowship, the oil-rich Gulf state unveiled plans in 2019 to build a monumental prayer compound in its capital called the Abrahamic Family House that will contain a mosque, a church, and a synagogue when it opens next year. Emirati leaders reasoned it would be helpful to make Jews more acceptable to their own citizens before revealing the close strategic relations the government had already cultivated with Israel, the Arab world’s principal enemy for the better part of the last century.

The apathy with which the Biden administration has treated the coming anniversary of the Abraham Accords reflects a tin ear. Letting Trump retain ownership of this breakthrough in Arab-Israeli peacemaking and not working aggressively to extend its reach is a mistake on which Republicans are sure to capitalize as they plot their return to the White House in three more years. 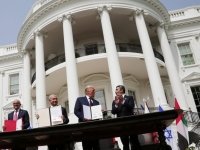