'No Diplomatic Process With the Palestinians,' Source Close to Bennett Says After Gantz Meets Abbas Defense Minister Benny Gantz met with Palestinian Mahmoud Abbas on Sunday night in Ramallah, in the first meeting between a senior Israeli government official and the Palestinian Authority leader since 2010.

According to a statement from Gantz's bureau, the two discussed national security, civil and economic issues, as well as the current security and financial situation in the West Bank and Gaza.

During the meeting, Gantz told Abbas that that Israel is right to implement a number of steps to strengthen the Palestinian economy. The statement said that the two would continue to discuss the topics brought up in the meeting.

This evening I met with PA Chairman Mahmoud Abbas to discuss security-policy, civilian and economic issues. I told Chairman Abbas that Israel seeks to take measures that will strengthen the PA’s economy.

Prime Minister Naftali Bennett returned from a visit to Washington, D.C. on Sunday night, and was notified about the meeting in advance.

A source close to Bennett said "there is no diplomatic process with the Palestinians, nor will there be one." The source added that "the meeting between Gantz and Abu Mazen [Abbas] was approved in advance by the prime minister. The meeting covered routine issues between the defense establishment and the Palestinian Authority."

Hamas spokesman Sami Abu Zuhri criticized the meeting calling it dangerous and disrespectful. Zuhri blamed the Palestinian Authority of "caring more about security cooperation with Israel than the national interests of Palestine."

On Friday, during Bennett's meeting with U.S. President Joe Biden, the Israeli prime minister clarified that Israel has no intention of advancing a diplomatic process with the Palestinians due to the current political circumstances. But due to this situation, he added, he is eager to advance fiscal measures with the Palestinian Authority, which is suffering from an economic crisis.

The United States has demanded the rebuilding of Gaza, and Bennett conditioned Israel's agreement on three steps: No more rockets fired from the Strip at Israel; ending the smuggling of missiles into the coastal enclave; and ending the crisis of the Israeli civilians and bodies of soldiers held captive by Hamas in Gaza. An Israeli diplomatic sources said that if these conditions are fulfilled, "the sky is the limit."

About three months ago, senior PA officials gave a list of political demands to the U.S. government that can be implemented even without public negotiations. Israel has already begun advancing some of these steps, among them issuing thousands of building permits in Palestinian locales and 15,000 additional permits to allow Palestinians to work in Israel. The list includes about 30 recommendations regarding restoring the PA's governing authority, improving the Palestinian economy and bettering the quality of life for its residents.

A source involved in this process told Haaretz at the beginning of this process that the PA, Bennett's government and the U.S. government – the three key figures – believe that they will not be able to hold significant, public diplomatic negotiations between Israel and the Palestinians at this point. But at the same time, the PA's initiatives on the list can be worked on "under the radar," and without stirring the public's attention on either side of the Green Line.

"Both sides have an interest in keeping a low profile," the source said. Even if just some of the measures can be implemented at this point, he added, it will be an achievement for the Palestinian public, and improve the quality of their day-to-day life. 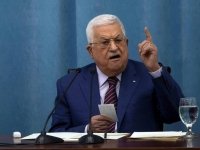