As a 12-year-old boy in 1948, I fled with my family from our home in the Jerusalem neighborhood of Katamon and never returned. Life took me to Ramallah, where I received a good Christian education, and then to the United States, where I became a physicist. Eventually, I went to the United Kingdom, where I became involved in international economic development. My heart still beats with memories of my beautiful home in Jerusalem, but my mind—trained through physics to deal with concrete facts—tells me that, unfortunately, history in Palestine cannot be reversed. The future, on the contrary, is in our hands. 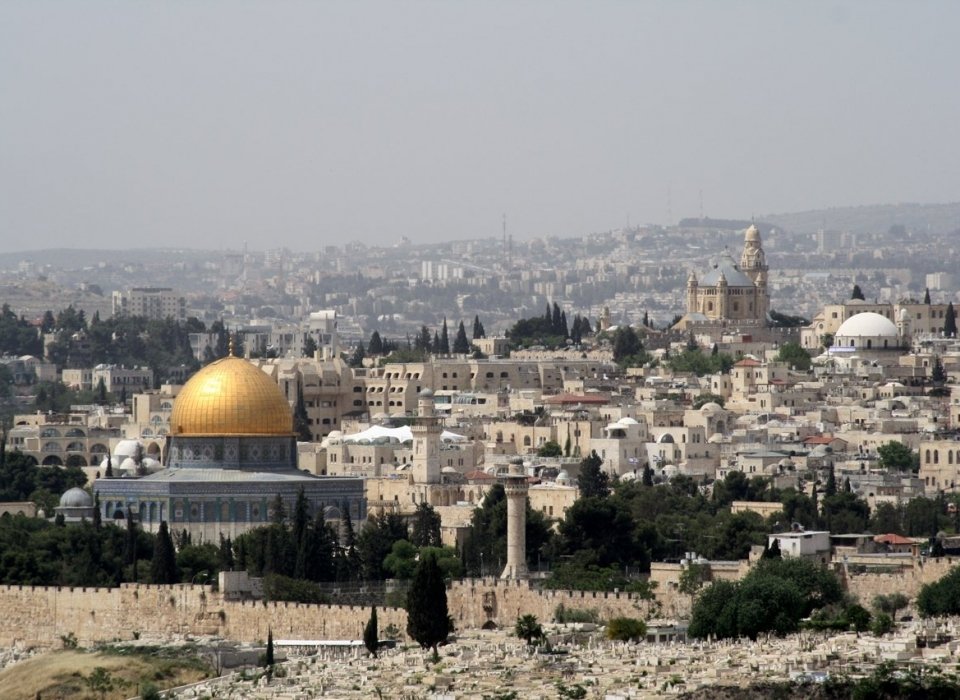 This realization prompted me almost 50 years ago to start looking for a formula that would enable Israelis and Palestinians to coexist in peace and mutual respect.

Indeed, in the last few decades there have been several opportunities to accomplish that. At the Madrid Peace Conference in 1991, the leader of the Palestinian delegation, Haidar Abdel-Shafi, surprised many with his moderate and progressive statement: “We seek neither an admission of guilt after the fact, nor vengeance for past iniquities, but rather an act of will that would make a just peace a reality.”

More than one hundred years after the Balfour Declaration, the Palestinians are still waiting for such an act of will.

The Oslo process was another opportunity for peace and reconciliation between Israelis and Palestinians, but more than 25 years later, it seems like a colossal failure. Settlements keep expanding, and the Israelis haven’t bothered to touch the issue in their latest, protracted elections. Moreover, we see the incremental—as opposed to comprehensive—approach to negotiations was a recipe for hardened bargaining positions and deadlock. Indeed, Camp David, the Clinton Parameters, Annapolis, the Kerry-led negotiations, and the Geneva Initiative—which served as the underpinning philosophy of the post-Oslo era—have ultimately perpetuated this failed approach.

Observing these developments over the years, I concluded something of fundamental importance was missing. When we look closer at the prevailing approach to the two-state solution, a human dimension is missing. So long as we advocate a strictly separationist two-state solution—where both peoples in reality feel attached to all the land in question between the River Jordan and the Mediterranean Sea—that human factor will remain absent. Therefore, our search for a comprehensive solution will always fall short.

The Israeli-Palestinian conflict confronts us with a paradox. Both separation and integration are necessary and will need to be brought into the equation and reconciled. Strict partition will not work. But a solution that integrates the two peoples without political partition and independence for each side will not work, either.

Given the overlapping connections to the land, each side will have to incorporate some people from the other side as a minority. So either we harness the mutual irredenta, or we are left with irredentism. Without a viable diplomatic horizon, the latter has been winning the day, leaving violence in its wake.

Folke Bernadotte, the UN Security Council’s mediator to the Arab-Israeli conflict from 1947 until his assassination in 1948, understood this, and the UN Partition Plan of 1947, in allowing for a Jewish minority to stay in the Arab state, was an early effort to harness mutual irredenta.

Returning to my thinking on the conflict in 2006 following a career in international development, the proliferation of settlement activity infused my 1970s ideas with more relevance and urgency than ever. With a view to freeing ourselves from the quagmire, I therefore converted those ideas into a fully-fledged framework for final status negotiations and a track-two initiative in the form of the Dual Democracies Initiative (DDI).

In short, DDI is a mutually supportive Israeli-Palestinian two-state formula. It calls for the co-existence and mutual recognition of two peoples across two independent, pluralist, and democratic states, Israel and Palestine, on a reciprocal minorities structure, Palestinian Arabs in Israel and Jewish people in Palestine, preserving the two states’ respective majorities and national characters.

Watching the chaotic uprooting of 8,000 Israeli Jews from Gaza, I am convinced that in any future settlement of the Israeli-Palestinian conflict, another uprooting of a much larger scale in the West Bank is inconceivable. However, instead of letting this fact doom us to a single, binational state with a Balkan-type tendency to endless bloodshed, why don’t we think outside the box, turn a problem into a solution, and aspire for a win-win scenario?

In my vision, DDI generates a bridging point for the parties.

DDI foresees a negotiated, permanent Jewish minority presence within the Palestinian state, fully integrated under Palestinian sovereignty, as opposed to staying in enclaves. In reciprocity, the Palestinians would gain fresh trade-off opportunities across the final status issues: 1967 borders, Jerusalem, refugees, and natural resources. As a framework for final status negotiations rather than a model final status agreement, DDI lays out contours and a mechanism that introduces the human dimension to the conflict resolution paradigm and provides a means by which the parties can succeed in a win-win setting.

DDI truly brings all the issues in dispute onto the table within a comprehensive negotiation framework, thereby multiplying the opportunities for trade-offs and minimizing the risks of deadlock. It does this by introducing an option for a Jewish minority to remain. However, this is not something to be left until the final status. Rather, it is to be dealt with at the framework stage, meaning it is subject to reciprocity implications. When effectively and equitably brought into the negotiation framework, this new modality can jumpstart negotiations, where until now they have been stuck from the outset. It serves as not only a catalyst but also a vision of a (hitherto absent) workable endgame for both sides to strive toward, thus enabling each side to take real risks for peace.

Accordingly, using the 1967 lines as a starting point in negotiations becomes a viable proposition once again, thus preserving for the Palestinian state space, contiguity, and natural resources. Territorial swaps would remain limited in nature, minimizing population displacement and ensuring not only Palestinian territorial contiguity but also the viability of its capital in East Jerusalem. All settlement structures would be converted into civilian communities under Palestinian sovereignty for the benefit of all citizens, both Arab and Jewish. Cooperative private-public sector support from both sides of the final border would underpin the transformation of the transferred economic infrastructure in the Palestinian state, and would prioritize the need for accelerated economic development of the Palestinian state in order to both ensure its viability and enhance its capacity to absorb returnees.

Accordingly, DDI—with its focus on capacity-building, reciprocity, and turning both settlers and refugees into citizens—would unlock fresh scope for dealing with the refugee issue. A comprehensive refugee compensation package consisting of monetary compensation, options to work in Israel, and, to the extent that it does not threaten the demographic balance of the Israeli state, a selective right to return to modern-day Israel, would ensure this issue can be dealt with sensitively and realistically.

With its emphasis on the human dimension, DDI offers a more accommodative political, social, and economic geometry in a Jerusalem that operates as a shared capital and offers its inhabitants seamless functioning across the sovereignty line. DDI thus creates a framework within which the parties avoid the impossible challenge of separating the two communities, yet it ensures and respects the two sides’ respective distinct and independent sovereignties.

On the one hand, DDI meets Palestinian sovereignty needs. And on the other hand, it meets Israeli security needs, as well as expectations relating to the acceptance of the Jewish presence in Palestine and the recognition of the Israeli state as the homeland of the Jewish people.

DDI is the only proposal that offers a truly sustainably secure future for both sides. This is because security can only be effectively guaranteed with the following components in place: mutual acceptance, accommodation, and support; effective sovereignty for both sides; the right political and social infrastructure for highly functioning modern, integrated, and cooperative economies on both sides of the border; and effective implementation of the rule of law within such framework.

Operating quietly behind the scenes as a thought leader, DDI has already helped bring the opportunities of a dual minorities-based two-state solution into the political mainstream—on the ground on both sides of the Green Line and in the international community on both sides of the Atlantic. Politicians in Israel across the political spectrum have internalized its game-changing potential. And Palestinian leadership from Abu Iyad, through Faisal al-Husseini, to Abu Ammar, Abu Ala, and Abu Mazen have all shown openness to the idea, and have even treated it as a given in light of the democratic 1988 Palestinian Declaration of Independence, which enshrines minorities’ rights. Most importantly, as a people-based proposal, it stands the chance of unifying the will of both peoples.

DDI offers a solution based on the foundational principle that if Israelis, Palestinians, Jews, and Arabs are going to have to live together, they should learn to benefit from each other. Its intellectual foundations reach down to the 1947 Partition Plan and have sparked the interest of figures such as F.W. de Klerk. All other options have failed, and with the peace process ominously locked in reverse, it should be given a chance.

Dr George E Assousa, a physicist born in Jerusalem in 1936, is the founder of the Dual Democracies Initiative, a distillation of almost 50 years of international engagement in the search for Israeli-Palestinian peace, security, and reconciliation. 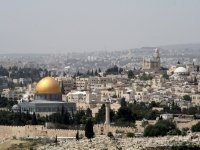