The president began selling his proposal on Wednesday, saying it would fix 20,000 miles of roads and 10,000 bridges, while also addressing climate change and racial inequities and raising corporate taxes. 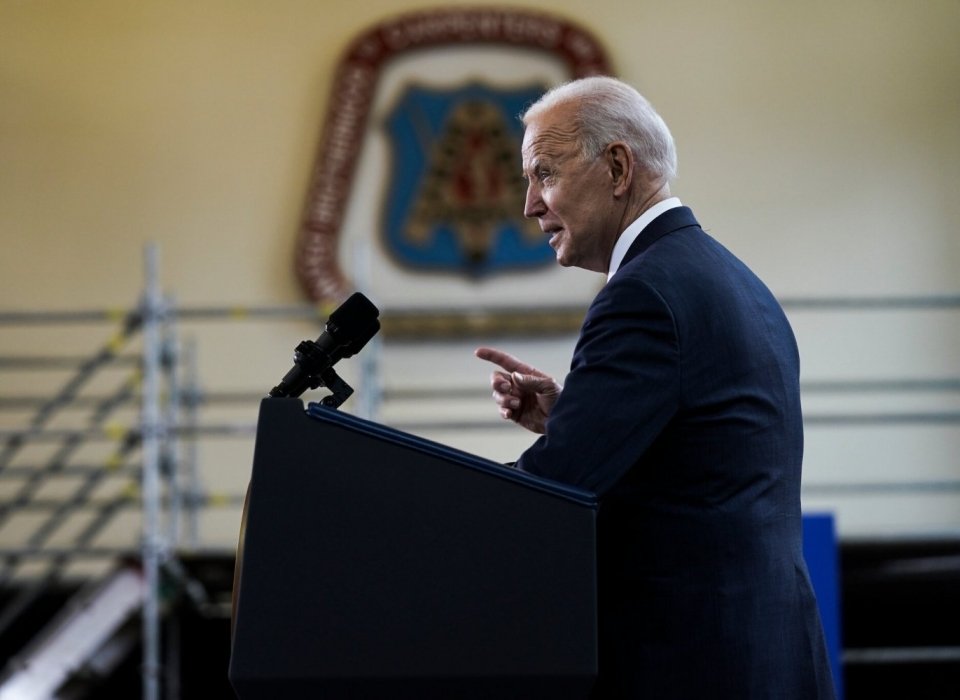 President Biden on Wednesday near Pittsburgh, where he outlined his infrastructure plan. It includes an increase in corporate taxes and plans to address longstanding social and economic problems.Credit...Anna Moneymaker for The New York Times

WASHINGTON — President Biden introduced a $2 trillion plan on Wednesday to overhaul and upgrade the nation’s infrastructure, calling it a transformational effort that could create the “most resilient, innovative economy in the world.”

“It is not a plan that tinkers around the edges,” Mr. Biden said in a speech outside Pittsburgh. “It is a once-in-a-generation investment in America.”

White House officials said the proposal’s combination of spending and tax credits would translate into 20,000 miles of rebuilt roads, repairs to the 10 most economically important bridges in the country, the elimination of lead pipes from the nation’s water supplies and a long list of other projects intended to create millions of jobs in the short run and strengthen American competitiveness in the long run.

They said the plan would also accelerate the fight against climate change by hastening the shift to new, cleaner energy sources, and would help promote racial equality in the economy.

The costs would be offset by increased corporate tax revenues raised over 15 years, particularly from multinationals that earn and book profits overseas. The president cast those increases as a means to prod companies into investing and producing more in the United States.

With Republicans already signaling skepticism or outright opposition, Mr. Biden appealed for support from both parties in Congress, saying the program would be “unlike anything we have seen or done since we built the interstate highway system and the space race decades ago” and calling it “the largest American jobs investment since World War II.”

The spending in the plan would take place over eight years, the president said, and the tax increases would more than offset that spending in 15 years, leading to an eventual reduction of the budget deficit. Unlike the economic stimulus passed under President Barack Obama in 2009, when Mr. Biden was vice president, officials will not in every case prioritize so-called shovel-ready projects that could quickly bolster growth.

But even spread over years, the scale of the proposal underscores how fully Mr. Biden has embraced the opportunity to use federal spending to address longstanding social and economic challenges in a way not seen in a half-century.

Officials said that, if approved, the spending in the plan would end decades of stagnation in federal investment in research and infrastructure — and would return government investment in those areas, as a share of the economy, to its highest levels since the 1960s. 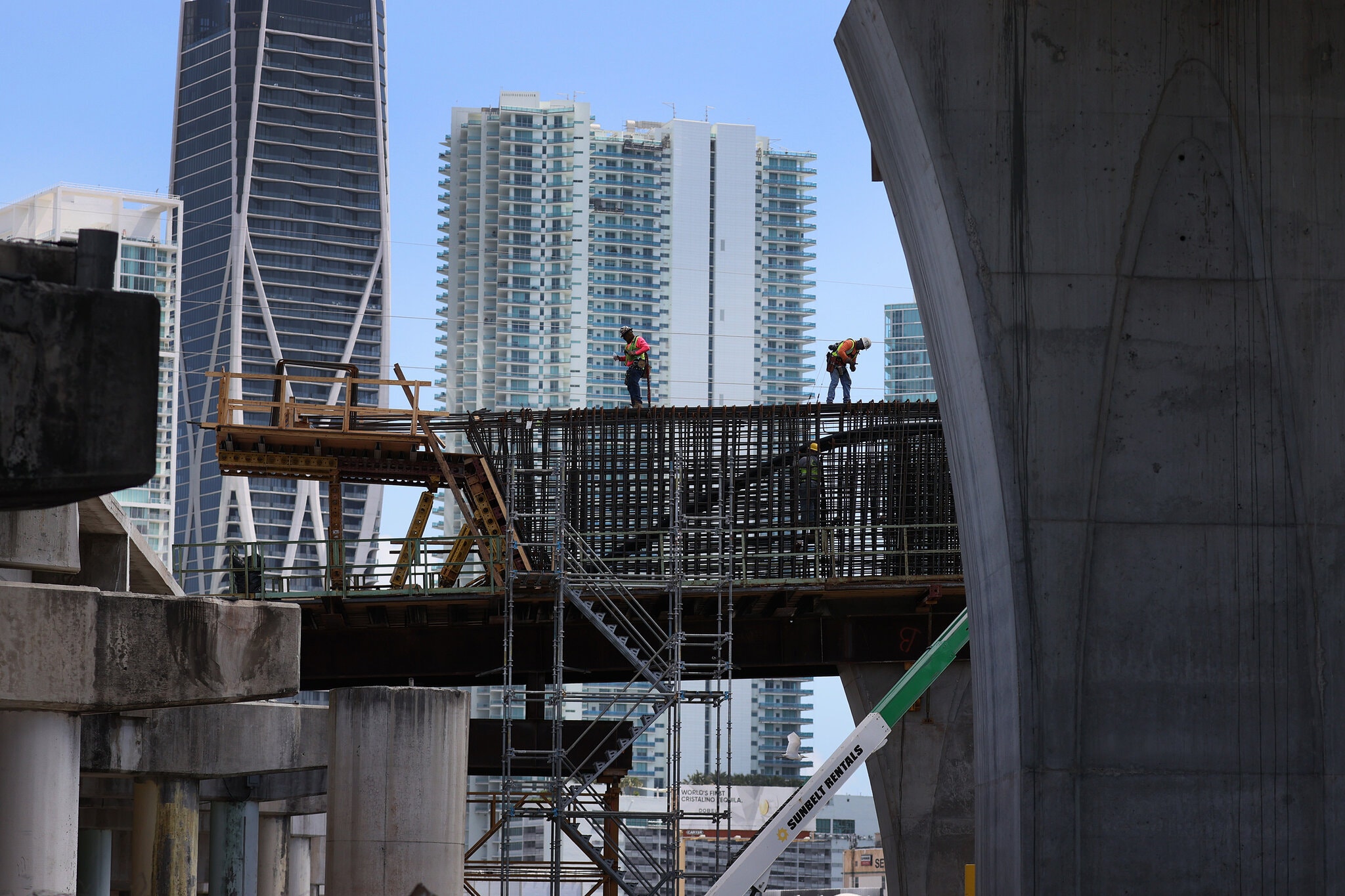 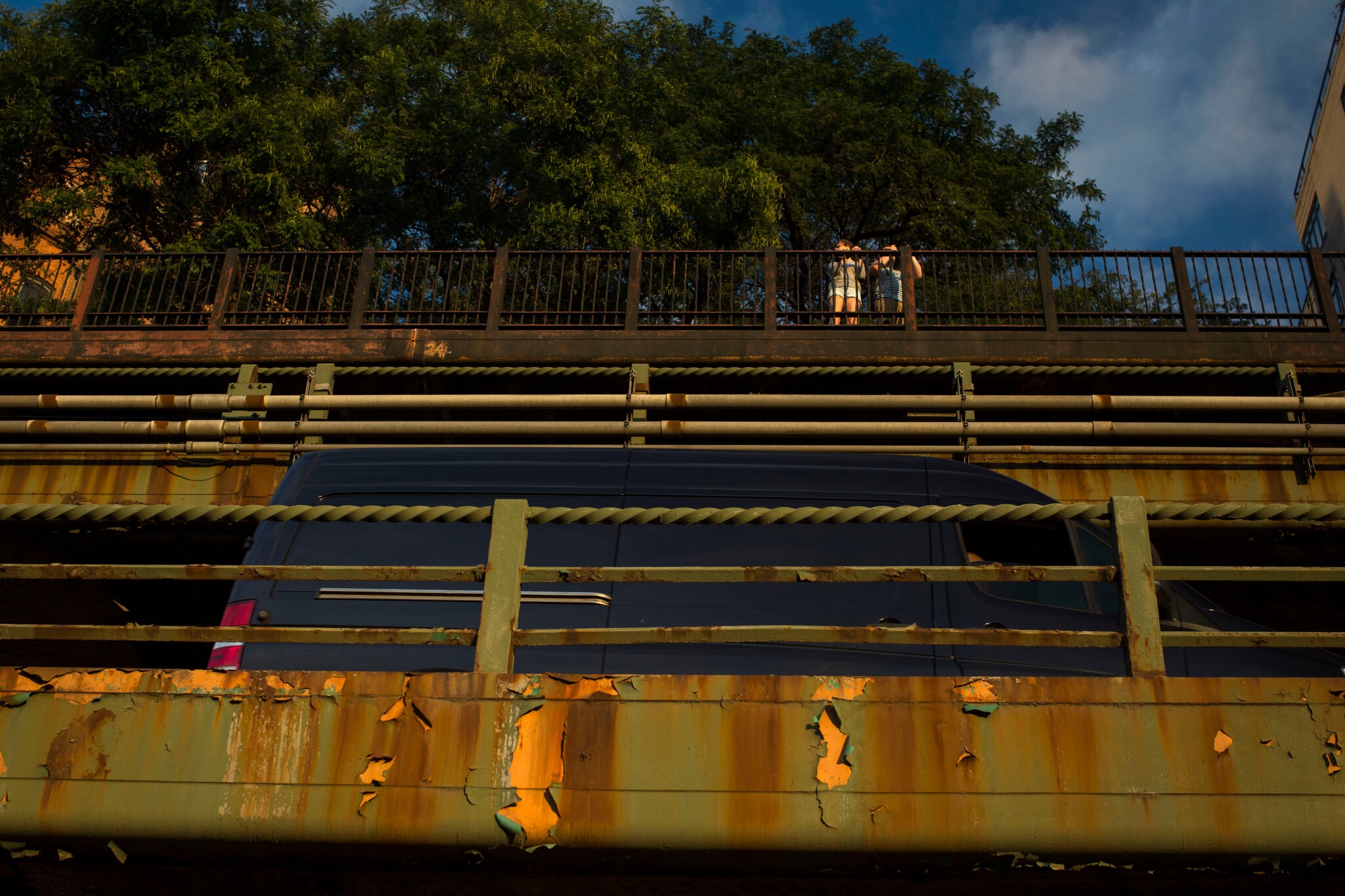 The Brooklyn-Queens Expressway is facing years of lengthy repairs.Credit...Dave Sanders for The New York Times

The proposal is the first half of what will be a two-step release of the president’s ambitious agenda to overhaul the economy and remake American capitalism, which could carry a total cost of as much as $4 trillion over a decade. Mr. Biden’s administration has named it the “American Jobs Plan,” echoing the $1.9 trillion pandemic relief bill that Mr. Biden signed into law this month, the “American Rescue Plan.”

On Wednesday, Mr. Biden said the next phase, which he will seek to pay for in part through tax increases on wealthy individuals, would come in a matter of weeks and be known as the “American Family Plan.”

While spending on roads, bridges and other physical improvements to the nation’s economic foundations has always had bipartisan appeal, the plan Mr. Biden rolled out on Wednesday drew quick opposition from the right for its size and its reliance on corporate tax increases.

Republicans and business groups criticized those tax proposals, calling them nonstarters for bipartisan negotiations. Mr. Biden acknowledged the criticism, even as he defended asking companies to pay more in taxes. And he said he would continue to work on winning Republican support for his proposal.

He said he had already spoken with Senator Mitch McConnell of Kentucky, the Republican leader, about the bill and planned to invite other Republicans to the White House as Congress turns to translating his proposal into detailed legislation.

Mr. Biden challenged critics to offer their own proposals to pay for the plan. “I’m open to other ideas,” he said, “so long as they do not impose any tax increase on people making less than $400,000.”

Mr. McConnell suggested on Wednesday he was unlikely to support the package in the form being proposed by the White House.

“If it’s going to have massive tax increases and trillions more added to the national debt, it’s not likely,” he said. 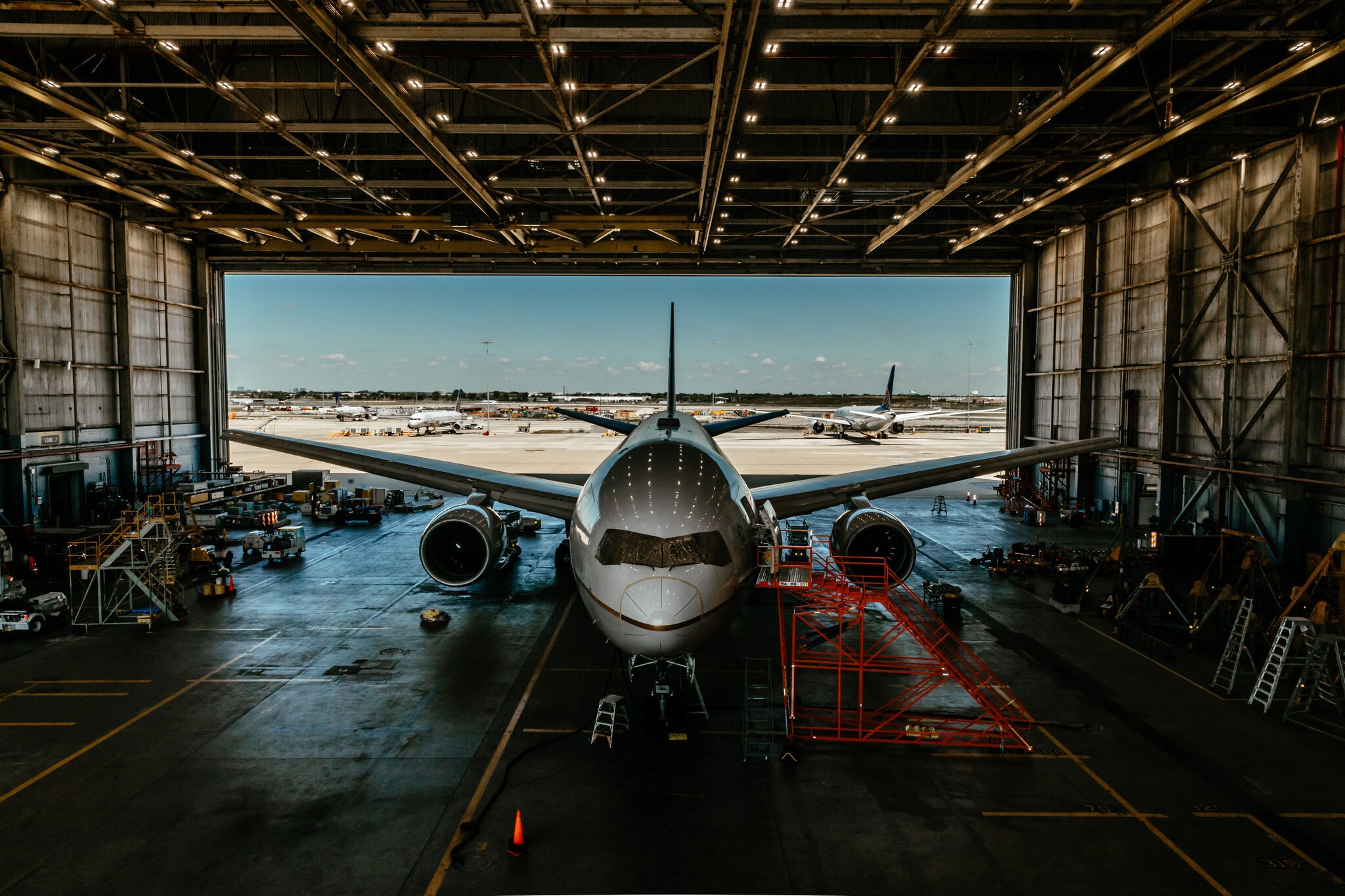 O’Hare International Airport in Chicago. The plan includes $42 billion for ports and airports.Credit...Lucy Hewett for The New York Times 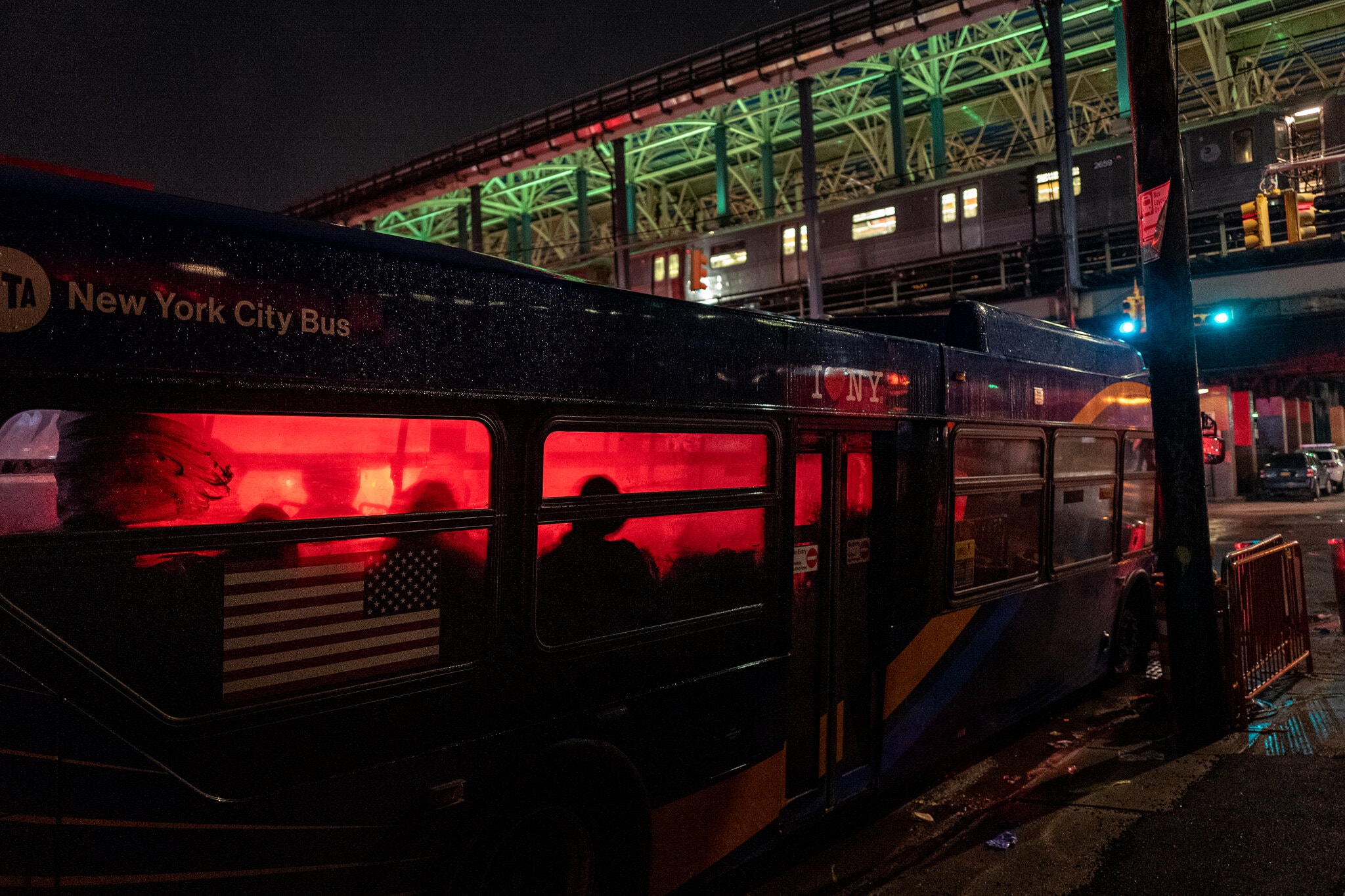 A bus underneath a subway station in Brooklyn. $85 billion would be set aside for public transit.Credit...Jonah Markowitz for The New York Times

The spending in the plan covers a wide range of physical infrastructure projects, including transportation, broadband, the electric grid and housing; efforts to jump-start advanced manufacturing; and other industries officials see as key to the United States’ growing economic competition with China.

It also includes money to train millions of workers, as well as money for initiatives to support labor unions and providers of in-home care for older and disabled Americans, while also increasing the pay of the workers who provide that care.

Many of the items in the plan carry price tags that would have filled entire, ambitious bills in past administrations. 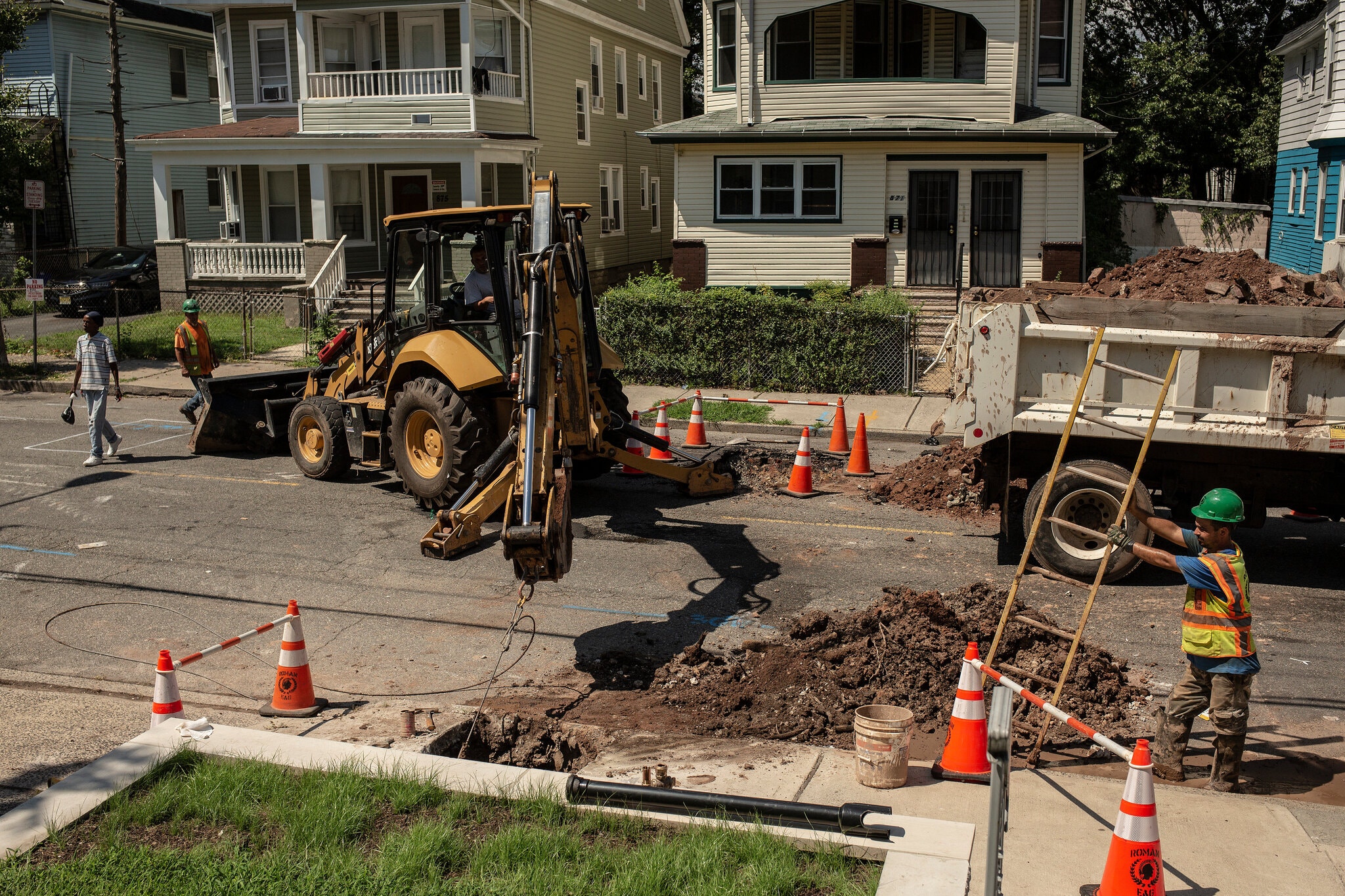 Workers removing lead pipes in Newark. $45 billion goes toward the elimination of such pipes.Credit...Bryan Anselm for The New York Times 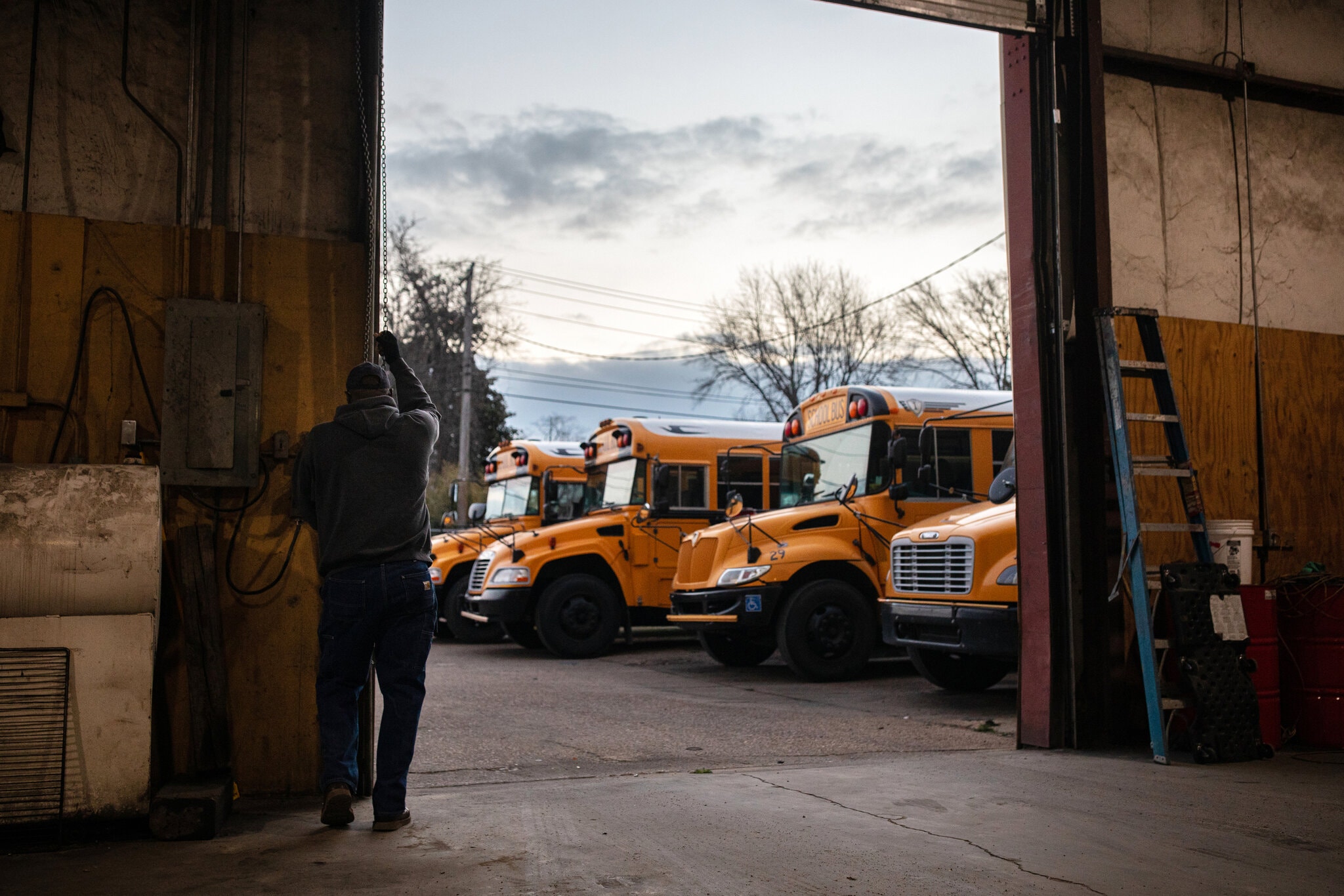 The infrastructure plan also aims to electrify 20 percent of the nation’s fleet of yellow school buses.Credit...Tamir Kalifa for The New York Times

The plan seeks to repair 10,000 smaller bridges across the country, along with the 10 most economically significant ones in need of a fix. It would electrify 20 percent of the nation’s fleet of yellow school buses. And it would spend $300 billion to promote advanced manufacturing, including a four-year plan to restock the country’s Strategic National Stockpile of pharmaceuticals, including vaccines, in preparation for future pandemics.

In many cases, officials cast those goals in the language of closing racial gaps in the economy, sometimes the result of previous federal spending efforts, like interstate highway developments that split communities of color or air pollution that affects Black and Hispanic communities near ports or power plants.

Officials cast the $400 billion spending on in-home care in part as a salve to “underpaid and undervalued” workers in that industry, who are disproportionately women of color. 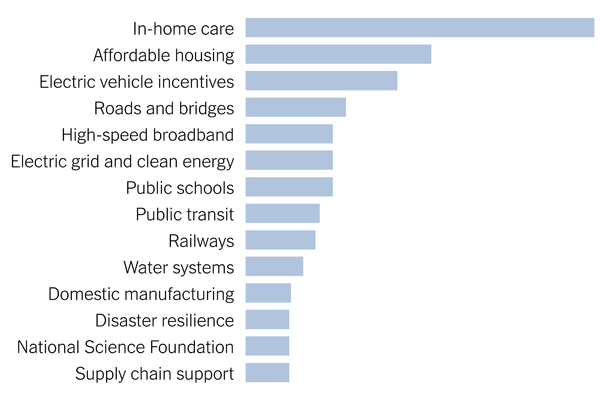 Mr. Biden’s pledge to tackle climate change is embedded throughout the plan. Roads, bridges and airports would be made more resilient to the effects of more extreme storms, floods and fires wrought by a warming planet. Spending on research and development could help spur breakthroughs in cutting-edge clean technology, while plans to retrofit and weatherize millions of buildings would make them more energy efficient.

The president’s focus on climate change is centered, however, on modernizing and transforming the United States’ two largest sources of planet-warming greenhouse gas pollution: cars and electric power plants.

It bets heavily on spending meant to increase the use of electric cars, which today make up just 2 percent of the vehicles on America’s highways.

The plan proposes spending $174 billion to encourage the manufacture and purchase of electric vehicles by granting tax credits and other incentives to companies that make electric vehicle batteries in the United States instead of China. The goal is to reduce vehicle price tags. 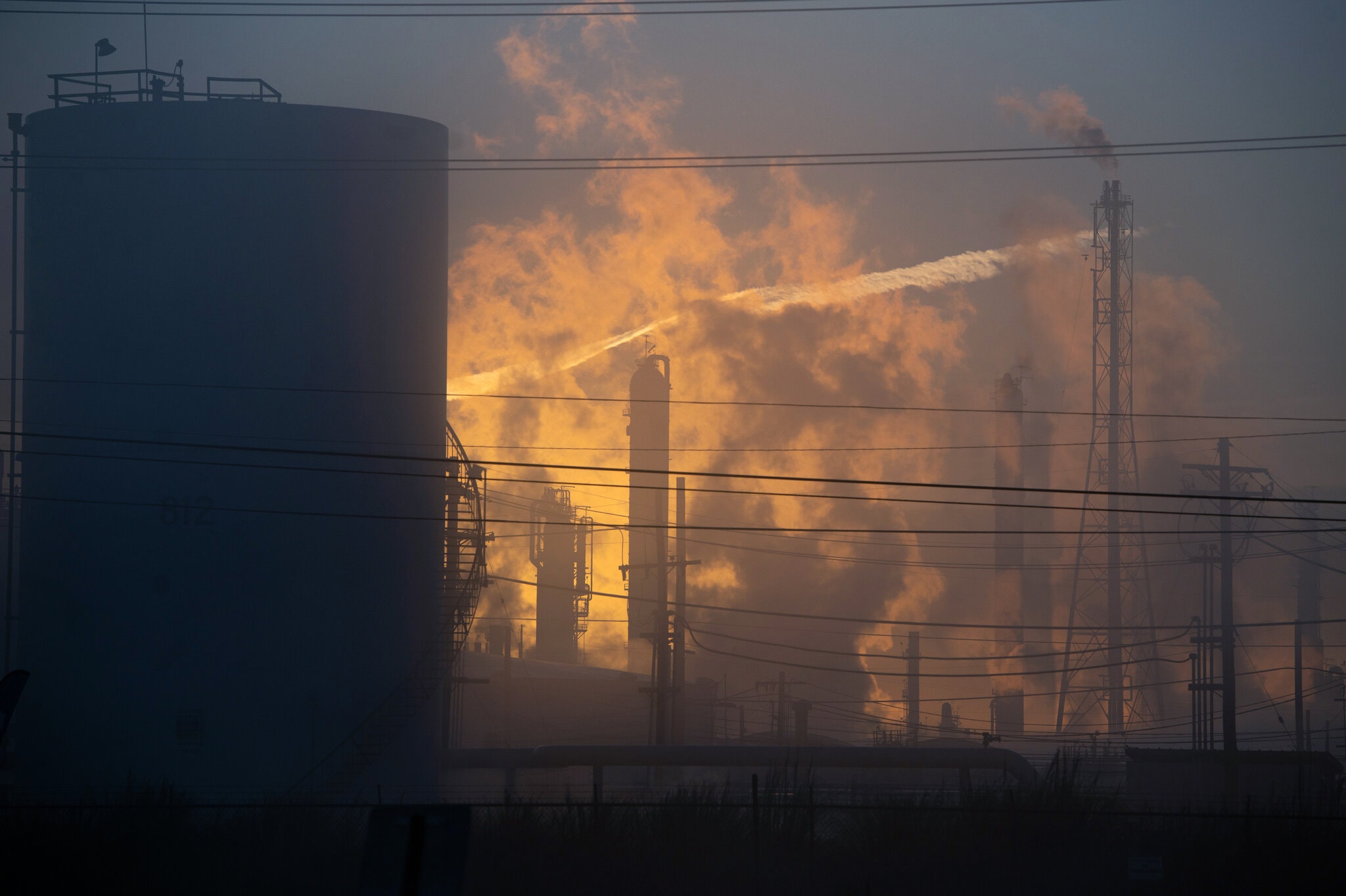 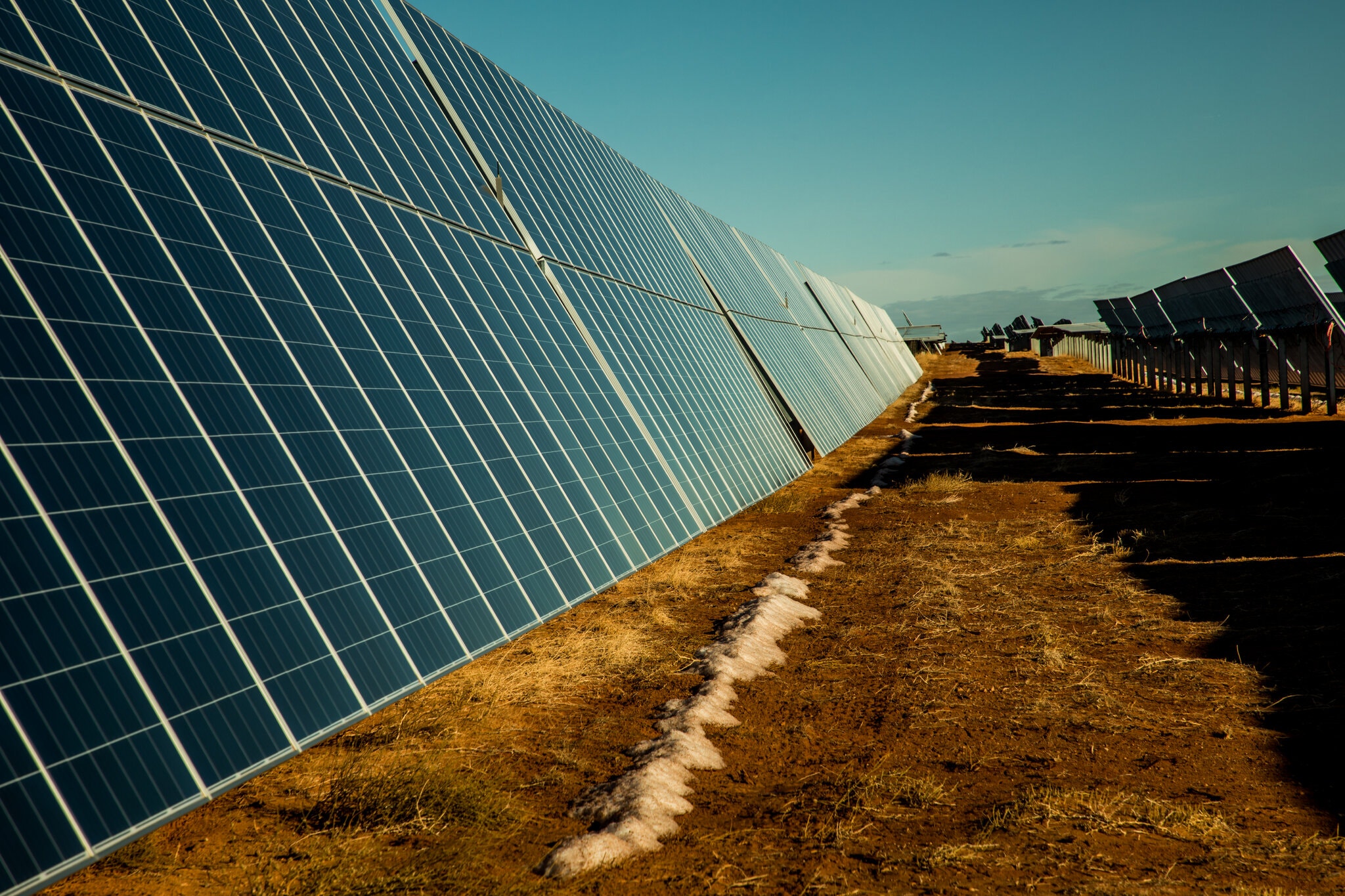 A solar power plant in Kayenta, Ariz. The Biden administration would like to build more transmission lines from wind and solar plants to large cities.Credit...Christie Hemm Klok for The New York Times

The money would also fund the construction of about a half-million electric vehicle charging stations — although experts say that number is but a tiny fraction of what is needed to make electric vehicles a mainstream option.

Mr. Biden’s plan proposes $100 billion in programs to update and modernize the electric grid to make it more reliable and less susceptible to blackouts, like those that recently devastated Texas, while also building more transmission lines from wind and solar plants to large cities.

It proposes the creation of a “Clean Electricity Standard” — essentially, a federal mandate requiring that a certain percentage of electricity in the United States be generated by zero-carbon energy sources like wind, solar and possibly nuclear power. But that mandate would have to be enacted by Congress, where prospects for its success remain murky. Similar efforts to pass such a mandate have failed multiple times over the past 20 years.

It also calls for making infrastructure and communities more prepared for the worsening effects of climate change, though the administration has so far provided few details on how it would accomplish that goal.

But according to the document released by the White House, the plan includes $50 billion “in dedicated investments to improve infrastructure resilience.” The efforts would defend against wildfires, rising seas and hurricanes, and there would be a focus on investments that protect low-income residents and people of color. 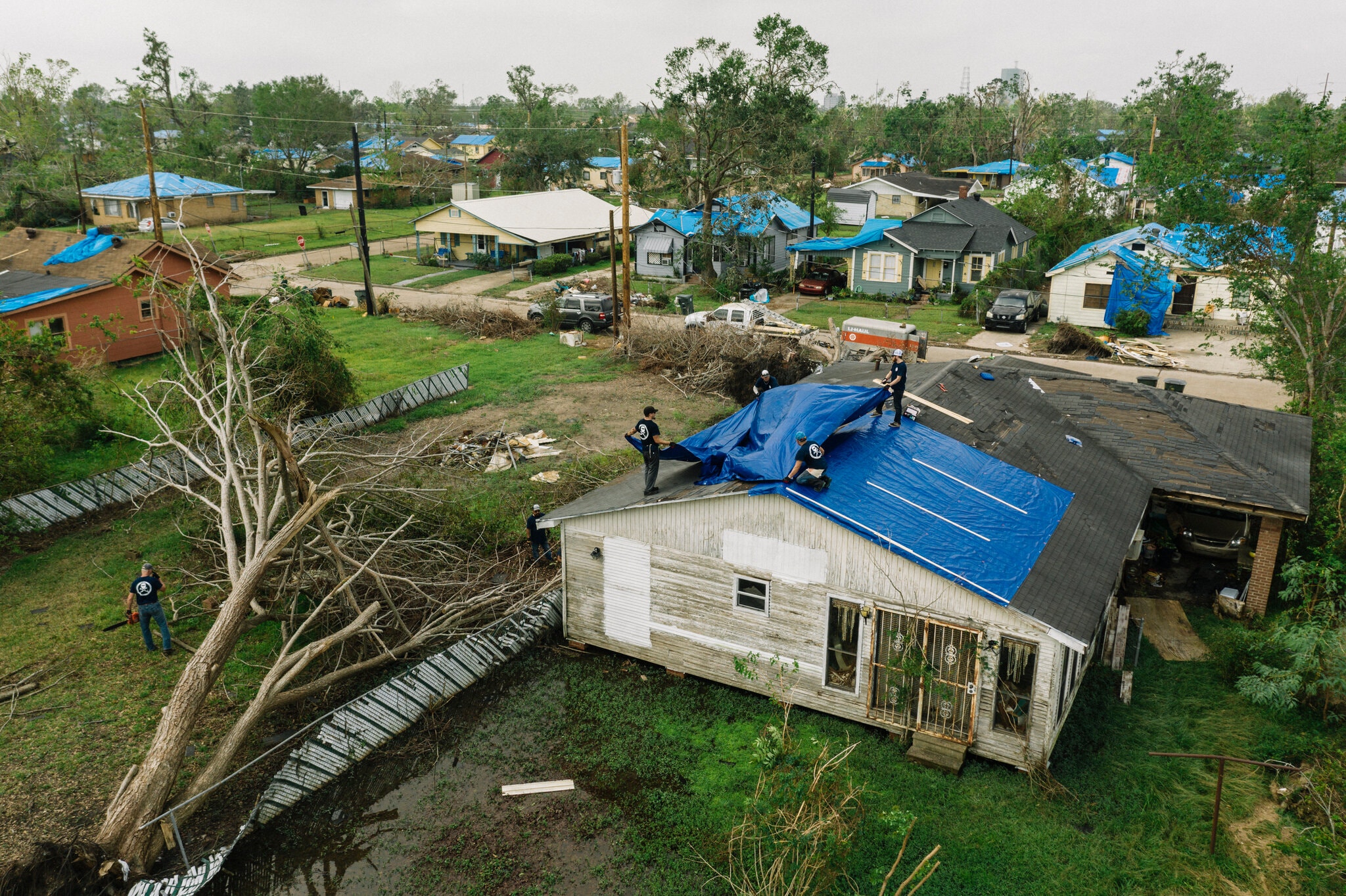 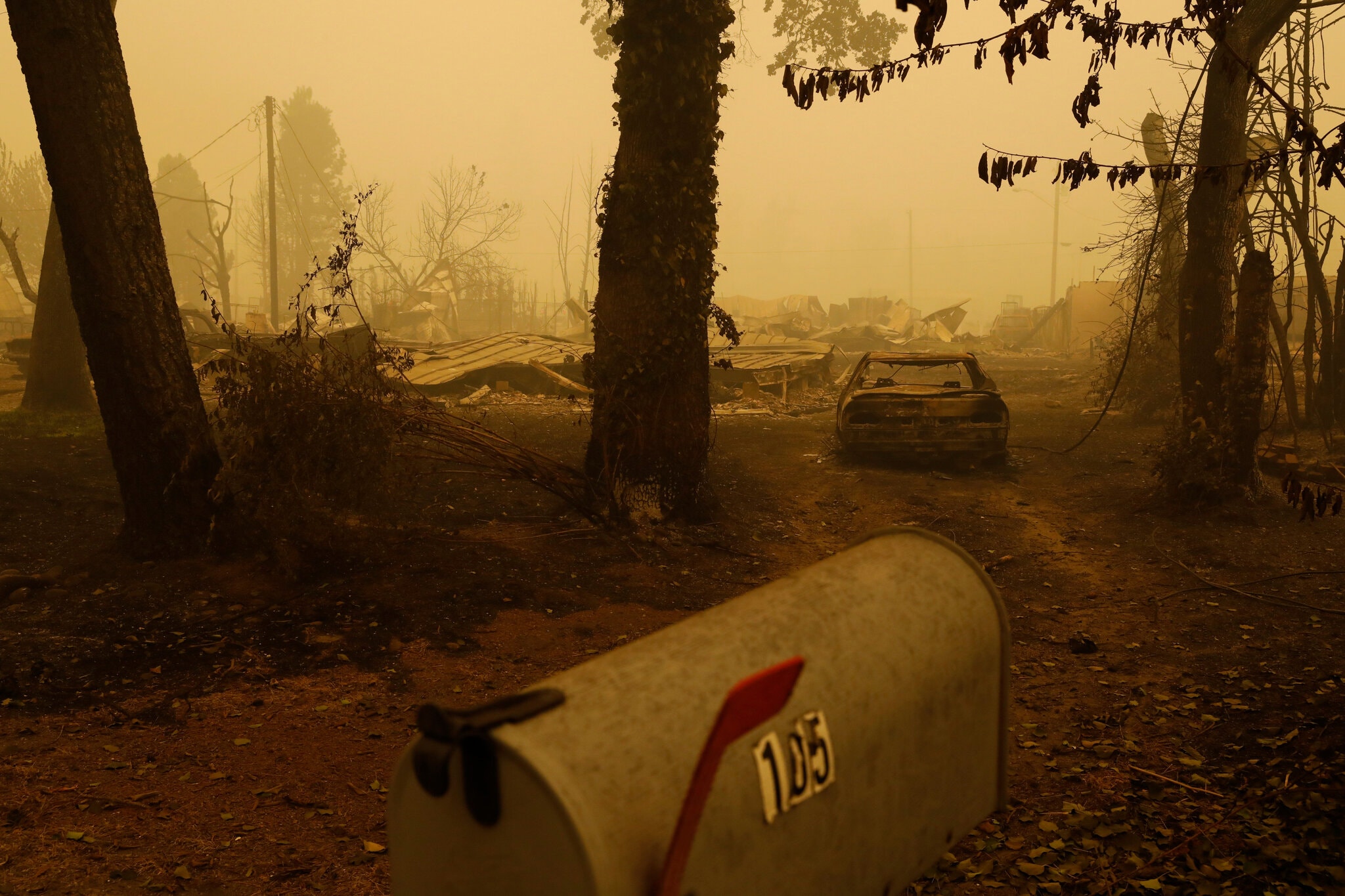 Homes were damaged last year by a wildfire in Gates, Ore. The efforts would aim to defend against wildfires, rising seas and hurricanes.Credit...Kristina Barker for The New York Times

Mr. Biden would fund his spending in part by eliminating tax preferences for fossil fuel producers. But the bulk of his tax increases would come from corporations generally.

He would raise the corporate tax rate to 28 percent from 21 percent, partly reversing a cut signed into law by President Donald J. Trump. Mr. Biden would also take a variety of steps to raise taxes on multinational corporations, many of them working within an overhaul of the taxation of profits earned overseas that was included in Mr. Trump’s tax law in 2017.

Those measures would include raising the rate of a minimum tax on global profits and eliminating several provisions that allow companies to reduce their American tax liability on profits they earn and book abroad.

Mr. Biden would also add a new minimum tax on the global income of the largest multinationals, and he would ramp up enforcement efforts by the Internal Revenue Service against large companies that evade taxes. Mr. Biden said on Wednesday that his proposed tax changes on global income alone would raise $1 trillion over 15 years.

The president appealed to a sense of tax fairness in defending those plans, and he said the plan would deliver concrete improvements to standards of living for Americans while meeting the challenge of competition from China and showing the world that democratic capitalism still works.

“These are investments we have to make,” he said.

Jim Tankersley is a White House correspondent with a focus on economic policy. He has written for more than a decade in Washington about the decline of opportunity for American workers, and is the author of "The Riches of This Land: The Untold, True Story of America's Middle Class." @jimtankersley 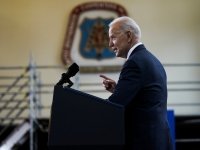