Are Zionists and Evangelicals turning against each other in the Holy Land?

Israeli authorities consider a ban on an Evangelical channel in Israel on the grounds that it aims to convert Jews to Christianity. 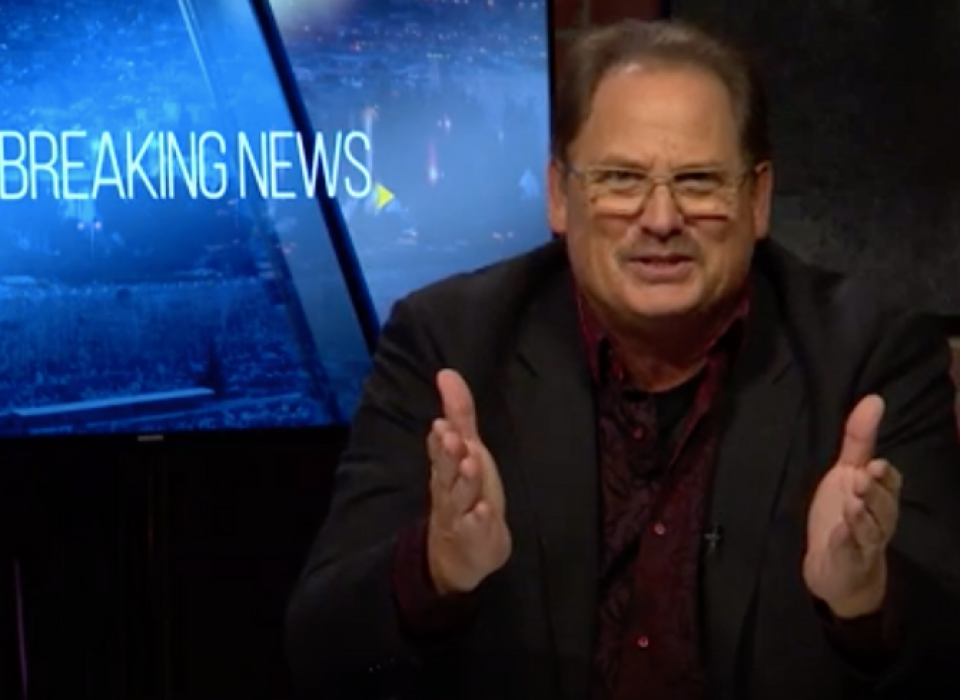 Many Israelis and the world’s Evangelical communities have long been allies. ‘Christian Zionists’ as they are often referred to believe that the return of Jews to the ‘Holy Land’ and the creation of the state of Israel confirms a Biblical prophecy.

But now much to the surprise of some, an international Evangelical network, God TV, which recently gained approval from the Israeli broadcasting regulatory authority to launch its Hebrew-language channel, Shelanu, has run into trouble with the Zionist state.

The friction emerged after God TV CEO Ward Simpson suggested that the network, which broadcasts across more than 200 countries, could persuade some Jews to turn to Jesus, Jewish by birth, as their saviour. This led to an Israeli investigation into Shelanu over whether the channel violated the terms of its licence.

In Israel, where one of the aims of the Zionist state is to maintain a Jewish-majority population, proselytising has been problematic and Shelanu’s licence to broadcast in Israel restricts airing any missionary content, according to the Israeli media.

“We won’t allow any missionary channel to operate in the state of Israel, not at any time and not under any circumstances,” said David Amsalem, Israel’s communication minister, who is also a member of the hardline Likud Party.

Amsalem further indicated that the ministry could shut down the network, which has signed a seven-year contract with Hot, the biggest Israeli cable television provider, controlling half of the country’s multichannel market.

Asher Biton, the chairman of the Cable and Satellite Broadcasting Council, which regulates broadcasting activities in Israel under the communication ministry, was also furious that the evangelical network never shared its strategy to carry out missionary content. 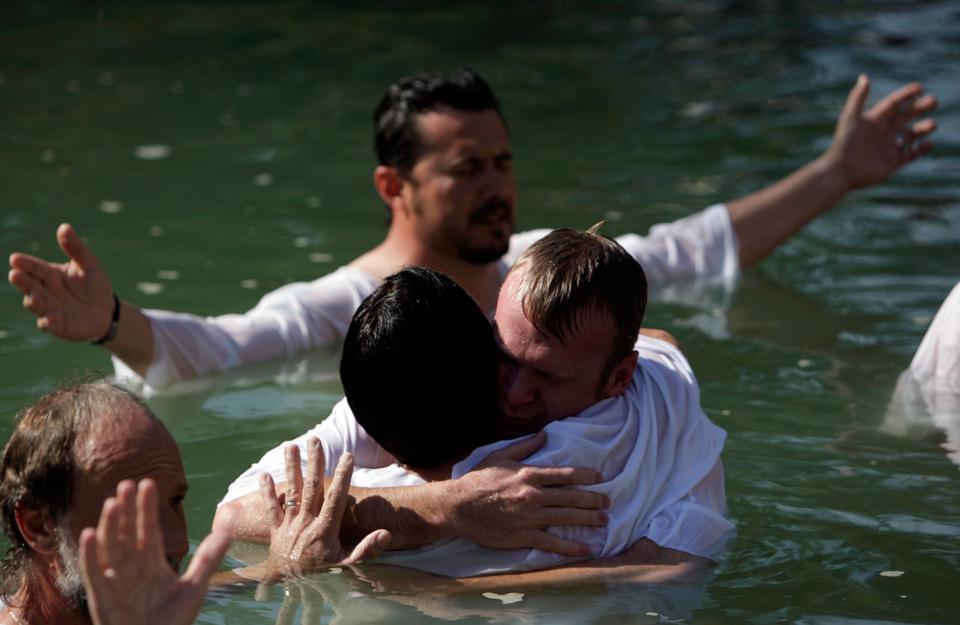 A group of evangelical Christian pilgrims take part in a baptism ceremony in the Jordan River near the northern city of Tiberias October 18, 2008. (Eliana Aponte / Reuters Archive)

But for Simpson, it shouldn’t come as a surprise as missionary work is a founding principle of his organisation.

“This subject preaching about Jesus is a touchy one [in Israel]. We do understand that. We have to be sensitive to it,” Simpson admitted.

Jesus was born, lived and died as a Jew. Later in life, his teachings, which reached out to Gentiles, or non-Jews, to convert them, went against the essential Jewish doctrine of Jews as the ‘chosen ones’, and differed from mainstream Judaism.

Eventually, friction emerged between his disciples and other Jews, who wanted to follow the old way of Judaism, leading Jesus’ Jewish followers to found the first Christian church in the first century AD.

Simpson, who is an ardent supporter of Israel like many other Evangelicals, appears to use the fact of the origin of Jesus and his first followers to reach current Jewish communities in Israel to pull them into Christianity’s Messianic message. 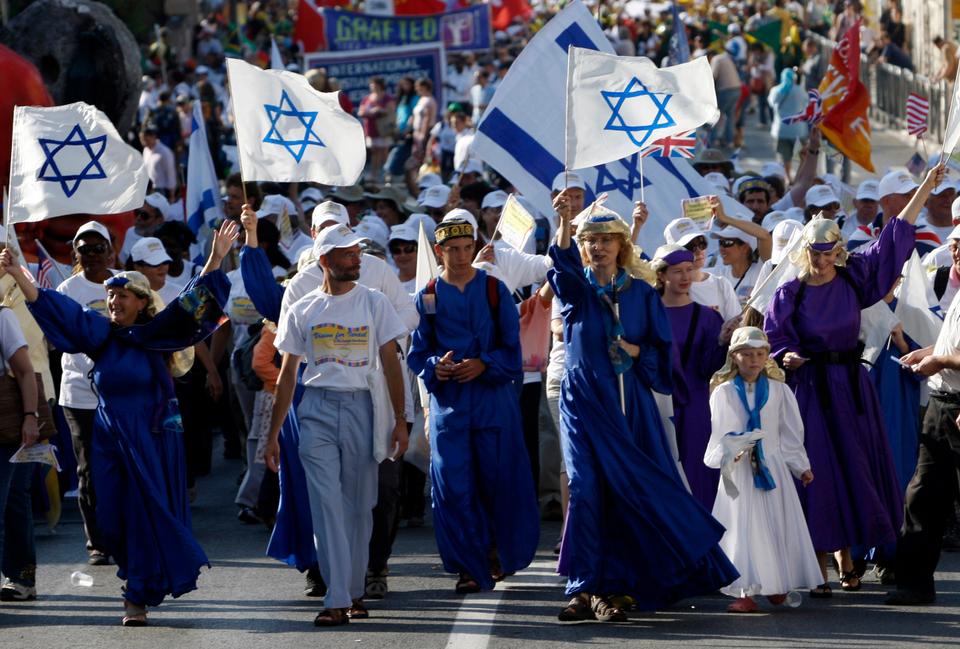 Israelis and its Evangelical supporters march in an annual parade during the Jewish holiday of Sukkot in Jerusalem October 15, 2008. (Baz Ratner / Reuters Archive)

“Our Messianic Jewish brothers and sisters don’t convert. They continue to live the lives of Jews. They just believe Yeshua [Jesus] is the messiah, and they follow him,” Simpson said.

But in a previous video, which was taken down from the network’s website after the Israeli ministry announced the investigation against Shelanu, meaning ours in English, he also insisted that Jews desperately need Jesus’ message more than anything else.

In the Holy Land, “Jews and Arabs are dying every day without Jesus. This can’t continue,” Simpson warned, rationalising God TV’s broadcasting.

“They watch secretly. They watch quietly,” he said, referring to how Israeli Jews follow the channel’s content.

“Men and women, who are sitting. Those are the same ones that spat the name of Jesus. When they are sitting, the holy spirit … (inaudible) to their works, lives and hearts and begins to reveal Jesus the Messiah in their own tongue,” Simpson recounted, referring to the fact that his channel is airing its content in Hebrew.

“What a day of rejoicing that will be,” an excited Simpson added.

But not many Jews appear to be as joyful at receiving Simpson’s message.

“Unfortunately, though, there are still some big, powerful people out there who can’t let go of this evangelising, and that CEO who says he’s going to bring the gospel here in Hebrew – he’s not the kind of guy I’m friendly with at all,” said Sondra Baras, the founder and Israel director of Christian Friends of Israeli Communities, which aims to support illegal Jewish settlements in the West Bank. 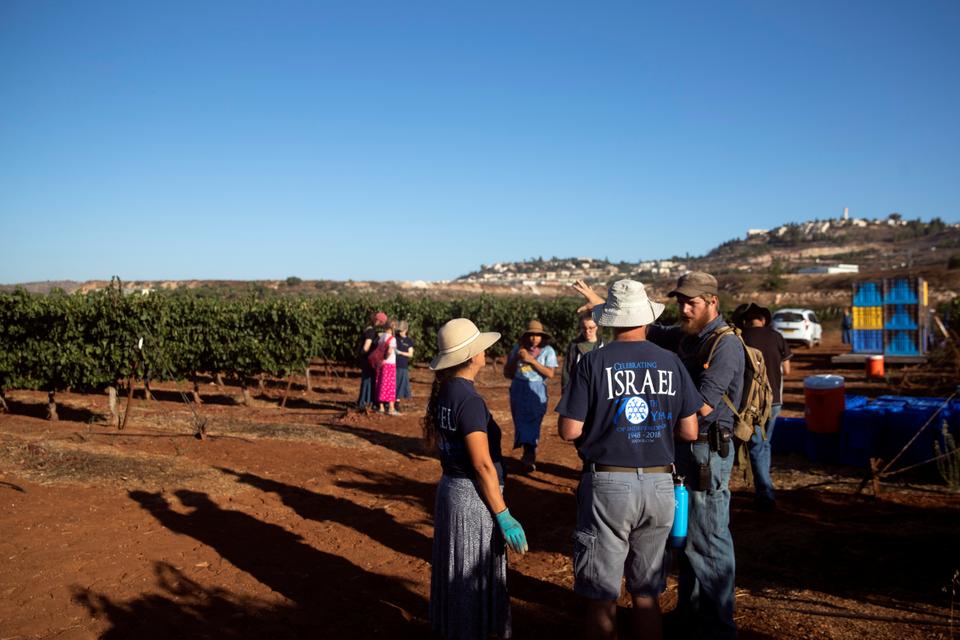 Volunteers of the US-based Christian group HaYovel harvest grapes at a vineyard on the outskirts of Har Bracha settlement in the Israeli-occupied West Bank August 26, 2019. (Ronen Zvulun / Reuters Archive)

“I want nothing to do with him,” Baras declared, in a clear warning shot to Simpson.

But Simpson’s group has already known the difficulties of preaching in a country which claims to be secularist but through a new law has explicitly specified the nature of Israel as the ‘nation-state’ of Jewish people.

“This has never been done before. We have tried to fly below the radar, not because we are ashamed or seeking to hide anything, but because the [Jewish] Orthodox community will do anything to keep the message of Yeshua out of this country. Please pray,” wrote Ron Cantor, the God TV regional director, previously in a letter to the country’s Messianic Jewish community.

Despite God TV’s plans, its Evangelical message has appeared to run into a wall, inflicting damage to relations between the two political allies.

“I’m trying to convince other Israelis that we can start to trust Christians once again, and that they do not have ulterior motives – and, lo and behold, God TV is demonstrating that there are in fact very clear strong ulterior motives in their support for Israel,” Rabbi Tuly Weisz, an American Orthodox rabbi, who emigrated to Israel, told Haaretz, alleging that Evangelical backing of the Zionist state is based on the assertion that Jews could potentially convert to Christianity.

“It is entirely damaging to everything I and others in the religious community, who love Christian Zionists, have been working toward. It sets us back 10 years,” the Orthodox rabbi said. 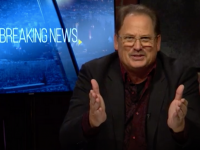