Analysis | With the 25th Amendment, Trump Could Become a Martyr for the Christian Right

If members of Trump's cabinet invoke Section 4 of the 25th Amendment and remove the president from office, it may ensure Trump’s legacy among his millions of evangelical followers 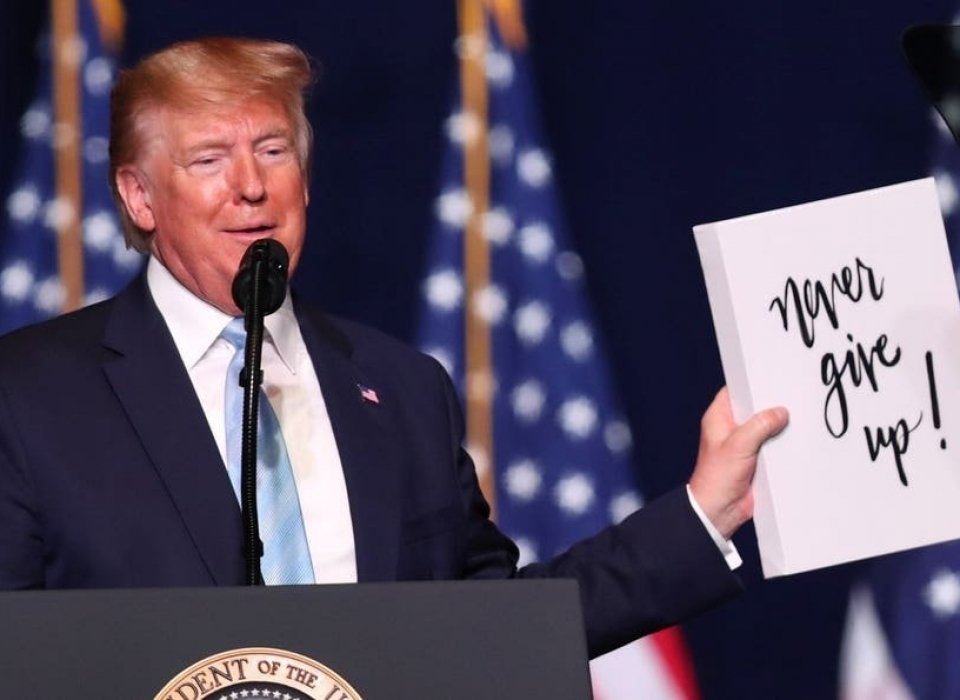 President Donald Trump holding up a sign reading 'Never give up!' given to him during a "Evangelicals for Trump" campaign event in Miami, Florida, January 2020.Credit: JOE RAEDLE / GETTY IMAGES NORTH

Christians love Jesus. That goes without saying. They regard Jesus, who died for our sins, as the archetypical martyr. But right-wing Christians in America also love Donald Trump. Maybe “love” is a strong term here, but they cut a convenient deal with him.

With Trump nearing the “end of times” phase of his chaotic presidency, they have one chance of immortalizing him as a martyr: Have Mike Pence, a devout evangelical himself, invoke Section 4 of the 25th Amendment and remove Trump from office in the aftermath of the January 6 insurrection on Capitol Hill.

Nothing will constitute a more enduring legacy for Trump than “They couldn’t deal with me, so they rigged the election and then removed me.” Soul food for the believers, a narrative for the ages.

In the year 64, a wild fire ravaged Rome, destroying 70 percent of the city and leaving more than half its population homeless. One of the enduring myths of that inferno is that the unpopular, broadly reviled Emperor Nero “fiddled while Rome burned.” The historian Tacitus wrote that Nero sang as Rome was incinerated. There are apparent historical inaccuracies in that story: There were no violins then, and Tacitus admitted that there were no eyewitnesses to Nero’s karaoke jam, just convenient hearsay. Yet the myth prevailed.

So was Donald Trump fiddling while Washington was proverbially burning? Luckily for us, Twitter is a better and more accessible source than Tacitus. But Trump wasn’t just fiddling on Wednesday night. He has been fiddling for four years. Every single one of the 1,447 days Trump spent in the White House before January 6 was a preamble to that sad day.

Unlike Nero, this was not entirely a one-man-show. Trump could not have done this without the enthusiastic support of an unholy alliance of enablers, cynical, unscrupulous politicians and a cult-like following.

They are not all like him. Many are genuinely uncomfortable with – and feel unwelcome in – the diverse, heterogeneous America they have seen evolving in the last 20 to 30 years. Some are uneasy with Trump’s behavior and demeanor. But they all deeply hate his detractors.

In a loose analogy, Trump’s supporters, the types that stormed Capitol Hill Wednesday, are very similar to Benjamin Netanyahu’s most hard-core fans in Israel. They may not like him. But they hate his haters more, and they feel he’s fighting their fight against a condescending, prohibitive and alienating elite.

Trump’s disrepute and discrediting of the presidency, abuse of power, debasing of institutions, disregard for facts and science, his perennial mendacity, the excessive daily use of lies and fabrications, his confrontations with the intelligence community, law enforcement and the media, were all enabled, tolerated and encouraged by congressional Republicans and a “Trumpist coalition” of voters.

Among the different factions represented in that coalition, none was larger and more influential than the Christian right. Hillary Clinton was just too much to fathom for them after eight years of President Barack Obama. They made a simple moral choice: We will tolerate and accept Trump’s sins, shortcomings, immorality and crude behavior as long as he appoints “our” kind of judges. He did, with zeal.

But in last November’s election, something impossible happened: 74 million Americans – “real Americans,” not the fake cosmopolitans of New York, Los Angeles, San Francisco or Atlanta – voted for him. But lo and behold, the magic was gone. His chaotic, vociferous, angry, scandalous term was weighing too heavily on most Americans, over 370,000 of whom died of COVID-19 – a pandemic he spectacularly mismanaged by denying its existence and potency.

Over 81 million Americans voted for Joe Biden, a Democratic coalition that offset on all levels the white Christian right and new Confederate, disillusioned Trump coalition.

A formative and durable narrative had to be found to explain how this travesty happened. How could it be that America rejected a man so beloved by “real Americans”? How could God end the presidency of the man who stood up to the liberal, cosmopolitan, globalist, anti-Christian elite?

Trump, cognizant of his impending defeat, preempted it by doing a bold, simple thing: announcing months before the election that it was rigged. Then came Election Day, and then came the aftermath. A new narrative was forged: He actually won. By a landslide. Millions of votes were doctored or fraudulent across six states. People told him; people say. And people don’t lie. Why would Rudy Giuliani or Ted Cruz lie? Never.

No. It was the “deep state,” the fake media, the witch-hunting legal establishment, the disloyal intelligence and law enforcement agencies – they all set out to get him, the greatest president ever. Exactly like they irreverently do in Israel to Netanyahu, the greatest prime minister ever. The system just can’t handle such stable geniuses, so the system rigs the courts and the legal process, and the media carries their water.

A popular vote defeat of over 7 million, 62 failed court appeals, 50 states certifying their election results: these were all minor hurdles. The narrative had to prevail. Until the tiger Trump thought he had tamed and could ride, safely and indefinitely, took him too seriously and performed a quasi-insurrection on Capitol Hill.

Capitol Hill was last breached by the British in 1814. Between 1861-1865, a Confederate flag was never displayed in Washington. No one had ever worn a “Camp Auschwitz” sweatshirt or a “6MWE” (“Six million wasn’t enough”) T-shirt on Capitol Hill. All that happened for the first time on Wednesday.

A man with a Camp Auschwitz shirt, on the back it says Staff. And a man with a shirt that says 6MWE, which means 6 million weren't enough. #Fascism2020 #CapitolBuilding #Capitol #January6th #TrumpIsAFascist #MagaMadness #CoupAttempt pic.twitter.com/tGs9SPq1ta

So, the day after, with Trump’s narrative going down in flames among rank-and-file Republicans, including Vice President Pence and Senate Majority Leader Mitch McConnell, and his entire pseudo-presidency going down in ignominy, talk of the 25th Amendment suddenly resurfaced a year after Trump was impeached by the House of Representatives.

Section 4 of the Amendment, which has never been exercised, is the interesting one. This provision provides a constitutional process whereby nine government officials could separate the president from his powers and duties, with the vice president immediately becoming acting president.

If some Republicans really want to remove Trump, that’s the way to go. And perhaps Trump himself, though he will object, kick and scream on the way out, will also benefit from such action. He will lose the presidency earlier than expected – but will live forever in the minds of his die-hard supporters as a tortured martyr.

Alon Pinkas is Haaretz’s new senior writer on Israeli and American politics. Get email alerts for every new Haaretz article by Alon by hitting the "Follow" button at the top of the page (by his photo). You can follow him on Twitter at: @AlonPinkas