Translated by Abraham A. van Kempen

Cheers after Floyd's case ruling, but "it shouldn't end with Derek Chauvin."

Police brutality! After the jury's verdict in the case against Derek Chauvin is heard in Minneapolis. President Joe Biden said that "there is still a long way to go." 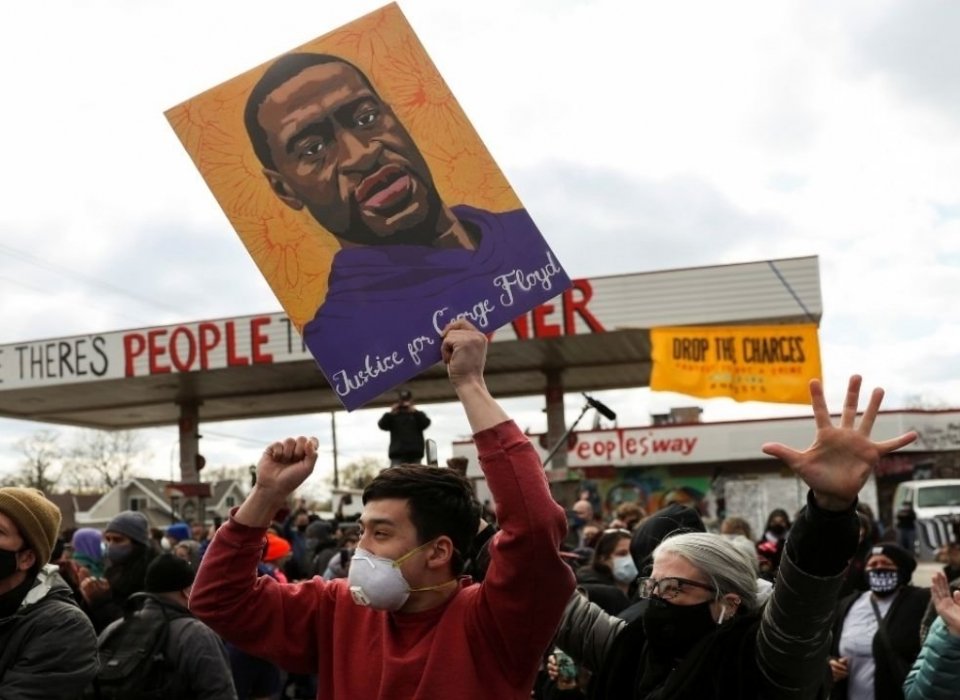 At the spot where George Floyd died, people were cheering after the jury decision was announced.
Photo Latif/Reuters

Sobbing, a woman descends on the makeshift monument at the intersection of Chicago Avenue and E 38th Street in Minneapolis. "This is for you," she says to a painted portrait of George Floyd.

A burst of joy, disbelief, tears, and cheers immediately after the jury found the officer who killed Floyd guilty of all charges. People were crying into each other's arms at the courthouse and on the street corner where Floyd died on May 25 last year.

In a short speech, President Biden praised the jury for the "good verdict. This could be a big step in the right direction," he said of the conviction.

Within an hour, the mood in Minneapolis has turned from elated to subdued and thoughtful. Last year, speeches were delivered at the intersection, renamed George Floyd Square, by activists and local residents. A funeral fanfare plays softly through it. The deep scent of frankincense and paraffin permeates the crowd. "This conviction is not our goal," says young filmmaker Taylour Redmond, listening with a pink rose in hand. "It must not end with Derek Chauvin."

Derek Chauvin is the cop who put his knee on the handcuffed Floyd's neck for 9 minutes and 29 seconds until he was dead. On Monday, his lawyer pleaded for release in his final speech. Ten hours later, the jury reached a unanimous verdict: Chauvin is guilty of the three charges brought by the prosecution. The most severe charge, culpable death in an assault, can result in up to 40 years in prison. The policeman, now fired, was taken away from the courtroom in handcuffs. It is expected that it will take another two months before the judge determines the sentence.

The conviction, like the rest of the trial, was broadcast live. In various parts of the country, people took to the streets to celebrate the jury's verdict - or to challenge the police ("killer cops!"), as in the capital Washington DC. In anticipation of the jury verdict, stricter security measures had been announced in many cities. In Minneapolis, many shops and restaurants were closed, and when they were open, their windows were boarded up.

Hence, Vice President Kamala Harris began her response to the verdict by saying, "Today we breathe a sigh of relief." Afterward, reactions came from Floyd's former girlfriend ("I knew it would be "guilty") to former President Obama, who said that "justice is much more than a single verdict in a single trial."

That became the chorus of the reactions. Joy at this one case, relief that the jury so quickly and so utterly found Chauvin guilty. But also, that "there is still a long way to go," as Biden said. The president also concluded that a statement like Tuesday's "is too rare."

"We still have the police on our necks," Charles McMillian told the crowd gathered in George Floyd Square. Sixty-one-year-old McMillian has become a celebrity after he burst into tears at trial at his testimony because he believed he had acted improperly. On May 25, 2020, he and a group of people watched as Officer Chauvin remained seated on Floyd's neck while three other officers kept the bystanders at bay. McMillian called out to Floyd to obey the officers and not resist. Floyd, handcuffed, on his stomach and with the cop on his neck, gasped that he wasn't fighting but couldn't breathe.

"It makes no sense to go against the police," says McMillian once again through the microphone. "Because they put drugs in your car to beat you up, they beat you up."

One of the exceptional circumstances of the Chauvin trial is that several of his colleagues and officers from the police force testified against their former colleagues. Usually, prosecutors encounter a so-called "blue wall" of silence when prosecuting a cop.

Despite these testimonies, the police are still considered an opponent of at least the protesting Minneapolis residents. "Do you feel protected by the Minneapolis Police Department?" one of the speakers asks rhetorically. "No," shouted the audience. "I didn't think I would ever see a white police officer convicted of murdering a black man," said Pastor Angela Caban.

A few activists stand on the roof above the intersection and watch the crowd. "Be careful." There are also provocateurs among us here and now," said one speaker. "They want us to behave as wanted. They don't believe we can demonstrate peacefully."

Both President Biden and Minneapolis Chief Medaria Arradondo urged protesters to testify their joy peacefully. "We cannot allow those who are trying to use the emotions of this moment to destroy and plunder the pleasure of getting away with it," said Biden.

The president and vice president underlined in their speeches that legislation is needed "to combat structural racism against black and brown people," as Biden said. Harris pointed to the law she filed as a Senator last year to prevent violent police crackdown. She urged the Senate to pass the George Floyd Justice in Policing Act swiftly. 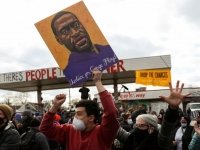