What Does Christianity Say About One People, One Land, One God?

When asked on my first day in kindergarten, ‘where were you born,’ I sparkled with pride: ‘Palaestina!’ Palaestina, pronounced in Dutch, sounded so exotic. 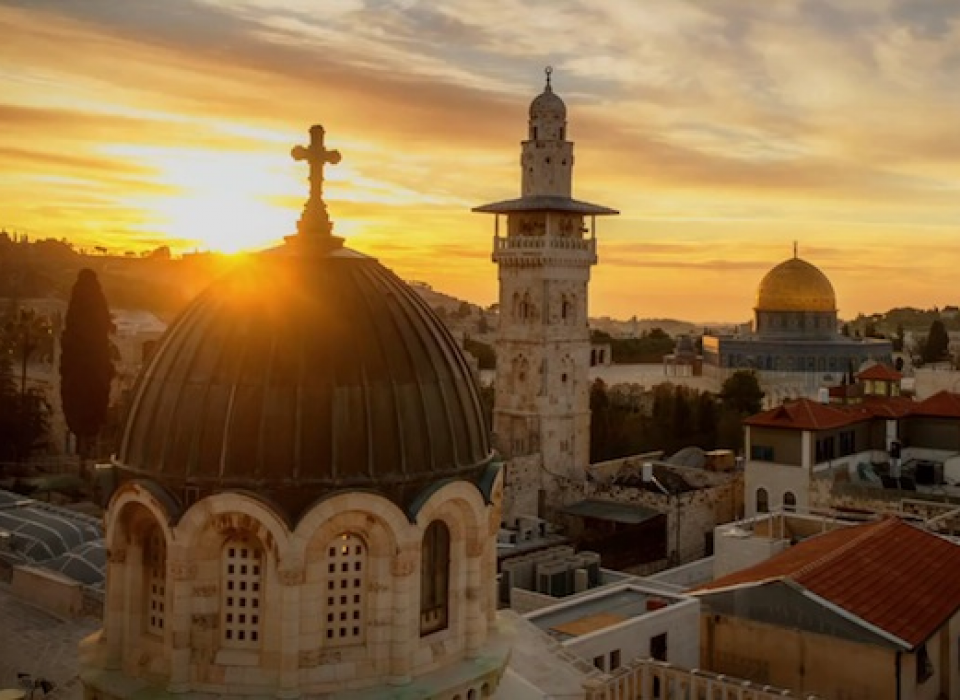 Later, I realized I was born a refugee, onboard a British ship on the Red Sea, of Dutch parents on the outskirts of Israel-Palestine, with a dual nationality, English and Dutch, making me more European than most (but I look Kamaāina, Hawaiian; a long story). To complicate matters, I was born a Jew in Palestine; one, born without borders. My mother was Jew.

With these words and the ones below, I introduced 'Christian Zionism ... Enraptured Around a Sacred Cow.'

The region is home. Inside my soul and within all of my being, I am attached to the splendor of its many colors, their tints and hues; and, ALL my people. I understand intuitively why neither the Palestinians nor the Israelis will ever leave.

My story is the story of many Jews. We are blessed with diversity. That we are one immortal pure-race tribe, exclusively begotten from the seeds of Abraham is spiritual. Physically, it is improbable and genetically, implausible. Nonetheless, myths abound.

What is not mythical is that many indigenous Palestinians are more heritably linked to the Ancient Israelites than most European Jews who have wandered into the Region, seeking refuge from 1,900 years of persecution, especially after World War II. Historically, many Jews in the Diaspora descend from pagan converts into Judaism.

Will a shared identity prompt the ‘cousins’ to share the land? Is there another choice?

The New Testament ‘in-gathers’ and redeems ALL people, not just one tribe; ALL the nations, not just one state; indeed, glorifying the ONE ‘I Am’ with Many Names – in Hebrew: Hayah Asher Hayah, ‘I Will Be Who or How or Where I Will Be’ or just Eloah; or, in the Arabic sound-alike, Allah.

Christianity's New Covenant 1) frees Modern Jews from their Jews-only, ancestry-ghetto-mentality; 2) renounces Modern Israel's obsession for possession of a Land once promised and fulfilled; and, 3) refutes the Israeli edict: "What is mine is mine, what is yours is mine also."

When theology becomes too puzzling and perplexing even for the theologian; and geopolitics, too convoluted for the politicians; students, scholars and researchers, and just plain folk from all walks of life come out of the woodwork to help disentangle the ambiguities, to combine the contradictions creatively. What sort of people are they? People with common sense!

“A mind stretched by a new idea can never go back to its original dimensions,” says Holmes.

And what is salvation? God, 'living' inside your soul! He is part of you and you are part of Him. Salvation is being cognizant, mindful and aware -- the consciousness -- that God, through His Spirit, His Omnipresence, dwells within you. You know you are 'saved' when you know incontrovertibly that God's Spirit and His Kingdom resides within you as evidenced when you treat the 'other' the way God treats you. But your will supersedes God's presence. You've got to want and walk the many steps on your own to love your enemies as God loves you.

We are all chosen – invited – to be redeemed, to be welcomed into the Kingdom of God. Just ask in faith! From that moment, you’re enveloped in His Spiritual Kingdom with the indwelling of God’s Holy Spirit inside your conscience. Eternity starts at the moment of salvation.

'Christian Zionism ... Enraptured Around a Golden Calf' examines why many Christians are confused and bewildered when it comes to the Promised Land?

Where is the Promised Land? Wherever God is! Hallelujah!

Mankind cannot live up to the Law of Moses! Gracefully God amends the Law with redemption. “I’ll redeem all their sins on the cross,” God says. Jesus Christ, the Messiah, dies on Calvary, sacrifices His blood for all of mankind -- Jews and Gentiles --, rises from the dead and returns to heaven. But before He ascends into heaven, He grants us a Divine Surprise: the indwelling of God’s Holy Spirit combined with God’s Spiritual Kingdom, potentially inside every one of us.

God has never left us. One is free to leave Him. That's 'free will.' Nonetheless, God believes in us.

When will Christ return? When Christians Share and Witness the Good News; NOT the talk, the WALK!

14 And this Good News about the Kingdom will be preached through all the world for a witness to all people; and then the end will come (Matthew 24: 14 Good News Translation GNT).

Are you mindful – alert, aware, cognizant, conscious, heedful – of God's presence within you, inside your being, your soul? Are you mindful of others around you?

God says: "love me ... AND, love your enemies." Loving God is easy. Loving your enemies without God is impossible.

The people of Israel - Palestine must and are meant to be living side by side within one homeland inside two borderless zones, rejoicing freedom of movement and the right of passage, sharing Jerusalem and the Region to, gradually, become a light of all nations.

What's stopping them? The 15 million + Israelis and Jews alive today or the powerful, politically-connected 70 million Evangelicals in the US with 600 +million followers worldwide?

“Blessed are the peacemakers for they will be called children of God.”

Aleksandr L Solzhenitsyn reminds the best and the worst of us: “… truth eludes us as soon as our concentration begins to flag, all the while leaving the illusion that we are continuing to pursue it. This is the source of much discord. Also, truth seldom is sweet; it is almost invariably bitter." To paraphrase Solzhenitsyn, I am sharing with you a measure of bitter truth.

‘Christian Zionism … Enraptured Around a Golden Calf’ hopes to guide Christians back to the Land Without Borders. So often, we navigate the highways of life, thinking we’re on the right track, only to discover we’re about to hit a brick wall. To reset our coordinates, we rely on tools, like a hammer to smoothen our dents caused by the many bumps on the road.

Some pick up their hammers to shatter glass, to harm, injure and destroy.

Others work their hammers to forge steel, to shape something that lasts.

It's a love feast sharing this theo-geo-political eye-opener expounded with compassion, common sense and conviction; sprinkled with lots of personal anecdotes; and, amplified with 500 + quotations, excerpts and testimonials, including more than 150 biblical references.

I look forward responding to your reaction.

With every good wish to you, dear reader, I am,

"Prayer is not only speaking but, above all, listening."

7 Then a cloud appeared and covered them with its shadow, and a voice came from the cloud, ‘This is my own dear Son— listen to him!’ (Mark 9: 7 Good News Translation GNT)

The above article is the introduction of 'Christian Zionism ... Enraptured Around a Sacred Cow.'

Getting to Know the OTHER and One ANOTHER

‘Christian Zionism … Enraptured Around a Golden Calf’
By Abraham A. van Kempen

Global distribution has kicked in. Soon, you can purchase ‘Christian Zionism … Enraptured Around a Golden Calf’ wherever books are sold. 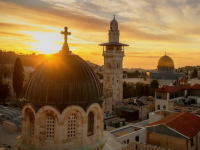 Love your content and style. I have come to the same conclusions over the last 10 years or so after languishing for decades under the shadow of Dispensationalism.