The day Netanyahu, trying to stop a pandemic, told us not to kiss

No handshakes, hugs. Caps on weddings, communal prayer, concerts. No overseas travel. We’re being asked to rethink human contact, but it might be the only way to live 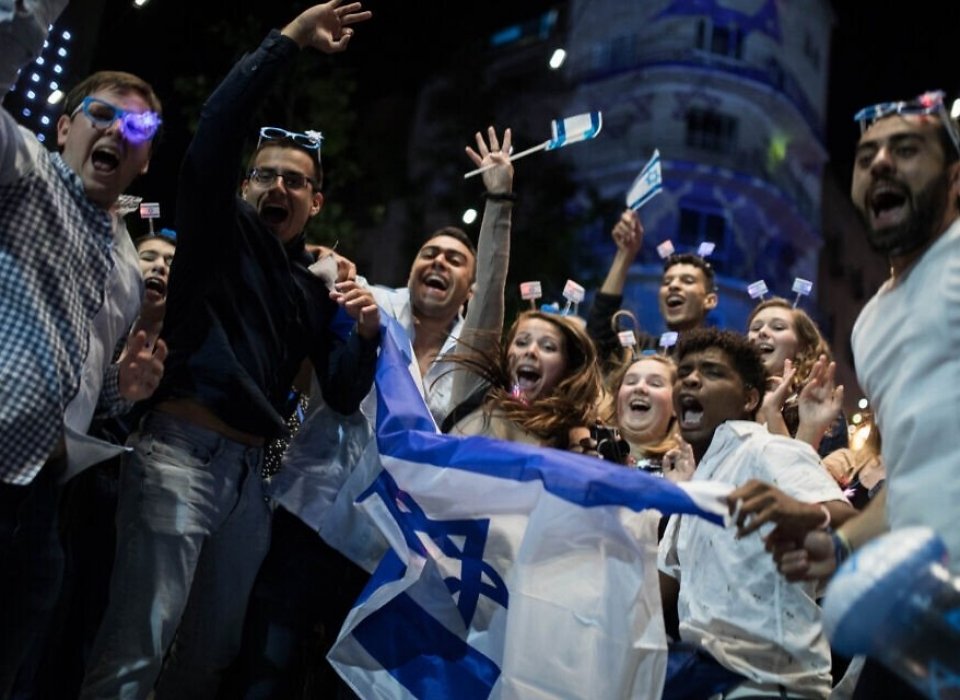 More than half a lifetime ago, on our honeymoon, my wife and I flew to a Far Eastern country with draconian anti-drug policies. As the plane began its descent, a voice came over the speakers to warn us bluntly that “the penalty for bringing in drugs is death.”

I remember that we looked at each other and gulped. We didn’t have any illicit drugs with us; we didn’t use illicit drugs. But the announcement’s flat certainty of death for offenders was scary nonetheless.

A few days ago, I held the newest addition to our extended family — my first great-niece, less than a week old — in my arms for the first time, snuggling her gently for a few precious, magical minutes. And for several days after that, I monitored my own health with atypical attention, terrified that I might somehow have come into contact with someone carrying the coronavirus, and might in turn have passed the infection on.

As of last night, along with all Israelis, I’m essentially being asked to think twice about all such instinctive, nurturing, essential human interaction. My prime minister has told the nation not to hug, not to kiss, and not to shake hands. He and his advisers have warned us it’s safer not to spend too much time in close proximity to others. (Presumably our nearest and dearest are exempted… once we’ve used the hand sanitizer… and provided they’re not too old.)

They’ve ordered the cancellation of a wedding so many of our friends were looking forward to. Going to watch soccer is off; most concerts and plays too, apparently. Livelihoods are disappearing, in travel, tourism, restaurants, stores; it’ll only get worse. I felt I had to check with my folks yesterday that it was okay by them for me to visit. Some very close members of my family are overseas for various reasons, and it’s far from clear how they’ll be able to come home when they need to. We certainly can’t go and see them without quarantine restrictions on our return, if the planes are still flying…

On our honeymoon trip, unnerving though that death penalty announcement was, we were able to shrug it off fairly rapidly. We didn’t have drugs, so we knew we had nothing to worry about. 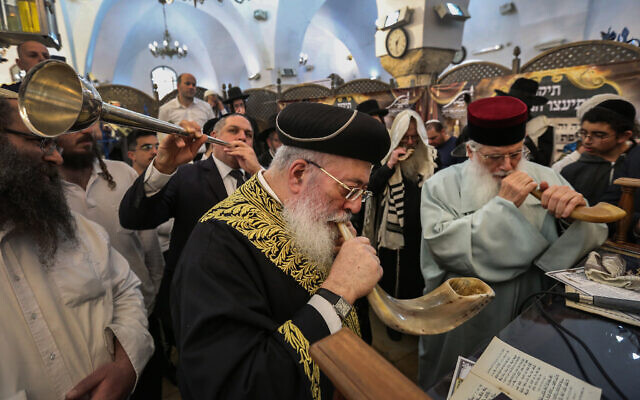 Sephardi Chief Rabbi of Jerusalem Rabbi Shlomo Amar, Rabbi Yechiel Abuchatzeira and rabbis from the Or Hashravi Yeshiva in Meron take part in a special prayer to stop the coronavirus pandemic, at the Rashbi gravesite in Meron, northern Israel, March 9, 2020. (David Cohen/Flash90)

For readers outside Israel, and especially in the United States, some of the above may sound a little ridiculous. I’ve had quite a few conversations in recent days with friends in the States who, I can tell, don’t quite know what I’m talking about when we get onto the subject of the virus.

I might be wrong, but I suspect that’s going to change in the near future. The new US ban on flights to and from Europe is a broad hint. As of last night, after all, humanity is facing what has now been acknowledged as a global pandemic.

The Chinese, and the Italians, and the Iranians certainly know what I’m talking about. And have hundreds upon hundreds of reasons for wishing their governments had long since imposed these rules, issued these warnings. 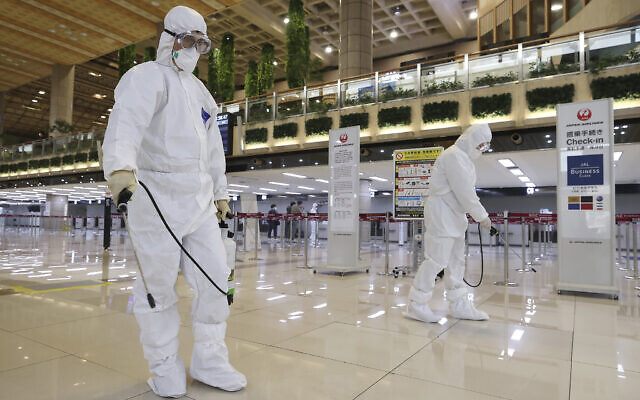 Workers wearing protective suits spray disinfectant as a precaution against the coronavirus at the Gimpo Airport in Seoul, South Korea, Tuesday, March 10, 2020. (Lee Ji-eun/Yonhap via AP)

It’s hard to figure out how some of the latest regulations and restrictions are going to be implemented. Are Jews to be banned from our crowded, wall-kissing fealty at the Western Wall? Will Muslim attendance at Friday’s Temple Mount prayers be restricted? Are synagogues to be required to shut their doors in the face of the 101st worshiper? Presumably, hospitals are exempt from the 100-person limit on gatherings in enclosed areas, but what about universities? Schools? More decisions, we are told, will soon be forthcoming.

If we’re supposed to have sealed what the Health Ministry Director General Moshe Bar Siman-Tov describes as the “outer envelope,” why was a basketball team from Spain — whose nationals were banned a week ago — allowed into Israel Wednesday, thence to freely walk the streets of Tel Aviv? If we’re now trying to prevent the spread of the disease in the “inner envelope,” then why was an ailing Ben Gurion Airport worker who presented himself at a Tel Aviv hospital on Sunday, and whose wife pleaded with the staff to test him for the coronavirus, sent on his way without even the suggestion that he self-quarantine, only to return two days later in far worse a state, found to be infected, and now in serious condition? 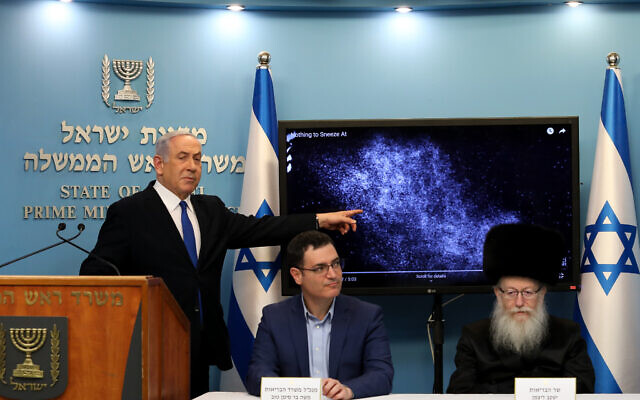 Prime Minister Benjamin Netanyahu, his characteristic assurance belying the radical nature of what he had to say, told the nation last night he was asking us to adjust both our routines and our behavior to beat the virus. “Maintain distance, maintain hygiene,” he said. “Change and sacrifice” some of our habitual conduct, he urged, “in order to safeguard your father, your grandfather and your grandmother.” (What about my mother, I wondered, pointlessly.)

Essentially, he is requiring us to fundamentally remake the way we interact with our fellow citizens: generally, where possible, not to touch each other, nor spend too long in close proximity to each other. 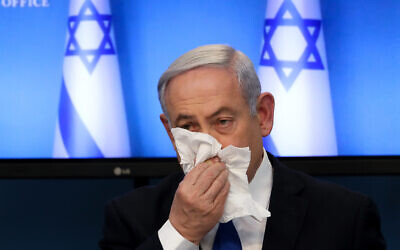 Prime Minister Benjamin Netanyahu tells Israelis to be sure to use tissues when they cough and sneeze, at a press conference about the coronavirus at the Prime Ministers office in Jerusalem on March 11, 2020. (Flash90)

The coming weeks and, it appears, months, will tell whether this new framework for living — the closing of the borders, the bans on largish public gatherings, the advice to stay away from the elderly, the suggestions to work from home where possible — will come to be regarded as a wild overreaction or as our salvation. (Our culture minister announced last night that this year’s Independence Day torch-lighting celebrations will be held without an audience because of the virus threat; that’s on April 28, almost seven weeks away.)  The economic repercussions are already staggering, the psychological impact incalculable.

We’ve endured some of these limitations and concerns in the past, of course, when we worried about being blown up when on buses or in the shuk, or stayed away from buses and the shuk, during the Second Intifada, the suicide bomber years. The threat today is more pervasive and, before its symptoms show, impossible for us to identify. But if we follow the new rules, we are assured, we can ensure it is far less deadly here.

I don’t really believe in divine punishment, though who could blame a higher power for responding punitively to the viciousness so widespread in modern society, to the social media assassins, to the dismal swath of humanity that has long forgotten the core ethical precept of treating others as you would wish them to treat you. To the destruction we have wrought upon this planet…

I don’t doubt that we’ll beat the virus — that the scientists will find a vaccine sooner or later.

But this is certainly not the way we want to live — thinking twice about every human contact, our horizons literally limited. It’s just, we are told, that it might be the only way, for now, to ensure that we and the people all around us can get safely through this. 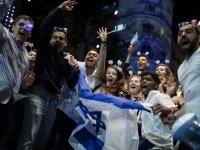