The American Public and the Israeli-Palestinian Conflict, 2000-2020 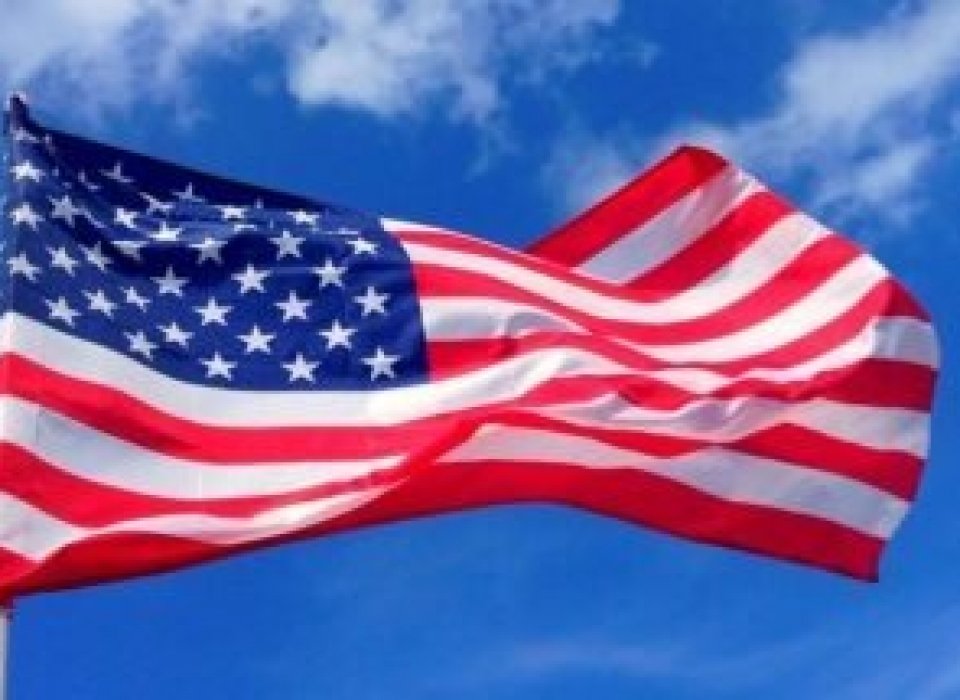 US flag photo by Mike Mozart via Flickr CC

Gallup recently published the results of its 2020 world affairs survey, which included questions on Israel, and the Pew Research Center published a similar report in 2019. Both surveys received considerable attention in the American and Israeli media. Much of the analysis, however, focused on the specific surveys and ignored long-term trends and critical events that may explain the results and place them in historical and strategic context. Long-term trends on three issues require particular attention and analysis: views of Israel vs. the Palestinian Authority, sympathy for the two sides, and support for the establishment of an independent Palestinian state.

Views of Israel vs. the Palestinian Authority

During the first decade of this century, the average favorable-to-Israel percentage was 64%; in the second it climbed to 71%. The highest favorable results were registered in 2018 and 2020, during Donald Trump’s first term as president.

The PA’s scores were exactly the opposite. Since 2000, about 70% of national samples held unfavorable views of the PA. In the first decade, the average was -17% to -70%, and the figures remained similar in the second decade at 21% to 71%. A -67% negative ratio was registered in 2006 following the PA feud with Hamas in Gaza. 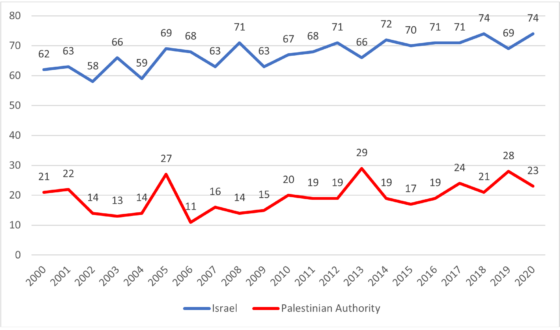 Sympathy with Israelis vs. Palestinians

Since 1945, Gallup has been asking which side inspires more sympathy in the “Middle East situation:” Israelis or Arabs/Palestinians. Figure 2 shows the results for the past 20 years. From 2001 to 2009, sympathy with Israel went over the 50% mark. It moved from 51% in 2001 to 59% in 2006. Since 2010, it has increased further, passing 60%. Twice, in 2013 and 2018, the figure matched the highest score ever of 64%, which was first registered during the 1990-91 first Gulf War, when Saddam Hussein attacked Israel with ballistic missiles and the Palestinians enthusiastically supported his invasion and occupation of Kuwait.

Figure: 2: Sympathy with Israelis vs. the Palestinians

Question: In the Middle East situation, are your sympathies more with the Israelis or the Palestinians? (%) 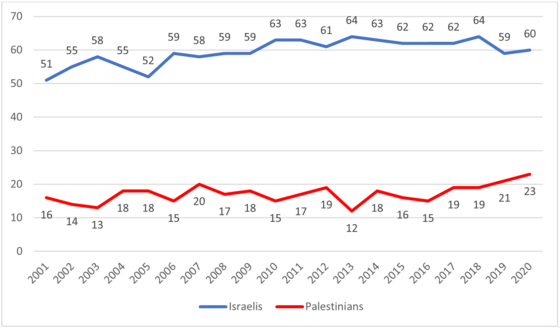 The 2001 low of 51% vs. 16% could have resulted from the failure of President Bill Clinton’s effort to broker a peace agreement and the subsequent violent eruption of Arafat’s war of terror (euphemized as the “al-Aqsa Intifada”).

With the caveat that the sympathy index is very sensitive to events, it reveals substantial and stable gaps in favor of Israel. The largest were registered during the 1991 Gulf War (-57%) and in 2013 (-52%) following the two 2012 violent confrontations between Hamas and Israel (operations Returning Echo and Pillar of Defense). The gaps were the lowest during the 1988 Palestinian Intifada (-22%) and at the beginning of the 1993 Oslo “peace process” (-27%), when it seemed as if the two sides had embarked on a new road to peace. Figure 2 also shows that in the past 20 years, the lowest figure for Israel was 41% while the highest for the Palestinians was 23%, a difference of 18% in favor of Israel. In the past 20 years the average gap in favor of Israel was 58% vs. 17%. In recent years, there has been some increase in sympathy with the Palestinians, but this didn’t necessarily come at the expense of sympathy with Israel.

Support for the establishment of a Palestinian state

A two-state solution to the Palestinian-Israeli conflict, or the establishment of a Palestinian state in the West Bank and Gaza along Israel, has been highly popular for years in surveys on American attitudes toward Israel and the Middle East. During the Oslo years, very few polls directly addressed the two-state solution, probably because all sides assumed it was the only possible option. The issue resurfaced in 2000 during the violent “al-Aqsa Intifada” and after a series of dramatic events in Gaza: the 2005 Israeli unilateral disengagement, the 2006 Hamas victory in the Palestinian elections, and the subsequent 2007 military takeover of Gaza.

Figure 3 shows long-term trends in the Gallup poll from 2002 to 2020. Changes over time reflect the effects of developments in the conflict as well as the views and policies of US presidents, but the graph shows support for a state solution throughout the entire period. The lowest figure was recorded in 2000 during the “al-Aqsa Intifada.” The highest, 58%, appeared in 2003, following the subsidence of violence and the presentation of President George W. Bush’s new peace plan, which included the establishment of a Palestinian state. Slight majorities (51%) supported the idea during first term of President Barack Obama, who strongly supported a two-state solution.

Both the close division and the higher figures may have resulted from Trump’s statements and policies. In 2017, he severely criticized the Palestinians and the Obama administration for orchestrating a resolution (No. 2334) at the UN Security Council on December 20, 2016 declaring the Israeli settlements in the West Bank illegal. Obama had violated the well-established norm of refraining from adopting any significant policy changes between Election Day and Inauguration Day, which always occurs on January 20. This violation was even more serious as Obama knew president-elect Trump opposed his policy and the UN resolution.

The higher figures in 2019 and 2020 could reflect Trump’s inclusion of a prospective Palestinian state in his peace plan. A change in Republican opinion supports this explanation. Republicans continued to oppose the idea, but their opposition had waned in strength by 2020. In 2019, only 34% of Republicans favored a two-state solution and a majority of 53% opposed it. In 2020, the ratio was 44% for it and 48% against it. These results represent -5% in the opposition column and +10% in the support column.

Question: Do you favor or oppose the establishment of an independent Palestinian state on the West Bank and the Gaza Strip? (%) 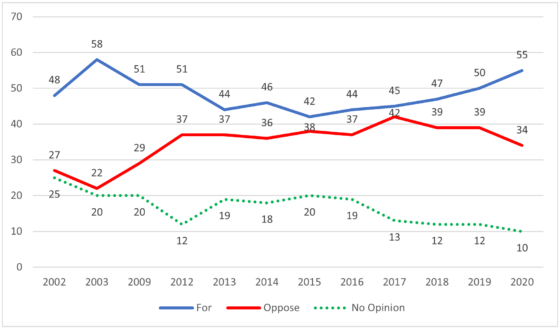 The data indicate that from 2000 to 2020, Americans continued to view Israel very favorably and the PA very unfavorably. This sentiment is probably related to the nature of the political systems of the two sides. Israel is a liberal democracy while the PA is a corrupt, ineffective, and failed dictatorship. The last elections were held there 15 years ago, when Mahmoud Abbas was elected for a four-year term. Gaza is ruled by Hamas, an Islamist terror organization. The sympathy index pitting Israelis vs. the Palestinians shows substantial gaps in favor of Israel.

The confrontations between Obama and PM Benjamin Netanyahu over Palestinian-Israeli negotiations and the 2015 nuclear agreement with Iran did not negatively affect pro-Israel sympathy results. Trump’s policies in favor of Israel, including the transfer of the US Embassy from Tel Aviv to Jerusalem and cutting of aid to the PA and UNRWA, may have increased sympathy for the Palestinians, whom the US media have portrayed as victims of his policies. Similarly, Figure 3 shows that in 2019 and 2020, for the first time since 2003, slight majorities supported the establishment of a Palestinian state. Like the 2003 peak, these results were probably related to the inclusion of a Palestinian state in peace plans proposed, respectively, by Presidents Bush and Trump.

The surveys show results that should worry Israeli leaders. Socio-demographic analysis indicates that over all three of the issues discussed here, Republicans have supported Israel much more than have Democrats. The widening gap threatens to damage the already declining bipartisan support Israel has enjoyed in Washington for decades.

Support for Israel is also diminishing with age. Young voters support Israel much less than old voters. If this continues, it could significantly alter the present favorable trends.

Finally, although most American Jews are still somewhat attached to Israel, they have grown increasingly critical of its domestic policies and approaches to both the Democrats and the pursuit of a resolution to the Palestinian-Israeli conflict.

Note: This article is based on a forthcoming BESA study entitled The American Public and Israel, 2000-2020.

Prof. Eytan Gilboa is former Head of the School of Communication and the Center for International Communication at Bar-Ilan University, an expert on American politics and foreign policy, and a senior research associate at the BESA Center for Strategic Studies. 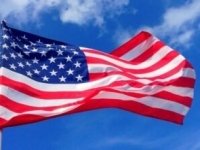