Our Washington Watch | Is What's Good for America, Good for Israel?

Amsterdam | Biden gets cornered, and Trump comes to a boil. They compete for the attention of the Americans as if we were three months before a presidential election instead of three years.

BIDEN ON THE TUBE

I don't think I've seen the president as often in his first term as I have in recent weeks. After a few months, he was criticized for still not having given a press conference. It took more than two months before he, cautiously and within his hand a photo book circled with the names of the only journalists his staff allowed him to question, spoke to the press.

Now it seems like every other day. Not so much with press conferences, which he prefers to leave to the unapproachable spokesman Jen Psaki, as with speeches. Biden is doing what all progressive politicians do when they're not doing well: explaining why their policies are sound once again.

This week's keynote speech focused on the "logistical chain," a concept Biden cautiously explained to reporters in the White House and the country's people (he gave no opportunity for questions). "After weeks of negotiations," Biden said, he had reached an agreement with unions, merchants, and shippers to keep the Port of Los Angeles open 24 hours a day, seven days a week.

It is a stopgap for a problem for which no policy has yet been established: inflation. We've written about it here before. High inflation: 5.4 percent compared to a year ago. Tough unemployment: 4.8 percent. The Ministry of Employment declared that real income has fallen by an average of 0.8 percent in the past year.

These are all real problems that will hurt the president and the Democratic Party as electorally rulers of the moment. Some media are trying to increase the pain by pinning Biden as the cause of all those crises. That is no more justified than the reverse, which you also see: protecting Biden from the attacks. In this category, I thought this was a typical piece, by Ed Kilgore, former political assistant, now analyst, in New York Magazine.

The core of his argument: it's not that bad (inflation was 13.3 percent in 1979!), and Biden has a much firmer grip on his party than President Jimmy Carter at the time.

Israel relations in Congress aren't what they used to be - opinion 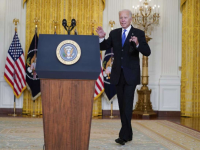