Opinion | Why Are Israelis Scared of Palestinian Identity?

Efforts to build a Jewish-Arab shared society in Israel are needed more than ever. Here are three main obstacles such attempts must overcome 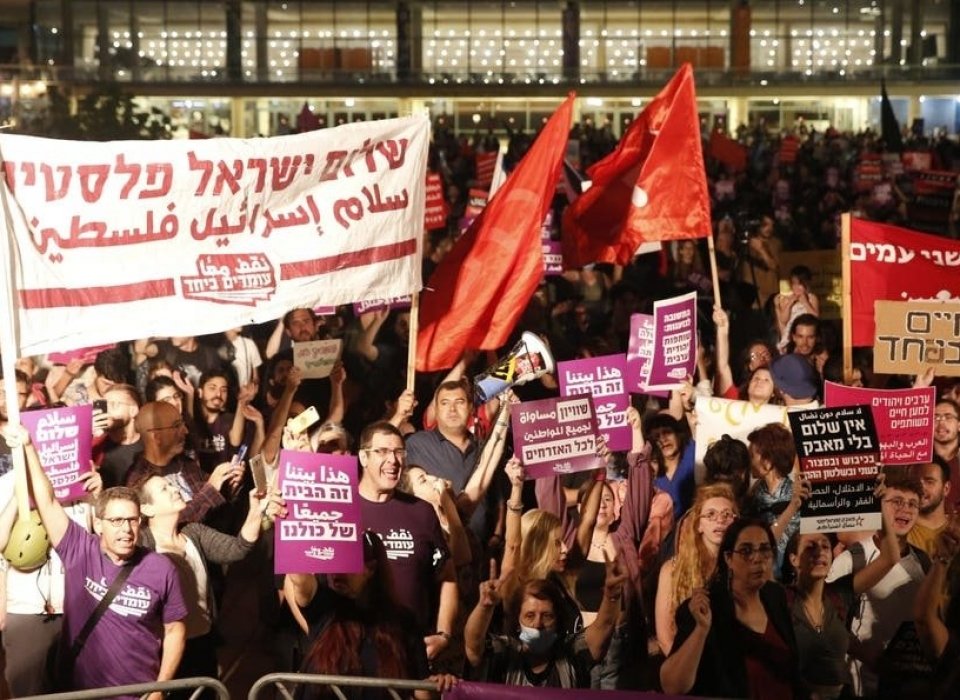 A demonstration in Tel Aviv last May of Jews and Arabs in favor of “shared society.” Credit: Ofer Vaknin

The violent upheaval that embroiled Jewish and Arab citizens this past May generated increased public discussion of the feasibility of a shared Jewish and Arab society in Israel. During and after those events, prominent actors in various sectors – local government, business, organized labor, education and academia, and other public institutions – called for maintaining or even intensifying efforts to forge a shared life. This is a new approach, not evident in prior rounds of escalation between Jews and Arabs inside Israel. Nor is it a typical response to escalation in national conflicts generally, and it was unusual in its scope and force. We think those calls at the height of the crisis were crucial in limiting or reducing the violence and preventing the implosion of relations between Jews and Arabs here.

This new pattern did not come out of nowhere. In the last few years, we’ve seen more and more public spaces and institutions where Arabs and Jews routinely meet, mainly workplaces and campuses. More Arab citizens have also established a greater presence in centers of power and influence.

Additionally, more public agencies and civil-society initiatives have taken steps to include Arab citizens as partners, participants and sometimes leaders in their programs. The process first trended widely within the Jewish left, and then spread beyond it to the political center. This is fortuitous because as the foundations for a shared society for Jews and Arabs become broader, encompassing larger and more diverse public constituencies and public, private and civil-society entities – the stronger and more stable those foundations will become. In turn, those foundations will have greater capacity to support bridge-building between Jews and Arabs, and perhaps even to forestall any future escalation of conflict.

Because this trend is relatively new and fragile, however, our efforts should aim to make it broader and deeper, forging a much more stable basis for a shared society. As two people long active in building partnerships between Jews and Arabs, we want to note that such joint efforts are typically beset by three fundamental problems. In the hope of helping others contend with them, we describe these problems below and offer some key guidelines for action.

The first basic problem often seen in shared spaces and joint organizations is the expectation, often unstated, that Arabs need to choose between their civil identity as Israelis and their national identity as Palestinians – and leave the latter at the door, or at least minimize it, when they enter shared spaces. This expectation becomes conspicuous when national tensions peak or when Arab society protests something. The response from the Jewish side generally includes disappointment and anger when Arab citizens voice their identification with the Palestinian flag or express solidarity with their fellow Palestinians in the West Bank and the Gaza Strip. We’ve witnessed this during protests about the so-called nation-state law and during each round of violence between Israel and Gaza.

Arab students protest in front of Tel Aviv University against the evictions in Sheikh Jarrah and the war in Gaza, this past May.Credit: Moti Milrod

Research and surveys consistently show that the Arab mainstream in Israel identifies as Palestinian; in particular, elected Arab leaders identify as Palestinian. Arab citizens deal on a daily basis with the structural tension between their Israeli civil identity and their Palestinian national identity – given that their state since its inception has been in conflict with their people. During times when there are peaks in the conflict – as in recent days, when six Palestinians prisoners escaped from Israeli custody and tried to hide in Arab communities within Israel; and also at times when violence erupts, such as when Israel bombs their people and relatives in Gaza – coping with those tensions becomes almost impossible. The expectation of Arabs in Israel that they will detach themselves from their Palestinian identity somewhat resembles the expectation among some Arabs that Jewish Israelis will detach from their Zionist identity – and is, in any case, unrealistic. Individuals and groups do not jettison their national identity, especially amid an ongoing national conflict.

Social psychology teaches us that meaningful cooperation and partnership processes between groups in conflict can occur only when each side feels secure in its identity – and never happen when one side relinquishes its narrative, identity and ethos. Moreover, challenging a national identity can often lead to violence. Thus, the Jewish expectation that the other side must choose between parts of their identity, or downplay the Palestinian component, quashes the possibility of broad, solid, authentic partnership, and creates frustration and anger on the part of potential Arab partners. Not only is this not helpful, it actually harms efforts to build the infrastructure for a shared society for Jews and Arabs.

In some cases, this misplaced expectation has led to partnerships with marginal groups in Arab society. This past June, for example, a founding conference convened in Abu Ghosh, outside Jerusalem, of the Forum for a Shared Society whose Arab participants included only those who do not define as Palestinian, and even some who actively fight against the Palestinian identity for Arab citizens. This is an example of actors in the realms of civil society and philanthropy, whose intention is to create a shared society for Jews and Arabs, but who in practice make all the mistakes possible, and thus are actually working against the possibility of true partnership.

Instead of seeking out Arabs who are alienated from, or even fight against, a Palestinian identity, we would advise Jews to be in dialogue with members of the Arab mainstream that identify as Palestinians. We suggest approaching the potential for partnership with curiosity about how Arabs manage to resolve the tension which, from the outside, sometimes appears intractable, between Israeli citizenship and Palestinian nationality. We advise not trying to establish a partnership based on an expectation that one side – the Arab side – must relinquish or downplay its national identity. Rather, we suggest beginning with the assumption that both sides have a solid national identity, and that these identities, the Zionist and the Palestinian, are in conflict, and that one of the aims of the partnership should be to forge points of agreement between both sides. This approach can create possibilities for living with the conflict – while generating spaces for shared action in its shadow and making progress toward its resolution.

The identity of the state

The second basic problem is the expectation that Arab partners must unreservedly accept the existing political framework. That is, they are expected to accept the definition of Israel as a Jewish and democratic state. Worth remembering is that Jews who enter the “shared space,” whether in the organizational sense or in actual mixed workplaces, do so under circumstances in which their collective rights as a society and a nationality are enshrined and protected by the state and its institutions. Meanwhile, these same institutions – some of which promise (but do not always deliver) equal rights to Arab citizens as individuals – are premised on the denial and exclusion of Arabs’ collective and national identities. In such a reality, expecting Arab citizens to willingly adopt the existing institutional situation as a condition of partnership simply replicates the political inequality within that partnership.

Jewish and Arab activists from Women Wage Peace and other organizations protest against the Gaza war and Jewish-Arab clashes, this past may.Credit: Ohad Zwigenberg

One crucial point here is that the rejection by broad swaths of Arab society and its leadership of the current definition of the State of Israel as such is not equivalent to denying the collective and national rights of the Jewish people and the Jewish public in Israel.

It is unfair to expect Arab partners to swear allegiance to the Declaration of Independence and/or the definition of the state as Jewish, which regrettably is what some Jewish leaders in shared spaces do indeed expect. We recommend, rather, that Jewish-Arab partnership processes be based on mutual recognition of the collective rights of both peoples – Jewish and Palestinian – while acknowledging that there is disagreement concerning the character of the political framework(s) that would enable the protection of these rights.

The third basic problem is ignoring or refusing to engage with the most central and urgent aspect of the Israeli-Palestinian conflict: the Israeli occupation of the West Bank and the siege of Gaza. Ignoring the most blatant dimension of Palestinian oppression severely constricts the possibility of legitimate discourse for Arab citizens in shared spaces. It seriously impedes the establishment of real Jewish-Arab partnerships and the ability of such partnerships to promote a shared society for Jews and Arabs in Israel. There is no path to a shared society that is congruent with the denial of the rights of the people, the nationality, to which Arab citizens belong.

We do not expect high-tech companies, supermarket chains, hospitals or other workplaces with both Jewish and Arab employees to conduct dialogue workshops about the occupation or to formulate an organizational policy about it. Nor do we expect that every Arab-Jewish partnership will deal directly with the issue of the occupation. What is crucial, however, is to ensure that, in all such places, it is legitimate to discuss issues involving the Israeli-Palestinian conflict and legitimate to express opinions opposing the occupation. We must not be afraid of the lack of consensus that often attaches to this subject. We should understand that an absence of consensus is going to be part of the fabric of our shared society so long as the Israeli-Palestinian conflict continues unresolved.

The disturbing events of this past May were a painful reminder of the fact that the deepest and most dangerous rift in Israeli society is the national one, between Jewish and Arab citizens. Elsewhere in the world such schisms have led to civil war and to many deaths, leaving entire countries and societies in ruins. The work of building a shared society is among the most crucial and fateful tasks faced by Israeli society. We aspire to build a shared society that is sustainable and capable of successfully addressing the reality of national conflict and even making progress toward its resolution. This demands that it be constructed equitably around the mutual recognition of the identities and rights of both the peoples living here. 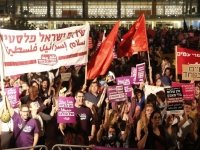