Opinion // I'm Shaving Off My Zionism, the Worst a Man Can Get

The Gillette commercial caused me to look again, more closely, at Netanyahu's Iwo Jima moment. That's when it struck me 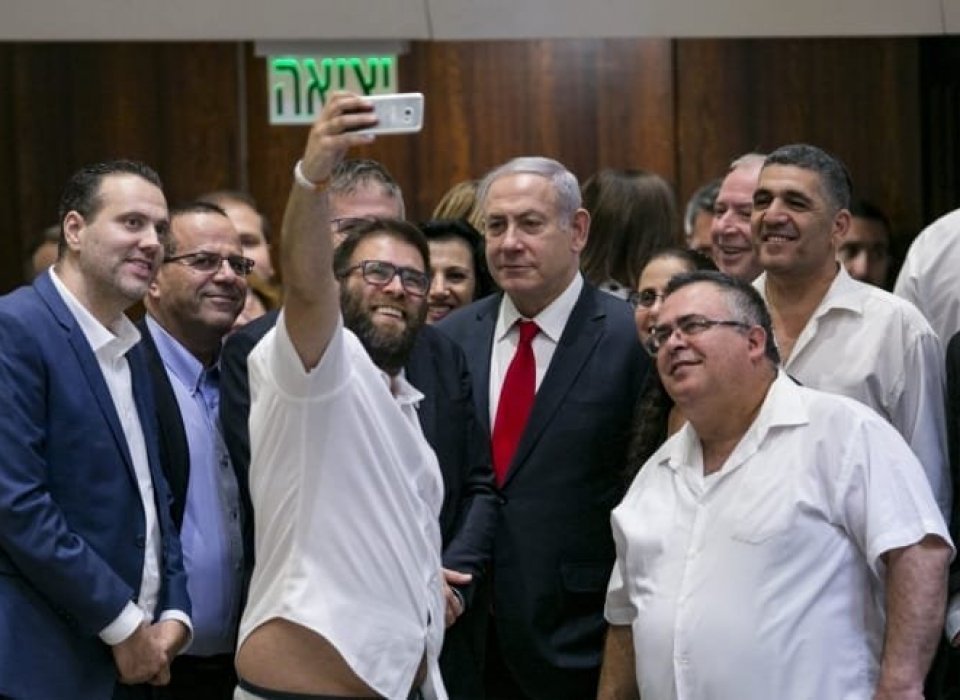 Likud MK Oren Hazan taking a selfie with Prime Minister Benjamin Netanyahu and other coalition members after a nighttime vote on the nation-state law.Olivier Fitoussi

I can't remember the last time a shaving commercial made me think.

It was that Gillette ad. The one whose message to men is, be decent, be a mensch, nurture, comfort, step up and stand with the abused and the bullied, and help protect them.

Years ago, when I was starting out as a wire service reporter, a freshman legislator walked into the Reuters Jerusalem bureau, a youngish man with a good suit, good English, and no manners.

It was Benjamin Netanyahu.

This was no ordinary politician, I began to realize. Most politicians, journalists learned early on in those days, had a remarkable quality of personal charm, a magnetism, an apparent kindliness, an ability to at least appear to be interested in the concerns, the feelings, the humanity of the people they met. Whoever those people happened to be. Whatever their politics.

Not Netanyahu. He acted like he owned the place. Readying for an interview, obsessed with the lighting, he spent 45 minutes ordering everyone around before we even could start. He was rude and officious to the women he came in contact with. He talked down to and bullied the men. He snapped at and badgered all of us to shift the lights, again and again and again, until he was satisfied that his face would come out just right.

Get our daily election roundup in your inbox


This was no ordinary politician, I would come to realize. This was the future.

This was the future of a man who would go on to commandeer and remake in his image a political party, then a country, and then the movement called Zionism - all of which were already chauvinist and otherwise problematic to begin with - and, for his own gain, turn them all into a more concentrated vehicle for what is the worst in us. In men.

Cut to 2019. I have now lived nearly the whole of my life as a man in this place where the concept of a Real Man was understood to be seamlessly intertwined with norms of cruelty, bullying, sadism, condescension, displays of dominance, suppression of compassion, willful deafness rooted in the armor of a sense of infallibility, all of it fueled by a toxic cocktail of perceived supremacism and perceived martyrdom.

And for much of that time, this place has been run by this man who, in many ways we could not have imagined at the time, has made so much of it, so much worse.

The Gillette commercial caused me to look again, more closely,  at Netanyahu's Iwo Jima moment, the testosterone-laced photograph of the prime minister’s Likud men celebrating the passage of the worst, most directly discriminatory bill in the nation's recent history, the nation-state law. In one of those bizarrely useful realizations, it occurred to me how many of these men are poorly shaven. That's when it struck me.

I'm shaving off my Netanyahu Zionism. The worst a man can get.

From the very beginning, Netanyahu had a choice. He could have taken the more courageous, the more decent path, leveraging his personal political capital, his expansive Knesset strength and right-wing clout to seek a just solution for Palestinians in the territories and a truly democratic society for citizens of Israel both Jewish and non-Jewish. He could have been a mature man, a caring man.

That's not for Real Men, Netanyahu signaled, using the Real Man's tool chest of incitement, racism, dismissive sarcasm, cochanut - the uniquely Israeli version of the theory and practice of Might Makes Right - and, to borrow a phrase from the Old, Old Right, biryonut. Bullying.

That kind of Fake Peace policy, Netanyahu’s smirk told his people, is for a wuss, for Yefeh Nefesh, for effeminate men we see as limp of wrist and limp of will, for women we see - or don't see - as not at all feminine enough. That kind of policy is for people who belong to the well-dressed slime and scum who - though they serve in the military and insist that they love this land - are not really Jews at all, not really Israelis at all, not The People, not Zionists at all.

I'm sick of all of it. I'm shaving off the Netanyahu Zionism which condemns as Smolan - literally leftist, but more closely translated as filthy and stinking traitor - anyone and everyone who dares rival Bibi. Including, for example, the undeniably right-wing Likud veteran Gideon Saar, and former army chief turned political hopeful Benny Gantz,

It's gotten so bad that when Gantz this week greeted Druze former IDF comrades in arms with kisses and embraces, and promised to do everything he could to change the nation-state law - legislation which has done more to harm Israel's relations with its Druze minority than any measure ever - a succession of pipsqueak, revenge-of-the-nerds Likud Netanyahu loyalists lined up to denounce Gantz as, yes, the worst of the worst of the worst. Smolan.

This week, the prime minister’s New Boy, He Man Likud newbie Yoav Galant, the very model of the self-adoring and insolent former major general, royally entitled and yet disgruntled as only a He Man can be, summed up the Netanyahu era in one sentence:

“Settlements are the new Zionism of the 21st Century.”

I'm shaving it all off. Piece by piece. Where to start? Maybe by being open and honest about the life example of a man who speaks in such syrupy and as-if heartfelt tones of the values of home and family. This same man who, during his first wife's pregnancy in the late 1970s, had an affair. This man who, two divorces later, while married to his third wife, Sara, had another. And all of it only added to his luster within the Likud, which, after the second affair became public in 1993, elected the relative newcomer – an authentic Man’s Man - as the Likud's candidate for prime minister.

Back then, when I worked for Reuters, we reporters would draw straws to see who would cover Netanyahu and the Likud Central Committee, which in a short time would come to run Israel as a whole. The reporting assignment went to the reporter who lost. And the behavior at the central committee, the swearing, the bellowing, the interrupting, the shoving, the throwing of chairs, the cutting in line and cutting-off in frenzied driving for a certain parking spot, the entire convention of toxic masculinity, became a blueprint for Israeli governance as a whole.

There were still people there who believed in democracy and equality, people like the late Likud elder statesman Moshe Arens and President Reuven Rivlin. Little by little, the party sidelined them and got rid of them.

I'm shaving it all off. Yes, there are Israelis who have done great things, but Netanyahu is not one of them. If we let him, he will kill this place. The finality of occupation, the death of democracy, these are just his weapons. But it's his finger on the trigger.

I'm shaving off my stubble of Netanyahu. His Zionism as well. He can have Zionism all to himself. 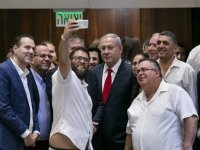