By: KARIN LAUB AND MOHAMMED DARAGHMEH 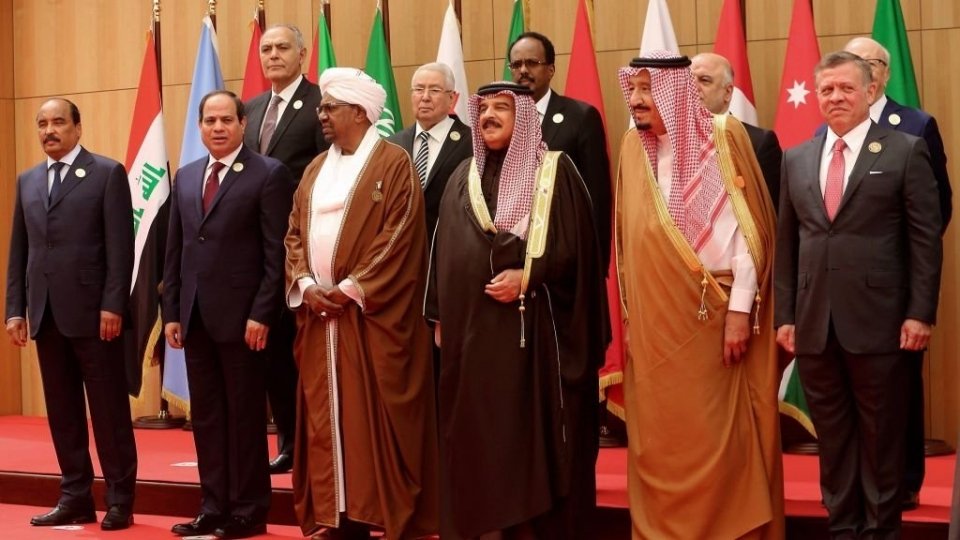 A section of twenty one kings, presidents and top officials from the Arab League summit pose for a group photo, at a gathering near the Dead Sea in Jordan on Wednesday, March 29, 2017. (AP Photo/ Raad Adayleh)

DEAD SEA, Jordan (AP) — Arab leaders held their annual summit Wednesday, poised to endorse key Palestinian positions in the conflict with Israel — a signal to US President Donald Trump that a deal on Palestinian statehood must precede any Israeli-Arab normalization.

Jordan’s King Abdullah told the summit’s opening session that there can be no peace or stability in the region without setting up a Palestinian state alongside Israel.

The Arab summit was to adopt a series of resolutions, several dealing with the Palestinian issue. The statements, subject to last-minute change, were previously endorsed by Arab foreign ministers.

The draft resolutions condemn Israeli policies, including settlement construction, that are “aimed at eliminating the two-state solution and replacing it with apartheid.”

They also warned against moving diplomatic missions to contested Jerusalem, whose eastern sector is sought by the Palestinians as a capital. Trump has said he would move the US Embassy in Israel to Jerusalem, but relocation no longer appears imminent.

Israeli Foreign Ministry spokesman Emmanuel Nahshon said the summit’s focus on the Palestinians is a ploy to divert from the real issues. “We are the ultimate fig leaf for all Arab abuses and failures,” he wrote in a Twitter post.

The Palestinian quest for independence also served as a showcase for Arab unity in a fractured region, where leaders find themselves on opposite sides of long-running conflicts, particularly Syria’s six-year-old civil war.

The 21 kings, presidents and top officials gathered on the Jordanian side of the Dead Sea.

Syrian President Bashar Assad was absent; he hasn’t been invited since Syria’s suspension from the 22-member Arab League following his crackdown on a 2011 uprising that quickly turned into a brutal civil war. Trump hasn’t yet formulated a policy on the Israeli-Palestinian conflict, but has suggested the internationally backed idea of a two-state solution isn’t the only option on the table.

The Palestinians want to set up a state in the West Bank, Gaza Strip and east Jerusalem, lands Israel captured in the 1967 Six-Day War.

On Wednesday, the leaders were expected to reaffirm a 2002 Arab peace plan that offers Israel normalization with dozens of Arab and Muslim countries if it cedes the war-won lands for the creation of a Palestinian state.

This would undercut Israel’s proposal of a regional peace in which normalization with some Arab countries would precede a deal with the Palestinians. Abbas objects to reopening the Arab plan to negotiations, fearing it would further weaken the Palestinian position vis-a-vis Israel. Twenty one kings, presidents and top officials from the Arab League summit pose for a group photo, at a gathering near the Dead Sea in Jordan on Wednesday, March 29, 2017. (AP Photo/ Raad Adayleh)

Israeli Prime Minister Benjamin Netanyahu has not formally abandoned his stated support for the two-state solution, but has stopped mentioning it in his speeches since Trump was elected. Instead, he has made vague statements about seeking a region-wide agreement.

In a speech this week to AIPAC, the pro-Israel American lobby group, Netanyahu once again alluded to a region-wide approach, saying that “common dangers faced by Israel and many of our Arab neighbors now offer a rare opportunity to build bridges toward a better future.” Jordan has a large Palestinian population and also serves as custodian of a major Muslim-run shrine in Jerusalem that is also Judaism’s holiest site.

The Al-Aqsa Mosque compound, known to Jews as the Temple Mount, has been a scene of frequent Israeli-Palestinian tensions, including clashes.

Palestinians fear Israel wants to divide it, a charge Israel denies. Jordan’s monarch said “we will continue to fight any attempts to change the status quo” at the site.

The Al-Aqsa Mosque compound, known to Jews as the former site of both Jewish Temples, has been a scene of frequent Israeli-Palestinian tensions, including clashes.