By Elizabeth Dias and Ruth Graham

A potent mix of grievance and religious fervor has turbocharged the support among Trump loyalists, many of whom describe themselves as participants in a kind of holy war. 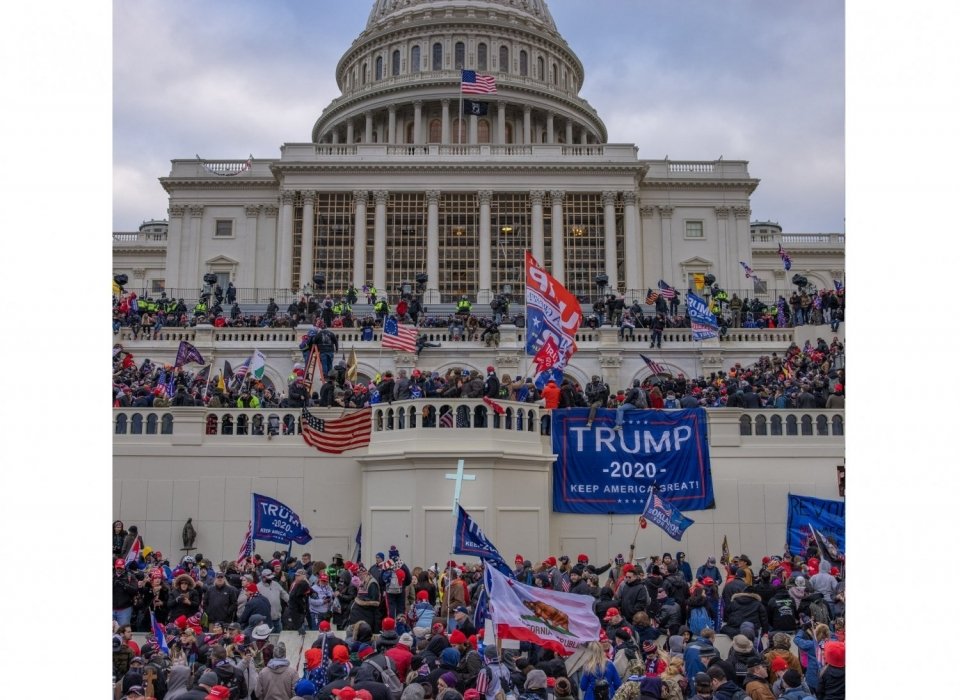 WASHINGTON — Before self-proclaimed members of the far-right group the Proud Boys marched toward the U.S. Capitol on Wednesday, they stopped to kneel in the street and prayed in the name of Jesus.

The group, whose participants have espoused misogynistic and anti-immigrant views, prayed for God to bring “reformation and revival.” They gave thanks for “the wonderful nation we’ve all been blessed to be in.” They asked God for the restoration of their “value systems,” and for the “courage and strength to both represent you and represent our culture well.” And they invoked the divine protection for what was to come.

Then they rose. Their leader declared into a bullhorn that the media must “get the hell out of my way.” And then they moved toward the Capitol.

The presence of Christian rituals, symbols and language was unmistakable on Wednesday in Washington. There was a mock campaign banner, “Jesus 2020,” in blue and red; an “Armor of God” patch on a man’s fatigues; a white cross declaring “Trump won” in all capitals. All of this was interspersed with allusions to QAnon conspiracy theories, Confederate flags and anti-Semitic T-shirts.

The blend of cultural references, and the people who brought them, made clear a phenomenon that has been brewing for years now: that the most extreme corners of support for Mr. Trump have become inextricable from some parts of white evangelical power in America. Rather than completely separate strands of support, these groups have become increasingly blended together.

This potent mix of grievance and religious fervor has turbocharged the support among a wide swath of Trump loyalists, many of whom describe themselves as participants in a kind of holy war, according to interviews. And many, who are swimming in falsehoods about the presidential election and now the riot itself, said the aftermath of Wednesday’s event has only fueled a deeper sense of victimhood and being misunderstood.

Lindsay French, 40, an evangelical Christian from Texas, flew to Washington after she had received what she called a “burning bush” sign from God to participate following her pastor urging congregants to “stop the steal.”

“We are fighting good versus evil, dark versus light,” she said, declaring that she was rising up like Queen Esther, the biblical heroine who saved her people from death.

“We are tired of being made out to be these horrible people,” she said, acknowledging there was some violence but insisting on the falsehood that Antifa was behind it. 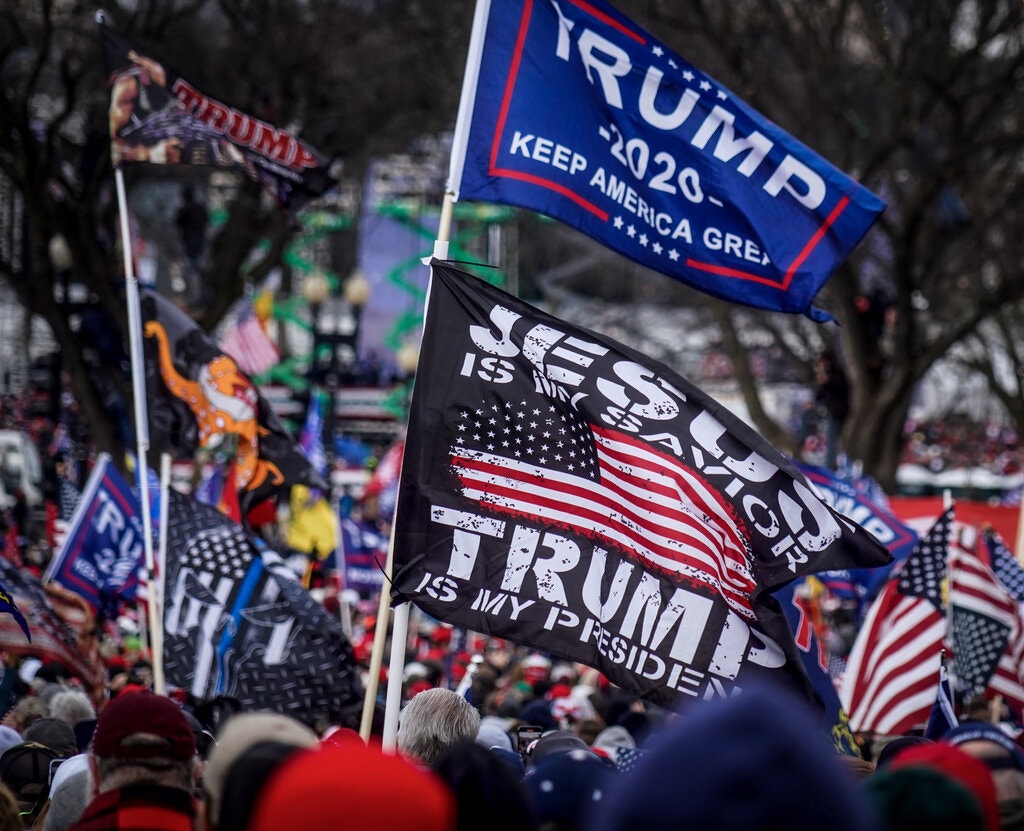 Trump supporters gathered near the Capitol during a “Stop the Steal” rally last week in Washington, D.C.Credit...Selcuk Acar/NurPhoto, via Getty Images 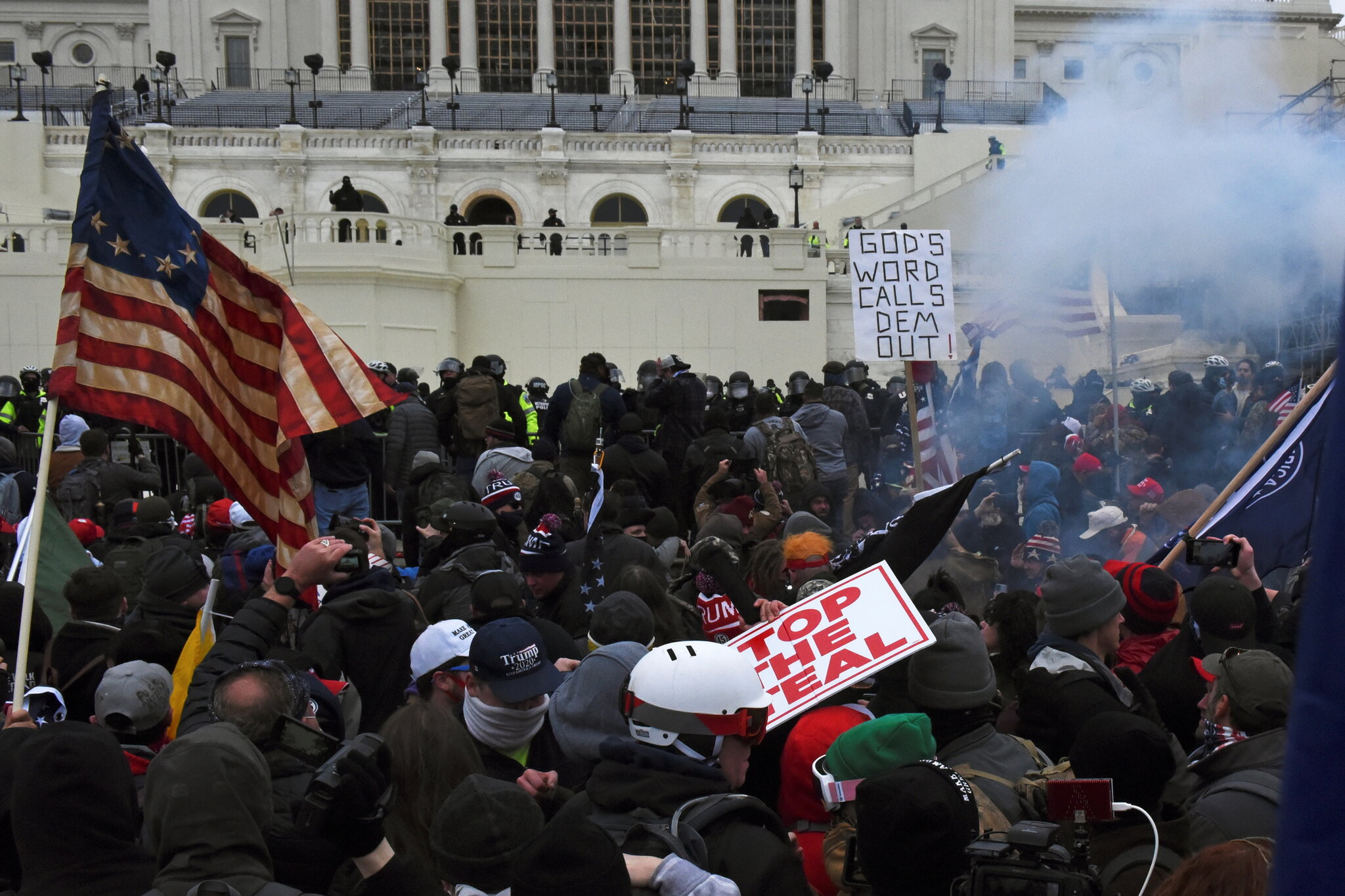 Like many Republicans in Congress, some evangelical leaders who have been most supportive of Mr. Trump distanced themselves and their faith from the rioters. Robert Jeffress, pastor of First Baptist Dallas, called the violence “anarchy.” The siege on the Capitol “has absolutely nothing to do with Christianity,” he said. “Our support of President Trump was based on his policies.”

But critics said it was too late to try to separate the white conservative Christian culture that helped push Mr. Trump to power from last week’s violence in Washington.

“You can’t understand what happened today without wrestling with Christian Nationalism,” Andrew Whitehead, a sociologist at Indiana University-Purdue University Indianapolis, said on Wednesday, adding that white evangelical movements have long at least tolerated far-right extremism, well before Mr. Trump. “They provided the political and theological underpinnings of this, and it has allowed anarchy to reign.”

In a Facebook video shot in Washington on Monday night, Tennessee pastor Greg Locke referred to himself as part of the “black robe regiment,” a reference to American clergy who were active in the American Revolution. At a rally the next night, Mr. Locke preached to a crowd of Trump supporters in Freedom Plaza, predicting “not just a Great Awakening, but the greatest awakening that we have ever seen.”

The riot on Wednesday, carried out by a largely white crowd, also illustrated the racial divide in American Christianity.

Hours before the attack on the Capitol, the Rev. Raphael Warnock of Ebenezer Baptist Church in Atlanta had been elected to the U.S. Senate after many conservative white Christians tried to paint him as a dangerous radical, even as his campaign was rooted in the traditional moral vision of the Black church. And for years many Black Christians have warned white believers that Mr. Trump’s rhetoric on race was going to end badly.

“This is authentic white American Christianity on display,” he said of Wednesday’s event. “The challenge for white Christian America is to examine what they have wrought religiously.”

Inside the Capitol, senators who objected to the election results were among the most prominent conservative Christians in their party, including Senators Ted Cruz, Josh Hawley, and Cindy Hyde-Smith.

The fruits of the alliance between far-right groups — Christian and otherwise — were clear on Wednesday, before the rioting began, as thousands of Trump supporters gathered to protest the certification of the presidential election results, with Joseph R. Biden Jr. definitively defeating Mr. Trump, even after attempts to discredit the election. Many in attendance were white evangelicals who felt called to travel hundreds of miles from home to Washington.

Oren Orr, 31, an arborist from Robbinsville, N.C., where he goes to Santeetlah Baptist Church, rented a car to drive to Washington. He carried his American flag right up below the officers on the bleachers, and his wife had a Christian flag. Mr. Trump could be the last president to believe in Jesus, he said. (Mr. Biden speaks often  about his lifelong Catholic faith, and unlike Mr. Trump, attends church services frequently.)

Mr. Orr said he brought a baton and a Taser to Washington but did not get them out. “I know the Lord has my back no matter what happens,” he said.

As for the ample evidence that many in the crowd were racist, Mr. Orr said, “We get called white supremacists and all this. I have plenty of colored friends. Some of my best friends are from Mexico.”

The spread of falsehoods about the integrity of the election — and now the roots of Wednesday’s rioting — have deeply infiltrated conservative Christian circles. Apocalyptic evangelical beliefs about the end of the world and the coming divine judgment blur with QAnon conspiracy theories that falsely assert the country is dominated by deep-state bureaucrats and pedophiles.

Abigail Spaulding, a stay-at-home mother of 15 who traveled to the rally with friends from her church in South Carolina, broke down in tears as she spoke about her fears for her children under a Biden administration. She said her husband had explained to their children that when Mr. Biden is sworn in as president, “they can take the Bible and call it hate speech and throw it out.” And she had other worries about Mr. Biden, drawn from Facebook and Twitter — all of which were false. 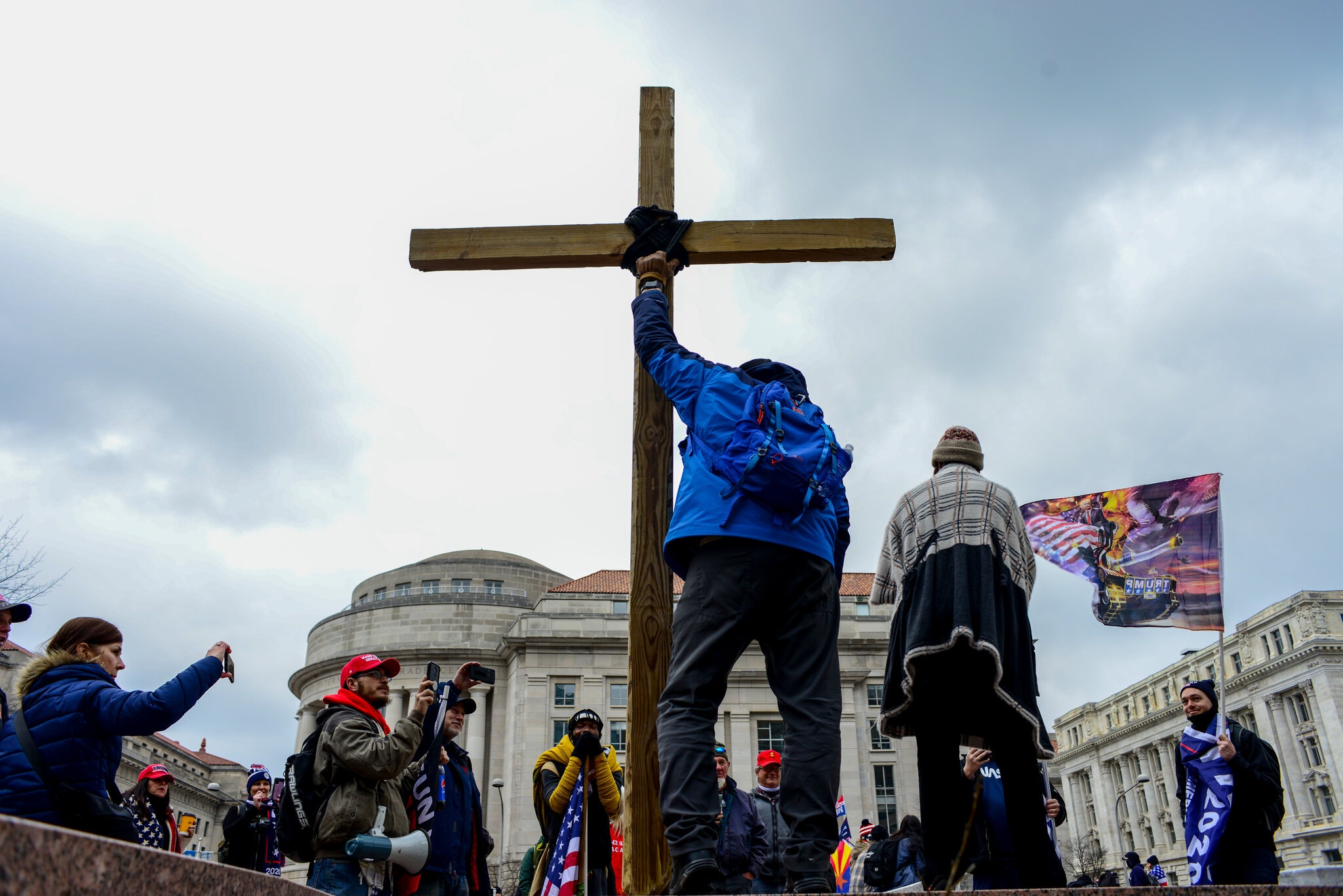 Religion was on the minds of many who gathered in Washington last week to support President Trump.Credit...Kenny Holston for The New York Times

In Kalamazoo, Mich., Laura Kloosterman, 34, attended mass on Wednesday and prayed that Congress would decline to certify Mr. Biden’s victory. She had read claims online about flawed voting machines undercounting votes for Mr. Trump — there is no evidence for these claims, which Mr. Trump and right-wing voices online have promoted.

Ms. Kloosterman follows the evangelical writer and radio host Eric Metaxas, who has repeatedly claimed the election results were fraudulent. Mr. Metaxas, who punched a protester outside the White House last summer, told Mr. Trump in an interview in late November that he would “be happy to die in this fight,” in a conversation about attempts to overturn the election results. “God is with us,” he added.

Other supporters of the president have spent months sowing doubts among Christians about fraud. These false beliefs have forged even stronger connections between white evangelicals and other conservative figures.

A group called the Jericho March, which has led a series of demonstrations for “election integrity,” held five days of events in Washington that culminated on Wednesday. Last month the group, which included speakers like Mr. Metaxas and Michael T. Flynn, Mr. Trump’s former national security adviser, marched around the Capitol seven times, modeling their protest on a biblical battle in which the Israelites marched around the city of Jericho until its walls crumbled, letting their armies take the city.

Earlier this week, when Enrique Tarrio, the leader of the Proud Boys, was arrested in Washington on suspicion of burning a Black Lives Matter banner torn from a historic Black church, his supporters raised more than $100,000 for his legal defense on a Christian fund-raising platform called GiveSendGo.

“Many people disagree with GiveSendGo allowing campaigns for people or causes that they personally disagree with, much like people disagreed with the way Jesus showed love to the ‘sinners of society,’” the platform’s co-founder, Jacob Wells, said. “We choose not to side at all and that causes a lot of both sides to hate us.”

Since the riot, many who were sympathetic to its cause said they were enraged at the removal of Mr. Trump and others from social media platforms like Twitter, and the deplatforming of the upstart conservative social-media site Parler. They viewed it as part of a broader conspiracy to silence Christianity. And they are looking ahead to make sure that their voices are heard.

Adam Phillips, 44, a dry wall contractor from Robbinsville, N.C., had work and couldn’t come to Washington on Wednesday — “The Lord just didn’t see it fit,” he said — but he came to two demonstrations since November, the Stop the Steal march and the Million MAGA March.

“It has been obvious for a while that Christians are under suppression, they are under scrutiny by everyone,” he said. “All of the things the country was founded on are under attack, they are trying to get the name of God out of everything, especially the name of Jesus.”

Ruth Graham is a national correspondent covering religion, faith and values. She previously reported on religion for Slate. @publicroad 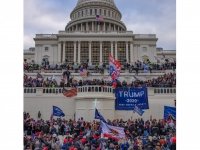