Texas megachurch pastor Robert Jeffress, one of President Trump’s evangelical advisers who preached the morning of his inauguration, has released a statement saying the president has the moral authority to “take out” North Korean leader Kim Jong Un. 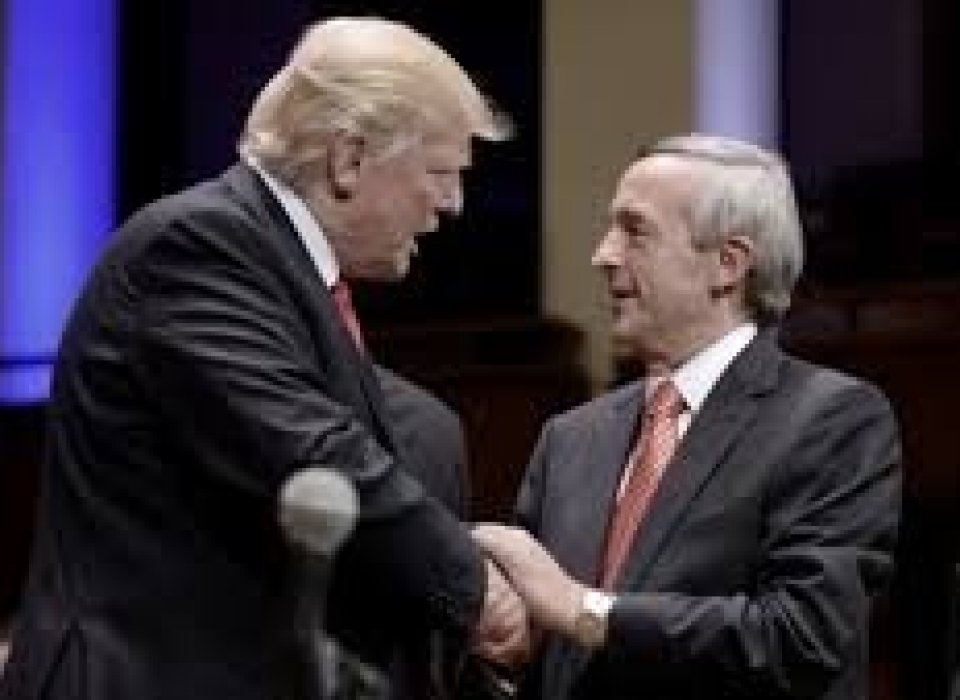 Texas megachurch pastor Robert Jeffress, one of President Trump’s evangelical advisers who preached the morning of his inauguration, has released a statement saying the president has the moral authority to “take out” North Korean leader Kim Jong Un.

“When it comes to how we should deal with evildoers, the Bible, in the book of Romans, is very clear: God has endowed rulers full power to use whatever means necessary — including war — to stop evil,” Jeffress said. “In the case of North Korea, God has given Trump authority to take out Kim Jong Un.”

Jeffress said in a phone interview that he was prompted to make the statement after Trump said that if North Korea’s threats to the United States continue, Pyongyang will be “met with fire and fury like the world has never seen.”

During his stay at his Bedminster, N.J., golf club on Aug. 8, President Trump said North Korea "will be met with fire and fury like the world has never seen" if they continue making nuclear "threats." (Reuters)

He said that many pacifist Christians will cite Romans 12, which says, “Do not repay evil for evil,” but Jeffress says that the passage is referring to Christians, not to the government.

“A Christian writer asked me, ‘Don’t you want the president to embody the Sermonon the Mount?’ ” he said, referring to Jesus’s sermon. “I said absolutely not.”

In his sermon on the morning of Trump’s inauguration in January, Jeffress, senior pastor of First Baptist Dallas, compared Trump to the story of the biblical leader Nehemiah, who helped rebuild the city of Jerusalem.

The first step of rebuilding the nation, Jeffress said, was the building of a wall around Jerusalem to protect its citizens. “You see, God is not against building walls,” Jeffress said in his sermon at St. John’s Episcopal Church in Washington.

[‘God is not against building walls!’ The sermon Trump heard from Robert Jeffress before his inauguration.]

Jeffress is no stranger to controversy. He has said in the past that former president Barack Obama paved the way for the Antichrist and drew wide attention for calling Mormonism a cult during the 2012 Republican primaries. Jeffress knows his comments on North Korea could be considered controversial, even among fellow evangelicals. His megachurch in Dallas is a prominent Southern Baptist church, one where evangelist Billy Graham had membership for many years. In 2016, the church reported an average weekly attendance of about 3,700.

“Some Christians, perhaps younger Christians, have to think this through,” Jeffress said. “It’s antithetical to some of the mushy rhetoric you hear from some circles today. Frankly, it’s because they are not well taught in the scriptures.”

Over the past two years, Jeffress said, Trump has been “very measured, very thoughtful in every response.”

“People instinctively know that this president is not going to draw an imaginary red line and walk around it like President Obama did,” he said.

Attitudes about North Korea among evangelicals are unclear, he said.

An overwhelming number of white, evangelicals voted for Donald Trump, 81-16 percent, according to exit poll results. Facebook Live host Libby Casey talks to religion reporter Sarah Pulliam Bailey about how Trump appealed to this group and what they expect from him once in office. (The Washington Post)

“I think many evangelicals, like most Americans, really don’t pay attention to global affairs,” Jeffress said. “I believe we’re all going to be forced to soon if North Korea isn’t dealt with decisively.”

Jeffress is unusual for an evangelical pastor because most pastors do not speak about specific foreign policy issues from the pulpit, except sometimes about Israel, said Amy Black, a political-science professor at Wheaton College, an evangelical institution in Illinois.

Theologians and church leaders have debated the interpretation of Romans 13 for millennia, Black said. Most mainstream interpretations of the passage, she said, would suggest that God works through governmental leaders, but ultimate authority comes from God. Debate broke out among Christians in Germany during World War II over how to interpret this passage; some Christians believed they should follow the government while others set up a resistance movement.

“If anything, Romans 13 creates a conundrum, because it could be interpreted that Kim Jong Un has authority to govern,” she said.

Jeffress last met with Trump in July when a group of pastors laid hands on the president in the Oval Office. He said now that health care is off the table, evangelicals are hoping for tax reform, though he didn’t have any specifics in mind.

The access Jeffress has to the White House, Black said, may explain why many evangelicals have been so attracted to Trump.

“Some of the approval of Trump is less about the specific person and even specific policy, but it’s about someone who is listening to us,” she said. “Jeffress is a piece of that story of having access.”

Black says that Jeffress represents an “old guard” of evangelicals, closely aligned to leaders like popular radio personality and psychologist James Dobson and Pat Robertson, who founded the Christian Broadcasting Network. Many evangelicals now look to leadership from pastors like Rick Warren in California or Tim Keller in New York City, though Warren and Keller do not speak about politics very often.

“We’re in a weird vacuum; we’re past the Jim Dobson and Pat Robertson era, but it’s not 100 percent clear who will fill their place,” Black said.

Jeffress, who was an early supporter of Trump, has said that after sharing Wendy’s cheeseburgers in Iowa, he believed Trump would be the next president and that it would be because God placed him there. In July, his church choir and orchestra performed a song called “Make America Great Again” at the John F. Kennedy Center for the Performing Arts in D.C., where Trump was in attendance.

This story has been updated to provide further comments from Amy Black, a political-science professor at Wheaton College. A look at the second half, so far, of the president’s first year in the White House. 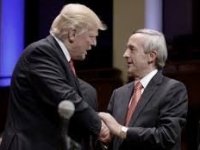