BRANDON, Fla. — Three years ago, Rickey Halbert was torn about whether to vote for Donald Trump.

On the one hand, he’d read about Trump’s extramarital affairs and the women who alleged he had sexually assaulted them. Halbert, a Defense Department employee, didn’t think the candidate matched his moral compass. 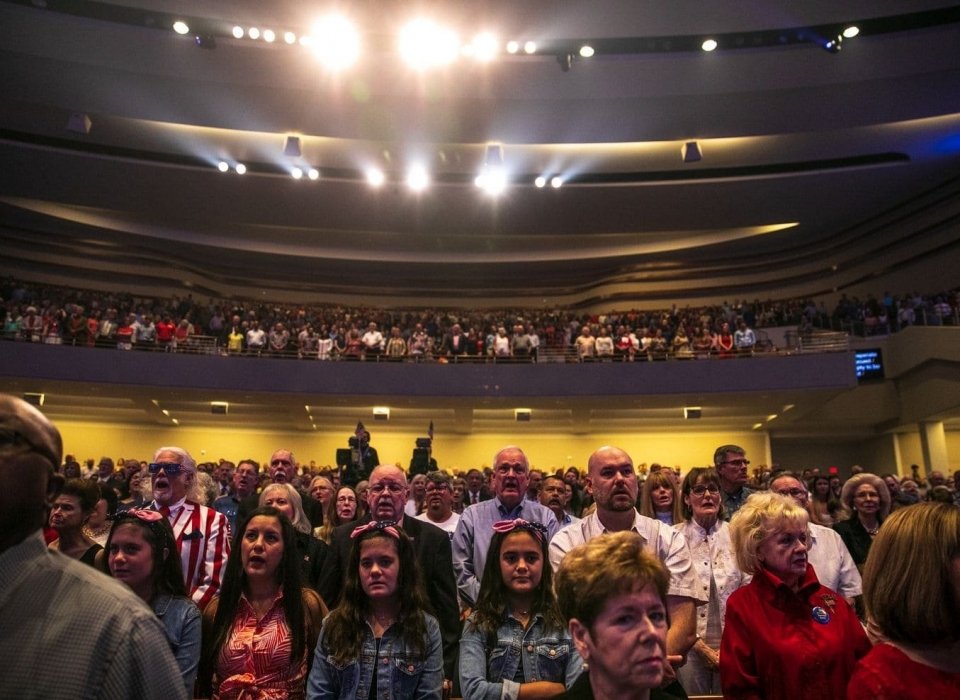 Then again, he believed Trump would reduce the number of abortions in the country.

In the end, he said, that convinced him to vote for Trump, like most of his fellow evangelicals.

In the years since, he’s watched as the president restricted abortion access, rolled back gay rights and tried to reduce both legal and illegal immigration. He’s listened as Trump has made racist statements and been accused of rape.

He has reached the same conclusion as so many evangelicals across the country: In 2020, he’ll support the president. This time, it won’t be a hard choice.

Interviews with 50 evangelical Christians in three battleground states — Florida, Pennsylvania and Wisconsin — help explain why. In conversation, evangelical voters paint the portrait of the Trump they see: a president who acts like a bully but is fighting for them. A president who sees America like they do, a menacing place where white Christians feel mocked and threatened for their beliefs. A president who’s against abortion and gay rights and who has the economy humming to boot.

“You’ve just got to accept the bad with the good,” Halbert said. Evangelical Christians are separated from other Protestants (called mainline Protestants) by their belief in the literal truth of the Bible as well as their conservative politics on gender roles, sexuality, abortion and other subjects.

For many, the eight years of the Obama administration felt like a nightmare. The indelible image for the Rev. Chris Gillott was the night the Supreme Court ruled gay marriage legal across the land and Obama flooded the White House in rainbow lights.

“I didn’t see it lit up in a rainbow this June,” the youth pastor at Christian Life Center in Bensalem, Pa., notes, with a hint of satisfaction.

Gillott perceived, during the Obama administration, a newly hostile attitude toward Christians in America that left him worried his country was changing irrevocably. “If you think marriage is between one man and one woman, you’re a bigot and we don’t need you in this country,” he summarized what he saw as the thinking of Democrats. “There is animus being attributed to Christian core beliefs. And where that’s coming from is the left.”

Trump looked to many like a protector, a brash culture warrior who would take their side. “He said, ‘I’m gonna fight for you. I’m gonna defend you,’ ” said Ralph Reed, the chair of the Faith and Freedom Coalition in Georgia, which will distribute millions of voter-guide pamphlets at churches to drive evangelical turnout in 2020. “He gets it. He knows they’re hungry for that.”

Reed, and others, don’t necessarily expect Trump to fix the problems they see. On gay rights in particular — by far the most drastic change in American attitudes in this century — evangelicals fought hard to block marriage equality. But now, many believe that ship has sailed.

While they cheer Trump’s many efforts to chip away at LGBT rights, they are much more concerned with protecting their own right to maintain their opposition.

They want to be able to teach their values without interference — some churchgoers fretted about school textbooks that refer to transgender identities without condemnation and about gay couples showing up in TV commercials every time they try to watch a show with their children.

A girl holds a flag during a service at First Baptist Dallas church in Dallas in June. (Ilana Panich-Linsman/For The Washington Post)

They want the right to choose how they run their businesses. Members of large churches across the country can rattle off the details of the court cases involving Christian business owners who refused to participate in gay weddings and the bill that Democrats in Congress want to pass to compel service for all customers.

For many, abortion was the defining issue of the last election. In Appleton, Wis., the Rev. A.J. Dudek sat with several leaders of men’s Bible study groups recently in his megachurch’s huge curving lobby.

“Do I enjoy his tweets? No,” Dudek said about the president. But he believes the agenda far outweighs that concern. “If Donald Trump will help save a couple million babies, that’s a good thing. My vote has to align with my view of God’s word — I should care for the baby in the womb.”

It’s a calculation that evangelicals frequently described making when they considered their options in the 2016 election.

But now, many are genuinely delighted by the Trump they’ve seen in office.

The economy is roaring. Trump makes mention of God at rallies and pays lip service to evangelicals. They praise his honesty, focusing not on falsehoods spoken but on his attempts to do all the things he said he would do in office.

“He’s forthright and honest — at his rallies, he talks about God,” said Joey Rogers, who wore a Trump hat while shopping at a gun show in Bradenton, Fla., last month. Rogers, a member of an evangelical church near Tampa, has attended televangelist Paula White’s church in Georgia a few times and said her affiliation with Trump reassures him that the president is a praying man.

Democrats think Christians are “wacky,” he said. He also bemoaned a degradation of American life brought on, Rogers said, by half a century of removing prayer from public schools and Bible verses from federal courthouses.

“All of our laws are based on the Ten Commandments,” he said. “I think that’s why the country is losing the values that we once had.”

During a Sunday in July when Trump spent the morning tweeting that four congresswomen of color — three of whom were born in the United States — should “go back” to the countries “from which they came,” many white evangelicals attending church in Florida said immigration is their top priority. They almost unanimously approved of Trump’s handling of the border.

“If you are coming to America and you are in one of our facilities being held, that’s on you,” said Andrea Owen, a retired police officer who spends most days babysitting her autistic great-nephew. “I’m not trying to be hateful because we’re all God’s people. But do it legally. . . . The places they’re housing them? Honestly, if they’re so uncomfortable, they shouldn’t have come here.” Attendees pray during a Women For Trump campaign rally for President Trump in King of Prussia, Pa., on July 16. (Matt Rourke/AP)

Some evangelicals, like Julian Ketchum at Hope Community Church in King of Prussia, Pa., label themselves “values voters.” What they mean by values: abortion and gay rights, not traits like integrity and kindness. “There’s no way I can know those” attributes of a person’s character, Ketchum said, though he then said he picked Trump over Clinton in part because he found her dishonest.

And the allegations that Trump sexually assaulted numerous women are not a moral concern, many Christians say.

“I don’t see him as a rapist,” said Cheryl Gough, a preschool teacher at Bay Life Church in Brandon, Fla. “He can be not the nicest person, but I don’t see — I’m not calling her a liar. There’s just been too many allegations. Now you’re coming to the public about it?”

Evangelical views on gender roles also tend to put them at odds with the American mainstream: Most believe the Bible teaches that women ought to be submissive to men, who are in charge within the family.

Reed, who predicts Trump will capture as large a share of the evangelical vote in 2020 or even larger than in 2016, said a Democratic opponent who tries to chastise Trump for sexual harassment will only turn off these voters.

The accusations of Trump’s shortcomings just keep coming. Opponents decry his attitude toward people of color, his approach to immigrants detained at the border, his answers to violence in American cities, and on and on.

But in Appleton, the Rev. Dennis Episcopo hasn’t felt the need as a religious leader to denounce any of it in front of his congregation, which includes more than 5,000 attendees on a typical Sunday. The megachurch that he has led for 22 years is almost entirely white and conservative, like the lakeside region where it is located.

Episcopo has not seen any behavior from Trump in the past three years that would prompt him to openly dissuade churchgoers from supporting this president.

“There could be something, where society really crosses the line on something, that I feel as a pastor I have to get up and say something,” he muses. “But it hasn’t happened yet.”

Julie Zauzmer is a religion reporter. She previously covered local news at The Washington Post and at the Philadelphia Inquirer. Follow