Editorial // From Balfour to Two States

No event the PM holds with his British counterpart will bring the Palestinians to accept Israeli rule, and no Palestinian protest will lead to mass Jewish emigration from Israel 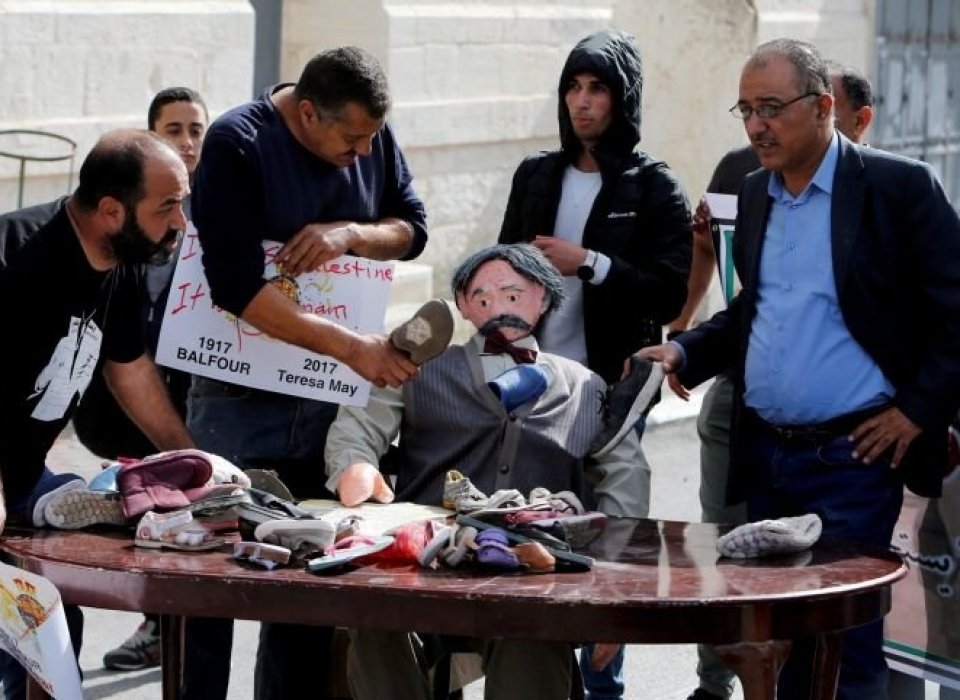 Palestinians use shoes to hit an effigy depicting Arthur Balfour during a protest in the West Bank city of Bethlehem November 1, 2017. MUSSA ISSA QAWASMA/REUTERS

The Balfour Declaration’s 68 words constituted the foundations of the international legitimacy for the “national home” that evolved into the State of Israel.

In the aftermath of World War I, and thanks to the political resourcefulness of Chaim Weizmann, the Zionist movement won Britain’s support for the national aspirations outlined by Theodor Herzl. The British takeover of the land of Israel a few weeks later provided the political declaration with practical force and paved the way for the immigration of hundreds of thousands of Jews to Mandatory Palestine, the establishment of institutions for the pre-state Jewish community and, 30 years later, independence.

But the Balfour Declaration also sowed the seeds of the Israeli-Palestinian conflict. This, because the British denied the Arabs — who constituted 90 percent of the population of Palestine — the right to self-determination that they gave to Jews from all over the world and Arabs in certain neighboring states. The pro-Zionist British position was confirmed in the mandate authorized by the League of Nations, but the controversy raised by the Balfour Declaration stands to this day, 100 years since it was issued.

Prime Minister Benjamin Netanyahu sees the Balfour Declaration as justifying his view that only Jews have historic and national rights in Israel. That is why he devoted the past week to celebrations of the centenary of the declaration and the British conquest, which he described as “liberating” the land from Turkish rule. In contrast, Palestinian President Mahmoud Abbas called on today’s British government to renounce the Balfour Declaration, as a colonialist license to negate the Palestinians’ rights and misappropriate their land.

There are justifications to both sides’ positions, but instead of leaving the debate to historians, Netanyahu and Abbas insist on inflaming the argument and sending to their respective peoples that there is no hope for a solution to the conflict. Netanyahu tells the Palestinians to give up on their national aspirations; Abbas tells the Jews their presence in the region is immoral, because most of them arrived on the bayonets of imperialism.

The leaders’ supreme responsibility is to see to the future, not to keep obsessing futilely over the past. Instead of arguing about a 100-year-old document and using it as an excuse to dismiss each other’s demands, Netanyahu and Abbas should work on implementing the two-state vision – Israel and Palestine – in which both sides’ national aspirations would be realized.

No event the prime minister holds with his British counterpart Theresa May will bring the Palestinians to accept the Israeli yoke forever, and no Palestinian protest will lead to mass Jewish emigration from Israel and the voluntary disintegration of the state.

Instead of seeing the Balfour Declaration’s centenary as a fitting occasion to find a fair compromise, Netanyahu and Abbas have wasted it on a fruitless war of words.

The above article is Haaretz's lead editorial, as published in the Hebrew and English newspapers in Israel. 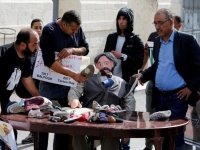