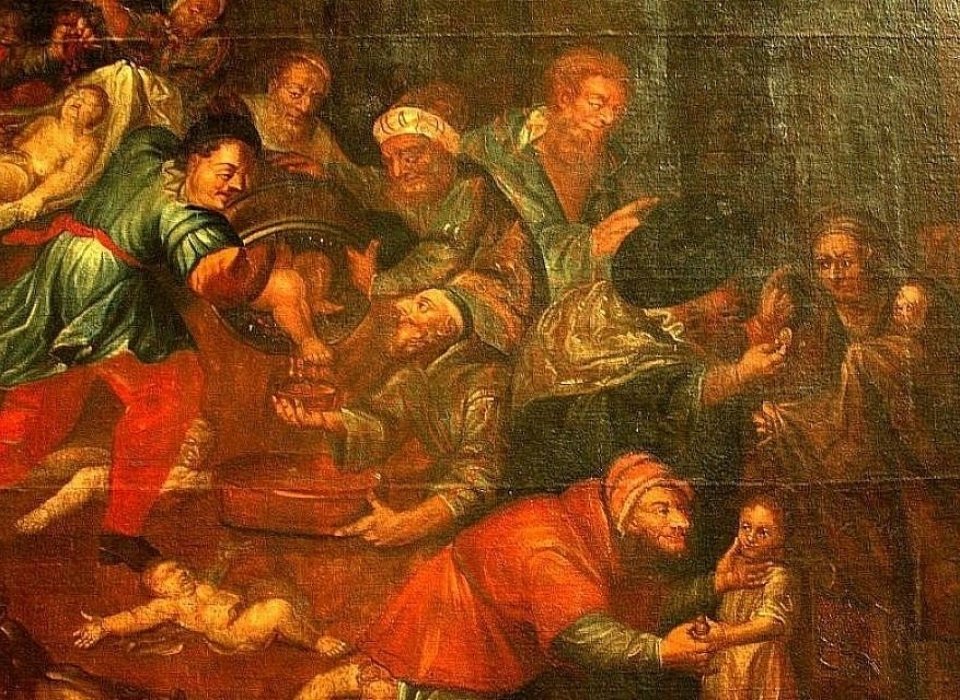 LONDON — The Church of England admitted Thursday that centuries of Christian anti-Semitism helped lead to the Holocaust.

In a major report that was three years in the making, England’s established church cited “the attribution of collective guilt to the Jewish people for the death of Christ and the consequent interpretation of their suffering as collective punishment sent by God” as being among the ideas that “contributed to fostering the passive acquiescence if not positive support of many Christians in actions that led to the Holocaust.”

The report, “God’s Unfailing Word: Theological and Practical Perspectives on Christian–Jewish Relations,” also urged Christians to accept the importance of Zionism for most Jews.

In an oblique swipe at opposition leader Jeremy Corbyn, it warned that “some of the approaches and language used by pro-Palestinian advocates are indeed reminiscent of what could be called traditional antisemitism.”

The Church of England stands at the center of the Anglican Communion, a worldwide network of churches. In England, it is the state church and headed by Queen Elizabeth II.

In an afterword to “God’s Unfailing Word,” the UK’s chief rabbi takes the church to task for failing to reject outright the work of evangelical Christians who attempt to convert Jews.

Ephraim Mirvis praises the 105-page report for being “sensitive and unequivocal in owning the legacy of Christianity’s role in the bitter saga of Jewish persecution.” 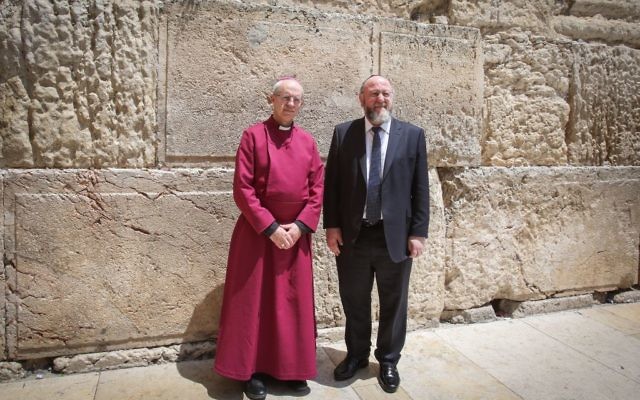 Mirvis goes on, though, to express his “substantial misgiving” at its unwillingness to condemn the “efforts of those Christians, however many they may number, who, as part of their faithful mission, dedicate themselves to the purposeful and specific targeting of Jews for conversion to Christianity.”

Mirvis notes that a 2015 statement by the Vatican pledged the Catholic Church to “neither conduct nor support any specific institutional mission work directed towards Jews.” The Church of England document, by contrast, makes no such blanket commitment, instead urging Christians to “think carefully about mission and evangelism in the case of their Jewish neighbors.”

The chief rabbi warns of a “real and persistent concern, set in a tragic historical context, that even now, in the twenty-first Century, Jews are seen by some as quarry to be pursued and converted.”

"Even now, in the twenty-first Century, Jews are seen by some as quarry to be pursued and converted"

“The enduring existence within the Anglican Church of a theological approach that is permissive of this behaviour does considerable damage to the relationship between our faith traditions, and, consequently, pursuing a comprehensive new Christian–Jewish paradigm in this context is exceptionally challenging,” Mirvis continues.

In a foreword to the report, the Church of England’s leading cleric, the Archbishop of Canterbury, Justin Welby, responds to the chief rabbi’s criticism.

“His words are written as a friend, and they are received in a similar spirit, however tough they are to read,” Welby writes.

“The Chief Rabbi has opened, with characteristic honesty and affection, a challenge upon which we must reflect,” he writes. “We cannot do that reflection honestly until we have felt the cruelty of our history.”

The document is unflinching in its acceptance of the historic role of Christianity in perpetuating anti-Semitism. “Recognition on the part of the Church that it bears a considerable measure of responsibility for the spread of antisemitism demands a response from the Church,” it argues. 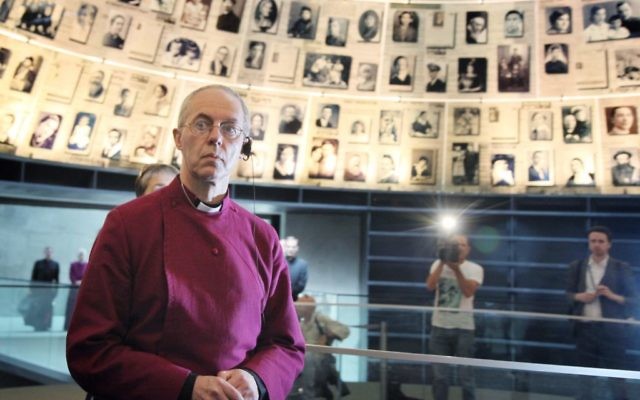 Current Archbishop of Canterbury and senior bishop in the Church of England Justin Welby looks up and around at photographs of individual victims of the Holocaust in the Hall of Names at the Yad Vashem Holocaust Memorial museum in Jerusalem. June 27, 2013. (Isaac Harari/FLASH90)

The report goes on to call for “attention to the persecution and prejudice experienced by Jewish people through history” and “the responsibility held by Christians for that and its persistence in the contemporary context.” Christian teaching, it admits, has provided a “fertile seed-bed for murderous antisemitism in the modern era.”

Quoting Welby’s words in 2016 that the theological teachings of the Church have “compounded the spread of the virus” of anti-Semitism,” the report says “the attribution of collective guilt to the Jewish people for the death of Christ and the consequent interpretation of their suffering as collective punishment sent by God is one very clear example of that.”

“Within living memory, such ideas contributed to fostering the passive acquiescence if not positive support of many Christians in actions that led to the Holocaust,” it adds.

In a stark passage, Welby recalls a visit to Birkenau with Christian leaders in 2016: “The bitter cold and the colourless outline of the landscape reflected the horror in our spirits, minds and hearts, that this had taken place and Christians had done much of it.” 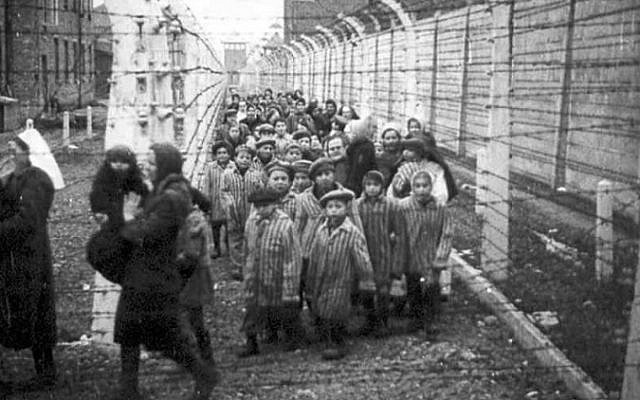 Liberation of children from Auschwitz-Birkenau. (HistClo.com)

Although it argues that “some would find the seeds of Christian antisemitism within the New Testament itself,” the report draws special attention to the historic role of Christianity in England.

“England had its own role in this history, with a claim to being the birthplace of what became known as the ‘blood libel,’ whereby Jews were falsely accused of murdering Christian children to make Passover matzot with their blood,” it says.

Two English cathedrals, Norwich and Lincoln, were associated with the development and spread of the blood libel in the Middle Ages.

Its first recorded instance was when a 12-year-old boy was found murdered outside of the East Anglian city of Norwich in 1144. Members of his family accused the Jews of Norwich of killing him.

The report notes that “this allegation, originating in England, became the catalyst for the murder of many Jews in this country and across Europe, especially in pogroms at Eastertide.”

In 1290, it also goes on to acknowledge, England “became the first country to order the entire Jewish community to leave, thereby seeking to be a Christian territory with no Jewish presence.” 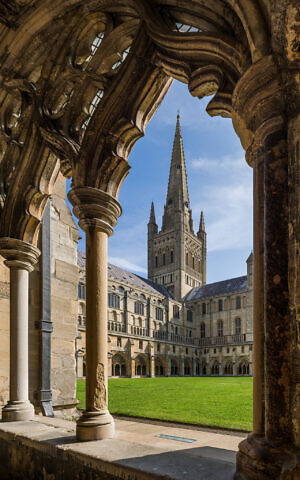 Beyond the UK, the report acknowledges the dark history of the Jewish experience in Europe.

“The centuries of Christian government in European history include a long catalogue of anti-Jewish measures, such as legal discrimination and periodic expulsion, alongside bouts of communal violence leading in some cases to the massacre of entire communities,” it says.

The report adds: “Popular belief was widespread that the miserable state of the Jews, condemned to homelessness, was God’s punishment for their intransigence, rejection of Christ and responsibility for his death.”

As well as facing up to the “sins of the past,” the report urges that the Church should spearhead the fight against anti-Semitism. “Christians have been guilty of promoting and fostering negative stereotypes of Jewish people that have contributed to grave suffering and injustice. They therefore have a duty to be alert to the continuation of such stereotyping and to resist it,” it says.

In his introduction, Welby adds that “too often in history the Church has been responsible for and colluded in antisemitism – and the fact that antisemitic language and attacks are on the rise across the UK and Europe means we cannot be complacent.”

The report was published as Britain prepares to go to the polls in three weeks in a general election which has seen continuing controversy over anti-Semitism in the opposition Labour party. Although the launch date was reportedly chosen before the election was called last month, some commentators have noted that it could have been postponed until after the campaign.

The report does not address the issue directly, but instead suggests that “recent events in the UK context have highlighted the capacity of antisemitism to find purchase across the political spectrum, on the left as well as on the right.” 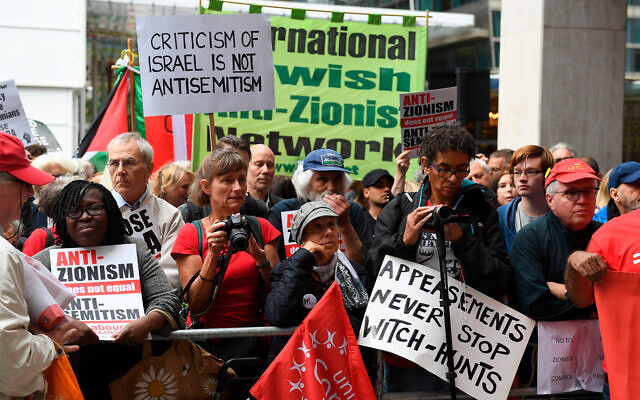 Illustrative: Anti-Israel activists react outside a meeting of the Labour National Executive Committee in London, September 4, 2018. (Stefan Rousseau/PA via AP)

“Some of the approaches and language used by pro-Palestinian advocates are indeed reminiscent of what could be called traditional antisemitism, including its Christian forms, and Christians need to be aware of how this can increase tensions between Jews and Christians in Britain,” the report notes. Corbyn, a longstanding supporter of pro-Palestinian campaigns, has elsewhere been accused of a seeming willingness to associate with alleged anti-Semites, terrorists and Holocaust deniers.

The report goes on to recognize the “deep and far-reaching relationship between Jewish people and both the land and the State of Israel.”

While acknowledging that the International Holocaust Remembrance Alliance definition of anti-Semitism says criticism of Israel similar to that leveled against any other country cannot be regarded as anti-Semitic, the report warns that “the political impetus in the British contexts to protest against perceived injustice by Israel has… in many instances disregarded the fear and distress involved for Jewish people here, especially for young Jews at university in the United Kingdom.”

On the conflict between Israel and the Palestinians, the report attempts to adopt a balanced approach. 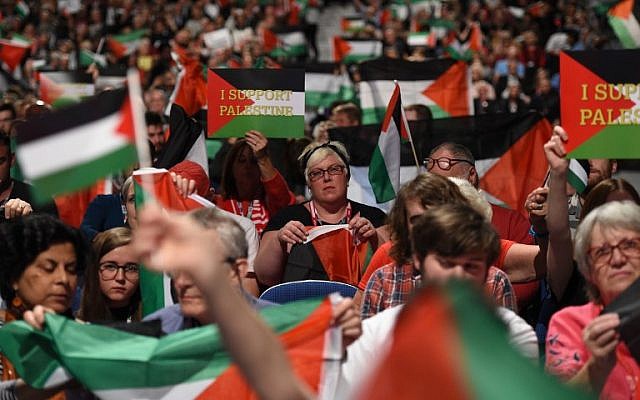 Illustrative: Delegates hold up Palestinian flags during a debate on the third day of the Labour party conference in Liverpool, northwest England on September 25, 2018. (AFP PHOTO / Oli SCARFF)

“While Christians will take different approaches to a number of contemporary questions regarding the State of Israel,” it states, “all should accept that (a) most Jews consider Zionism an important and legitimate aspect of Jewish identity, (b) the State of Israel has a right to a secure existence within recognized and secure borders according to the common principles of international law, (c) the principles of international law also guarantee the rights and security of the Palestinian people, (d) the current apparent impasse presents grave moral difficulties and is ultimately untenable.”

The report also calls for an end to the use in worship of hymns and liturgical works which might “convey the teaching of contempt” towards Jews.

“To what extent does teaching and practice that passes on Christian faith – from sermons and church-based education to hymnody and iconography – also pass on, however inadvertently, an anti-Judaism that is used to provide a rationale for antisemitism,” it asks.

The report calls for “accurate and truthful handling of Scripture” but says there needs to be “sensitive attention to liturgical prayers and hymns in Christian worship and teaching.”

It cites as an example a well-known hymn by Charles Wesley, one of the founders of the protestant Methodist Church, which includes the passage:

“It is possible to read lines 3–6 and imagine they are about the Jewish people as collectively guilty of crucifying the Messiah, who when he comes again in power and glory recognize – too late? – the terrible crime they have committed,” the report suggests.

“Understood in that way, they convey the ‘teaching of contempt’ which the Church of England now rejects,” it warns. 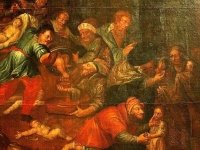