Analysis | 'When I Take Off My Israeli Army Uniform, I'm Just Another Bedouin'

Despite recent Israeli steps such as recognizing Bedouin towns and providing new employment opportunities, the crime, violence and estrangement from the state remains what some call 'a national strategic problem' 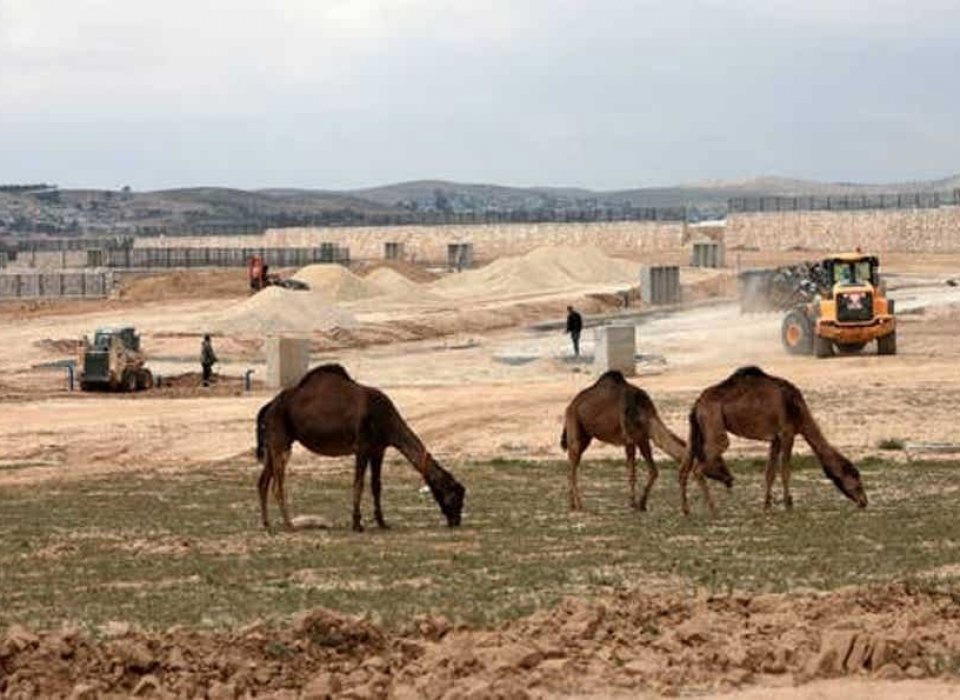 A visit to the Negev these days arouses mixed feelings. On the one hand, on Wednesday the cabinet approved the rare decision to establish three new Bedouin towns, the process of transferring Israel Defense Forces bases southward is gathering steam and the defense establishment is scattering promises about increasing the possibilities for employment. On the other hand, until the effects of the fundamental change in Israel’s national priorities is fully felt, many years will most certainly have elapsed. The current reality is bleak: atrocious poverty in some of the communities, huge gaps between Jews and Arabs, fear of traveling the roads at night on both sides, rampant crime and an increasingly difficult problem of governability that is just a symptom of greater distress.

Defense Minister Benny Gantz visited the Negev on Tuesday, just prior to the start of the national budget deliberations in the Knesset, with the clear intention of radiating hope and optimism in the context of the extensive moves by the new government. Gantz laid the cornerstone for a new Elbit Systems defense electronic plant at Ramat Beqa, an industrial zone south of Be’er Sheva, where the IMI Systems activity relocated from Ramat Hasharon will be transferred. This move is expected to create 5,000 new jobs in the Negev within a few years. However, the picture that was presented to the defense minister, in meetings with representatives of the IDF and the police and subsequently with the Negev municipal council heads, was far bleaker. The visit, exceptionally for Gantz, dealt only with domestic issues. The Gaza Strip had to wait for next time.

And yet, it is difficult to separate the two issues. As Gantz said to one of the Bedouin council heads, the state had barely paid any attention to the increasing violence until it began to affect Jews directly. In the Negev, the watershed was crossed in the first three days of Operation Guardian of the Walls in Gaza in mid-May, when Bedouin blocked main roads for hours and attacked Jewish drivers. Only then did the government wake up.

In a discussion at Central Command headquarters, a reality was described that is spread widely. The gravity of the crime is seen not only in drug-smuggling across the borders with Egypt and Jordan (with work-migrants from Turkey also crossing in from Jordan) or the hundreds of hothouses for growing drugs that are springing up in IDF firing zones. It is spilling over into harassment on the roads, break-ins at army bases and thefts of weapons.

This connects to a process commonly called the “Palestinization” of the Bedouin – the increasing influence of the relations with residents of the West Bank and Gaza. Polygamous marriages to women from Gaza and the southern Hebron Hills are bringing about widespread immigration, with and without permits, while exploiting the wide-open seam line between the territories and Israel in the southern West Bank. The absence of a continuous fence and sufficient patrolling on the Jordanian border and along the seam line also serve the smuggling of weapons. Some of it is flowing from Jordan into the West Bank and from there into the Negev, and to criminals in the Arab Triangle and the Galilee.

The members of the “B generation,” as the police call them, the young people who were born in the Negev to Palestinian mothers, have only very loose ties to the State of Israel. The lack of governability is explained as the tip of the iceberg of something deeper – the lack of identification with the state, which is also apparent among youngsters whose parents were both born in the Negev. This is accompanied by severe unemployment, weak local government in the Bedouin locales, a decline in parental influence and the waning of the traditional leadership of the sheikhs.

The numbers and assessments that were presented to Gantz complete the picture: 300,000 Bedouin in the Negev, a natural rate of increase of 4 percent annually, an average of eight children per family with about half the children born to mothers from the territories. About 40,000 Bedouin are from the B generation. There is a widespread trend of dropping out of school at about age 13. Illiteracy is still common. Most of the young men under 30 who dropped out of school are unemployed. Police estimate that many of them are earning a living through criminal activity.

The participants in the discussion talked about “a strategic national problem” and warned that this has “blown up on us in crazy numbers.” The army has recently tightened security at its bases in the south (the most recent break-in came at the end of February), destroyed, together with the police, hundreds of drug greenhouses, is setting up surveillance systems along the borders and tightening coordination with the armies of neighboring countries to wipe out smuggling. In recent months there has been a decline in the number of recorded incidents of cross-border smuggling, particularly in “violent smuggling” incidents in which the smugglers shoot at the police on the Egyptian side of the border to deter them from intervening. Police have committed to increasing the number of personnel deployed throughout the Negev during this coming year.

The complaints about the missing link in the chain were directed, and not for the first time, at the element that was unrepresented in the discussion – the justice system. The State Prosecutor’s Office and the courts are still not treating crime in the Negev as a problem of national security that requires tougher punishment. The defense establishment representatives mentioned a number of possible solutions that are not within their area of responsibility: establishment of a ministerial committee on the Negev, creation of jobs for Bedouin women, progress on the issues of property rights to land and establishment of “towns of all sorts.”

From the Southern Command, Gantz accompanied, by his deputy Alon Schuster, proceeded to a meeting with the council heads. Some of the participants radiated optimism. Look, now a budget has been approved after the three years of stagnation imposed by Netanyahu’s legal troubles. Salma al-Atrash, head of the Bedouin council al-Qasum, put things into proper proportion: Even a massive budget increase for the Arab public, he said, is far from filling the most minimal needs.

“In my view there is no reason for celebration,” he said. “The plan will not succeed in closing the gaps. People here want to integrate. I don’t know a single Bedouin parent who wants his son to become a criminal. Education is the key. The state comptroller is talking about a 33 percent school dropout rate in the Arab sector. In my estimation, the real number is close to 50 percent. Our students spend thousands of hours in the schools studying Hebrew and emerge from them not being able to conduct the most basic conversation in Hebrew. There are still more than 400 classrooms in the Negev located in mobile pre-fabs. I myself attended school in such a classroom during the 1970s and my daughters are going to school the same way now, and I expect that my grandchildren will do the same too. I served in the army, and I was a good officer, but when I took off my uniform, from your perspective I went back to being a Bedouin.”