An Evangelical Understanding of Jews and Judaism

I’m grateful to Jay Phelan, former president of North Park Theological Seminary, for taking the time to answer a few questions about his new book, Separated Siblings: An Evangelical Understanding of Jews and Judaism (Eerdmans).

Jay, how does an evangelical theologian and former seminary president end up writing a book about Judaism?

More than fifteen years ago a Jewish Rabbi named Yehiel Poupko paid a visit to my office on behalf of the Jewish Federation of Chicago. I had long been interested in the history of Judaism and in Jewish Christian Dialogue, but my friendship with Yehiel became something quite special. For over a decade we studied the New Testament together—reading through Romans and 1 Corinthians.  Through Yehiel I became involved in Evangelical/Jewish dialogue and met many of the outstanding leaders in the Jewish community within the United States and Israel.

At the same time as a teacher I realized how few of my students and people in Christian congregations really understood the nature and history of Judaism. As I have often said, if people knew anything about Judaism it was what they learned in Sunday School growing up—much of it wrong! And what they knew of Jewish history dropped off after the destruction of the temple in 70 CE and picked up with the Shoah/Holocaust and the foundation of the state of Israel. I thought there was an opportunity for a book on Judaism written by a Christian to briefly introduce Jewish thought, practice, and history.

Rabbi Poupko is deeply learned in the Jewish texts—in Mishnah, Talmud, Midrash, and the great medieval Jewish philosophical texts. While reading the gospels or Paul he would make connections with that vast literature I would never be able to make. He would also raise questions that a Christian would be unlikely to raise. Like many Jews he had no compunction about challenging and disagreeing with Paul! Even if we Christians disagree with Paul, we are likely to pretend that we don’t! Studying with Yehiel was also an exercise in what scholars call “intertextuality”—seeing how the Torah, early Jewish literature, and the New Testament interpenetrated each other and interpreted each other.

The Talmud and other Jewish literature are full of disagreements. The Rabbis disagreed and argued vociferously about Halakah, Jewish law and practice. The literature did not obscure those disagreements but preserved them. Even the teachings of their greatest “heretics” are respectfully preserved. When I asked Yehiel why these alternative readings were preserved he shrugged and said, well, we may need them sometime.  When students learn Torah they are assigned a study partner that they essentially argue with. This is how learning is honed.

Tragically, Christians have not preserved their heretics but burned them or thrown them out. Paul says we have been given a ministry of reconciliation but given that we seem incapable of getting along with each other, how will we be agents of reconciliation in the world? By keeping the voices of difference they allowed the community not to live in agreement, certainly, but to survive.

As you said above, most Christians have only a fragmentary understanding of Jewish history, one that stops in the 1st century CE and only picks up again with the mid-20th. Tell us about one particularly important event or individual from that 1800+ year interval in Jewish history.

There are so many, but I will cite one person and one event. The person is Maimonides, the great Jewish philosopher and physician who flourished in the 12th century. He was a remarkable thinker and leader whose work was read avidly by Christians as well as Jews. There is so much to say about him that I will recommend your readers look at my book for more information! Secondly, the unbearable tragedy of Spain’s Jews who were persecuted, martyred, forced to convert and finally driven out in 1492. This is a tragedy that echoes to this very day.

In 2020 — 75 years after the liberation of Auschwitz and other extermination and concentration camps in Nazi Europe — how significant a problem is Christian antisemitism? How do anti-Jewish readings of Scripture persist among some Christians?

While surely there are Christian anti-Semites, the more serious and pervasive problems arise from various forms of anti-Judaism. On the more conservative side of the church there are the very common assumptions that all Pharisees were legalistic hypocrites. You still hear the term “Pharisee” used to refer to an unpleasant Christian legalist. For Jews this is often seen as an unjust slur on the very group of people that enabled Judaism to survive after the disastrous Jewish revolts of the late first and early second centuries CE. As I indicated in the book, while Jesus certainly did have conflicts with some Pharisees, he was closer to them than any other contemporary Jewish group. Many of his earliest followers (including Paul) were Pharisees and proud of their heritage. The conflicts you have within a group are often fiercer than conflicts with those outside.

While using Pharisee as a slur is both historically dubious and potentially hurtful, the second concern is more serious. I continue to read in books by both popular writers and competent scholars that with the coming of Christ, Judaism is passé. All the benefits once accrued to Israel are now assigned to the church. This was a particularly common view before the Shoah but is still popular—and potentially lethal. And in the end, it is not the clear teaching of the New Testament. It was certainly not what the Apostle Paul thought! Or the Lord Jesus, for that matter.

On the left most would decry antisemitism. But in recent years among both Mainline and Evangelicals a justified concern for the plight of the Palestinians in Israel has produced actions and speech that risk anti-Judaism, if not antisemitism. While it is perfectly permissible and appropriate to critique the government of Israel for its policies, it is dangerous to assert that Jews have no right to a place in their ancient homeland, in spite of the fact that their literature, both ancient and modern, was suffused with a longing for their lost homeland. For many, if not most Jews, this is not simply a political conviction, but a deeply held religious one. One Palestinian Christian leader asked a friend when the Jews were going finally to give up their claim on the land of Israel. He replied, when you Christians give up the doctrine of the Incarnation.

In general, Christians would be better served not theologizing about the state of Israel. Talk politics and policy, justice and injustice, but don’t use Christian theology to seek to delegitimize the Jewish state. It does not convince Jews (either secular or religious) and only demeans their sacred Scriptures and traditions. 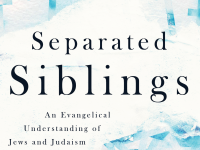