By Motasem A Dalloul We are told that Israel holds values and culture in common with the US and the West.

If that is the case, then it tells us more about the West than Washington, London, Berlin and Paris will ever admit.

In January 2006, the Palestinian Islamic Resistance Movement — Hamas — won a resounding victory in the parliamentary election, with 74 out of 132 seats. Its main rival, the secular Palestinian National Liberation Movement, Fatah, won 45 seats. According to Hana Naser, the head of the Central Election Commission, 77 per cent of eligible Palestinians cast their votes in that historic election, which was monitored by several international bodies.

The Emory Report reported that: "The Carter Centre, in partnership with the National Democratic Institute, sent an 85-member team to observe the election, which was found to be peaceful, competitive and genuinely democratic."

Many other monitors certified that the election was transparent and democratic — "free and fair" — but Israel, the US and the West refused to accept the result. They accused Hamas of being a terrorist organisation which adopted violence to achieve its goals.

The US and the international community put three major conditions on recognition, which were actually just a pretext to continue their boycott of the democratically-elected Hamas. The Middle East Quartet — the US, EU, UN and Russia — spearheaded these conditions: recognising Israel; abiding by previous diplomatic agreements between Israel and the PLO; and renouncing violence. Legitimate Palestinian resistance against Israel's military occupation is still denounced as "terrorism" and "violence".

Hamas, in fact, did not reject these conditions. It said that if Israel also respected the previous agreements; rejected violence and stopped its daily killing of Palestinians; and allowed those Palestinians forced out of their homes from 1948 onwards to return as per international law, it would consider them. The movement insists to this day that it would reconsider its policies if Israel respects Palestinian rights and demonstrates that it is committed to international legitimacy.

Instead, Israel and the international community helped the Palestinian Authority led by Fatah to oust Hamas in the occupied West Bank. When it failed to do the same in the Gaza Strip, the occupation state imposed a strict siege and has since launched several major military offensives on the Palestinians in the enclave in an attempt to get the people to turn against the de facto government, Hamas. This strategy has also failed so far.

The response to Palestinian democracy is very different to what passes for democracy in Israel, where 20 percent of the population who are not Jews are treated as second class citizens. When an Israeli extremist convicted of criminal charges related to racism, fascism and violence against the Palestinians and even secular Jews, won a seat in the Israeli parliament – the Knesset – and joined a coalition government with a corrupt prime minister, the congratulations flowed in from abroad.

The latest Israeli government has been described as the most extreme far-right in history; the extremism bar was already set very high before Benjamin Netanyahu cobbled together his new coalition. His ministers include Itamar Ben-Gvir and Bezalel Smotrich, two far-right extremists who have openly defended the murder and ethnic cleansing of Palestinians.

Ben-Gvir has links to the organisation founded by US-born Jewish extremist Rabbi Meir Kahane, who openly advocated the violent expulsion of Palestinians from their homes in occupied Palestine. He was a member of Kahane's Kach party, which was banned by the US under anti-terrorism laws (and was even banned in Israel for being too extreme), and is currently head of the Jewish Power party, which is made up of many Kahanists.

Smotrich and Ben-Gvir, said the Middle East Institute, "are considered radical even by the standards of Israel's right wing… They have demanded that the rules of engagement be loosened to make it easier for Israeli forces to shoot Palestinians… Ben-Gvir repeatedly pledged to relocate Bedouins and Palestinian Israeli citizens to neighboring Arab states." What is this if not terrorism?

Such terrorism as advocated by these mainstream Israeli politicians and their parties violate international law, the resistance by Hamas and other factions is referred to by the US and the West as "terrorism" and yet is completely legitimate according to international law. Despite this, there is no talk of boycotting the Israeli government in which these right-wing monsters ply their evil trade.

On Tuesday, US Ambassador to Israel Tom Nides denied that the Biden administration has imposed a boycott of Ben-Gvir. "There is no boycott. I do not do boycotts… We are going to work with the Israeli government," Nides told Israel's Kan public broadcaster. "We will work with everyone [in the Israeli government]… It is a democratically-elected government."

British Prime Minister Rishi Sunak congratulated Netanyahu, who put his coalition together only by getting the support of the extremist parties. "On behalf of the UK, I would like to congratulate @netanyahu on his victory in the Israeli election," tweeted Sunak. "Across areas like trade, security and technology there is a huge amount our countries do together and I look forward to working with the returning Prime Minister."

EU Foreign Policy Chief Josep Borrell ignored everything we know about the Israeli government and the terrorism and extremism of its ministers. "Israel," he insisted, "is one of the EU's closest partners in the Middle East."

However, Simon Tisdall had this to say in the Guardian about the Israeli government: "It obstructs a two-state solution to the Palestinian conflict and scorns the UN and international law. It refuses to back sanctions on Russia over Ukraine. It rubbishes the 2015 Iran nuclear deal while threatening war. It sells spyware and arms to authoritarian regimes that abuse human rights.

As far as Sunak is concerned, though, he simply urged Israeli ministers to "refrain from inflammatory language and demonstrate tolerance and respect for minority groups." US and EU officials echoed his call. Comparing these reactions and stances with the reactions to the 2006 Hamas election, I see nothing but injustice.

When Hamas won in 2006, Jimmy Carter advised the US administration and the West: "If you sponsor an election or promote democracy and freedom around the world, then when people make their own decision about their leaders, I think that all the governments should recognise that administration and let them form their government."

Carter's advice regarding Hamas fell on deaf ears. However, the movement told him that it would be moderate and would change its policies. The current Israeli ministers insist on their extremism and violence, and have an appalling track record, and yet they are accepted by the West.

Why does Israeli democracy matter, but Palestinian democracy doesn't? We are told that Israel holds values and culture in common with the US and the West. If that is the case, then it tells us more about the West than Washington, London, Berlin and Paris will ever admit. 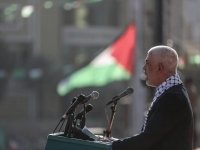