Esther Bejarano learned to love music from her father Rudolf Loewy, a cantor in the Jewish community of the southwest German town of Saarlouis, where she was born in 1924. 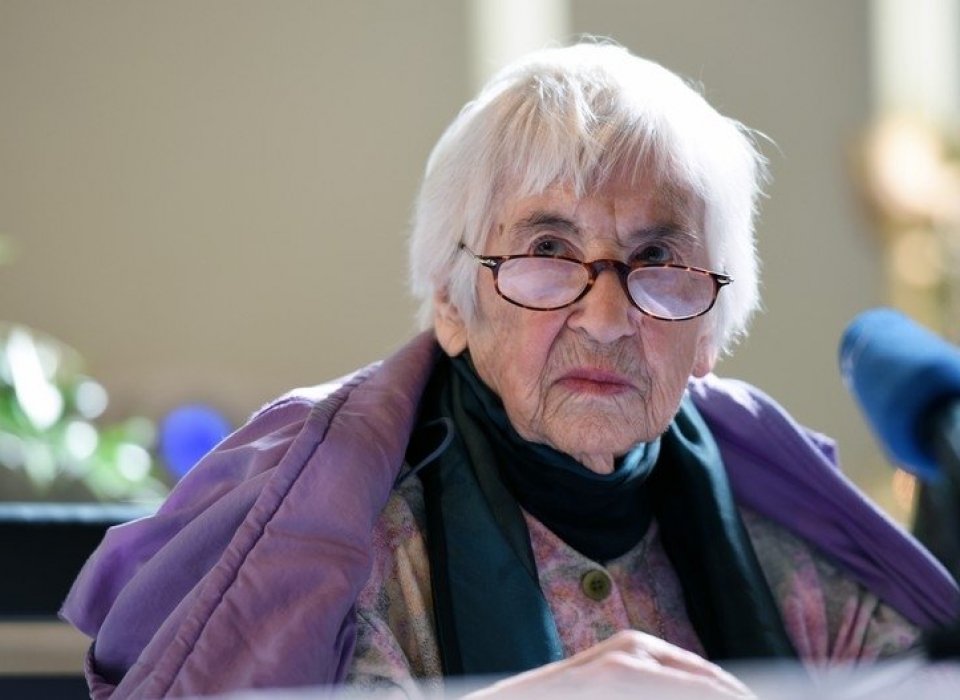 That was lucky for her, because music literally saved her life.

Bejarano recently spoke to The Electronic Intifada at her home in Hamburg.

When she was 15, Bejarano’s parents sent her to a Zionist camp to prepare for emigration to Palestine. But in 1941, all the teachers and students were arrested by the SS and moved to a work camp near Berlin.

Bejarano was sent to Auschwitz, in German-occupied Poland, where the Nazis allowed her to play in the women’s orchestra as an alternative to the hard labor that quickly killed many.

Then she was was sent to Ravensbrück concentration camp in northern Germany. In April 1945 she escaped from a forced death march, and a few weeks later played music as allied troops liberating Germany from the Nazis burned an image of Hitler.

After the war, Bejarano emigrated to Palestine, but her aversion to Israel’s policies towards the Palestinians eventually led her to return to Germany.

She says she has been called an anti-Semite for speaking out against Israel’s inhumane treatment of Palestinians.

But Bejarano knows no fear and continues to raise her voice, calling Israel’s government “fascist” and saying she supports BDS – boycott, divestment and sanctions – if it helps challenge Israel’s persecution of Palestinians.

It was after the Kristallnacht pogrom against Jews in November 1938 that Bejarano’s parents sent her to the Zionist training center to prepare to go to Palestine.

For some Jews it was an option to flee Nazi persecution, but the outbreak of the war blocked her emigration.

On 20 April 1943, Bejarano arrived at Auschwitz after a horrific five-day journey in a cattle car. She was assigned to gather large rocks, grueling and potentially lethal work.

Her talent for music opened the door to the first Women’s Orchestra of Auschwitz where she played the accordion.

Bejarano says that she had no idea how to play the instrument but she knew piano and considered the accordion keyboard to be the same – quickly learning it was a matter of life and death.

The orchestra had to play marches for the female prisoners as they went to and from their forced labor, and also as trains arrived bringing new victims of the Nazis to the camp.

As long as the camp commanders were satisfied, the orchestra’s members could avoid a certain death in the gas chambers.

When Bejarano was in Auschwitz, the International Red Cross searched for mischling prisoners. Because she had a Christian paternal grandmother, the Nazis considered Bejarano a mischling – a person of mixed Jewish-Aryan ancestry. Therefore she should not have been deported to an extermination camp, according to Nazi law.

Her friends convinced her to report to the Red Cross as a mischling because it offered a chance to get out of Auschwitz. If she survived, “you can tell people later what we’ve been through,” she recalls them saying.

Bejarano was accepted and transferred to Ravensbrück women’s concentration camp in September 1943.

Bejarano survived the hardships of Ravensbrück where she had do forced labor for German industrial giant Siemens.

Sadly, the mischling status offered no protection for her parents, Rudolf and Margarethe Loewy.

They were both shot by the Nazis in the woods of Kovno, Lithuania, in November 1941.

Not long ago, Bejarano learned that her sister Ruth was murdered in Auschwitz on 1 December 1942

“This is so fateful because I came to Auschwitz in April 1943 and if she had lived I would have met her there,” she says.

After liberation by American and Soviet troops in 1945, Bejarano went to Palestine where her sister Tosca – at the wish of their parents – had settled before the war.

Bejarano was part of a group that traveled by boat from Marseille to Palestine. “We wanted to develop the country together with the Palestinians,” she recalls. “In general, the Palestinians helped us. Not only us, but also the first Jews who came to the country.”

“We wanted to develop the land together. But it was different with David Ben-Gurion and Golda Meir,” she says, referring to Israel’s founding Zionist leaders. “They turned Zionism upside down and then the Zionists said ‘we are the ones who own the land.’ That was not our idea.”

Still, Bejarano spent 15 years in Israel, where she married Nissim Bejarano, a truck driver born in the country to a family that had come to Palestine from Bulgaria.

“My husband and I could not stand Israeli politics. It was a catastrophe,” she says. “Life was difficult because we did not agree with the terrible things that were done to the Palestinians.”

Israel “fought against them, threw the Palestinians out. They didn’t leave on their own, they were forced to leave. We just could not stand that.”

“I was a soldier in the war for independence against the British. I felt it was justified to fight,” she says. “I did not touch a gun. I gave many concerts.”

Her husband Nissim was a pacifist and after participating in two wars he couldn’t do it anymore, Bejarano adds. “He had seen what the Israelis had done to the Palestinians and he could not stand it.”

Refusing military service was also difficult. “He would have ended up in prison so we had no other choice than to leave,” Bejarano says.

“I had German citizenship and I spoke German,” she says, so they moved back to the country of her birth.

“It was very difficult because it was the country of the perpetrators.”

In Germany, Bejarano still had to grapple with the reality in Israel. She says many people in Germany oppose Israel’s policies but those who speak out are often accused of anti-Semitism.

“They also have called me an anti-Semite,” Bejarano says. “I always say I am against the inhuman policies towards the Palestinians, and against war. With war you cannot achieve peace. Then they frame me as an anti-Semite.”

In Germany it is almost impossible to criticize Israel for the simple reason that “they feel responsible for the Jews that were left and then founded this Jewish state,” Bejarano explains. “They protect them and see it as their duty to do so. When someone speaks against Israel then it is a big theater, they [pro-Israel groups] absolutely don’t want that.”

As a result, people who want to organize events in Germany about Israeli policies, such as confiscation and settlement of Palestinian land, face constant attempts to stop them.

“It is a scandal because the terrible policies of Israel need to be clarified,” says Bejarano.

“If our government – for once – would state, ‘We are friends of Israel but its policies must change because that is not the way to go,’ then nobody would try to block events,” she asserts.

“The only option is that you enlighten the people, and you say, ‘Listen, that is not how it is.’”

Referring to present-day Israeli leaders, such as Prime Minister Benjamin Netanyahu and former defense minister Avigdor Lieberman, Bejarano says, “They are fascists. It is a fascist government. I have no other name for it.”

The space to debate BDS – boycott, divestment and sanctions – activism is very limited in Germany.

“Whether it [BDS] helps, that’s another issue. For many people here it is out of the question,” Bejarano observes. “But I say, if it helps to put anything in the way of the terrible [Israeli] policies, then I am for it. Because I have experienced what fascism is.”

Bejarano adheres to the mainstream view that peace is achievable with a two-state solution.

“The only way to make peace possible is that a second [Palestinian] state emerges and that someday they have economic relationships with each other,” she says. “Then you can talk about friendship.”

When asked if this is possible with some 600,000 Israeli settlers residing in the occupied West Bank, she replies, “They have no business there. Nothing at all, and you know who these settlers are? These are Americans and Russians, Ukrainians. They were not born there. Absolutely not.”

She adds that the idea that the land “belongs to the Jews because they lived there 2,000 years ago is the biggest nonsense there can be.”

“There were so many Turks and Arabs who have always lived there. The Jews came later,” she states, insisting that all the settlers in the West Bank should leave.

Anti-Semitism was not invented by Hitler

Bejarano speaks an important truth that few dare say: “In Germany, and many other countries, one does not distinguish between Judaism and Zionism. They think Israel, Zionism and Judaism are all the same.”

That is how “they want to protect themselves from the new anti-Semitism, but anti-Semitism has existed since the Middle Ages,” Bejarano states. “Anti-Semitism was not invented by Hitler but by the Catholic Church.”

She says the phenomenon continues to exist among Germans, as it does in other countries.

“The situation in Gaza is really bad,” says Bejarano. “You have to see how the people live there and how the Israelis act against them.”

She is appalled that when young Palestinians protest near the boundary fence – as they have been doing regularly as part of the Great March of Return rallies since last March, “They are simply shot” by Israeli snipers.

“They say ‘Hamas sent its rockets to Israel and they are responsible for the war,’” Bejarano states, recalling Israel’s excuses. “But who started it? Not the Palestinians. It’s the Israelis who sent all the Palestinians out of the country.”

Her message to young Palestinians is, “I want you to keep it up and I hope that you will soon have your own country. But I cannot do anything about it.”

She hopes Palestinians “try to come to terms with their lives and not become racist. Every human being is worth something. And you have to accept if someone does a good thing and you have to reject the bad things people do.”

“I wish the same for young Israelis. A lot of them left Israel because they have no way to live there,” she adds, referring to the high cost of housing and how many young Israelis don’t want to be conscripted into the army.

“They simply cannot live in Israel anymore. That is why so many have moved to Berlin.” 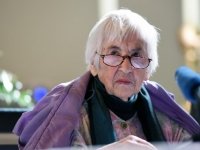