Is it possible to discuss the sources of Israeli disunity without addressing the country’s military regime in the West Bank and siege on Gaza? Can Israelis ever accept Palestinians as part of that conversation?

An ultra-Orthodox Jewish man argues with an Israeli police officer during a demonstration against businesses that operate on Saturdays in Jerusalem, August 12, 2017. (Yonatan Sindel/Flash90)

The plight, let alone the very existence of millions of disenfranchised people living under Israeli military rule, was nowhere to be found at the ADL’s first-ever Summit on Social Cohesion in Israel Tuesday.

“We are no longer the occupiers, we have become the occupied,” former Defense Minister and erstwhile Labor Party leader Amir Peretz declared ironically to the hundreds of people gathered at the Anti-Defamation League-organized event at a hanger in Tel Aviv’s Port.

“Our children may leave the territories but the territories will never leave them,” Peretz quipped, hinting at the human cost average Israelis pay for maintaining endless military rule in a country with mandatory conscription.

The major factor underlying Israeli disunity, according to the former defense minister, is 50 years of military dictatorship in the occupied territories. And any search for unity, must go beyond the IDF and Israel’s wars, which consistently bring together Jewish Israelis of all political stripes.

It was not surprising, then, that Peretz was the only speaker to be heckled. “This isn’t a political event! I thought we came here to talk about social cohesion!” one audience member shouted until security approached.

And in a sense she was right.

Can talking about social cohesion, or lack thereof, ever be considered apolitical in today’s Israel? Can we actually discuss the foundations of Israeli disunity without addressing Israel’s military dictatorship over the West Bank and siege on the Gaza Strip, both of which, as Peretz sees it, bleed over the Green Line and lead to an increase of violence within Israeli society?

There was no shortage of speakers Tuesday who decried the state of extremism and tribalism in Israel. Tel Aviv Mayor Ron Huldai called racism and inter-group divisions “a bigger threat than anything else.” Former Defense Minister Moshe Ya’alon excoriated Israel’s lack of leadership and growing socio-economic gaps, pondering why social unity cannot exist outside the Israeli army. Former U.S. Ambassador to Israel Dan Shapiro warned that the Israeli government’s refusal to work toward a two-state solution, along with its often illiberal values, will have an impact on diaspora Jewry.

At a time when Jews around the world are feeling more and more estranged from Israel due to its growing extremism, not to mention its disrespect and dismissal of non-Orthodox streams of Judaism, these are anything but empty words. The problem, then, was that there was hardly any mention of how we got here.

The summit sought to tackle one of the most pressing issues plaguing Israel, where national solidarity, at least in name, a once-dominant part of the national ethos, has been replaced by a sense of individualism and distrust between and among various groups. It is precisely this change that pushed President Reuven Rivlin to deliver his now-famous “Four Tribes” speech in 2015, in which he forewarned that Israel’s fraying identities would lead to a “transformation that will restructure our very identity as ‘Israelis.’” Since then, so it goes, Israelis of all religious, national, and political persuasions — rightists and leftists; ultra-Orthodox and secular; Arabs, Ashkenazim and Mizrahim — have only grown more ensconced in their identities.

According to a public opinion poll presented by ADL Israel Director Carol Nuriel at the conference Tuesday, two out of three Israelis believe their society is divided. Fifty-seven percent believe Israel will remain divided, with Arab citizens most pessimistic. Only 51 percent of Israelis support keeping Arabic as an official language of the state, with 32 percent outright opposing it. And according to the poll, the biggest causes for division are a lack of trust in Israel’s political leadership, its rabbinical institutions, in both the traditional and new media, the Israeli legal system, and relations with Jews around the world. Far and wide, the survey found, the IDF remains the biggest unifying factor in Israeli society.

These statistics numbers affirm what we already know, yet the total lack of context behind them — beyond what Huldai and Ya’alon described as “racism” and a “lack of leadership” — leave much to be desired. Peretz, it seems, was the only one bold enough to provide at least one fundamental reason for the seemingly irreparable rifts — and even that, for some, was too political.

Perhaps that should come as no surprise when considering that only two of the 40 speakers were Palestinian. (A panel on the “war of narratives” featured filmmaker Ibtisam Mara’ana Menuhin; Suhil Karram, founder and owner of Ashams Radio, spoke on a panel of journalists — all of them men, save for moderator Oshrat Kotler — about the media’s role in shaping the public discourse.) Suffice it to say, not a single Palestinian from the occupied territories was present to give their thoughts on the possibility of Israeli national cohesion.

That may seem like a trivial or even nonsensical point to most but it is worth interrogating more deeply. Approximately three million Palestinians live in the West Bank and another almost-two million in Gaza. They have been living under Israeli military rule for five decades yet not a single Palestinian was there to give her or his input on what Israeli national unity means for the the millions of disenfranchised subjects of that nation. When you remove them from the equation it becomes far easier to discuss issues of national discord.

And that’s precisely the point: Palestinians simply cannot, a priori, be counted as part of Israel’s body politic. (The settlers who were invited to speak on various panels blended in naturally, however.) Keeping them out of the conversation is no great task considering they were never part of it to begin with. But as the 50-year political reality of occupation and settlement building has led to a de facto single state where only one group has full political and civil rights, there is no reason Palestinians shouldn’t have a say when it comes to the cohesion of the society that lords over them.

The prospects of Palestinian inclusion are so beyond the pale that Israelis, even the most progressive, have a hard time processing the basic contours of that proposition. The repercussions of that denial may not be felt in real time, but they are surely laying the groundwork for a grim future for both peoples who share this land. 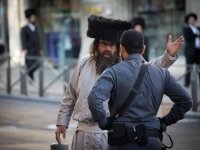