What is – and what is not – antisemitic misconduct 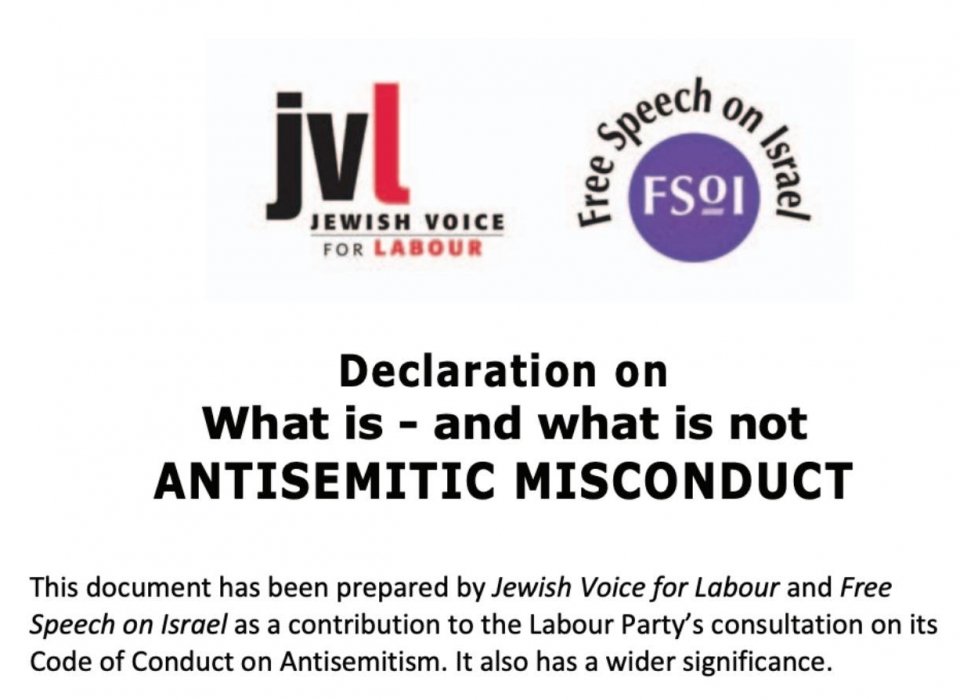 There has been extended controversy over the adoption by the Labour Party of the International Holocaust Remembrance Alliance (IHRA) Working Definition of Antisemitism. It has been widely recognised that the wording of that definition is so loose that it requires extensive interpretation if it is to be even potentially helpful for disciplinary purposes.

Our submission is based on an understanding of the nature of antisemitism which we believe avoids the obscurities and ambiguities of the IHRA working definition:

Antisemitism is a form of racism. It consists in prejudice, hostility or hatred towards Jews as Jews. It may take the form of denial of rights; direct, indirect or institutional discrimination; prejudice-based behaviour; verbal or written statements; or violence. Such manifestations draw on stereotypes – characteristics which all Jews are presumed to share.

We believe that the following comments will be helpful to those drawing up Labour’s disciplinary code, and perhaps more widely.

Implications of taking this view of antisemitism

Racism commonly stereotypes groups as inferior in ways that enable discrimination against them. Such stereotypes function by scapegoating a targeted group, deflecting blame for society’s problems from their real causes. Antisemitic stereotyping has historically been used to dehumanise Jewish people, giving licence to treat them in ways not otherwise acceptable. Use of such stereotypes is unarguably antisemitic conduct.

Certain words and phrases that refer to Jews in a derogatory way are unquestionably antisemitic. Terms which associate Jews with malevolent social forces clearly fall into this category. Extreme examples are the blood libel (that Jews kill Christian children to use their blood in religious ceremonies), and the claimed existence of a powerful but secret Jewish cabal that controls the world.

Seemingly neutral or positive terms can also be used in antisemitic ways. For example, assertions that Jews are unusually clever or especially ‘good with money’ make the unwarranted assumption that all Jews share similar characteristics. Commonly, there is a negative, antisemitic edge to such views.

Jews, Israelis and Zionists are separate categories that are too frequently conflated by both supporters and critics of Israel. This conflation can be antisemitic. Holding all Jews responsible for the actions of the Israeli government is antisemitic. Many Jews are not Zionist. The majority of Zionists are not Jewish but fundamentalist Christian Zionists. Over 20 percent of Israeli citizens are not Jewish.

Free speech is legally protected. Within these legal limits political discourse can be robust and may cause offence. There is no right not to be offended. The fact that some people or groups are offended does not in itself mean that a statement is antisemitic or racist. A statement is only antisemitic if it shows prejudice, hostility or hatred against Jews as Jews.

The terms ‘Zionism’ and ‘Zionist’ describe a political ideology and its adherents. They are key concepts in the discussion of Israel/Palestine. They are routinely used, approvingly, by supporters of Israel, but critically by campaigners for Palestinian rights, who identify Zionist ideology and the Zionist movement as responsible for Palestinian dispossession. Criticising Zionism or Israel as a state does not constitute criticising Jews as individuals or as a people, and is not evidence of antisemitism.

There have been claims that any comparison between aspects of Israel and features of pre-war Nazi Germany is inherently antisemitic. Similar objections have been raised to likening Israel’s internal practices to those of apartheid South Africa. Drawing such parallels can undoubtedly cause offence; but potent historical events and experiences are always key reference points in political debate. Such comparisons are only antisemitic if they show prejudice, hostility or hatred against Jews as Jews.

A common focus for allegations of antisemitism is the campaign for boycott, divestment and sanctions (BDS) targeted on Israel. The three elements of BDS are internationally recognized as legitimate and non- violent strategies for securing political change. So advocating for BDS would only be antisemitic if accompanied by evidence that it is motivated not by this purpose but by racially-based hostility towards Jews.

6. When Antisemitism Is Alleged

As with any allegations of racism, accusations of antisemitism must be taken seriously and investigated. But principles of natural justice and due process must be respected and applied: the person accused should be accorded the normal presumption of innocence until the case is resolved. Allegations do not constitute proof.

Antisemitic attitudes may be more or less intense.* Some people are deeply antisemitic, others less so. Yet others whom it would be unreasonable to class as antisemitic may nevertheless hold some attitudes, in dilute form, which will make some Jews uncomfortable. Following a finding of antisemitism there remains a decision to be made about whether discussion and education, rather than a formal disciplinary approach, is more appropriate.

Indirect discrimination could inadvertently occur, where actions have the effect of selectively disadvantaging Jewish people even though no hostile motive towards Jews is present. Once a case of such discrimination comes to light, those responsible should take all reasonable steps possible to eliminate the problem. Unwillingness to take such steps would be evidence of antisemitism.

The systematic murder of millions of Jews (and so many others) during the Second World War is exhaustively documented. It is therefore inconceivable that Holocaust denial or expressions of doubt over its scale could be motivated by genuine investigatory scepticism. The implication of antisemitic intent is, for practical purposes, inescapable.
* See Institute of Jewish Policy Research report Antisemitism in Contemporary Great Britain, 2017

The understanding of antisemitism on which this analysis is based reaffirms the traditional meaning of the term. This is important in the light of attempts to extend its meaning to apply to criticisms often made of the state of Israel, or to non-violent campaigns such as BDS. A charge of antisemitism carries exceptional moral force because of the negative connotations rightly attaching to the term. It is illegitimate to make such claims to discredit or deter criticism, or to achieve sectional advantage. To do so is to devalue the term.

To be clear: conduct is antisemitic only if it manifests ‘prejudice, hostility or hatred against Jews as Jews’. 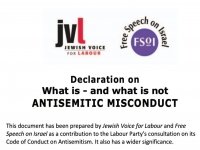