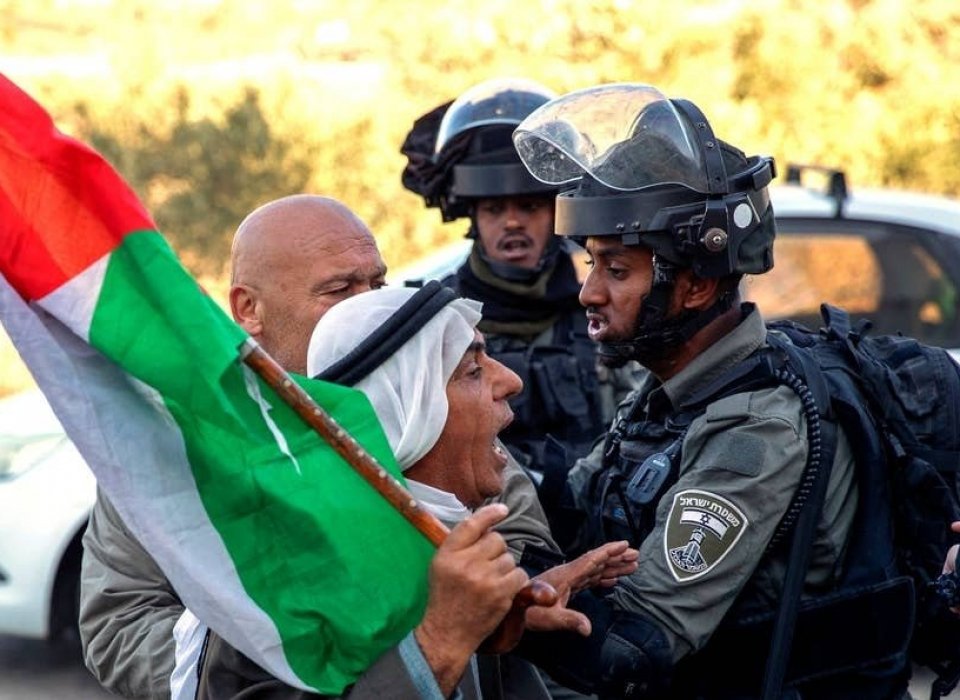 A Palestinian man holding his national flag is stopped by Israeli security forces near Nablus in the West Bank, on Sunday.Credit: Majdi Mohammed,AP

The UN Mideast envoy warned Tuesday that without quick and decisive action to address the key drivers of the Israeli-Palestinian conflict, the region risks plunging into “another deadly escalation of violence.”

Tor Wennesland told the UN Security Council it’s essential that the parties “calm things on the ground,” reduce violence across the Palestinian territories, avoid unilateral steps including new Israeli settlement building and solidify the May cease-fire that ended an 11-day conflict between Israel and Hamas which controls the Gaza Strip.

In addition, he called for urgent action to tackle the severe fiscal and economic crisis threatening the stability of Palestinian institutions in the West Bank. But he warned: “Even a full and immediate financial package may not be sufficient or come quickly enough – if at all – to help buffer the consequences of the current situation.”

Wennesland told reporters afterward there is “broad consensus” among the 15 council members that to prevent a possible imminent conflict “there needs to be a pushback on activities in and around Jerusalem and the West Bank,” financial stability for the Palestinian Authority so it can pay salaries, and a halt to settlement activity.

As the UN special coordinator for the Middle East peace process, Wennesland represented the United Nations at the first in-person meeting in two years of envoys of the so-called Quartet of Mideast mediators on November 18 in Norway’s capital, Oslo.

The Palestinians have sought an independent state in the West Bank, Gaza and East Jerusalem, territories seized by Israel in the 1967 war. Israel withdrew from Gaza in 2005 but imposed a crippling blockade when the Palestinian militant group Hamas seized power from Palestinian President Mahmoud Abbas’ forces in 2007.

Wennesland called Tuesday for a coordinated approach to “restore a political horizon that will help stop the endless cycle of crisis management and move back towards meaningful negotiations to end the (Israeli) occupation and resolve the conflict on the basis of UN resolutions, international law and previous agreements.”

He said Secretary-General Antonio Guterres supports holding a Quartet meeting at ministerial level to focus on medium and longer-term issues to achieve a two-state solution, and he has spoken to the other members, but “we are not there yet.” He added that the envoys are working very hard and are in weekly contact.

Russia’s deputy UN ambassador Dmitry Polyansky also warned of the risks of “large-scale hostilities” like the Israel-Hamas conflict in May and called on the international community to urgently ensure stability on the ground, provide humanitarian aid to the Palestinians, and create conditions for resuming peace negotiations.

He said the Quartet, which was established in 2002, is the only internationally recognized body to bring the Middle East peace process back on track. It has been criticized for its failure to get either Israel or the Palestinian Authority to change their policies and negotiate an end to their more than three decades-old conflict.

Polyansky said Russia has been pushing for a ministerial meeting of the Quartet which Moscow feels “is overdue, but not everyone from our partners is ready for such a move right now.”

U.S. Ambassador Linda Thomas-Greenfield, who recently visited Israel and the West Bank, told the Security Council that the Biden administration still strongly believes in a two-state solution “in which a Jewish and democratic Israel lives in peace alongside a sovereign, viable Palestinian state.”

She reiterated U.S. opposition to Israeli settlement expansion, saying “the practice has reached a critical juncture, and it is now undermining even the very viability of a negotiated two-state solution.”

Thomas-Greenfield said Israel and the Palestinians “are locked in a spiral of distrust” that is preventing cooperation, and rebuilding “some degree of confidence in each other” is key to advancing toward peace.

She made no mention of the Quartet but said that in her meetings “both sides spoke of the need for confidence-building measures to break down the walls of distrust.”

Trust-building needs to be worked out mainly between Israelis and Palestinians, the U.S. ambassador said, but the Security Council can facilitate constructive steps by enforcing its resolutions “to constrain Iran’s regional malign activities, nuclear threats, support for terrorist organizations like Hamas and Hezbollah."

Thomas-Greenfield said the council can also denounce incitement to violence by terrorist organizations or individuals and promote efforts to improve the lives of ordinary Palestinians by urging Israel to grant more work and building permits and facilitating humanitarian and reconstruction assistance to Gaza. 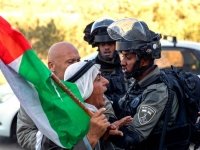