Palestinian laborers line up to cross a checkpoint at the entrance to the Israeli settlement of Maale Adumim, near Jerusalem, June 30, 2020.  © 2020 Oded Balilty/AP Images

For years, discussions on Israel and Palestine in international fora like this have been rooted in the assumption that Israel’s 54-year occupation is temporary and that a 30-year peace process will soon bring an end to Israeli rights abuses. These assumptions have obscured the reality of Israel’s discriminatory rule over Palestinians.

In April, Human Rights Watch released a 213-page report, “A Threshold Crossed,” finding that Israeli authorities are committing the crimes against humanity of apartheid and persecution. We reached this determination based on our documentation of an overarching government policy to maintain the domination by Jewish Israelis over Palestinians across Israel and the OPT, coupled with systematic oppression and grave abuses committed against Palestinians living in the OPT, including East Jerusalem.

In the months since, a growing chorus of voices, from former Israeli ambassadors to South Africa and current Knesset members to the ex-UN Secretary General and authorities from South Africa, Namibia, the OIC, France and Luxembourg, among others, have referenced apartheid in relation to Israel’s discriminatory treatment of Palestinians.

Maintaining the status quo is the policy of the Israeli government formed in June. As an official close to Prime Minister Bennett said, “there is no diplomatic process with the Palestinians and neither will there be one.”

It is time for the international community to publicly recognize that apartheid, and parallel persecution, is the reality for millions of Palestinians. Correctly diagnosing a problem is the first step to solving it.

The United Nations played a central role in undoing South Africa’s system of apartheid. It can do so again. As a first step, this Council rightly put in place a Commission of Inquiry to investigate “root causes of recurrent conflict, including systematic discrimination and repression based on national, ethnic, racial or religious identity.” We urge all states to engage constructively with the COI in fulfilment of its important mandate. 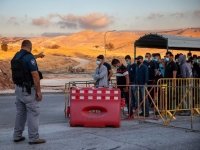