The Stone of Hope

On Being with Krista Tippett

Given the events of recent days, we asked our friend and teacher John Paul Lederach to offer a reflection for this week’s Pause. He’s spent his life walking with people in many cultures through violent conflict towards transformative change. I’m so grateful for the perspective he opens here, and the fierce/gentle way he invites us into the truth of our time and ourselves.

The images of this week remain seared in our minds. While painful, they will not and should not be unseen, precisely because they help us look more carefully at what peers back at us from our national mirror.

We are not looking at a fringe few. We are gazing upon ourselves.

The images reminded me of the action and the words of Zechariah when pondering the question, “What are these wounds between your arms?” With hands moving toward heart the response emerged, “the wounds I received in the house of a friend.”

We are a deeply wounded nation. We know from trauma studies that our bodies carry the harm, and that the deepest pain is always the one experienced closest to home. Our wider body politic carries, not just the pain of what we witnessed this week, we carry centuries of harm — incited, delivered, and received from within our house.

I have noticed that across a wide and deeply divided political spectrum, most everyone seeks to speak for and protect the Constitution, almost as if our shared document is a victim. I would offer that the deeper casualty lies with the loss of our basic social contract. We note its disappearance when toxic social dynamics spill into the mainstream of our collective life: dehumanization replaces basic respect; blame supplants responsibility; and violence is justified over dialogue.

We also know from settings of armed conflict and from our own exemplars in this country who never stopped building the more perfect union, that it is possible to reverse these dynamics.

Perhaps Dr. Martin Luther King, Jr. captured this better than anyone. He consistently appealed to guiding pillars that sustained the commitment to the social contract while pursuing long sought change for equity and equality in the midst of deep division.

His first pillar referenced the deep soul’s despair that waiting for change was no longer an option. The ploys and pragmatism of politics kept placing true equality just out of reach, deferred to the next election or into potential new legislative goals. Promises no longer sufficed. “The sweltering summer,” as he called it, could no longer accept the “tranquilizing drug of gradualism.” This temporal pillar required such immediate action — and act they did and so must we — that he referred to it as the "fierce urgency of now."

His second pillar constantly reminded people that the struggle for equality and dignity unfolds by way of a long and difficult pathway. So significant was this temporal challenge that in his words, now etched on a national monument, the movement must “hew out of the mountain of despair a stone of hope.” Hope requires patience and persistence precisely because “the arc of the moral universe is long,” even as “it bends toward justice.”

In the midst of the temporal tension playing out between the fierce now and the long arc, Dr. King’s vision never wavered in the third pillar: the commitment to nonviolence and appreciation for our ultimate interdependence. Over and again, his imagination captured the understanding that while the past carries forward profound violation of dignity and the present continues to humiliate and divide, our future is shared. Calling this out in his “I Have a Dream” speech, he noted that across racial divides “their freedom is inextricably bound with our freedom” followed by the shortest single sentence in the speech: We cannot walk alone.

These pillars offer the way forward into renewing our social contract and reversing toxic dynamics.

Act on and walk into what you know to be true. Start local. Reach out beyond your comfort zone.

Commit to nonviolence. Always protect the dignity of others.

Walk together. In this the stone of hope is hewn. 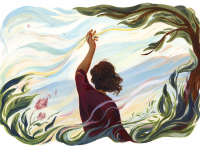