The shocking treatment of Palestinian children

Why Is One Pro-Israel Group Desperate To Keep You From Watching This Video? 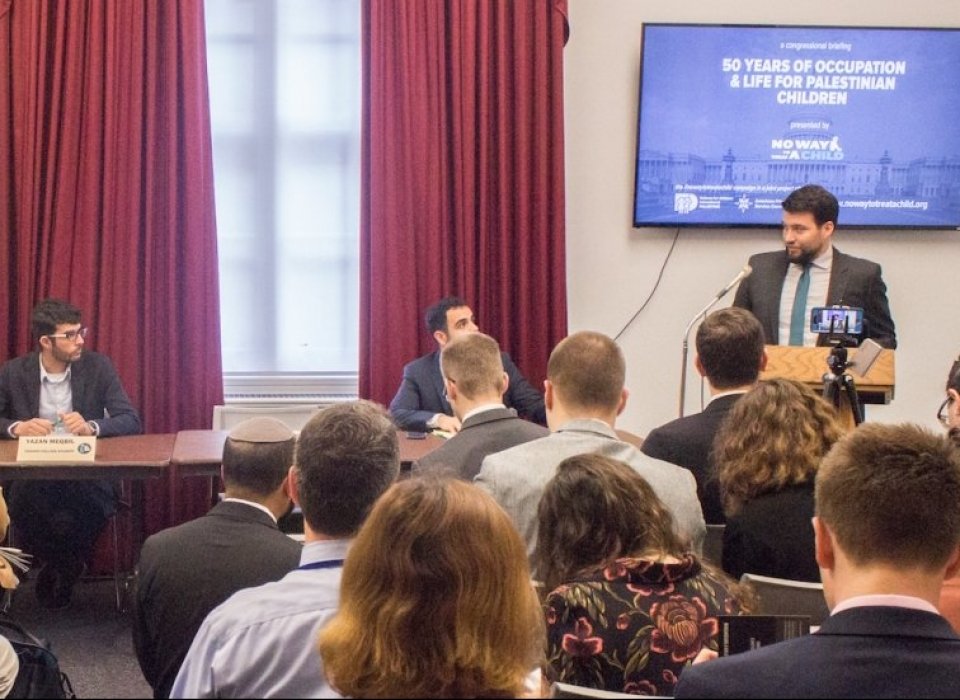 Consider the sequence of events that began on June 8. On that day, an advocacy group called No Way To Treat a Child hosted a panel discussion on Capitol Hill. That’s not unusual. Advocacy organizations hold panel discussions on Capitol Hill all the time; the location makes it easier for congressional staff to attend. What made this one unusual was its subject: the Palestinian experience under Israeli control.

You can watch the panel online. The first speaker was Omar Shakir, the Israel-Palestine director of Human Rights Watch. In dry, rather clinical, terms, Shakir discussed some of the consequences of the fact that West Bank Palestinians are subjects, not citizens, of Israel. He noted, for instance, that in Area C, which encompasses roughly 60% of the West Bank, it is “nearly impossible for Palestinians to obtain a permit to build a home.” When Palestinians build without a permit, the Israeli government often demolishes their homes.

The video of the panel discussion. Listen here or  on Facebook, 1 hour, 35 mins.

Following him was Brad Parker, a staff attorney at Defence for Children Palestine. Observing that, according to the most recent statistics, Israel holds hundreds of Palestinians between the ages of 12 and 17 in its jails, often for stone throwing, Parker explained that the Israeli military frequently arrests Palestinian children at night. They are often bound, blindfolded and transported to a military installation, where they wait until morning before being interrogated without a lawyer and without their parents knowing where they are. They “essentially disappear for 24, 48, 96 hours.” Then they are generally prosecuted in military courts where the conviction rate approaches 100%.

Following Parker was Yazan Meqbil, a young West Bank Palestinian attending college in the United States, who talked about growing up in a house repeatedly slated for demolition. “Every single day,” he said, “I used to wake up hoping my house will not be demolished.” Meqbil ended his remarks by saying: “Palestinians, we all have a dream, to be free, to live like normal human beings. To not be afraid whenever we leave our homes.”

The final speaker was Nadia Ben-Youssef, who works for Adalah–-The Legal Centre for Arab Minority Rights in Israel. She stressed the links between Israel’s treatment of Palestinians in the West Bank and its treatment of Palestinian citizens inside Israel proper. Israel’s Palestinian citizens, she noted, lived under military law until 1966. And even today, she argued, inside the Green Line, Israel privileges Jews over non-Jews in important ways.
I offer this summation to illustrate the shamelessness of the attack that followed. In a video posted June 12, The Israel Project, which is led by former AIPAC spokesman Josh Block, called the event an “anti-Israel hatefest” filled with “hate speech.” Notice the Orwellian turn.

According to The Israel Project, it is not hateful to hold millions of West Bank Palestinians for 50 years as non-citizens, without due process, free movement or the right to vote for the government that controls their lives. It is hateful to criticize Israel for doing so. By that standard, the 2012 documentary “The Gatekeepers,” which featured former heads of the Shin Bet calling Israel’s occupation of the West Bank “brutal,” “colonial” and “unbearable,” was an “anti-Israel hatefest,” too.

Then came the inevitable insinuation of antisemitism. As menacing music played in the background, the video declares that while the panel pretended to be “about human rights,” the speakers “couldn’t stop talking about Jews.” Actually, the panel was entirely about human rights. But, as if uncovering a terrible offence, the video noted that panelists had 17 times used the phrases “Jewish,” “Jewish state,” “Jewish people,” “Jewish citizens” or “Jews.” How sinister! I’m sure Josh Block never uses such despicable phrases when speaking about Israel.

In fact, two of Shakir’s uses of the word “Jewish” came from quotations. He quoted the State Department as calling settlement growth “inconsistent with Israel’s future as a Jewish and democratic state,” and President Obama as saying that settlement growth undermines “Israel as both Jewish and a democracy.” Then again, everyone knows that Obama and the State Department are antisemitic, too.

Most of the references to Jews came from Nadia Ben-Youssef. The video quoted her as saying that “Israel was established as a Jewish state to privilege the rights of Jewish people,” and referring to “this Jewish state that is premised on the basis that you must have greater rights, so that means more Jewish people than anyone else in that land.” The video never explained what’s incorrect or odious about those statements. Their hatefulness is presumably self-evident.

But both statements are true. Yes, Israel’s Declaration of Independence speaks about ensuring “complete equality of social and political rights… irrespective of religion, race or sex.” And yes, Palestinians inside Israel proper (as opposed to Palestinians in the West Bank) enjoy citizenship and the right to vote. But Israel was also explicitly founded to represent and safeguard the Jewish people, and that inevitably privileges Jews over non-Jews.

Jews who immigrate to Israel, for instance, gain citizenship on day one. For non-Jews who wish to immigrate to Israel, by contrast, including Palestinian refugees born inside Israel’s borders, gaining citizenship is virtually impossible. Israel’s flag contains a Jewish star; its national anthem speaks of “the Jewish soul.” In these symbolic ways, too, Israel privileges Jews over non-Jews. As for Israel’s effort to maintain a Jewish majority so that Jews can control the destiny of the state, that’s hardly a secret. It’s a goal that the Israeli government and mainstream American Jewish organizations proudly endorse.

Israel is not the only country on earth to face a tension between its desire to protect and nurture one ethno-religious community and its commitment to provide equality under the law. Many European democracies have immigration policies that favour a dominant ethnic group. Many have crosses on their flags. The 2003 Palestinian Constitution states that “the Palestinian people are part of the Arab nation” and that “the principles of Islamic Shari’a shall be the main source of legislation.” So if a Palestinian state is ever created, it will likely wrestle with the tension between ethnic nationalism and democracy, too.

I believe that in a post-Holocaust world, it’s important to have one country on earth that assumes a special obligation to protect Jewish life. The goal, therefore, should be to minimize the tension between Jewish statehood and liberal democracy as much as possible, while acknowledging that you can never erase it entirely. The challenge, as Martin Buber once put it, is to “do no more injustice to others than we are forced to do in order to exist.”

Zionist thinkers like Chaim Gans and Alexander Yakobson and Amnon Rubinsteinhave sought to meet that challenge. But doing so honestly requires acknowledging that all forms of Jewish statehood entail some moral costs, and that some are more morally defensible than others.

These are the kinds of debates that the American Jewish establishment fears. It fears them because such debates give Palestinians a voice. Given the influence that American Jewish groups wield in Washington, it’s far easier to simply deny Palestinians a platform. That’s why The Israel Project ends its video by urging people to call Rep. Mark Pocan, who authorized No Way To Treat a Child to use a room on Capitol Hill, and “demand that he condemn the event.” The goal is to scare members of Congress so they don’t facilitate such discussions again.

When it comes to Israel, the organized American Jewish community would rather bully than think.

When it comes to Israel, the organized American Jewish community would rather bully than think. That’s what happens when power corrupts. It doesn’t only make you immoral. It makes you dumb.

Peter Beinart is a Forward senior columnist and contributing editor. Listen to “Fault Lines,” his podcast with Daniel Gordis here or on iTunes. 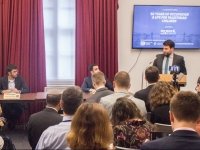