The row over Jerusalem gives American Jews a tough choice

For decades most American Jews have claimed an “Israel exemption”: resolutely progressive on domestic issues, they are hawks on their cherished cause. Racism they would vigorously oppose if applied in the United States is welcomed in Israel. In the row over Jerusalem, pictured here, American Jews will have a tough choice as Israel's right-wing government is increasingly attacking the liberal left / AFP

Reports at the weekend suggested that Donald Trump was about to recognise Jerusalem as Israel’s capital, throwing a wrench in any peace plan.

If true, the US president will have decisively prioritised support for Israel – and pro-Israel lobbies at home – over outrage from Palestinians and the Arab world. But paradoxically, just as American Jews look close to winning the battle domestically on behalf of Israel, many feel more alienated from a Jewish state than ever before.

There has long been a minority whose concerns focused on the occupation, but most American Jews’ support for Israel itself was unwavering. A Law of Return denies non-Jews the right to migrate to Israel. Admissions committees bar Palestinian citizens – one in five of Israel’s population – from hundreds of communities. A refusal of family reunification has torn apart Palestinian families in cases where one partner lives in Israel and the other in the occupied territories.

Most Jews have justified to themselves these and many other affronts on the grounds that, after the European holocaust, they deserved a strong homeland. Palestinians had to pay the price.

Given that half the world’s Jews live outside Israel – the great majority in the US – their support for Israel is critical. They have donated enormous sums, helping to build cities and plant forests. And they have lobbied aggressively at home to ensure diplomatic, financial and military support for their cause. But it is becoming ever harder for them to ignore their hypocrisy.

The rift has grown into a chasm as Benjamin Netanyahu’s right-wing government widens its assault on civil rights. It now targets not just Palestinians but the remnants of liberal Jewish society in Israel – in open contempt for the values of American Jews.

The peculiar catalyst is a battle over the most significant surviving symbol of Jewishness: the Western Wall, a supporting wall of a long-lost temple in Jerusalem.

Jews in the US mostly subscribe to the progressive tenets of Reform Judaism. In Israel, by contrast, the hard-line Orthodox rule supreme on religious matters.

Since the 1967 occupation, Israel’s Orthodox rabbis have controlled prayers at the Western Wall, marginalising women and other streams of Judaism. That has deeply offended Jewish opinion in the US.

Trapped between American donors and Israel’s powerful rabbis, Mr Netanyahu initially agreed to create a mixed prayer space at the wall for non-Orthodox Jews. But as opposition mounted at home over the summer, he caved in. The shock waves are still reverberating.

Avraham Infeld, a veteran Israeli liaison with the US Jewish community, told the Haaretz Israeli newspaper this week that the crisis in relations was “unprecedented”. American Jews have concluded “Israel doesn’t give a damn about them”. 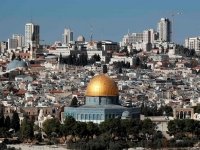