The Palestinian march for freedom is relentless 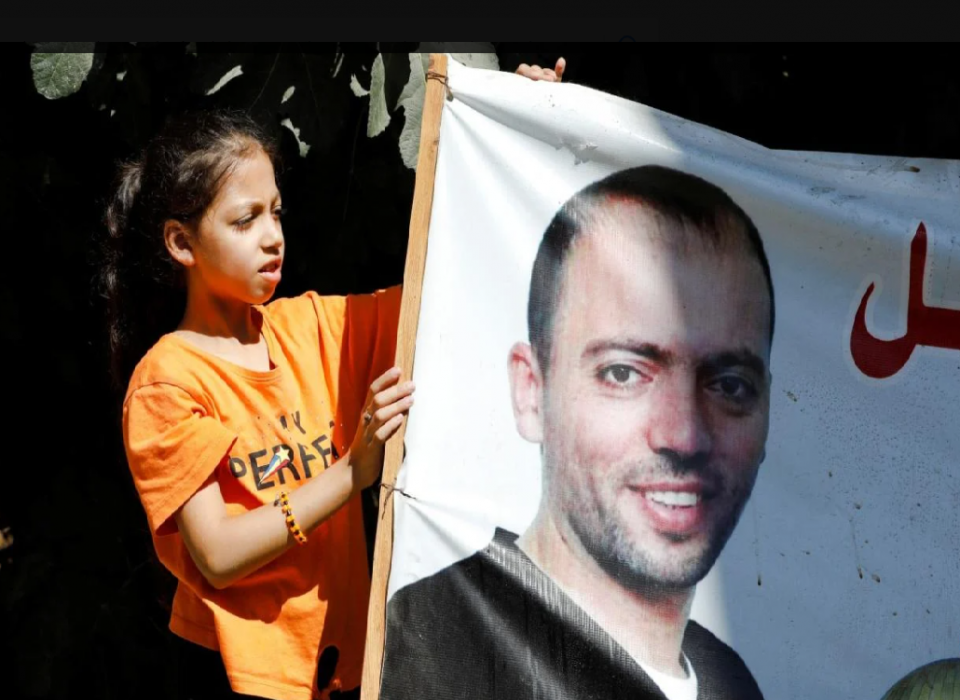 Khalil Awawdeh’s daughter at the family home in Idhna, near Hebron, in the Israeli-occupied West Bank, Aug. 23, 2022. (Reuters)

“Ours is a long and painful march for freedom. Some of us are in prison; others are underground, but we will never cease our fight for our people. We must remain committed to the legacy of our forefathers and our martyrs. We are all brothers, in blood, in the struggle and in faith, so let’s remain united as one people, as brothers and sisters, and carry on, despite the heavy losses and tremendous sacrifices.”

Former Palestinian prisoner Jalal Lutfi Saqr once told me: “As soon as I left prison, I went to (my brother) Nael’s grave. It is adorned with the colors of the Palestinian flag and verses from the Holy Qur’an. I told my little brother how much I loved and appreciated him and that, one day, we would meet again in paradise.” This testimony was published two years ago in my book “These Chains Will Be Broken.”

As a Palestinian, born and raised in a refugee camp in Gaza, I was always familiar with the discourse surrounding political prisoners. My neighborhood, like every neighborhood in Gaza, was populated with a large number of former prisoners and families whose members have experienced imprisonment in the past or present.

However, starting in 2016, my relationship with the subject took on, for the lack of a better term, a more “academic” approach. Since then, I have interviewed scores of former prisoners and members of their families. Some were imprisoned by Israel, others by the Palestinian Authority. I even spoke to prisoners who have experienced the brutality of prisons elsewhere in the Middle East, from Iraq to Syria and Egypt to Lebanon. A few particularly unlucky ones endured multiple prison experiences and were tortured by men speaking different languages.

Some prisoners, now quite old, were imprisoned by the British Army, which colonized Palestine between 1920 and 1948. They were held according to the 1945 Defense (Emergency) Regulations, an arbitrary legal code that allowed the British to hold rebelling Palestinian Arabs without having to provide a reason or engage in due process.

This system remains in effect to this day, as it was adopted by Israel following the end of the British Mandate. Following minor amendments in 1979 and the renaming of the law as the Israeli Law on Authority in States of Emergency, it essentially became today’s so-called administrative detention. It allows Israel to incarcerate Palestinians, practically indefinitely, based on evidence that is kept secret, even from the defense attorney.

This “emergency” law remains in place simply because Palestinians have never ceased resisting. Thousands of Palestinians were held without evidence or trial during the First Intifada, the uprising of 1987. Most of them were kept in horrific living conditions in tent cities in the Naqab desert.

According to the Palestinian Commission on Detainees and Ex-Detainees Affairs, about 1 million Palestinians were imprisoned between 1967 and 2021. There are currently hundreds of Palestinian administrative detainees in Israeli prisons, which violates international law on various counts, such as holding prisoners without trial or due process and transferring prisoners out of occupied territories, the latter being a stark violation of the Fourth Geneva Convention of 1949.

Of course, respecting international law has never been Israel’s strongest suit. In fact, Israel continues to deliberately ignore international law in numerous aspects of its illegal military occupation of Palestine, rationalizing such actions on the grounds of “security.”

Palestinians are also doing what they do best: Resisting, even under the harshest of circumstances and by every means available to them. Tellingly, the strongest resistance takes place inside prison walls, by gaunt-looking and often dying hunger strikers.

Khalil Awawdeh, a 40-year-old Palestinian from a village near Al-Khalil (Hebron), is the latest prison hunger striker to make history, as he refrained from eating for 180 days. His weight dropped to 38 kg, having lost more than 40 kg while on hunger strike. The images of his half-naked, skeletal body were deemed “graphic” and “offensive” by some social media users and were removed as soon as they were shared. By the end of his protest, he could only whisper a few words. Though barely audible, they were filled with courage.

On Aug. 31, Awawdeh ended his hunger strike after reaching a deal with the Israeli prison administration to release him on Oct. 2. His first words after that agreement were not those of a dying man, but of a triumphant leader: “This resounding victory extends the series of great victories achieved by the mighty and honorable people of this nation.”

These words, however, were not unique. They carried the same sentiment communicated to me by every single freed prisoner I have interviewed in recent years. None have any regrets, even those who spent most of their lives in dark cells and in shackles; even those who lost loved ones; even those who left prison with chronic diseases, destined to die soon after their release. Their message is always one of defiance, courage and hope.

Awawdeh is not the first prisoner, nor will he be the last, to undergo a life-threatening hunger strike. The strategy may be explained, and understandably so, as a last resort or an act of desperation by individuals who are left without alternatives. But for Palestinians, these are acts of resistance that demonstrate the power of the Palestinian people: Even in prison, handcuffed to a hospital bed and denied every basic human right, a Palestinian can fight, and win. Awawdeh did.

When Saqr learned that his brother Nael was killed by the Israeli army in Gaza, he was a prisoner in Israel. He told me that the first thing he did when he learned of his brother’s death was to kneel down and pray. The following day, he spoke to the mourners in his Gaza refugee camp using a smuggled cellphone, telling them: “Ours is a long and painful march for freedom. Some of us are in prison; others are underground, but we will never cease our fight for our people. We must remain committed to the legacy of our forefathers and our martyrs. We are all brothers, in blood, in the struggle and in faith, so let’s remain united as one people, as brothers and sisters, and carry on, despite the heavy losses and tremendous sacrifices.”

Ramzy Baroud has been writing about the Middle East for more than 20 years. He is an internationally syndicated columnist, a media consultant, an author of several books, and the founder of PalestineChronicle.com. Twitter: @RamzyBaroud