The Nation runs a righwing religious endorsement of Zionism that opposes BDS and leaves out the forced expulsion of Palestinians from their land. 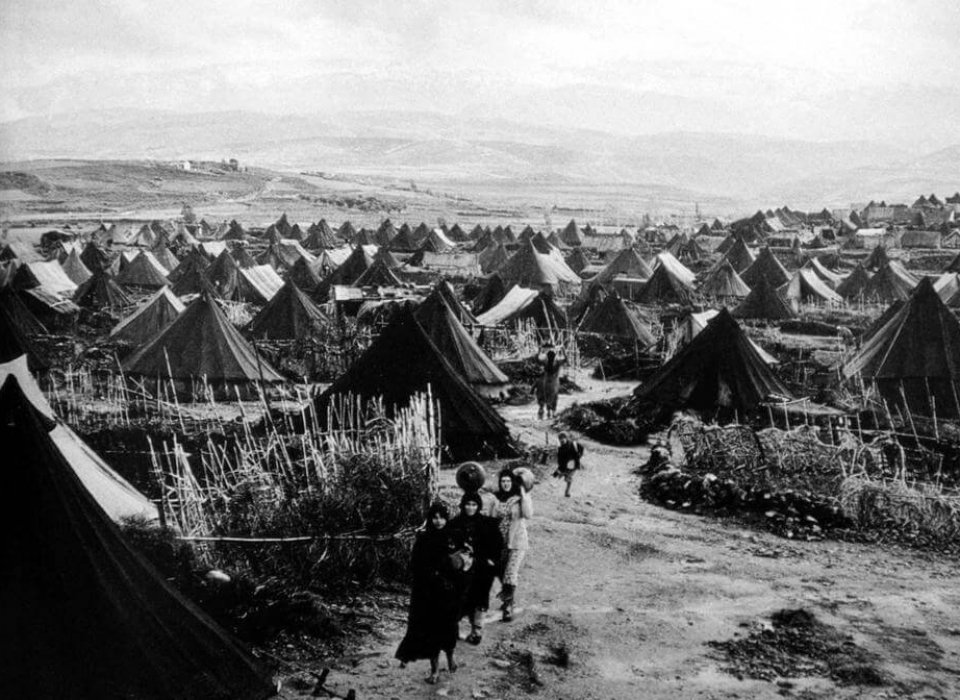 NAHR EL BARED CAMP IN LEBANON WAS ONE OF THE FIRST CAMPS ESTABLISHED TO SHELTER THE PALESTINE REFUGEES OF THE ARAB-ISRAELI CONFLICT IN 1948. THE SIX THOUSAND REFUGEES LIVED IN THE TENTS IN NAHR-EL BARED CAMP IN THE EARLY 1950S. LATER, TENTS WERE REPLACED BY CONCRETE HUTS. 1951. (PHOTO: UNRWA ARCHIVE/S.MADVER)

Important and dismaying: The Nation has run a full-throated defense of Zionism as a thousands-years-old Jewish connection to their land, and a project necessitated to this day by the threat to Jews from antisemitism. Jews suffer “oppression” and “discrimination” in the west, writes Alexis Grenell, a political consultant and columnist.

The article, “How the Left Alienates Jews,” is remarkable for several reasons. At a time when The Nation is giving a platform to Mohammed El-Kurd, the poet and Sheikh Jarrah activist, it is offering a sop to the diehard Jewish Zionist community which obviously is a big part of its New York liberal constituency, and likely its donor base too. Rightwing Zionists love this article.

The argument is also remarkable for its denial of the Palestinian experience in favor of Jewish fears. Grenell laments “the oppression of the Palestinian people,” but says progressives must not boycott Israel because boycott strikes “profoundly emotional chords” in Jews due to the Nazi boycotts. Those same emotional chords go back to mythological history and our “forced exile”, Grenell says: “in the Jewish liturgy ‘Am Yisrael’ refers to the ‘nation of Israel,’ often used interchangeably to mean the Jewish people, and our collective identity is inextricably bound up with centuries of forced exile from a historic homeland.”

So the recent Palestinian exile counts for nothing in this article against biblical “history” and fears, and anyone who doesn’t acknowledge that is “goysplaining” to Jews, she says.

This is the Jewish historical id talking: The left doesn’t understand how much Jews have to fear as an oppressed minority, Grenell says, so the left discounts the need for a Jewish state. No one should discount those fears. They are meaningful, and flight is a genuine response to persecution. But Israel is much less safe for Jews than the U.S., and the reason is because of ethnocentric attitudes like Grenell’s that erase the Palestinian experience.

She calls Palestinians an ethnic minority in the land, while saying that Jews are connected to the land from time immemorial, and the two state solution is a “compromise” for Jews–

a compromise position that reflects a historical reality dating back thousands of years, one that most self-described anti-Zionists seem uninterested in learning anything about.

There is no discussion of the Palestinian connection to that land, no understanding that the “two-state solution” for Palestinians has been an endless charade as the business of apartheid and ethnic cleansing go forward.

The article also erases anti-Zionist Jews. A recent survey says that 40 percent of young Jews see Israel as an apartheid state and 20 percent say it has no right to exist as a Jewish state. But Grenell works as hard as other Israel lobbyists do to equate Judaism and Zionism. Jewish voices should be “leading” the progressive discussion of Israel, and not BDS-supporters, because Jews don’t support BDS, she says.

“Surveys consistently show overwhelming opposition to BDS among American Jewry, including young people and those who identify as secular or ‘cultural’ Jews.”

I’m told the comments at The Nation are critical. Twitter is publishing derision.

“Is this a way to appease Zionists after giving mohammad elkurd a column in your paper? Bc it’s just ugly and gross,” 48Refugee writes. “A place can have religious significance without justifying war crimes, ethnic cleansing, occupation, and apartheid to support hostile take over and to maintain control over natives.” “I’m just confused as to how this person thinks they are qualified to talk in broad strokes about two things with widely divergent ideas and experiences: ‘Jews’ and ‘the left’ cannot be reduced to one parochial viewpoint.”– Vilde Chayeh. “Drivel,” and not worthy of the Nation, says Alex Kane of Jewish Currents. “A despicable hit piece on DSA that the Nation should be ashamed of having published” — Nathan J. Robinson. “Zionism is white supremacy. What does that make you?” — Yoav Litvin.

My own criticism is that the article denies Jewish power in the U.S. In describing antisemitic violence, Grenell accuses the left of mysticism about Jewish media and political power. She puts the “Zionist lobby” in quotes as if this is a conspiracy theory and not the lived reality of foreign policy that even the New York Times acknowledges; and says that the Democratic coalition relies on Jewish voters when plainly the Jewish presence in the Democratic Party is far more than voters: we make up much of the professional class of the party, and are the biggest donors too, and among the leading media figures. And meantime the Republicans out-Israel one another to get Miriam Adelson’s millions.