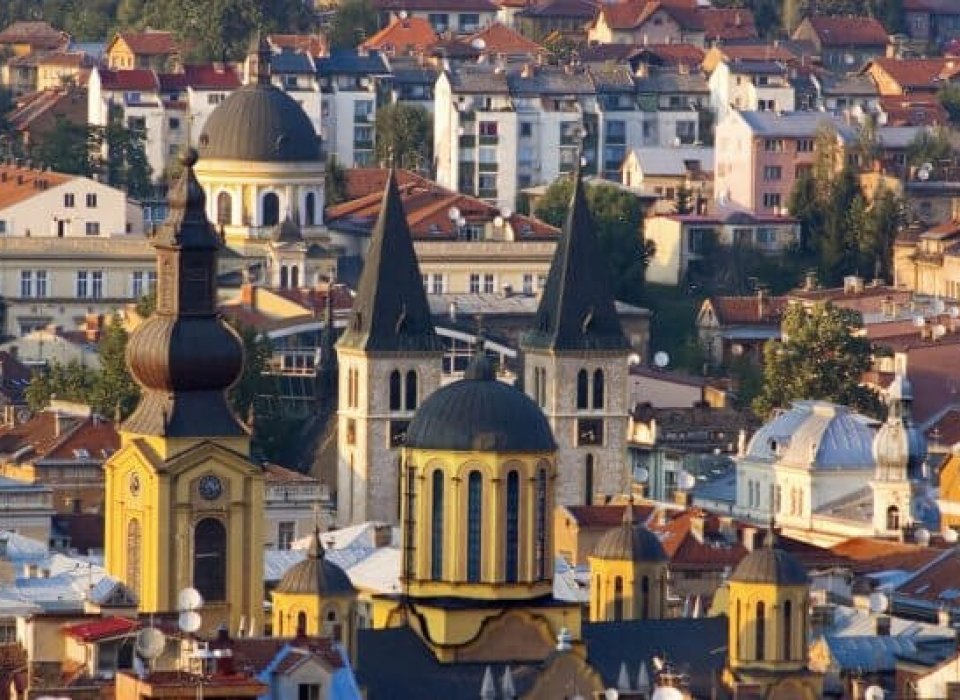 Sarajevo was the first European city to have a Catholic Church, Jewish Synagogue, Orthodox Church, and Islamic Mosque in the same neighborhood

A light on my path.

1. I thank Your Excellencies for the kind welcome and cordial words the President has extended to me on your behalf. I offer you and your families my respectful greeting to strengthen peace and civil harmony in Bosnia-Hercegovina.

In this region, for many centuries East and West have met and not infrequently come into conflict. For a long time, there has been the experience of the coexistence of different cultures. It has enriched the region with its values. In Bosnia-Hercegovina, there live side by side with the South Slavs, united in common ancestry though divided by history. In this capital city, Sarajevo, you have witnessed in your past the rise of the Catholic cathedral, the Orthodox cathedral, the Muslim mosque, and the Jewish synagogue. These four edifices are not only the places where believers in the one God profess their faith. They are also a visible sign of the kind of civil society that the people of this region wish to build.

The tensions which can develop between individuals and ethnic groups as an inheritance from the past and as a consequence of proximity and diversity ought to find in religious values reasons for moderation and restraint. The goal is to understand with a view to constructive cooperation.

2. I have had to affirm - and repeat it here today - that Sarajevo, a city at the crossroads of the tensions between cultures, religions, and different peoples, can be considered the city is symbolizing our century. Precisely here, the First World War began in 1914. Here, the violence of the Second World War was unleashed in all its fury. Finally, in the century's closing decade, its people have experienced interminable years of fear and anguish amidst destruction and death.

After so much suffering, Bosnia-Hercegovina is finally committed to building peace. This is not an easy undertaking, as the experience of the months since the end of the conflict has shown. Nevertheless, with the help of the International Community, peace is possible. Indeed peace is necessary. From a historical perspective, Sarajevo and the whole of Bosnia- Hercegovina, if they succeed in setting up their institutional structure in harmony, can become, at the end of this century, an example of coexistence in diversity for many nations experiencing this same difficulty in Europe and elsewhere in the world.

3. The method which must be rigorously followed in solving the problems which arise along the arduous path is the method of dialogue, inspired by listening to the other side and mutual respect. The process, which, despite cases of resistance, is being increasingly acknowledged, requires of those taking part, frankness, courage, patience, and perseverance. The effort needed by face-to-face encounters will be richly rewarded. It will slowly become possible for the wounds inflicted by the recent terrible war to heal, and real hope for a more worthy future for all the people who live in this territory will become possible.

Dialogue must be conducted with respect for equality of rights, guaranteed to individual citizens by appropriate legal means, without preference or discrimination. An urgent effort must be made to ensure that everyone can be guaranteed work, which is the basis of recovery and development while respecting human dignity. An effort must be made to ensure that the exiles and refugees, in whatever part of Bosnia-Hercegovina, can exercise the right to recover the homes they had to abandon in the turmoil of the conflict.

Equality of rights must be granted to ethnic-religious communities. Bosnia-Hercegovina is a mosaic of cultures, religions, and ethnic groups which, if recognized and safeguarded in their diversity, can contribute their respective gifts to enrich the one patrimony of civil society.

4. Building true and lasting peace is a significant task entrusted to everyone. Indeed, much depends on those who have public responsibilities. But the future of peace, while primarily designated to institutional formulations, which have to be effectively drawn up utilizing sincere dialogue and respect for justice, depends no less decisively on a renewed solidarity of minds and hearts. This interior attitude must be fostered within the frontiers of Bosnia-Hercegovina and in relations with neighboring States and the Community of Nations. But an attitude of this kind can only be established on the foundation of forgiveness. For the tower of peace to be solid against blood and hatred, it must be built on the courage of forgiveness. People must know how to ask for forgiveness and to forgive!

Despite the difficulties, obstacles, and hindrances, let hope never fail! God does not abandon peacemakers.

I implore him, the almighty Lord of the universe, to grant everyone his consolation and to strengthen generous resolutions of sincere dialogue, proper understanding, and mutual commitment to reconstruction and peace in people's hearts.

Apostolic Journey of His Holiness John Paul II to Sarajevo (April 12-13, 1997), Address of The Holy Father to the Political Leaders Of Bosnia-Hercegovina, 13 April 1997