“Cain rose against his brother Abel and killed him” (Genesis 4: 8) s

The Vatican, Saint Peter’s Basilica, 25 March 1995 | This first murder is presented on a page in Genesis with universal significance. It is a page rewritten daily in the book of human history, with inexorable and degrading frequency,

Cain was “outraged,” and his countenance “fell” because “the Lord had regard for Abel and his offering” (Genesis 4: 4-5). The biblical text does not reveal the reason why God prefers Abel’s sacrifice to Cain’s. However, it clearly shows that God, although preferring Abel’s gift, does not interrupt his dialogue with Cain.

God admonishes Cain, reminding him of his freedom in the face of evil.  Man is in no way predestined to evil. Like Adam, he is tempted by the evil force of sin, which, like a wild beast, lies in wait at the door of his heart, ready to leap on its prey.

But Cain remains free in the face of sin. He can and must overcome it: “Its desire is for you, but you must master it” (Genesis 4: 7).

Envy and anger have the upper hand over the Lord’s warning. So, Cain attacks his brother and kills him. Man has become the enemy of his fellow man. Cain’s killing of his brother at the very dawn of history is thus a sad witness of how evil spreads with astonishing speed. Man’s revolt against God in the earthly paradise is followed by the deadly combat of man against man. Brother kills brother. Like the first fratricide, every murder violates the “spiritual” kinship uniting humanity in one great family, in which all share the same fundamental good: equal personal dignity.

After the crime, God intervenes to avenge the one killed. Before God, who asks him about the fate of Abel, Cain, instead of showing remorse and apologizing, arrogantly eludes the question:

“I do not know:” Cain tries to cover up his crime with a lie. This was the case when ideologies try to justify and disguise the most atrocious crimes against human beings. “Am I my brother’s keeper?”:

Cain does not wish to think about his brother and refuses to accept every person’s responsibility towards others. We cannot but think of today’s tendency to deny responsibility for their brothers and sisters. Symptoms of this trend include the lack of solidarity towards society’s weakest members-such as the elderly, the infirm, immigrants, children- and the indifference frequently found in relations between the world’s peoples even when fundamental values such as survival and freedom, and peace are involved.

Cain is cursed by God and earth, which will deny him its fruit (Genesis 4: 11-12). He is punished: he will live in the wilderness and the desert. Murderous violence profoundly changes man’s environment.

From being the “garden of Eden” (Genesis 2: 15), a place of plenty, of harmonious interpersonal relationships, and of friendship with God, the earth becomes “the land of Nod” (Genesis 4: 16), a place of scarcity, loneliness, and separation from God. Cain will be “a fugitive and a wanderer on the earth” (Gen 4:14): uncertainty and restlessness will follow him forever.

And yet God, who is always merciful even when he punishes, “put a mark on Cain, lest any who came upon him should kill him” (Genesis 4: 15). He thus gave him a distinctive sign, not to condemn him to the hatred of others, but to protect and defend him from those wishing to kill him, even out of a desire to avenge Abel’s death. Not even a murderer loses his dignity, and God himself pledges to guarantee this. And it is precisely here that the paradoxical mystery of the merciful justice of God is shown forth.

God drove Cain out of his presence and sent him into exile far away from his native land. Cain passed from a life of human kindness to one which was more akin to the rude existence of a wild beast. God preferred the correction rather than the death of a sinner. God did not desire that a homicide be punished by the exaction of another act of homicide.”

The Lord’s question: “What have you done?”, which Cain cannot escape, is also addressed to the people of today, to make them realize the extent and gravity of the attacks against life which continue to mark human history; to make them discover what causes these attacks and feeds them; to make them ponder seriously the consequences which derive from these attacks for the existence of individuals and peoples.

Read more: ‘Bennett Says No Palestinian State Under His Watch.’ Source: Jews for Justice for Palestinians.

IOANNES PAULUS PP. II, EVANGELIUM VITAE, To the Bishops, Priests, and Deacons, Men and Women Religious, lay Faithful, and all People of Good Will on the Value and Inviolability of Human Life. Given in Rome, at Saint Peter’s, on 25 March, the Solemnity of 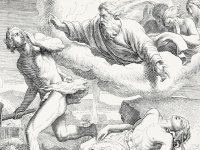