Late last month, the US House of Representatives’ Foreign Affairs Committee approved the latest version of the Israel Anti-Boycott Act, which is now one step closer to becoming law. The bill was introduced to Congress in March 2017, with the aim of prohibiting American companies from assisting international governmental organisations with boycotts against Israel. 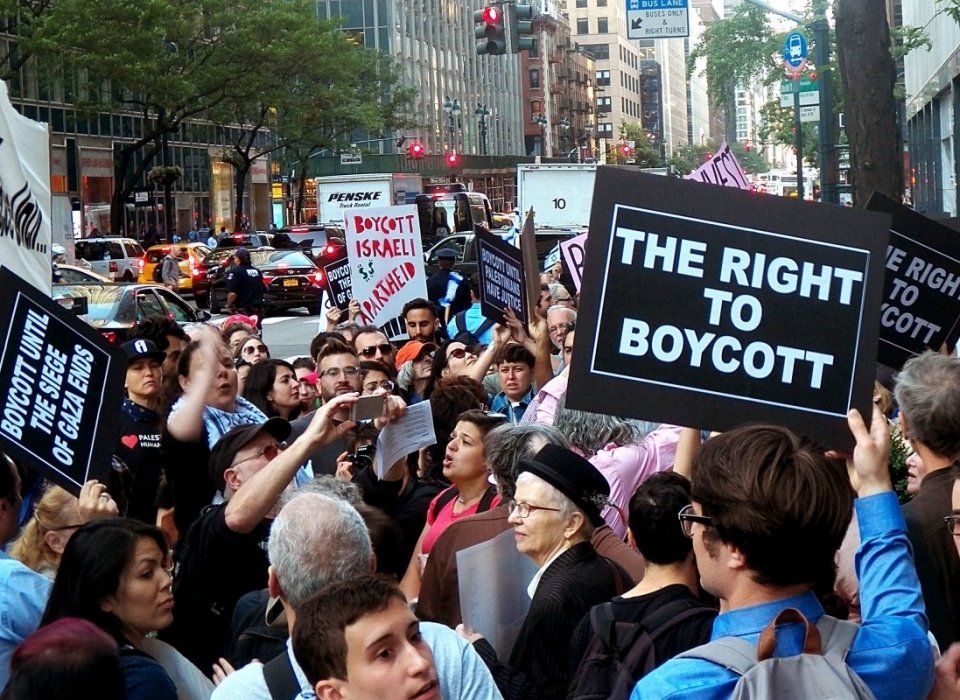 These organisations include the UN, whose high commissioner for human rights was tasked two years ago with drawing up a database of companies doing business in the illegal settlements in the Occupied Palestinian Territory, and the EU, whose trade regulations discourage business with settlements but fall short of prohibiting it. Even an individual in the US who supplies information about infringing companies to these bodies could be liable to a civil fine of up to $250,000, or a criminal penalty of up to $1 million. The original version of the bill, which was amended after considerable pressure from civil society groups, would also have imposed prison sentences of up to twenty years.

The Israel Anti-Boycott Act, which enjoys the support of more than half the members of both chambers of Congress, is part of a wave of US legislation aiming to counter the Palestinian-led Boycott, Divestment and Sanctions movement (BDS). Twenty-five state legislatures have enacted some form of anti-BDS law, with more bills being considered in all fifty states and at the federal level. State governors are currently considering whether or not to issue executive orders that prohibit state agencies from entering into contracts with companies and institutions – including universities, which led the way during the anti-apartheid boycott in the 1980s – that are involved in boycotts of Israel. Maryland, Louisiana, Wisconsin and New York have already issued such orders. After signing his, in June 2016, Andrew Cuomo declared in the Washington Post: ‘If you boycott Israel, New York will boycott you.’ It isn’t just that those who participate in or help enable boycotts are boycotted themselves, or criminalised; people with no connection to activism are also caught up in ludicrously punitive interpretations of the law. After Hurricane Harvey hit Texas last year, residents in the city of Dickinson had to declare – as a condition for receiving relief grants – that they did not or would not boycott Israel.

In the US, boycotts are supposed to be protected under First Amendment rights of petition and free speech, which are supported by Supreme Court jurisprudence that dates back to 1982, when the court ruled that a boycott of white-owned businesses in Mississippi led by the NAACP was a non-violent act that legitimately sought to bring about ‘political, social and economic change’. Many of the new laws against BDS are therefore clearly unconstitutional. The ACLU is currently suing the state of Arizona for its treatment of Mikkel Jordahl, an attorney who wasn’t allowed to give legal advice to prisoners in a local jail until he signed a document saying that he wasn’t engaged in a boycott of Israel. In Kansas, a federal judge issued an injunction against the state’s anti-BDS law after Esther Koontz, a schoolteacher, refused to sign a similar declaration as a condition of taking a new job. Following that case, Kansas has revised its legislation – the anti-boycott rule will now apply only to contracts worth $100,000 or more, thus exempting a teacher like Koontz – but hasn’t repealed it.

In the familiar tradition of American lawmaking, legislation like this is often provided ready-made to state legislatures by lobbyists and advocacy groups, which have succeeded in instituting very similar rules against boycotts of Israel across the United States, with minor tweaks to the wording here and there. In a number of states, public pension funds are required to divest from any company that appears on a blacklist of those said to be involved in a boycott. In Colorado these are referred to as ‘restricted companies’, in Indiana they’re ‘restricted businesses’, in Florida, Iowa and Nevada they’re ‘scrutinised companies’: in each case, the procedure is identical. It’s clear that the rush to lobby lawmakers over the last few years has been part of a strategy by pro-Israel advocates to take the fight where it can most easily be won. At a conference on combating BDS held in Los Angeles in 2016, delegates pointed out that the support for BDS on college campuses made universities the wrong place to have the argument. ‘You don’t want to fight on your enemy’s terrain,’ said Noah Pollak, executive director of the Emergency Committee for Israel. ‘The enemy picked out campuses for a reason.’ Moving the fight to the legislatures, he suggested, sent out a message that would demoralise BDS campaigners: ‘While you were doing your campus antics, the grown-ups were in the state legislatures passing laws that make your cause improbable.’ A key architect of this strategy, Kenneth Marcus, who participated in the same conference, was confirmed last month as an assistant secretary for civil rights in Betsy DeVos’s Department of Education.

A similar campaign against BDS has been waged around the world. In France, BDS activists have been convicted and the bank accounts of BDS groups shut down, following a 2015 ruling by the Court of Cassation upholding the conviction on grounds of incitement to hatred of 14 BDS activists who entered a supermarket wearing ‘Boycott Israel’ T-shirts and handed out flyers that read: ‘Buying Israeli products means legitimising crimes in Gaza.’ BDS-affiliated accounts have been closed by banks in Germany too. In the UK, the legal battle has been going through the courts. In 2016, Sajid Javid’s Department for Communities and Local Government issued statutory guidance which held that local councils must not use ‘pension policies to pursue boycott, divestment and sanctions (“BDS”) policies against foreign nations … other than where formal legal sanctions, embargoes and restrictions have been put in place by the government’. Last summer, a judicial review found that in dictating where councils could and couldn’t invest their pension funds – and banning BDS – the secretary of state had ‘acted for an unauthorised purpose and therefore unlawfully’. A year later, that decision was overturned by the Court of Appeal: councils are once again prohibited from participating in boycotts. Except, it seems, when they aren’t: just this month, the same court dismissed proceedings brought by Jewish Human Rights Watch against Leicester City Council, after it voted to support a boycott on goods from settlements in the West Bank because of Israel’s ‘continuing illegal occupation’ of Palestinian territory. So recent legal judgments are inconsistent, but the UK government is still arguing that local government boycotts against Israeli settlements should be prohibited because they contradict national policy.

History should have alerted Palestinians and their supporters to expect reprisals. The Swadeshi movement’s boycott of British goods in India, led by Gandhi, was met with brutal violence and divide-and-rule tactics by the colonial power. When European and American Jewish organisations called for an economic boycott of Nazi Germany in the 1930s, the Reich launched a counter-boycott of Jewish businesses and intensified antisemitic persecution. Black Americans who joined the Montgomery Bus Boycott in 1955-56 were harassed, arrested and beaten by state and law enforcement authorities, and scores of civil rights leaders were criminally indicted. Farm workers who participated in the Delano Grape Strike in California in the 1960s were assaulted by company-hired thugs when they voted to unionise. Performers and activists who called for boycotts and sanctions of apartheid South Africa were blacklisted and targeted by Pretoria’s intelligence services. For decades, Palestinian civil disobedience on the ground has been crushed by the Israel Defence Forces. No act of non-violence ever goes unpunished.

Israel insists that the Palestinian cause can’t be included in the venerable history of boycotts. Writing in the New York Times in January, Naftali Bennett, Israel’s education minister, defended a new law that bars activists from entering Israel if they’re suspected of supporting BDS; twenty organisations – including War on Want, Jewish Voice for Peace and the American Friends Service Committee – were subsequently blacklisted. Claiming that BDS was an example of an ‘age-old strategy’ aimed at demonising the Jewish people and eliminating the Jewish state, Bennett insisted that other democratic countries have similar procedures to stop ‘enemy soldiers’ crossing their borders – including the US, whose I-94W form asks visitors if they are involved in espionage or have criminal records. By portraying non-violent activism as a matter of national security, Israeli officials hope to quell worries about compromising civil liberties.

Arguments about the legitimacy of these policies have been put to the Israeli judiciary too. In 2015, the Supreme Court in Jerusalem examined Israel’s own anti-boycott law after a coalition of human rights organisations and activists argued that it was a violation of civil rights aimed at stifling political dissent. In its final judgment, the court approved the law in a 5-4 ruling. The legislation allows Israeli citizens to sue anyone calling for a boycott of ‘a person, or other entity, solely because of their affiliation with the State of Israel, one of its institutions, or an area under its control, in such a way that may cause economic, cultural or academic harm’ (the first such lawsuit was filed in January against two activists in New Zealand who had written an open letter that persuaded the singer Lorde to cancel a concert in Tel Aviv). In their ruling the Supreme Court judges admitted that the law violated freedom of expression. But they held that this violation was reasonable and proportionate because the law was pursuing a ‘worthy aim’: to protect Israelis from the ‘discrimination’ of boycotts, and to ‘prevent harm to Israel’s standing in the world’. Justice Hanan Melcer, who wrote the leading opinion for the majority, argued that boycotts could be considered a form of ‘political terror’. Justice Elyakim Rubinstein, citing biblical texts and Jewish history, wrote that ‘there is nothing wrong in anchoring laws passed by the Knesset in the struggle against those who wish to annihilate us.’ Justice Yitzhak Amit, who suggested that BDS could stand for ‘Bigoted, Dishonest and Shameful’, declared that ‘there is something Orwellian in the petitioners’ claim that the law restricts freedom of speech.’ Boycotts, he said, were not a product of free expression but a means of silencing it, ‘to make one opinion and one “truth”’. That seemed quite rich, coming from someone laying down the law about the one truth acceptable to the state.

These assertions from the highest echelons of Israel’s government and judiciary are quite revealing about the threat BDS is felt to pose – particularly to the settlement enterprise, which officials see today as integral to Israel’s national sovereignty. Jewish activists are joining boycotts alongside Palestinians and other allies. Student unions, churches and academic institutions worldwide are voting to dissociate themselves from Israeli companies involved in the occupation. Parliamentarians are proposing stronger regulations to exclude the settlements from Europe’s trade with Israel. There is a simple reason for the Israeli government’s vast investment in undermining the right to boycott: BDS is working. But it’s vital that the right is protected. The three tenets of the BDS movement – to end an occupation, to achieve equal rights and to repatriate refugees – shouldn’t be controversial. To believe that they threaten the existence of the ‘Jewish state’ is to admit that the state is inherently antithetical to those values. Palestinians can’t be denounced on the one hand when they resort to violence, and on the other when they pursue the only non-violent means still available to them. 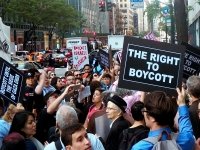