The American Jewish establishment, which has wrongly and perniciously attacked Jimmy Carter as an intransigent foe of Israel and even a Jew-hater, needs to start apologizing. Call it atonement 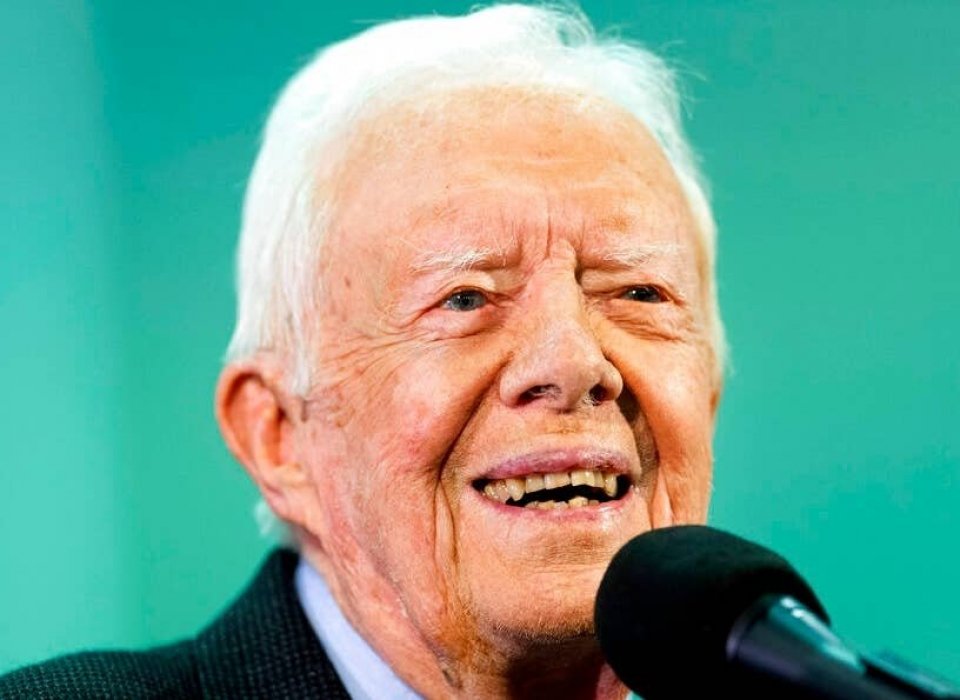 Former President Jimmy Carter two years ago: 'The antisemite label is simply an outrage, a slander against the most decent man to have occupied the Oval Office in the 20th century'Credit: AP

In America and abroad, Carter is often feted as the very model of an ex-president. But among many American Jews, he is sometimes openly accused of being intransigently anti-Israel or, worse, an antisemite. The latter label is simply an outrage, a slander against the most decent man to have occupied the Oval Office in the 20th century.

Carter’s whole life is proof of his stellar personal ethics and dedication to liberal humanitarian principles. A born-again Christian, reared in segregated, white supremacist South Georgia, he has never displayed a shred of racial or religious prejudice.

Incidentally, during his one-term presidency, some of his closest aides were prominent Jewish Americans, including Stuart Eizenstat, Gerald Rafshoon, Robert Lipshutz, Al Moses and David Rubenstein. He surrounded himself with Jews — and not to score performative points or as a shield either.

U.S. President Jimmy Carter waves from his car along the parade route through Bardstown, Kentucky in 1979Credit: BOB DAUGHERTY,AP

So why the persistent slander? The answer, of course, is Israel, not the Jews.

Carter’s problems began during his first year in office, when he made it clear that he was willing to sacrifice political capital in an effort to tackle the thorny problem of Arab-Israeli peace. That spring he became the first U.S. president to mention the need for a "Palestinian homeland."

And then he offended the American Jewish establishment by trying to pressure Israel to attend peace talks at Geneva that would also include the Soviet Union. The resulting impasse inspired Anwar Sadat to make his historic trip to Jerusalem on November 19, 1977.

Earlier that month, the New York Times published an editorial headlined, "The Jews and Jimmy Carter," in which the editorialists observed "that most leaders of the Jewish community are acting as if President Carter is risking Israel’s survival for an illusory Middle East settlement."

Rabbi Alexander Schindler, then the president of the Union of American Hebrew Congregations, now the Union for Reform Judaism, America’s largest Jewish stream, said he was "appalled" by Carter’s effort to strong-arm Israel’s Menachem Begin.

Rabbi Schindler should have been a political ally of Carter’s. A social and political liberal, Schindler understood that Carter was trying to broker a real peace. But he was also very wary of being seen as an ally of a president trying to pressure Israel.

President Carter reaches out to greet pro-Palestinian protesters outside Newcastle City Hall during a 1977 visit. The sign at right reads: ‘Peace will be born in a secular democratic Palestine’Credit: AP

Invited to a small White House dinner in the spring of 1978 with eight other Jewish American leaders, Schindler listened with growing unease as Carter talked about "the relative flexibility of [Anwar] Sadat’s position and the intransigence of Israel." Carter flatly explained that the "illegal settlements" in the West Bank were the primary obstacle to a breakthrough in the talks.

Carter, though, thought the other Jewish leaders he’d invited over were on board: "With the exception of Alex Schindler," he noted in his presidential diary, "who always acts like an ass, the rest of them were constructive."

Schindler, for his part, came away from the dinner convinced that Carter was beginning to orchestrate a campaign against Israel’s Prime Minister Begin: "I didn’t want Jimmy Carter to bamboozle the Jewish community the way FDR had."

What Schindler had in mind was Roosevelt’s less than adequate response to the private, but ineffective, pleas of high-profile Jewish leaders during World War II, such as Rabbi Stephen Wise, to do something to rescue European Jewry.

Carter was indeed trying to recruit Jewish American leaders like Rabbi Schindler to put pressure on the Israelis to stop building settlements. Carter thought this was only reasonable — and, by the way, in Israel’s long-term interest. He didn’t realize that he was asking the rabbis to touch a third rail.

"And then along comes Menachem Begin, and here you had the president trying to get the Israeli government to do things that they did not want to do — like stop the settlements. Now, I think Carter was right, but many in the Jewish community came to believe that Carter was just anti-Israel."

Six months after Schindler’s run-in with Carter over West Bank settlements, the president invited Sadat and Begin to Camp David for 13 momentous days, in early September 1978. The result was the Camp David accords that led, the next spring, to an Israeli-Egyptian peace treaty. Carter had performed a diplomatic miracle, taking Egypt off the battlefield for Israel. It would not have happened without Carter’s personal involvement. That peace treaty still stands.

And yet the Jewish American establishment continued to complain about this president. Why? Because he had insisted at the time that Begin sign a side-letter to the accords, pledging to honor a five-year freeze on any new settlements in the West Bank.

But the side-letter went unsigned and, within days, Begin was talking about building new settlements. In Carter’s view, the Israeli prime minister had either deceived him – or straight out lied to him.

This misunderstanding was no small thing. When Carter became president in 1977, there were only about 5,000 Jewish settlers in the occupied West Bank. And when he left in 1981 there were still less than 24,000 settlers. Today that number has grown to about 700,000, including the Jewish settlements in Arab East Jerusalem, which it occupied in 1967 and formally, and illegally, annexed in 1980.

For the next 40 years, Carter insisted that Israel’s settlements were the key obstacle to peace. They were poisoning his greatest diplomatic triumph. His relentlessness on this issue has disturbed, but also embarrassed, American Jewish leaders.

Former U.S. president, Jimmy Carter visits a weekly protest in the East Jerusalem neighborhood of Sheikh Jarrah against the eviction of Palestinians from their homes Credit: AP

In 2006 he published a best-selling book with the provocative title, "Palestine: Peace Not Apartheid." The book was written as yet another warning that Israel could become a less than democratic Jewish state if it could not find a way to end the occupation of Palestinian territories.

In the eyes of many Jewish Americans, this was a former president interfering in the decisions of Israeli leaders to do what they thought was necessary for Israeli security. From there, it was a short path to accusing him of being a "Jew-hater," as Marty Peretz, then editor-in-chief of the weekly The New Republic, characterized him.

They were wrong and Jimmy Carter was right. The former president’s decision to use the word ‘apartheid’ no longer seems a stretch; indeed, today it seems to describe the reality on the ground in the occupied West Bank.

I don’t think Carter has a Jewish problem. It’s just the reverse. The American Jewish establishment has a Jimmy Carter problem. And in his twilight years, with his 97th birthday coming up on on October 1st, they probably owe him an apology.

Kai Bird is a Pulitzer Prize-winning historian and the author most recently of "The Outlier: The Unfinished Presidency of Jimmy Carter." Twitter: @Kaibird123