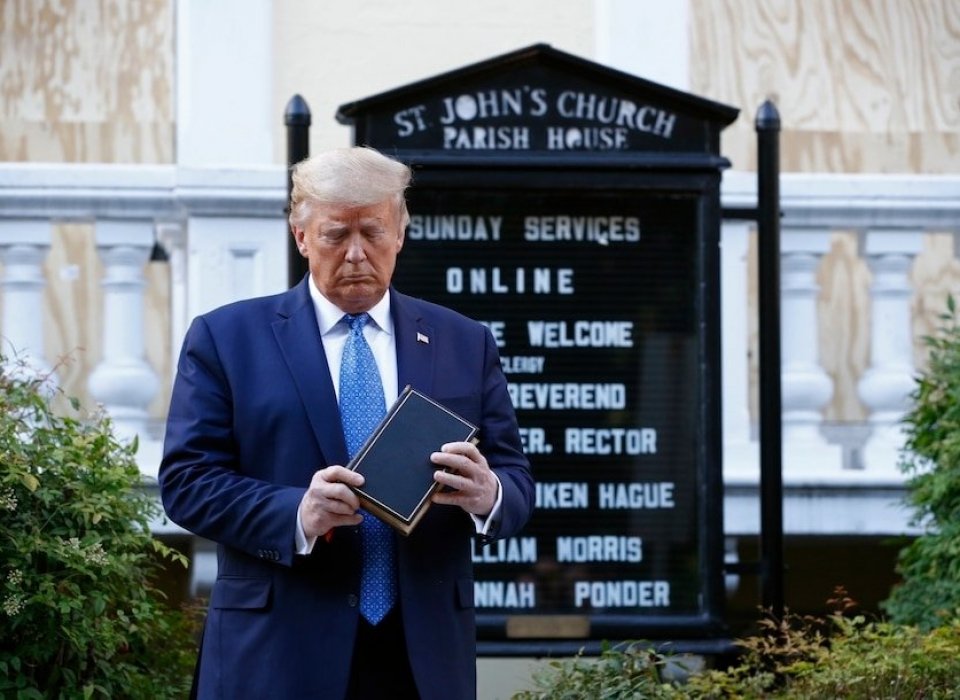 President Donald Trump holds a Bible during a visit outside St. John's Church across Lafayette Park from the White House on June 1, 2020. (Patrick Semansky/AP)

Much has been written about White evangelicals’ central role in the fraying of democracy. More attention, however, should be paid to the damage the political movement has inflicted on religion itself.

The demographic — which remains in the throes of White grievance and an apocalyptic vision that postulates America (indeed “Western civilization”) is under attack from socialists, foreigners and secularists — forms the core of the MAGA movement. Many have rejected the sanctity of elections, the principle of inclusion and even objective reality.

The consequences have been dire for American politics. The siege mentality has morphed into an ends-justify-the-means style of politics in which lies, brutal discourse and even violence are applauded as necessary to protect “real America.” Essential features of democracy, such as the peaceful transfer of power, compromise with political opponents and defining America as an idea and not a racial or religious identity, have fallen by the wayside.

Sadly, the degradation of democracy has intensified in the wake of Joe Biden’s victory. The doctrinal elevation of the “big lie," the increase in violent rhetoric and the effort to rig elections all reflect a heightened desperation by the MAGA crowd. This has driven the GOP to new lows (e.g., vaccine refusal to “own the libs,” virtually all House Republicans defending an animation depicting the murder of a congresswoman).

While lovers of democracy around the world view these developments in horror, we should not lose track of the damage the MAGA movement has wrought to religious values. Peter Wehner, an evangelical Christian and former adviser to President George W. Bush, explains in a column for the Atlantic how a recent speech from Donald Trump Jr. reflects the inversion of religious faith. “The former president’s son,” Wehner writes, “has a message for the tens of millions of evangelicals who form the energized base of the GOP: the scriptures are essentially a manual for suckers. The teachings of Jesus have ‘gotten us nothing.’ ”

It’s worse than that, really; the ethic of Jesus has gotten in the way of successfully prosecuting the culture wars against the left. If the ethic of Jesus encourages sensibilities that might cause people in politics to act a little less brutally, a bit more civilly, with a touch more grace? Then it needs to go. Decency is for suckers.

Understanding this phenomenon goes a long way toward explaining the MAGA crowd’s very unreligious cruelty toward immigrants, its selfish refusal to vaccinate to protect the most vulnerable and its veneration of a vulgar, misogynistic cult leader. If you wonder how so many “people of faith” can behave in such ways, understand that their “faith” has become hostile to traditional religious values such as kindness, empathy, self-restraint, grace, honesty and humility.

Robert P. Jones, who leads the Public Religion Research Institute, writes that “in the upside-down world white evangelicalism has become, the willingness to act in self-sacrificial ways for the sake of vulnerable others — even amid a global pandemic — has become rare, even antithetical, to an aggressive, rights-asserting white Christian culture.” The result is reckless self-indulgence that places some evangelicals’ own aversion to “being told what to do” ahead of the health and lives of vulnerable populations.

White evangelicals remain the most vaccine resistant of any major religious group, with one quarter (25%) refusing vaccination (compared to only 13% of the country). And these refusal rates are not all tied to theological objections. Only 13% of white evangelicals say the teachings of their religion prohibit receiving a vaccine, a rate comparable to the general public (10%).

Strikingly, the evidence suggests churches and pastors are the heart of the problem. White evangelicals who attend religious services regularly are twice as likely as less frequent attenders to be vaccine refusers (30% vs. 15%). If ever there were clear evidence of a massive abdication of pastoral responsibility and leadership, this is it.

As self-identified evangelicals reject small inconveniences and show disdain for others’ lives, Jones observes, “there is no hint of awareness that their actions are a mockery of the central biblical injunction to care for the orphan, the widow, the stranger, and the vulnerable among us.”

In sum, while the White evangelical political movement has done immeasurable damage to our democracy, its descent into MAGA politics, conspiratorial thinking and cult worship has had catastrophic results for the religious values evangelicals once held dear. Jones writes: “It’s important to say this straight. This refusal to act to protect the vulnerable — particularly because of the low personal costs involved — is raw, callous selfishness. Exhibited by people I love, it is heartbreaking. Expressed by people who claim to be followers of Jesus, it is maddening.”

If these trends continue uninterrupted, we will wind up with a country rooted in neither democratic principles nor religious values. That would be a mean, violent and intolerant future few of us would want to experience.

Jennifer Rubin
Jennifer Rubin writes reported opinion for The Washington Post. She is the author of “Resistance: How Women Saved Democracy from Donald Trump.”