Netanyahu should have assured Israel that the country is more important than any person's job; instead, he is perverting the rule of law

“These are the things you are to do: Speak the truth to each other, and render true and sound judgment in your courts” (Zachary 8:16).

Yesterday was a difficult day for the State of Israel. And a sad day for me, personally.

I spent 38 years in uniform, fighting for this country.  I went into politics because I care about the course that this country is taking. And I am pained to see it being led by an individual who is willing to jeopardize the fundamentals of civil society that we all take for granted, namely: equality before law.

I never could have imagined that the day would come when the prime minister of Israel would show such blatant disregard for our country’s justice system and refuse to appear in court. It is inconceivable to me that the prime minister would be so careless with regard to the future of the State of Israel and show concern for himself and him alone. But now we know exactly what we’re fighting for.

Netanyahu knows he is guilty. Otherwise, there is simply no explanation for his behavior, which has been consistently driven by the sole objective of avoiding trial.

The choice is crystal-clear.

We will either live in the Republic of Netanyahu or in the State of Israel.

We cannot overstate the significance of what has transpired. Netanyahu’s move toward securing parliamentary immunity for himself is not merely a technical question or a stop-gap measure that we can overlook. Blue and White, under my leadership, will do everything in our power to prevent immunity being granted to a criminal defendant, including creating a special Knesset committee.

Netanyahu has been charged with accepting bribery, and is already guilty of taking the State of Israel and the Israeli people hostage in his legal battles. He has dragged us into elections three times over the course of a year, which has cost the taxpayers billions of shekels. In practice, funds that could have gone to our overcrowded hospitals, to impoverished Holocaust survivors and to our schools are instead being diverted toward yet another round of elections.

Sadly, while you were all waiting on line for your flu shots, Netanyahu was busy consulting with his team of lawyers.

Yes, there are instances where immunity is a logically sound measure, reserved for instances when elected leaders need to be afforded protection from special interests. That’s not the case.

Parliamentary immunity is designed to serve Israel’s citizens. It is intended to enable elected officials to perform without the threat of blackmail or libel suits. It was never intended as a way to escape trial for criminal offenses. One of our first moves in office will be to modify the parliamentary immunity law to reflect this simple fact. We will put forward legislation to limit the number of terms in office for Israeli prime ministers as a bulwark against the type of corruption we see in the current government.

My personal pledge to you is that when the elections are over, we will address the things that really matter. Our citizens’ sense of security will come first, not the prime minister’s sense of personal security in office. Israel’s foreign relations will come first, not the prime minister’s public relations. We will transform Israel into a true global educational leader, not a leader in educational achievement gaps.

I would like to make a personal appeal to all of my fellow citizens who have voted Likud in the past: You are law-abiding people, an integral part of our country. You contribute to this country: in the military, as tax-paying citizens, as good people who make our country richer and stronger. You love your country, are deeply patriotic, and want only the best for it. Naturally, you expect the country honor you and acknowledge your needs, just the way you honor it. You would like to see your children grow up here happily, and dream of your grandchildren making their homes here as well. Many of you grew up steeped in the legacy of Jabotinsky and Begin. Naturally justice, integrity and the common values we share as a people and as a society are deeply important to you. But a parliament that confers immunity to someone facing charges of bribery and places them above the law, is a house whose basic foundations have been eroded. It will not stand the test of time. This is not your path.

I pose a similar question to Likud officials as well: Did you go into politics so that you could serve as human shields for a leader charged with bribery? And what about the “obstructionist bloc” members, Naftali, Ayelet, Rabbi Arye, Rabbi Raffi, what will you tell your children about this moment in time, when you were called upon to model responsible leadership?

I feel personal regret for Netanyahu’s predicament. I have known him for many years. And I held him in high regard as a prime minister, even though I did not always share his opinions. He has done a great deal for this country. But it has, sadly, all come to this. Netanyahu’s sole concern at present is for himself.

Netanyahu, what you should have done was to look the Israeli people in the eye, and tell them you would fight for your innocence, assure them that this country is greater and more important to you than your title, even at the painful cost of retiring from political life, even at the cost of bearing the consequences legally.

Instead, you are choosing to manipulate the basic rules of the game, pervert the process, and cling to your job. We will not allow that to happen.

I will win. We will win. And I will be everyone’s prime minister, regardless of whether they voted for me or not. Yes, there are divisions among us, but the most pressing division at this moment is the one between a leader who is concerned solely with his own personal interests and the challengers facing him who place the Israeli people first.

After the upcoming elections, we will replace Netanyahu. We will thank him for the positive things he has done, wish him luck in trial, and offer our earnest hope that he be exonerated.

No one in the State of Israel is above the law. The prime minister is an elected official, the first among equals, not a ruler who is above the people, the law or the criminal justice system.

It is time to stop the deterioration, to leave corruption, fear, and hatred behind, and set Israel on a new course.

The above is adapted from a speech delivered at Kfar Maccabiah, January 1, 2020

ABOUT THE AUTHOR
Lt. Gen. (res.) MK Benny Gantz is chairman of the Blue and White party and a candidate for prime minister 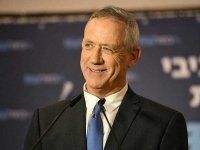