Is Trump widening a rift between the evangelicals and Mideast Christians?

WASHINGTON (RNS) — When President Donald Trump announced in December he would recognize Jerusalem as the capital of Israel and call for the U.S. embassy to be moved there, some of his loudest cheerleaders were American evangelicals. 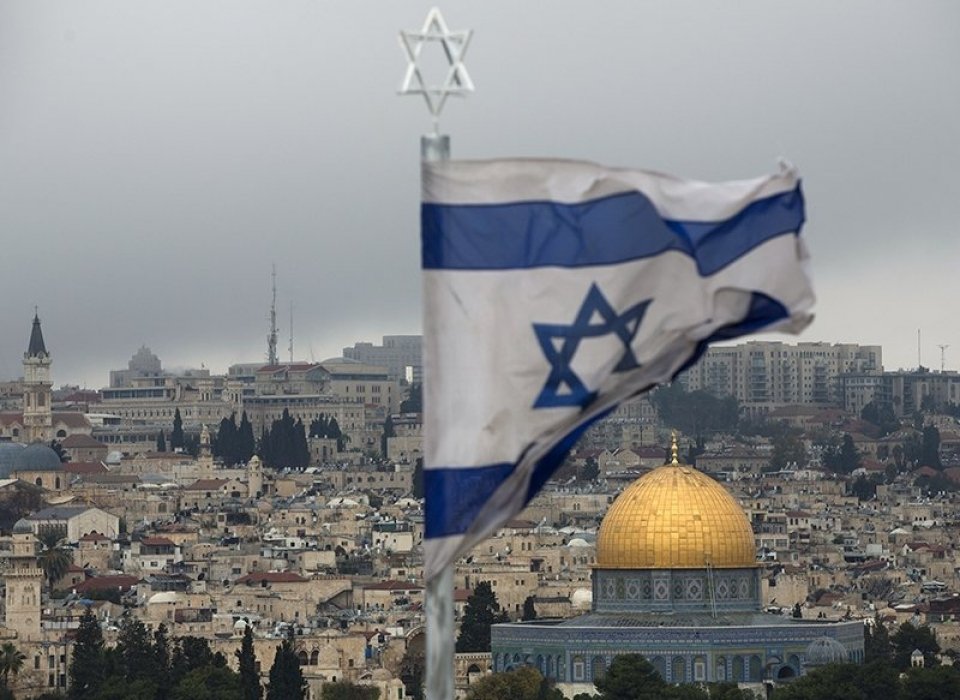 A view of the Dome of the Rock and Jerusalem’s Old City seen from Mount of Olives, on Dec. 6, 2017. President Trump recognized Jerusalem as Israel's capital on Dec. 6, and instructed the State Department to begin the multi-year process of moving the American embassy from Tel Aviv to the holy city. (AP Photo/Oded Balilty)

Members of Trump’s unofficial evangelical advisory board were consulted on the decision, evangelical-led groups such as Christians United for Israel advocated for the change, and conservative Christian leaders such as Jack Graham were quick to applaud the move on Twitter.

But the faith-fueled praise overshadowed a possible consequence: Namely, an escalation of simmering tensions between Middle Eastern Christians — especially those living in the occupied Palestinian territories — and American evangelicals seeking to balance hard-line support for Israel with concern for their fellow faithful.

More specifically, the move appears to make an already delicate existence even more complicated for Palestinian Christians, who make up around 2 percent of the population of the West Bank and less than one percent of the Gaza Strip, according to the CIA’s World Factbook.

Palestinians claim Jerusalem as the capital of the state for which they seek U.N. recognition, and resent Trump’s decision to change American policy, which had held that the city’s status should be determined during peace negotiations between Palestinians and Israelis.

Although the Jerusalem announcement was celebrated by Israelis such as Prime Minister Benjamin Netanyahu, it also sparked widespread condemnation among Palestinians and faith leaders across the globe. Muslim groups, the head of the Union for Reform Judaism, and Pope Francis were all quick to express reservations about the decision or its timing, which many described as hindering peace efforts between Palestinians and Israel. But some of the most dramatic faith-rooted pushback came from the region’s dwindling Christian population.

A group of Jerusalem churches issued a letter in the lead-up to the decision arguing that recognizing the city as Israel’s capital would cause “irreparable harm.” Shortly after the announcement, the Palestinian Christian mayor of Bethlehem — a  city in the occupied West Bank where the biblical Jesus was said to have been born — ordered Christmas lights to be turned off for several days in protest.

Lights in Ramallah were similarly darkened, and the mayor of Nazareth — where Jesus is said to have grown up — threatened to cancel some Christmas celebrations (they were ultimately allowed to continue, according to Public Radio International).

The backlash spread outside of the region, creating an awkward geopolitical situation for Vice President Mike Pence. The leader of Egypt’s Coptic Church, Pope Tawadros II, abruptly canceled a planned late-December meeting with the vice president after the announcement, saying in a statement the Jerusalem decision “did not take into account the feelings of millions of Arab people.”

The White House subsequently delayed the trip until 2018, only to postpone it again last week. Officials announced on Monday (Jan. 8) that it would be rescheduled for late January — but this time without any mention of the previously planned meeting with Tawadros or visit to Bethlehem.

What many saw as a religious snub was likely uncomfortable for Pence, who is popular among American evangelicals and often touts his faith in speeches. The vice president listed the struggle of Middle Eastern Christians as a focus of his delayed trip in an October speech to the advocacy group In Defense of Christians, saying, “now is the time to bring an end to the persecution of Christians and all religious minorities.”

Recent years have seen other evangelical leaders highlight the plight of Palestinians and persecuted Middle Eastern Christians, who face everything from unfriendly neighbors to tensions with Hamas in the Gaza Strip to mass killings perpetrated by the group known as the Islamic State in Egypt. Johnnie Moore, top right, stands behind President Trump as he talks with evangelical supporters in the Oval Office at the White House. Photo courtesy of Johnnie Moore

One of the most visible evangelical advocates for the cause is Johnnie Moore, a former vice president of Liberty University whose most recent book, “The Martyr’s Oath: Living for the Jesus They’re Willing to Die For,” focuses on the issue.

As one of Trump’s many evangelical advisers consulted on the Jerusalem decision, he has also publicly defended the move. He said the blowback among Palestinians who share his faith doesn’t tell the whole story in a region of notoriously complex politics.

“There are actually Palestinian Christians who are open-minded to this decision who are not able to express that, because they feel they would be vulnerable to discrimination in their communities,” said Moore, who also serves on an IDC advisory committee. “There are lots of people who, if they have a different point of view, would not feel free to express that different point of view.”

Philippe Nassif, Executive Director of In Defense of Christians (IDC), during the group’s 2017 Summit. Photo courtesy of IDC

But Philippe Nassif, executive director of IDC, suggested frustration among Palestinian Christians is real. He said his organization, which corresponds with a diversity of Christian traditions, has worked to inform members of Congress and the Trump administration about the possible impact of the decision.

“We have emphasized (to lawmakers) that this decision might have some repercussions for Christians in the region, especially Palestinian Christians who are really upset,” Nassif said. “We’ve advised the administration to tread very carefully — they’ve been very supportive of these communities. … A decision like this could really set them back in the eyes of Palestinian Christians.”

Meanwhile, Palestinian Christians and their advocates remain publicly critical of the decision. James Zogby, president of the Arab American Institute who served on the U.S. Commission on International Religious Freedom from 2013 to early 2017, argued that the outrage stems from a sense of solidarity among Palestinians irrespective of faith. “Palestinian Christians have always seen themselves as part of a Palestinian community — not separate from, but tied to, the fate of the rest of the Palestinian community,” said Zogby, the son of Lebanese Christian parents. “They have also felt that they have been ignored, slighted, and maybe at times treated as less-than-Christian by their co-religionists in the West.”

Zogby’s criticism was echoed by Wadie Abu Nassar, a Catholic political analyst and adviser to the Assembly of Catholic Ordinaries of the Holy Land who spoke to Religion News Service on behalf of the International Center for Consultations — his think tank in Haifa, Israel.

“Christians in the Middle East, the vast majority of them, believe American evangelicals have crocodile tears,” Abu Nassar said in a phone interview. “The American evangelicals, if they really care about Christians (in the region), should boost better understanding between the U.S. and its Arab neighbors — not become part of the problem.”

Spats between Middle Eastern Christians and prominent American evangelicals over Israel have flared up before.

In 2014, Texas Republican Sen. Ted Cruz, R-Texas  — an evangelical Christian — spoke before a group of Middle Eastern Christians during an IDC summit in Washington, D.C. The crowd applauded when the senator condemned groups such as ISIS, al-Qaida, and Hamas, but things took a sharp turn when he declared “today, Christians have no greater ally than the Jewish state.”

More recently, Bethlehem’s mayor, Anton Salman, penned a scathing op-ed in October criticizing the enthusiastic support for Israel among American evangelicals. The piece — published in the Israeli newspaper Haaretz and entitled “Why Are U.S. Christians Celebrating Israeli Policies Strangling Jesus’ Birthplace?” — decried both the occupation of the Palestinian territories and U.S. Christians he says support it, saying, “fundamentalist theological positions are used to justify injustice.” American and Israeli flags flutter in the wind May 17, 2017, atop the roof of Jerusalem’s King David Hotel, ahead of President Trump’s visit to Israel. Photo by Ronen Zvulun/Reuters

Nassif said the IDC is working to educate conservative Christians in the United States about how to address such rifts, saying, “We’ve worked hard to message to evangelicals to say, look, Christians in the Middle East are, to say the least, between a rock and a hard place.”

He also noted that anger over the Jerusalem decision was ultimately less than expected, and argued that proxy wars in the Middle East between Iran and Saudi Arabia are “far more damaging to Christians in the region than anything else.”

The lasting impact of Trump’s Jerusalem announcement remains unclear, and Moore insists he hasn’t seen it impact his communication with Christians in the Israeli-occupied territories. But Moore and Nassif agreed that when it comes to relations between American evangelicals and Middle Eastern Christians, many tasks remain unfinished.

“There has always been this lack of understanding between the communities, and that is still a work in progress,” Moore said. 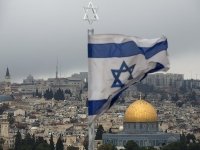