Imagine you had a Palestinian child—could you support the "2-state solution?" 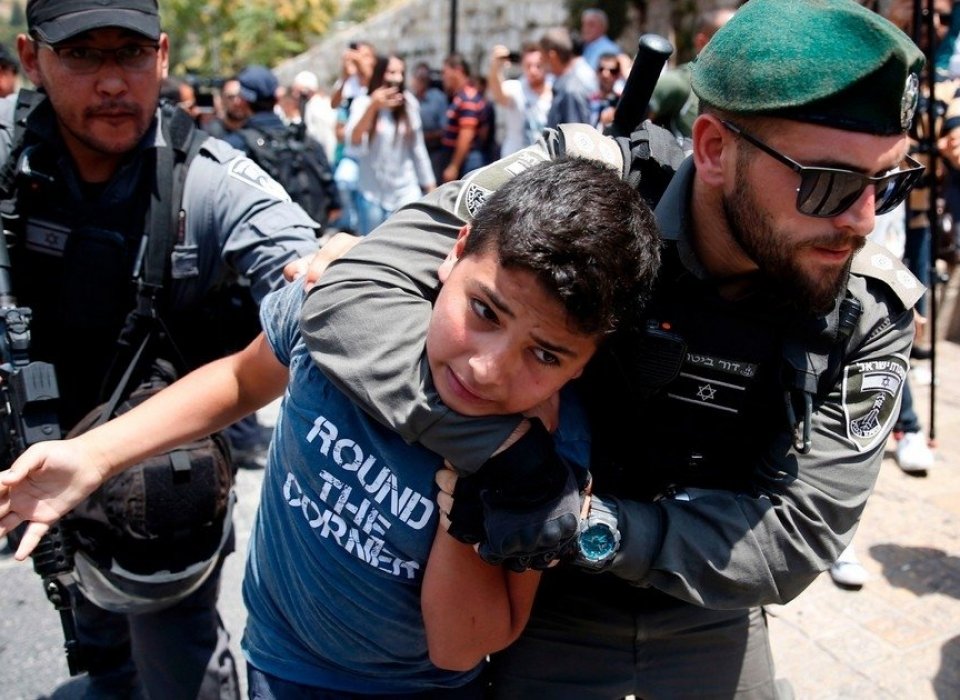 Israeli border guards detain a Palestinian youth during a demonstration outside the Lions Gate, a main entrance to Al-Aqsa mosque compound, due to newly-implemented security measures by Israeli authorities which include metal detectors and cameras, in Jerusalem's Old City on July 17, 2017. (Photo: Ahmad Gharabli/AFP via Getty Images)

Maybe you remember this photo that went round the world four years ago. A Palestinian boy was accused of stonethrowing and marched away blindfolded by a dozen soldiers in Hebron. Fawzi al-Junaidi was 16 and spent three weeks in detention. You can imagine how that experience scarred him.

The amazing thing about the photo is that it's four years old, and nothing has changed in the occupied lands that are supposed to be a Palestinian state. The situation only gets worse. What happened to Fawzi al-Junaidi happens to other children all the time. Because it's Israel's only answer to protesters demanding rights.

The Netanyahu government gives way to the Bennett government, which includes liberal Zionists, and the policies are the same. Because the politics of a besieged Jewish homeland are rightwing nationalist and militarist, forever.

The Trump administration is replaced by the Biden administration with liberal Zionist backing and the policies are almost as bad as Trump. Biden will clearly spend No political capital on this issue, which he regards as a giant loser politically.

So American politicians say nothing as Israel builds more Jewish-only settlements where the Palestinian state was supposed to go and cordons off Jerusalem from the West Bank so there can never be a Palestinian capital there.

Palestinian children are raised with no rights in the occupied territories and no freedom to go to the seashore 15 miles away, or Jerusalem, and Betty McCollum can only get 30 signatures on her bill to remove American funding from Israeli programs that punish children. Israel still counts on the Democratic Party to support it till the Capitol would crumble and fall, as Nancy Pelosi said three years ago. Because she and Biden see the Israel lobby as a pillar of the Democratic Party.

The good news of the last year is that the grass roots continue to march on Washington. The Palestinian solidarity movement is chalking up victories all over America except in the halls of Congress. Even the recruits of the Israel lobby—young Jews under 40—say Israel practices apartheid.

Anyone with a conscience and two eyes understands what a cruel joke the two-state solution is. It is a neverending promise to Palestinians that if you just behave yourselves some day we will be able to promote the idea of sovereignty for you. Not yet! Not now! And meanwhile Israel will continue to swallow up your lands and push you off them, and America will give Israel $4 billion a year. Anyone who has visited Palestine can tell you, there will never be a two-state solution: There are 700,000-plus Jewish settlers living on the choice hilltops inside occupied Palestine and spreading by the minute. Maybe the most important media breakthrough of last year was when the Washington Post (finally) sent three reporters through the West Bank and East Jerusalem to show that a Palestinian state is more of a fantasy than ever. And 330 Palestinians were killed by Israel in occupied territories last year. Because that's Israel's only answer to the demand for freedom.

Liberal Zionists cling to the idea of a two-state solution because they recognize that the alternative is a struggle for equal rights under apartheid that will only end, as the South African struggle did, with one democratic state. They don't want that, because they see Jewish sovereignty as a great and necessary good in a world that's unsafe for Jews. A secure homeland for the Jewish people… That's a generational belief, it's dying out by the minute.

But liberal Zionists have been successful in creating a firewall around Washington and New York. "[T]he Democratic party at least remains almost totally united in support of two states," as J Street says. In the U.S. establishment, it is still verboten to say the truth about Israel, that it practices apartheid. It is still the only democracy in the Middle East, and the only real debate is whether you want to try to put pressure on Israel to improve the Palestinian conditions so that the two-state solution doesn't become officially dead or just continue to love Israel no matter what it does. J Street maintains the left pole of that discussion, pushing for "restricting" aid that is used to confiscate more land, and pushing a two-state solution act in Congress. But in the end it is hard to see how that position is any different from "managed conflict," the mainstream Zionist idea of clamping down on Palestinian resistance to their rightslessness forever.

I wonder if this is the year when the two-state solution finally dies in Washington. That is the ballgame, when the grassroots finally overwhelm the establishment delusion. When liberal Zionist gatekeeper organizations like Americans for Peace Now and J Street finally say the truth that every other progressive is now in on: Israel practices apartheid.

Friends ask me whether the Palestinian solidarity movement should just ignore the leftleaning part of the Israel lobby and organize among progressives, or reach out to the liberal Zionists. I tell them I believe in active engagement with that community, even in a critical way, because I think the lobby is ultimately so powerful in Washington. So shearing off liberal Jews will undermine the liberal Zionist lobby in the end and force a reckoning in our politics.

I know my tone is inconsistent. Sometimes I am hectoring, sometimes I am mocking, because I am so impassioned, and because I have seen apartheid for myself and I think it is an urgent moral matter to bring it down.

But sometimes I am beseeching. Many of us are privileged in this country. I ask all those who support the two-state solution to consider. It's been four years since Fawzi al-Junaidi was photographed being muscled in that brutal way. Now he's 20, and younger boys are taking up protests against their bleak future, and many of them have been shot and killed. If these were your children, could you in good conscience support a two-state solution of false promises? I am sure the answer is No.

Philip Weiss is Founder and Co-Editor of Mondoweiss.net. 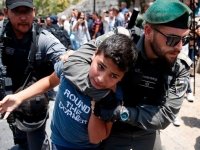