Christian Prophets Are on the Rise. What Happens When They’re Wrong?

They are stars within one of the fastest-growing corners of American Christianity. Now, their movement is in crisis. 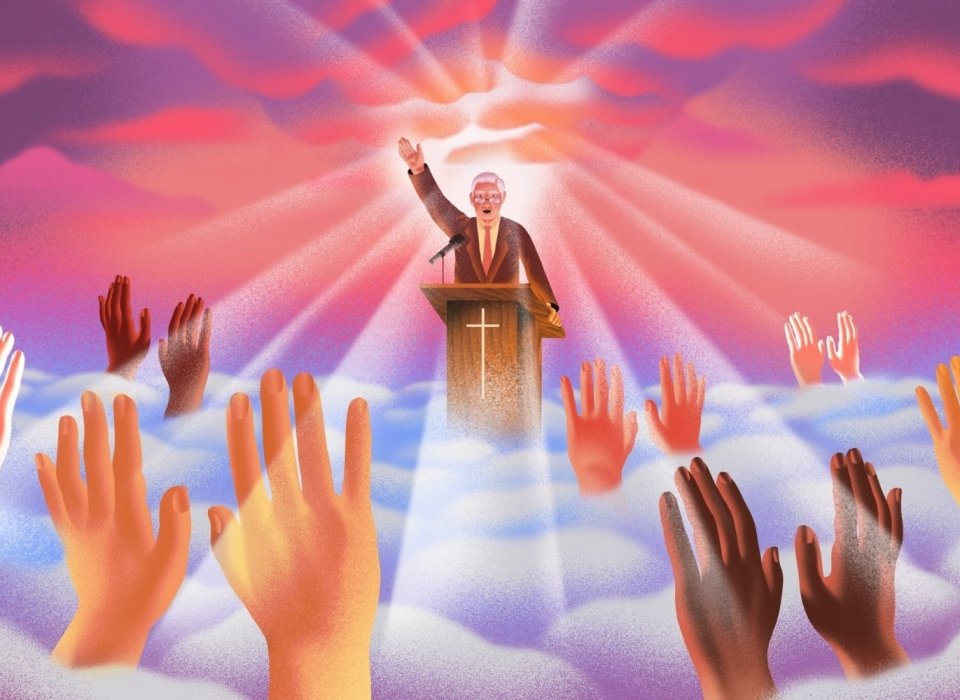 Jeremiah Johnson, a 33-year-old self-described prophet, was one of the few evangelical Christians who took Donald J. Trump’s political future seriously back in 2015.

This track record created a loyal audience of hundreds of thousands of people who follow him on social media and hang on his predictions about such topics as the coronavirus pandemic, the makeup of the Supreme Court, and the possibility of spiritual revival in America. And they took comfort ahead of the presidential election last fall when Mr. Johnson shared a prophetic dream of Mr. Trump stumbling while running the Boston Marathon, until two frail older women emerged from the crowd to help him over the finish line.

So when Joseph R. Biden Jr. was certified as the winner of the election, Mr. Johnson had to admit he had let his followers down.

“I was wrong, I am deeply sorry, and I ask for your forgiveness,” he wrote in a detailed letter he posted online. “I would like to repent for inaccurately prophesying that Donald Trump would win a second term as the President of the United States.”

The desire to divine the future is a venerable one, fueling faith in figures from ancient Greek oracles to modern astrologists. Christianity in particular is a religion whose foundational text is filled with prophecies proven true by the end of the book. Whether the gift of prophecy continues into the present day has long been the subject of intense theological debate. But in recent years, self-described prophets have proliferated across the country, accelerating in stature over the course of the Trump era. They are stars within what is now one of the fastest-growing corners of Christianity: a loose but fervent movement led by hundreds of people who believe they can channel supernatural powers — and have special spiritual insights into world events.

Many are independent evangelists who do not lead churches or other institutions. They operate primarily online and through appearances at conferences or as guest speakers in churches, making money through book sales, donations and speaking fees. And they are part of the rising appeal of conspiracy theories in Christian settings, echoed by the popularity of QAnon among many evangelicals and a resistance to mainstream sources of information.

The prophetic imagination roams far beyond national politics. It follows the Super Bowl and the weather; it analyzes events in pop culture, like Kanye West’s recent turn toward evangelism, and global events, including a particular fascination with Israel. Many prophets caution followers against trusting what they read in the news, but in its place they offer a kind of alternative news cycle, refracting and interpreting events in the real world through a supernatural lens.

“In my lifetime — 49 years as a follower of Jesus — I’ve never seen this level of interest in prophecy,” said Michael Brown, an evangelical radio host and commentator, who believes in prophecy but has called for greater accountability when prophecies prove false. “And it’s unfortunate, because it’s an embarrassment to the movement.”

The past year has been riddled with prophecies that did not pan out. As the coronavirus swept the United States in the spring, several prophets issued public assurances that it would decline by Passover; Cindy Jacobs, one of the most influential American prophets, led a global day of prayer to “contain” the virus in March. And by the fall, so many prominent prophets had incorrectly predicted the re-election of Mr. Trump that the apologies and recriminations now constitute a crisis within the movement.

The backlash to Mr. Johnson’s apology was immediate. On Facebook, he reported that he received “multiple death threats and thousands upon thousands of emails from Christians saying the nastiest and most vulgar things I have ever heard toward my family and ministry.” He also said he had lost funding from donors who accused him of being “a coward, sellout, and traitor to the Holy Spirit.”

But the popularity of self-appointed prophets shows no signs of waning.

As denominational Christianity declines almost across the board, magnetic independent leaders have stepped into the void. “There’s this idea that you can’t trust anybody except these trusted individuals,” said Brad Christerson, a sociologist at evangelical Biola University. “It’s a symptom of our time. People don’t trust institutions, and people think that all mainstream institutions are corrupt: universities, science, government, the media. They’re searching for real sources of truth.”

The result is that many congregations are awash in misinformation. Almost half of Protestant pastors frequently hear members of their congregations repeating conspiracy theories about current events, according to a survey released last month by Lifeway Research, which is affiliated with the Southern Baptist Convention.

Prophecy is a facet of the fast-growing charismatic Christian movement, which has an estimated half-billion followers worldwide and is characterized in part by the belief that the “gifts of the spirit,” which also include speaking in tongues and supernatural healing, continue into the present day, rather than being an artifact of biblical times.

Mr. Trump supercharged the public profile of this already ascendant stream of Christian culture. His evangelical advisory council included unprecedented numbers of charismatic leaders, including his primary faith adviser, Paula White, a charismatic pastor and televangelist. A few weeks before the 2020 election, he attended services for the third time at a “healing, prophetic” megachurch in Las Vegas, where speakers shared predictions and visions about his second term, to applause from Mr. Trump and the congregation. (The charismatic movement over all is notably multiracial, although the most successful politically oriented prophets of the Trump era were white and appealed to an audience that resembled Mr. Trump’s base.)

Christian prophets are meeting a hunger for reassurance and clarity that can be observed in other corners of American culture. Astrology is exploding in popularity. More than 40 percent of Americans believe in psychics, according to Pew.

Prophecy, similarly, is not only a predictive tool, but an analytical lens for making sense of the past and current events. The most successful prophets can connect seemingly disparate pieces of data in a grand narrative, adding new layers of interpretation as events unfold and inviting others to contribute.

In Crystal River, Fla., Scott Wallis had read Mr. Johnson’s prophecies on Facebook and was encouraged by them. He trusted Mr. Johnson in part, he said, because of two recent prophecies that had proven true, including one about the Los Angeles Dodgers winning the World Series. (Mr. Johnson reported the prophecy two days before the team clinched the championship.)

For Mr. Wallis, a pastor and prophet himself, it made perfect sense that God would be involved in the outcome of the American election, just as he is involved in every human life. “Some people, like deists, believe God created the earth but abandoned the people and left them alone,” Mr. Wallis said. “I don’t believe that.” When a friend prophesied to him in 2014 that he would soon marry, he did not even have a girlfriend, but he was married by the end of the year.

The internet has made it much easier for prophets to disseminate their visions, with many more outlets at their disposal: social media, podcasts, books and a traditional media ecosystem that remains largely under the radar even to many other evangelicals. An appearance on “It’s Supernatural!,” an interview show hosted by the octogenarian televangelist Sid Roth, can be career-making for prophets. So can an endorsement from the venerable Elijah List newsletter, which claims 240,000 subscribers. Charisma magazine and the Christian Broadcasting Network both cover prophetic predictions as news.

Jennifer Eivaz, who calls herself “the Praying Prophet,” realized in college that she could hear God’s voice in a way she could “prove out.” When she and her husband started to lead a church in Central California, she would have dreams and receive specific information about people who attended. She was careful not to scare people, she said, often opting to check in with them rather than launch into specific predictions or insights into their lives.

She also started recording training videos on prayer and prophecy, which caught the eye of Steve Shultz, who had founded The Elijah List and invited her to contribute. As her profile rose, she became an internationally sought-after conference speaker at events with names like the Inner Healing and Deliverance Institute and the Prophetic Wisdom & Prayer conference, where believers pay to gather for music, prophecy and inspiration.

Ms. Eivaz occasionally offers public prophecies about national or international events. In May 2015, she announced that the yearslong drought in California was over and that “the rains are coming back.” The message tied together the biblical prophet Elijah’s experience on Mount Carmel; Ms. Eivaz’s recent trip to Carmel-by-the-Sea, Calif.; a vision of a mother bear fighting for her cubs; the California state flag; and Gov. Gavin Newsom. (The drought did not formally end until 2017, although the state experienced unusually high rainfall over the summer of 2015.)

But those kinds of visions come to her only once every year or two, she said. She has watched with alarm as predictive prophecies like these have come to dominate the prophetic movement. “It’s like fact-shopping,” she said, adding that social media rewards “buzz and sensationalism” over wisdom, and pressures independent prophets especially to churn out fresh predictions every few days.

Mike Killion, who was a charter-bus driver in North Carolina until the pandemic dried up his business, pays attention to what he calls “synchronicities,” and others might call coincidences. He believes God is intimately involved in world events, and closely attuned to the prayers of his people.

If Mr. Killion’s phone is on the table and he mentions wanting to go on a cruise, for example, the phone “hears” him and starts offering advertisements for cruises, he said. “God works the same way,” he explained. “He’s listening to everything you say.”

Mr. Killion scoffed at Mr. Johnson for walking back his prophecy about Mr. Trump’s 2020 victory. “Jeremiah Johnson should have kept his mouth shut,” he said a few days before Mr. Biden’s inauguration. “It still may happen.”

Mr. Johnson, for his part, appears to remain chastened. This week, he began a new YouTube series titled “I Was Wrong,” in which he plans to survey what the prophetic movement is, and where, in his view, it has gone awry.

In the first installment, he reviewed some of his past prophecies about politics and national events, and picked apart how he had erred in 2020. “Not everything that God speaks to us privately should have been public knowledge,” he said somberly. “I got caught up in the moment.” He spoke about his hope for “reformation,” and his concerns about God’s judgment to come. And in future episodes of the series, he promised, he will share what God is showing him about what comes next.

Ruth Graham is a national correspondent covering religion, faith and values. She previously reported on religion for Slate. @publicroad 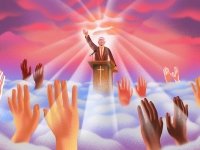