Source: The times of Israel

The Hague, 25 March 2022 | When the current President of Ukraine, Volodymyr Zelensky, Zooms into The Hague on 31 March 2022, our House of Parliament in The Netherlands will warmly, if not jubilantly, welcome him as a global star. Who hasn't heard nor seen him? Of course, we'll give him a standing ovation as has happened in Rome, Washington DC, London, and elsewhere. The women especially like his demeanor and style. President Zelensky might be the only head of state who looks good in T-shirts, notwithstanding Canada's Prime Minister Justin Trudeau, but he doesn't wear T-shirts officially.

But we Dutch are down-to-earth and straightforward, known for our practical, no-nonsense bluntness. We're the 14th wealthiest nation with a population of only 16 million for a good reason. We won't risk our children's future by giving Zelensky what he wants. Most of us are willing to provide the people of Ukraine the shirts off our backs, our right leg even but not full EU membership nor NATO affiliation. Besides, we need Russian oil and gas. Our reserves won't last forever.

So dear Volodymyr, go to Moscow and cut a deal with Vladimir. Before meeting with Vladimir, go to your people and ask, "Do you want to remain cannon fodder and human shields in service of the Free World?" Though most Ukrainians have voted to become part of the EU and NATO, would they have done so if they were apprised to become cannon fodder? Is bloodshed the only way? (see Vladimir and Volodymyr Rulers of Peace by Abraham A. van Kempen).

Let's reason together. May we help? Could you settle for limited open borders with freedom of movement for a select group of Ukrainians to work and live in the European Union? It's a start. It doesn't have to be all or nothing. Why should people die for nothing? The world powers are dangerously at each other's throats. We must get back to square one. Trust is the thrust that moves mountains. It will take several generations to rebuild the bridges that the World Community has burned, conduits that could again become pipelines of progress and peace.

Read more: Zelensky Doesn't Know the End of His Story. Churchill Didn't Either, Published by the New York Times, 24 March 2022.

"In the economic war that has now begun, there may come a time when Europeans and Americans, selfishly horrified by high energy prices and the financial shock caused by the invasion, turn Mr. Zelensky from a heroic Ukrainian resistance fighter into a stubborn blockage to a necessary endgame.

He may emerge as the triumphant leader of a still independent Ukraine, a world figure to set alongside Gandhi and Mandela. Or there may yet be a much darker ending.

For all the army's failures, the Russian military advantage remains enormous. The day may come when Mr. Zelensky has no escape from the Russians coming after him.

Churchill would have understood that as well. A few days before addressing the Commons, he spoke to colleagues in the cabinet about not giving in until he was lying on the ground, choking in his blood.

In the nature of courageous leadership, you don't know the end of the story when you utter your memorable — and perhaps decisive — words." 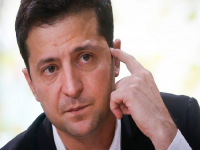