A Palestinian perspective on the U.S. election PALESTINIANS WALK PAST MURAL THE U.S. PRESIDENT DONALD TRUMP, IN GAZA CITY ON NOVEMBER 4, 2020. PRESIDENT DONALD TRUMP AND DEMOCRATIC CHALLENGER JOE BIDEN ARE BATTLING IT OUT FOR THE WHITE HOUSE, WITH POLLS CLOSED ACROSS THE UNITED STATES — AND THE AMERICAN PEOPLE WAITING FOR RESULTS IN KEY BATTLEGROUNDS STILL UP FOR GRABS. PHOTO BY MAHMOUD AJJOUR

Last week witnessed the election of a new American president. Elections in the U.S. can have massive impacts across the world. So, what do the results mean for us Palestinians?

Donald Trump’s administration was undoubtedly the most far-reaching in its complete adoption of an agenda favoring Israel’s right-wing settlers occupying Palestinian territory in the West Bank. Is Joe Biden going to be any different?

That is what was raised by most Palestinians over the past few days, and just as often the response was to shrug off the question.

Endless Israeli-Palestinian negotiations have so far not led anywhere in spite of numerous visits by U.S. secretaries of state and peace envoys to the region. And every single time, Palestinians were faulted for the failure of the talks. Whenever high-level talks ensue, the Palestinian leadership is expected to respond positively to any new initiative made by whatever American president is in office, in spite of the continuing hermetic, medieval siege imposed on Gaza. The siege has so far led to the death of dozens of critically ill patients who were not able to receive treatment locally.

In the West Bank there are around 100 checkpoints slicing communities, and the ever growing apartheid wall that expropriates more and more Palestinian land.

There are around 4,500 Palestinian political prisoners including 40 women and 170 children. These are but a few examples of the horror inflicted on Palestinians. We know that any American initiative will not discuss these major issues that characterize the Palestinian question. And, likely, no initiative will seek what was once the standard for an agreement: the withdrawal of Israeli forces to the 1967 borders, support of the right of return for Palestinian refugees and recognition of East Jerusalem as the capital of Palestine.

Indeed, no American administration has been an honest broker in the conflict. On the contrary, the U.S. has always shown a pro-Israel slant. Washington rarely exercised its leverage to make any substantive progress toward achieving peace based on justice during Barack Obama’s presidency. Instead, in 2016 the Obama administration gave Israel $38 billion in military assistance over a decade, the largest such aid package in U.S. history. And at the peak of campaign season that same year, both Democrats and Republicans competed to see who could be most strident in defense of the Jewish State.

The Trump administration then cut funds to the Palestinian Authority, closed the Palestinian Mission in Washington, de-funded UNRWA, the UN agency for Palestinian refugees. If Biden reverses all of these measures, it does not mean the end of the conflict.

If Biden is serious about creating a comprehensive peace in the Middle East by resolving the Palestinian question, he cannot and should not ignore the right of return of 6 million refugees scattered all over the world. Nor can he take the promises of Benny Gantz and Benjamin Netanyahu seriously. If the Palestinians decide to go back to the negotiating table and resume security coordination with Israel without fundamental changes to the paradigm, they will prove that history is repeating itself as both tragedy and farce. A heavy price is going to be paid, again.

We should send a strong message to the new administration that the rules of the game have changed, and that we Palestinians will return to the negotiating table only after Israel abides by international law. First, it must withdraw troops from the lands it occupied in 1967, second, it should revoke discriminatory basic laws including the Nation State Law, and third,  it should implement United Nations resolution 194, allowing for the return of Palestinian refugees.

These were once the benchmark of what was needed to secure an independent state of Palestine alongside Israel, yet Israel has never responded positively to these parameters. Today, these basic steps and the path of a two-state solution is essentially dead and the only democratic alternative should be put on the table: a secular, democratic state for all. Now is the time for a state for all of its citizens regardless of religion, ethnicity, and sex. Surely, our natural progressive allies within the Democratic party can play a role in exerting pressure on their leadership in this regard.

The Biden-Harris administration should be reminded by the Palestinian leadership, day and night, of its responsibilities. The left-wing of the Democrats who helped secure Biden’s win are the same activists who support Palestinians. Tapping into this base could shape the direction of the next administration’s policy in the region. Are we up for it? 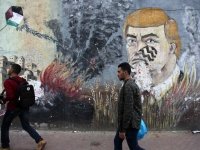