2021 in Palestine: A new generation has finally risen 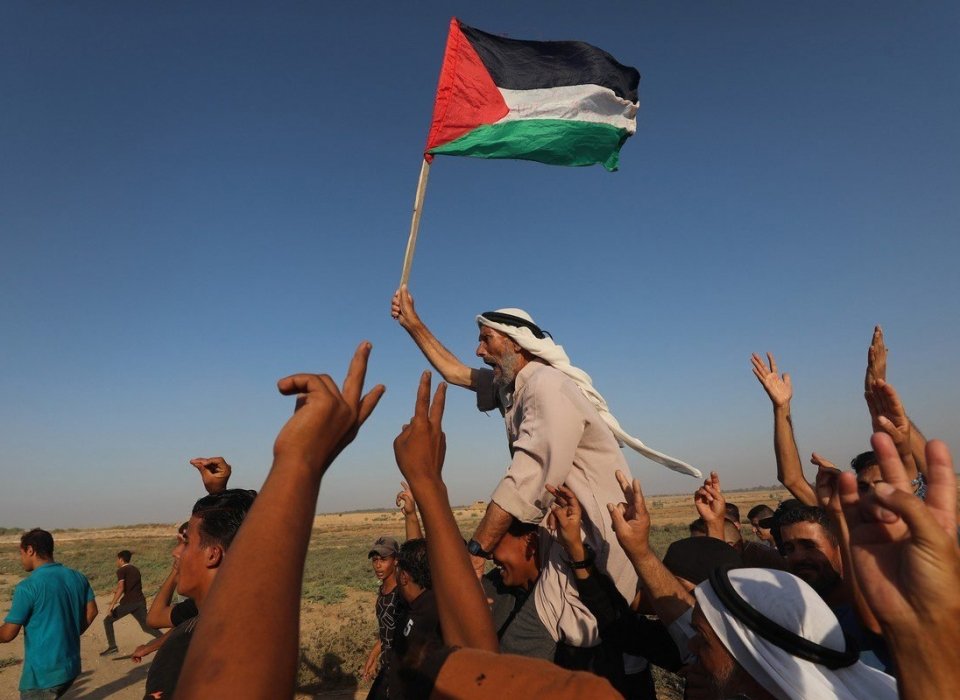 At the onset, 2021 appeared to be another ordinary year, one of unrelenting Israeli occupation and continued Palestinian misery. While much of that remained true, the dynamics of the Israeli occupation of Palestine were challenged by an unprecedented sense of popular unity among Palestinians, not only in the occupied East Jerusalem, the West Bank and Gaza, but among Palestinian communities in historic Palestine as well.

A prevailing sense of cautious hope has finally replaced the prevalent sense of despair felt in previous years. With that, a feeling of renewal and willingness to embrace new political ideas has been registered throughout Palestine. For example, according to a poll conducted by the Jerusalem Media and Communication Centre (JMCC) and published on 22 November, there are more West Bank Palestinians who support the one-state solution than those who still support the practically defunct two-state solution, which dominated Palestinian thinking for decades.

The year, however, began with a focus on something else entirely: the Covid-19 pandemic. Aside from ravaging besieged and occupied Palestinians, especially in the Gaza Strip, the pandemic began spreading among Palestinian prisoners.

In February, the Palestinian Authority, along with international human rights groups and organisations, criticised Israel for blocking access to Covid-19 vaccines to the besieged Gaza Strip. The Sputnik 5 vaccines were donated by Russia, the first country to contribute to fighting the pandemic in Palestine. Eventually, Palestinian communities slowly accessed vaccines arriving from the COVAX program. However, the pandemic continued to ravage occupied Palestine, especially as the Israeli occupation authorities continued to block Palestinian preventative measures and to dismantle makeshift Covid-19 facilities in the occupied territories. According to the website Worldometer, 4,555 Palestinians died as a result of Covid-19, while 432,602 were tested positive for the deadly pandemic.

As happened in the previous year, Israel's political crisis quickly dominated the headlines, as the power struggle between the then Israeli Prime Minister, Benjamin Netanyahu, and his rivals continued, leading to Israel's fourth elections within two years. The elections in March have finally changed the Israeli political landscape, thanks to a strange government coalition cobbled up by Israel's new Prime Minister, Naftali Bennett, on 13 June. The coalition included Arab politician, Mansour Abbas, whose political party proved instrumental in the forming of the government.

Another attack on Gaza: Israel squeezing the life of Gaza – Cartoon [Sabaaneh/MiddleEastMonitor]

While Netanyahu and his Likud party quickly retreated to the opposition, ending a reign spanning over 12 years, Palestinians anticipated their own elections, which were announced by PA President Mahmoud Abbas on 15 January.

The PA parliamentary and presidential elections were scheduled for 22 May and 31 July, respectively. The two rounds of voting were meant to be followed by a political arrangement that would end Palestinian political disunity by ensuring equal representation for all Palestinian political groups, including Hamas and the Islamic Jihad, in a revitalised Palestine Liberation Organization (PLO).

Unfortunately, none of this has transpired. Despite positive Palestinian unity talks in Cairo over the course of several weeks, Abbas cancelled the scheduled elections, under the pretext that his decision was made in protest of Israel's refusal to allow Palestinian voters in East Jerusalem to participate.

In exchange for blocking Palestinian efforts at ensuring a semblance of democracy, even under Israeli occupation, Abbas was allowed to return to Washington's list of allies. Indeed, the US resumed its financial aid to Palestinians in April, promising to re-open the PLO office in Washington, which was shut down by the Trump Administration and also pledging to re-open its own consulate in Jerusalem, which was also closed by Trump in September 2018.

Despite these gestures, which served to validate the PA again, after four years of complete marginalisation by the US, the new Biden Administration offered neither a roadmap for a renewed peace process nor pressured Israel to end its occupation or to slow down the pace of illegal settlement expansion in occupied Palestine. In fact, the rate of Israel's settlement construction has grown exponentially in 2021, with the announcement of Israel's plan to approve thousands of new Israeli housing units in the West Bank, in October.

From Sheikh Jarrah to Gaza

Israel's provocative actions would have gone unnoticed by the international community if it were not for the Palestinian people who took a collective stance, using all forms of resistance, from Sheikh Jarrah, in East Jerusalem, to Gaza. The whole episode, which eventually led to an Israeli war on Gaza in May, began with a routine Israeli attempt at ethnically cleansing Palestinians from several East Jerusalem neighbourhoods, including Sheikh Jarrah and Silwan. Palestinian Jerusalemites, however, began organising against an Israeli court order to evict them from their homes, to be then taken over by Israeli Jewish settlers, as has been the habit for many years.

The popular resistance in Sheikh Jarrah was met with extreme Israeli violence, involving armed settlers, Israeli police and occupation forces, leading to the wounding of at least 178 Palestinian protesters on 7 May. Palestinians throughout the occupied territories began mobilising in solidarity with their brethren in Al-Quds, leading to another devastating Israeli war on the Gaza Strip on 10 May. The war resulted in the killing of over 250 Palestinians, thousands more wounded and mass-scale destruction.

The Israeli war was meant to distract from the events taking place in East Jerusalem. The Israeli designs, however, completely failed as Palestinians in Ramallah, Nablus, Hebron, Haifa and many other Palestinian towns, villages and refugee camps marched in solidarity with Sheikh Jarrah and Gaza, articulating a political discourse which, for the first time, was devoid of factional references.

To quell the Palestinian rebellion, Israel dispatched thousands of soldiers and police, along with armed Jewish settlers and militias in the occupied territories and Israel itself. Many Palestinians were killed in resulting clashes and attacks. The May events, however, have highlighted, not only the unity existing among Palestinians but also the deep racism that has afflicted all sectors of Israeli society. The notion that Palestinians of historic Palestine have assimilated with the new reality and are no longer part of a larger Palestinian body politic, proved completely false.

Boycotts, Divestments and the ICC

The Palestinian resistance at home further mobilised civil society around the world. Rights organisations like Human Rights Watch and Israel's own B'tselem concluded that Israel is an apartheid state.

The Boycott, Divestment and Sanctions (BDS) movement received many boosts throughout the year as companies, such as the ice cream giant, Ben & Jerry's, decided to divest from the occupied territories and the sport's multinational corporation, Nike, has decided to end its operations in Israel entirely, though without rationalising its decision on political grounds.

Additionally, Norway's largest pension fund, KLP, declared on 5 July that it would no longer invest in firms linked to Israeli settlements. Later in the year, famous Irish novelist, Sally Rooney, announced her refusal to have her bestseller 'Beautiful World, Where Are You' published by an Israeli company.

Meanwhile, efforts at holding Israeli war criminals accountable at the International Criminal Court (ICC) continued, unabated. In March, then ICC Chief Prosecutor, Fatou Bensouda, announced the opening of a formal investigation into alleged war crimes in the occupied Palestinian territories. Although Bensouda is no longer at the ICC, the Palestinian case remains active, with the hope that international justice can finally prevail.

Despite the numerous difficulties, the spirit of all Palestinians was lifted, once more, when the Palestinian Olympic delegation entered Tokyo's Olympic Stadium in July, carrying a Palestinian flag. The small delegation included Palestinians from various regions, cementing Palestinian unity in culture and sports as well.

Meanwhile, Palestinian hunger strikers continued their resistance inside Israeli prisons, with prisoners like Kayed Fasfous and Meqdad Al-Qawasmi leading prolonged hunger strikes of 131 and 113 days, respectively, almost resulting in their deaths. In a show of further defiance, six Palestinian prisoners had escaped the Gilboa prison on 6 September. Though they were all caught and reportedly tortured following their re-arrest, the news captivated all Palestinians, who felt empowered with what they perceived to be a heroic quest for freedom.

However, many Palestinian prisoners also suffered at the hands of the PA itself, which continued its practice of unlawful detention and torture of dissenting Palestinian activists. The death of Nizar Banat, at the hands of PA security forces on 24 June, led to mass Palestinian protests where thousands of people demanded accountability and justice for the PA critic who was beaten to death.

2021 was a year of war, loss and destruction for Palestinians. Yet, it was also a year of unity, cultural achievements and hope, as a new generation is finally taking centre stage, asserting its identity and its centrality to the future of its homeland.